Despite having a great love and affinity for the Football Manager series and the past glories of its developer Sports Interactive, reviewing one of its games remains something of a poison chalice. Why? Well, anyone who has played a Football Manager title will be able to tell you just how addictive these games can be. Forget World of Warcraft, Sports Interactive’s football management titles have been destroying peoples’ social and professional lives as far back as 1995, when Championship Manager 2 was released.


Before I get onto why this is, let’s just have quick recap for the uninitiated. Football Manager 2008 is a football management simulation, available currently on PC and Mac. It allows you to take control of any team you like from a selection of 50 different countries, utilising a database of players and staff numbering in the tens of thousands. It gives you control over tactics, team selection, transfers, training, youth policy and all the football aspects of being manager of a team. As all this might suggest, the scale of Football Manager is more or less unprecedented and were one to look on it like this it would be easy to be put off. 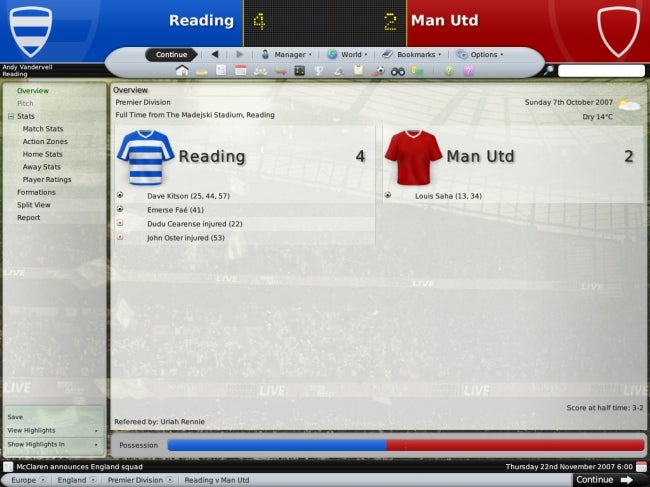 In truth though, as with life, when playing FM2008 you’re only privy to very small slice of this massive environment: a fact that remains a defining strength of the game. Whereas many a competing management game has given you control of all sorts of trivialities, from stadium expansion to advertising hoardings, Football Manager is still thankfully routed in football matters rather than the ever prevalent commercial aspect of the game.


Every new edition of series is followed by a pronouncement as to the number of new features, with the figure generally in the hundreds. There’s little reason to doubt the strict validity of these numbers, but some of the changes are so small you could play the game for weeks and never find them. Better then to focus on the obvious things, which in FM2008 are subtle but really quite important. 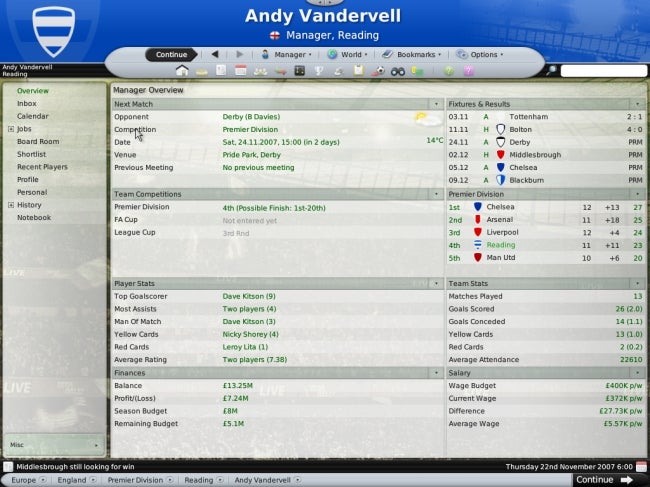 First among these is the interface, which has once again seen something of a makeover. Over the years this has developed to such an extent that the spreadsheet derision of old is completely unfounded. This time around, although the general layout remains much the same, FM2008 is far fresher and easy on the eye.


In addition to the cleaner interface, there’s also a new advisor system that’s intended to help new players through the initial stages. This takes the form of the small box in the bottom right corner, which has context sensitive options that pop up at certain screens. So, for example, if you’re looking at a player’s profile it will ask if you would like to sign the player. It will then guide you through the process, advising you each step of the way. Though experienced players will want to turn it off, it’s a valuable addition for those not so familiar and should help ease people into what can be quite a daunting proposition.

As one would expect, match days are the bread and butter of the Football Manager experience and SI has once again tweaked things to improve what it calls the ‘match flow’. This entails a number of changes, providing a more structured introduction to events by leading you through each stage, beginning with selection, through to a media preview, team talk, and opposition instructions.


In some respects this helps, but if anything there are rather too many hoops to jump through before you can get to the match. Once you do get to the match, another long awaited change is the ability to change tactics on-the-fly instead of having to wait for a gap in play. This is great in theory, however in practice it hasn’t been handled as well as it might. When you do click the Tactics tab you’re greeted by the familiar arrangement, with the addition of a small pitch at the bottom to show you what’s going on. 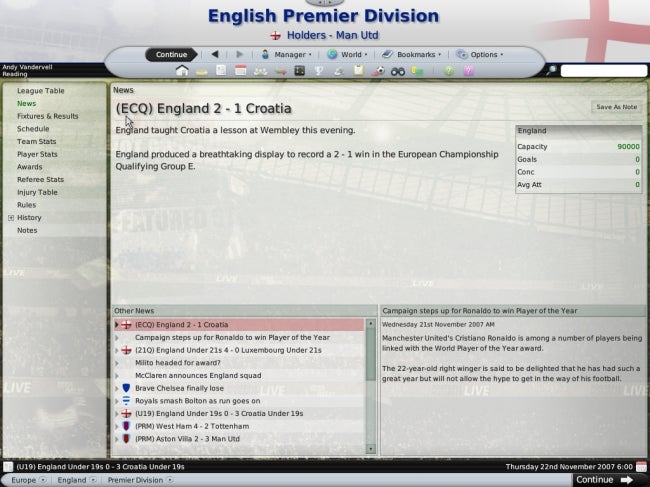 On paper this is fine, but it’s hardly the sea change it ought to and could have been. In reality I found myself entering this screen and then pausing the match, giving me the time to make the changes I wanted without missing anything important. This is because although it’s been made possible to make tactical change in real-time, nothing has been done to streamline the interface to reflect this. Ideally, it would be nice if you could adjust the basic instructions such as attitude and passing style without entering a separate screen, leaving more complicated changes for a new dialog.


Also slightly irksome is the inability to set a default view for each new match. So, for example, I like to use the split view with my player ratings in one pane and match stats in the other but every time a new match begins it takes me straight to the entirely useless match overview screen, necessitating pausing the match every time to set things up as I like them. These little things don’t spoil things too much, but they’re the sort of things I’d expect SI to be sorting out by now. 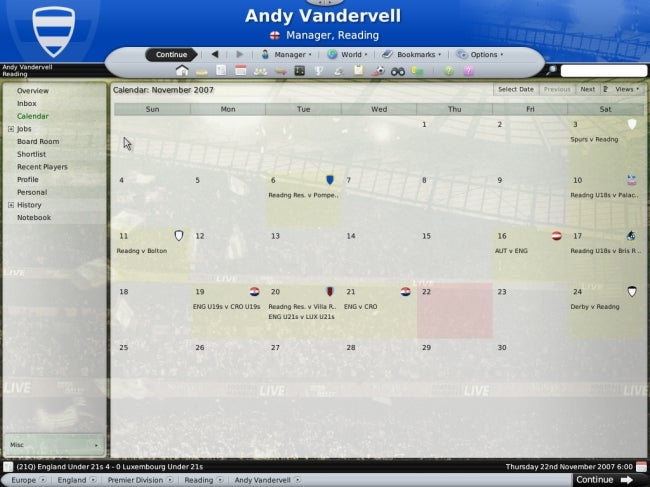 Thankfully, one thing remains constant: that being the sheer brilliance of the game engine. No other management title I’ve played has been able to capture the ebb and flow and emotional troughs that are generated during a game of football. You’ll laugh, you’ll cry, you’ll shout obscenities and jump out of your seat in fury, a mere number cruncher it is not.


Another continuing strength of the game is ability to defer responsibilities. More than ever it’s easy to pick and choose what you want to deal with, allowing you restrict your activities to just match days and the transfers or studiously manage your team’s training schedule down to the man. Of course, the other major attraction is simply the depth and variety of challenge on offer, which hasn’t changed one iota.

Probably the best new addition to the game is the overhaul of the confidence system. In the past it was often difficult to gauge what the board and fans thought of how you were doing, occasionally resulting in being dismissed despite you thinking everything was going well. Such problems have been eliminated, replaced by a plethora of feedback that help keeps you appraised at all times as well as creating a realistic sense of constant scrutiny.


This process begins at the beginning of the season, where you’re able to set your own objectives and aims for the season. Being more ambitious will allow you more funds for transfers and a larger wage budget, but falling below your own aims will result in a significant backlash. As part of the new system you get confidence feedback from both the fans and board, based on long term expectations, competition performance, finance management, signings and individual matches. You’re even told when fans are concerned about individual players, while your own signings come under particular scrutiny. Spend a cool £30 million on a useless mercenary midfielder – *ahem* Ballack – and you can expect not to hear the end of it. 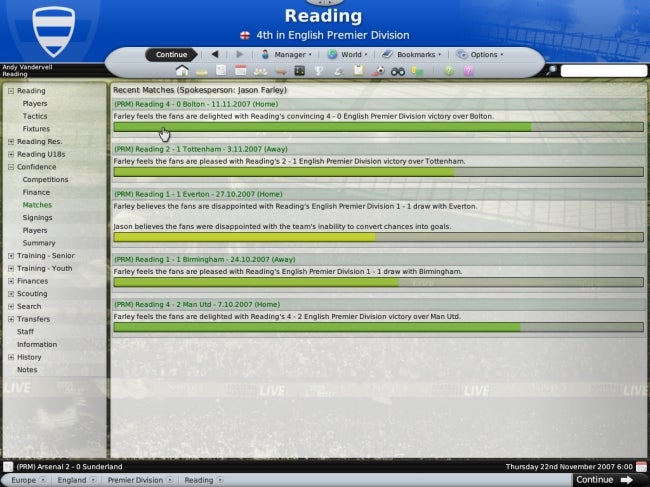 This, for me, is best change in FM2008 but some praise must also be reserved for the overhauled international management system. Now, this part of Football Manager has always been considered the poor relation to the rest of game, much like it is real life really. However, now international management is a good deal easier and more compelling thanks to the inclusion of a proper scouting system and more media interaction. It’s never going to become the key attraction of the game, but it’s certainly an improvement over the mess that existed before it.


Aside from all this there’s a number of other tweaks and new features to be found in the game: regenerated players and staff now feature computer generated likenesses, while a particularly neat new feature is the ability to allocate unspent transfer funds to boost the wage budget. If you’ve ever wanted to sign a player but been thwarted by wage restrictions, you’ll understand how useful a feature this is. It’s also a pleasantly fast game, running just as well on my 3.4GHz Pentium 4 work machine as it did on my 2.66GHz Core 2 Duo equipped home PC. This is a good sign, especially for those who like to play FM on a notebook. 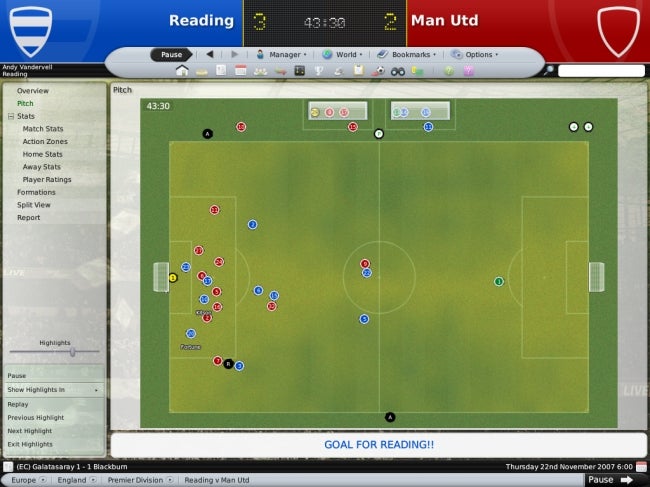 To surmise then, as is the case with many Football Manager releases, FM2008 is an evolution rather than a revolution. This is no bad thing, especially since past experience has shown revolutionary leaps in the series to be fraught with difficulty. Moreover, the new skin and advances in the confidence system add a lot to what was already an incredibly strong game, while the new advisor system makes it the most accessible version of the game in a long while. Crucially, it seems as though Sports Interactive has successfully avoided turning the game into a feature bloated mess, as was the fear a few years back. As such, it’s safe to say this is the best Football Manager yet, which is all recommendation it needs.


It was the best and still is the best. If you’re serious about the business of pretending to be a football manager then FM2008 is the game for you, there’s nothing more to it than that.