What is Fog of Love?

Fog of Love describes itself as a ‘romantic comedy as a board game’, which isn’t too far from the truth. Just like your favourite Hugh Grant movie, it’s a game filled with plenty of ups and downs and “will they or won’t they?” moments to keep you and your partner on your toes, while also providing plenty of entertainment for spectators too.

If you’re looking for a board game for two people, and like the idea of a bit of role play (nothing kinky), chances are you’re going to love Fog of Love’s imaginative gameplay and twisting, turning story lines.

It requires that both players get super-involved to get the most out of it – very much like a real relationship, in that regard. If your hearts aren’t in it, you simply won’t get as much fulfilment out of Fog of Love. 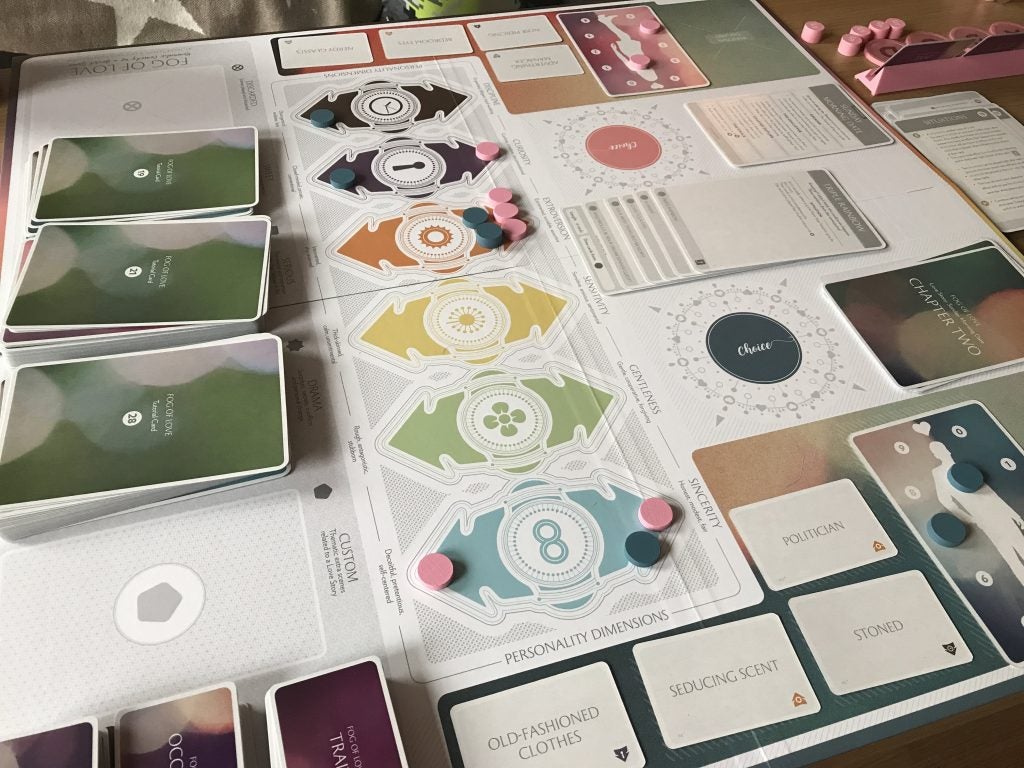 But tucked behind the emotional roller coaster facade is a clever game based around competitive and cooperative resource management. It’s up to you whether you want to help or hinder your partner; whether you put your own personal goals before those of your relationship.

Although you’re meant to play the game as fictional characters, you may well find Fog of Love reveals plenty about your individual personalities, which might make for some very interesting conversations away from the game.

Fog of Love – What do you get?

Fog of Love takes the form of a board and several decks of cards. The game is sectioned into several different story lines through which you play, from the introductory ‘Sunday Morning Date’ to ‘High School Sweethearts’. It means there are quite a number of decks to manage.

Each storyline’s cards come foil-wrapped when the game is bought new, helping to keep everything in order and giving the whole collection a real premium feel. The makers, Hush Hush Projects, really haven’t skimped on the quality of the game’s production, even if the game started life out on Kickstarter (as so many board games do these days).

The board itself is well made, the cards are beautifully printed, and all the extras are also made from premium materials. 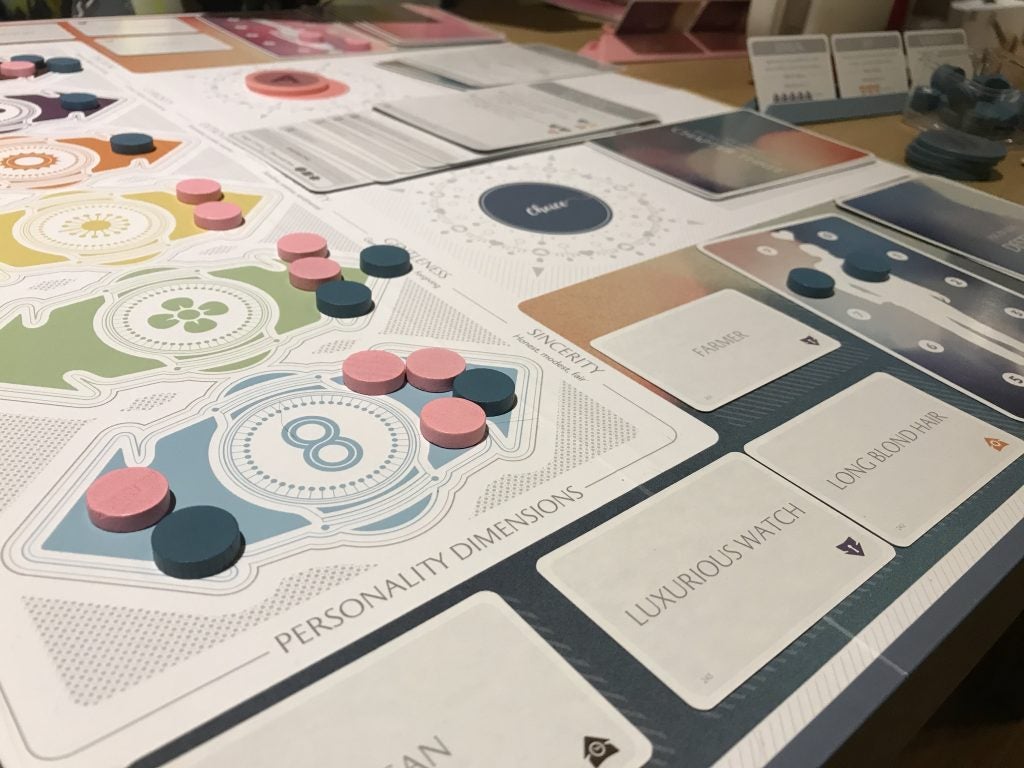 For example, through the games numerous scenes you have to make choices, and you do this by both secretly selecting a chip. The chips are reassuringly heavy, feeling very much like a metal poker chip, even though it’s just dense plastic.

You mark your personality traits and personal levels of satisfaction with painted wooden tokens, and you’re supplied with an attractive plastic box to hold both the chips and tokens. There’s also a card holder, similar to the tile holders in Scrabble, to keep your character’s attribute cards front of mind as the game progresses.

Like the tokens box, it’s another bonus inclusion that adds to the overall package’s value and presentation, but an inclusion the game would function perfectly well without.

Even the box itself is splendid, providing plenty of storage inside to separate all the decks of cards once you’ve taken them out of their foil wrappers. There’s space for future expansion decks, too.

Hush Hush Games really has made Fog of love feel like a labour of love and the overall package lives up to its somewhat premium price.

Fog of Love subscribes to the notion that you get back what you put in, just like any good relationship. To have the most fun, it’s best if both parties try to embrace their fictitious character and just go with it. In this sense, my partner being an actor made her the perfect candidate – but you don’t have to necessarily go fully method to have fun.

The game begins by concocting your character by drawing three occupations, selecting one and discarding the others. Similarly, you need to pick three character traits that define your personality. But these are to be kept secret because they form your underlying motivations.

It’s up to you to give your character a name to go with their occupation, helping to flesh out their back story. 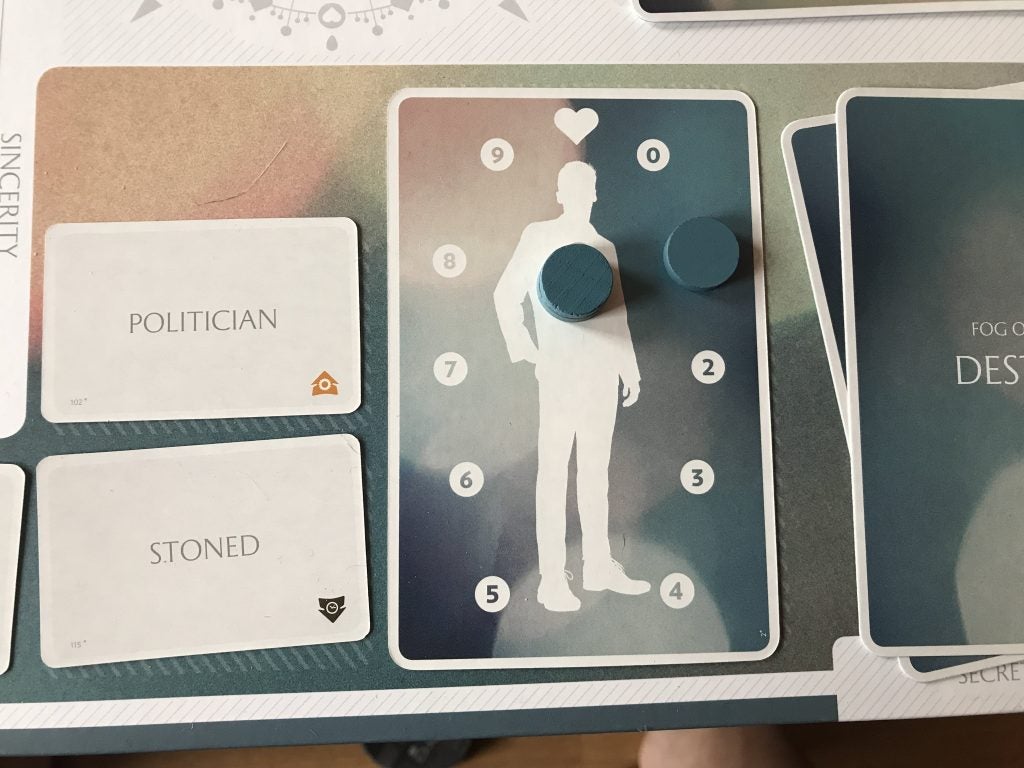 It’s entirely up to you how lavish you want to go with your introduction. In one game, for example, I became Arthur Hoggett, (secretly) an intense yet kind and disciplined farmer.

You’ll also need to pick three feature cards, but these aren’t for your character. Instead, they’re features of your partner, providing a brief description of their physical or personality attributes.

Once you’ve introduced you character’s names and occupations, you need to let your partner know the features you first noticed about them – their ‘crooked smile’, for example. It’s all good fun and sets the tone for the rest of the game.

I won’t go into too much detail about the finer gameplay details. The introductory Sunday Morning Date storyline does a fantastic job as a tutorial for anyone new to the game, interweaving instruction cards into the relevant decks as you play through your first game. It’s very clever and lets you hit the ground running, instead of having to spend time pawing through the admittedly beautifully printed instruction booklet.

But, essentially, each of the traits you’ve selected for your character will have individual or shared goals you work towards by collecting enough tokens, and that’s where the cooperative or competitive element comes in.

Destiny cards feature too, which also have an objective for you to fulfil, either for your own individual development or as a combined relationship goal. It’s a real test of your emotional awareness to be able to garner what your partner might be working towards, and deciding if you want to try to help them, possibly at a cost to your own wants and needs. 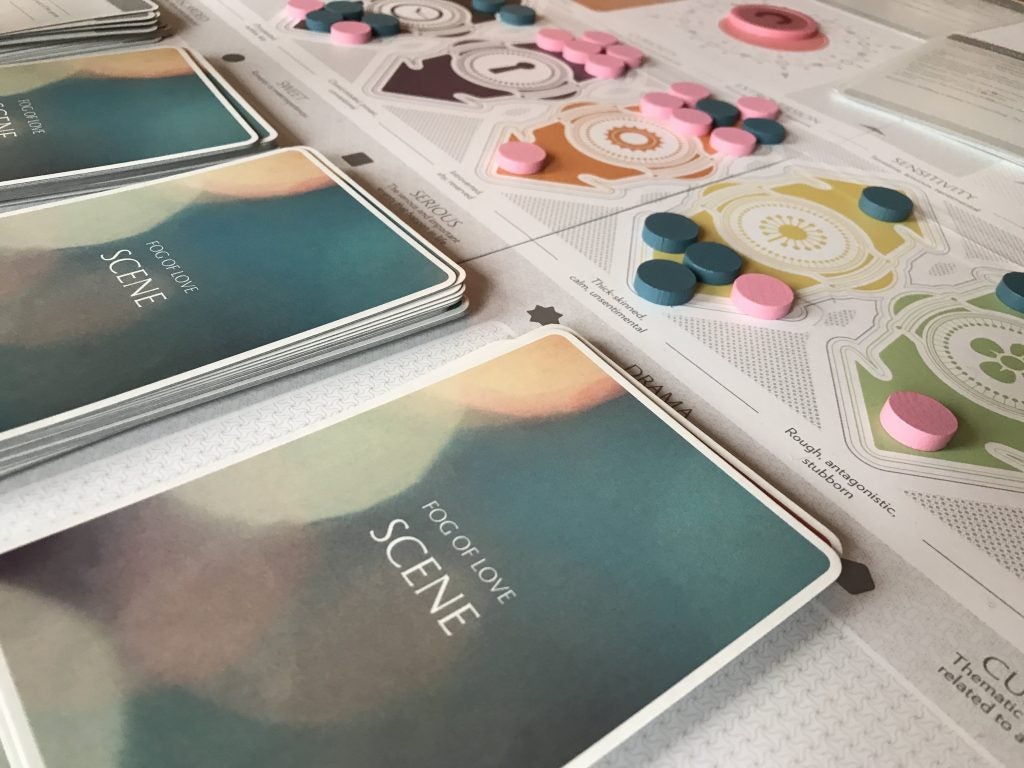 It’s the assortment of ‘scenes’ that play out in the storylines that makes the game entertaining. What would your character do in an awkward argument with their in-laws? When should you both update your social media relationship status? If you asked your partner for an alibi, would they oblige? How would you react when they tell you they have a baby from a previous relationship? The scenes range from the sweet, to the serious and dramatic, and it’s that diversity that makes the game a true rom-com emotional rollercoaster.

In many ways, the game emulates a real relationship, with the give and take needed to make a partnership work. If one person is too selfish, pursuing their own needs, things might crumble. But, conversely, if an individual is too selfless, they might be left unfulfilled and resentful. The game tracks each player’s ‘satisfaction’ in the relationship, and just like real life, there might be a serious imbalance here.

Not all relationships will end in a happy ending, either. Sometimes, you’ll decide you’re destined to break up. As the game says, it isn’t necessarily about fulfilling both of your destinies, but instead about the story you craft together. And often, it’s in dissecting how the storyline plays through that you learn about your characters – or maybe it’s about yourselves?

Why buy Fog of Love? 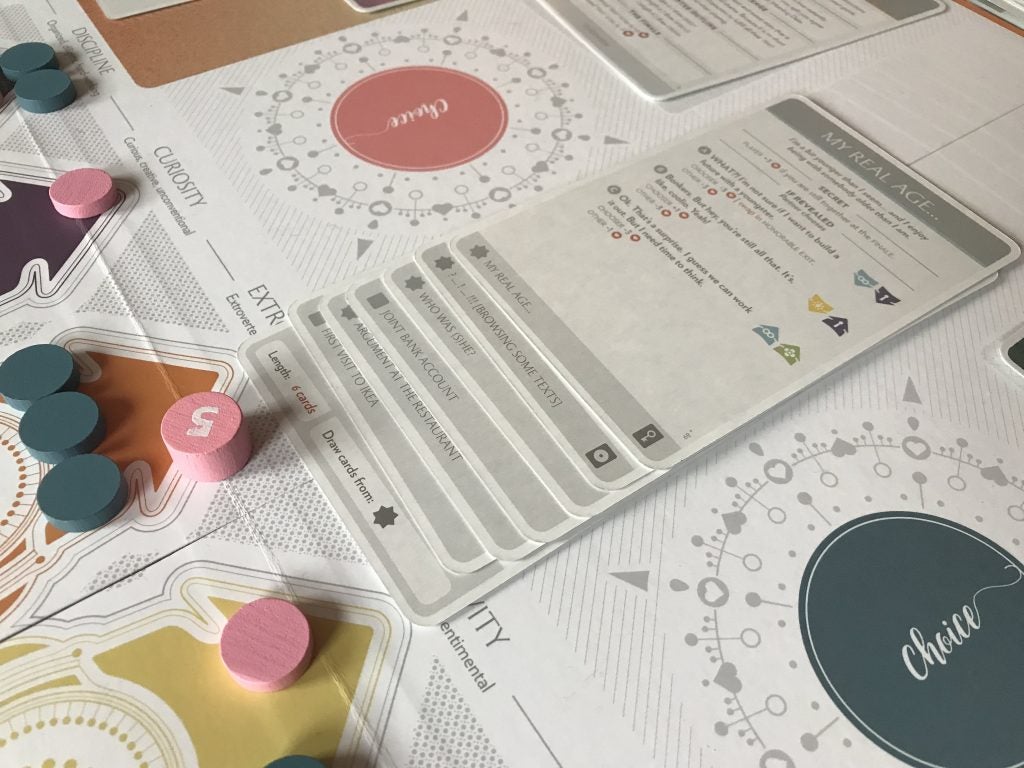 If you’re looking for a board game for two, Fog of Love is the perfect stay indoors date night game to break out after a romantic meal. You don’t have to be romantically involved to have fun, though.

If you’re willing to inhabit your characters and really go with the narrative then you’ll be rewarded with one of the most fun board games to emerge in recent times. After all, beneath the lovey-dovey surface, Fog of Love is a clever, more traditional game of resource management.

A clever board game that rewards those willing to immerse themselves into role-play.