Focals could be AR’s route into the mainstream. They deliver pertinent information to a non-invasive heads-up display, providing a well-thought-out interface, offering Alexa support too. They have a premium build, stylish design and support for prescriptions. With further display refinement, the company could be onto something.

There are many different roads down which augmented reality is traversing. Microsoft and Magic Leap are focusing on blending the digital and physical worlds with bleeding-edge experiences, while Snapchat Spectacles make your snaps look snazzier.

The Focals by North smart glasses offer a different approach, one that could see smart glasses enter the mainstream – especially if, as rumoured, Apple follows a similar path.

Contrary to other approaches, North’s (formerly Thalmic Labs) goal isn’t to make the digital world an omnipresent overlay to human vision. It wants to help users appreciate the people, the scenery and the reality around them. One way to do that is to deliver only the digital information that’s deemed necessary.

As you’d expect from a pair of $599 eyeglasses, the Focals are very well made. They’re sturdy and, at as little as 65g, don’t add prohibitive weight to proceedings. I don’t wear specs, so found the glasses a little heavy following more than a couple of hours of wear. I imagine for someone used to wearing prescription specs, this would be less of an issue.

Although the tech onboard does add some additional thickness to the arms, the Focals are super-stylish. They don’t look at all industrial, of the type many early mixed/augmented reality glasses, and I didn’t feel self-conscious wearing them out in public. 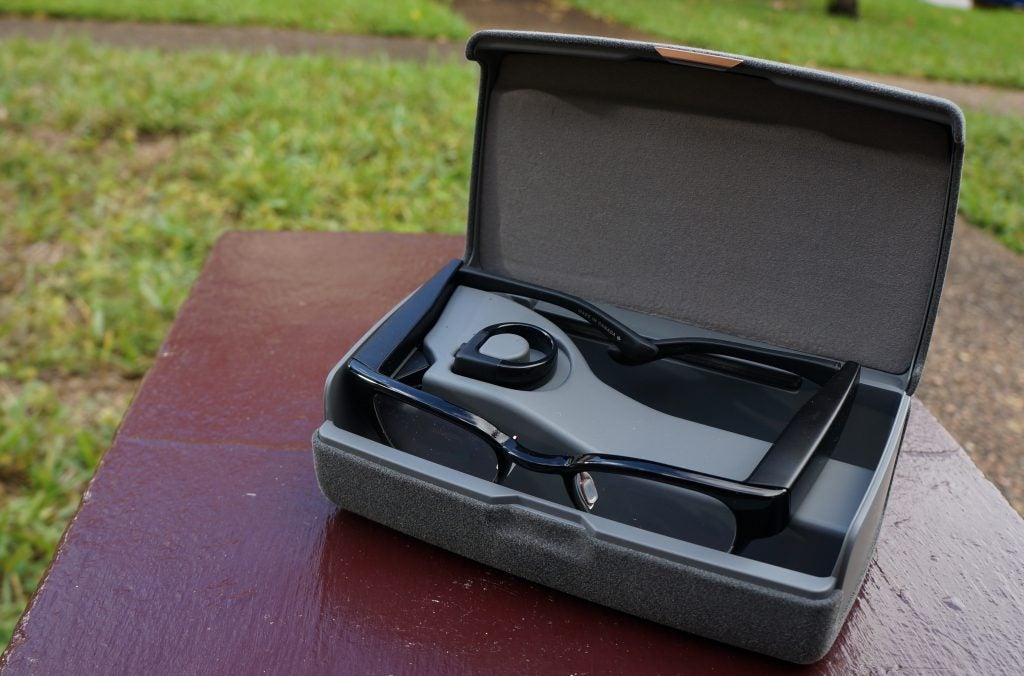 The glasses ship in a premium charging case, which enables the Focals and Loop ring – used to control the UI – to be fully recharged three times. North says you’ll get up to 18 hours of intermittent use from a single charge of the 700mAh cell, which means you won’t need to take them off during the day. We found that to be in line with our use over the course of the week. The case itself can be replenished using the bundled USB-C power cable and adapter.

The glasses themselves are IP55 water-resistant, so you’re fine to wear them if it starts raining, but not in the shower. The Loop is a little more protected from the elements, with an IP66 rating.

Focals by North fit and setup – If you have an iPhone, fitting can be done via the Showroom app

Until recently you needed to visit one of only two North stores in North America, or a pop-up, to be fitted. However, those with a Face ID-enabled iPhone can perform a digital fitting via the Showroom iOS app. It’s a short process that involves turning your head from side-to-side in order to take measurements. You’ll also place your index finger next to a credit card in order to measure you for the Loop ring. If necessary, you upload the prescription via the app before completing the order.

Delivery takes six to eight weeks. Once you receive the Focals you’ll adjust the ear and nose rests to ensure a secure fit, ensuring the circular display covering your right eyeball when you look in the mirror. The customised fit is important, not only for those prescription glasses wearers, but because any slippage knocks the display out of alignment. 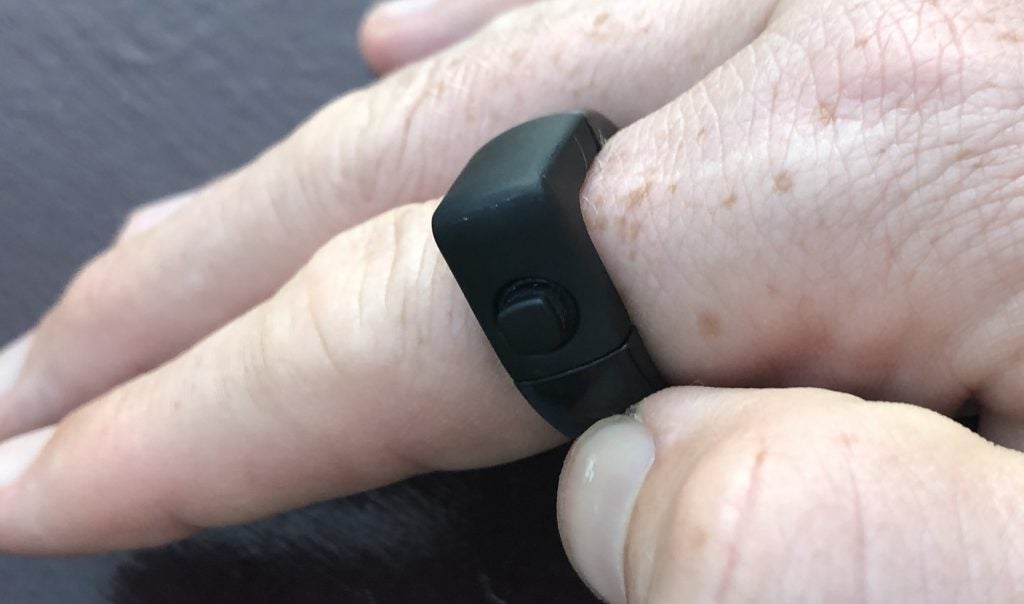 Setting up the glasses is done via an alignment process triggered through the companion app for iOS and Android. It’s necessary to use the Loop ring to bring shapes into focus and line up circles. We found perfecting the positioning and clarity of the image to be a little tricky, but more on that later.

Focals offer a heads-up holographic display within a pair of Alexa-enabled glasses not-to-dissimilar from the design of prescription specs. Via a Bluetooth 4.2 connection, a small projector casts your smartphone notifications, as well as walking directions, nearby eateries, sports scores, Spotify tracks and a growing array of other apps and services on to the display.

Here’s an idea of how the interface looks via the Lenscast feature within the Focals app. 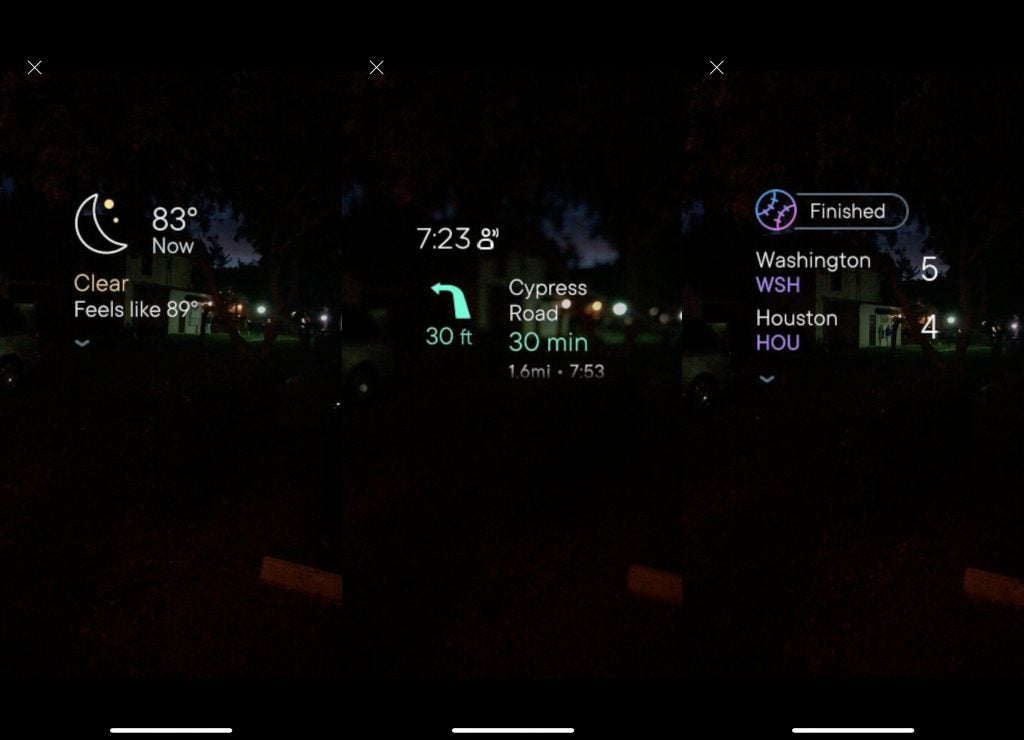 The simple user interface is controlled by a finger-worn Loop, which has a directional joystick and click button, enabling you to act upon those notifications and browse through the different feature headings. This also allows Alexa to be summoned, with a microphone picking up audio commands and a small speaker in the right arm will discreetly deliver audio responses. Speaker volume is quiet by design, but if you’re in busy environments then you may struggle to hear.

The idea is that the information is there when you need it; gone when you don’t. Notifications pop up and will fade away if you don’t act upon them, or once you’ve completed the task. The company believes this can help end that life-stymying curse of the smartphone, enabling you to keep it stowed in your pocket for more of the time.

This isn’t about moving the entire smartphone experience to your eyeline and just freeing up your hands, it’s about being economical with the information presented, based upon the premise that you’ll see what you need and avoid what you don’t.

In terms of messages there’s access to WhatsApp and Slack, Facebook Messenger, delivered within a few seconds of landing on your phone with an audible ping. Once you’ve verified your phone number, two-way text messaging is available via voice to text or by selecting pre-written options. Images aren’t displayed, but you can send gifs in reply. 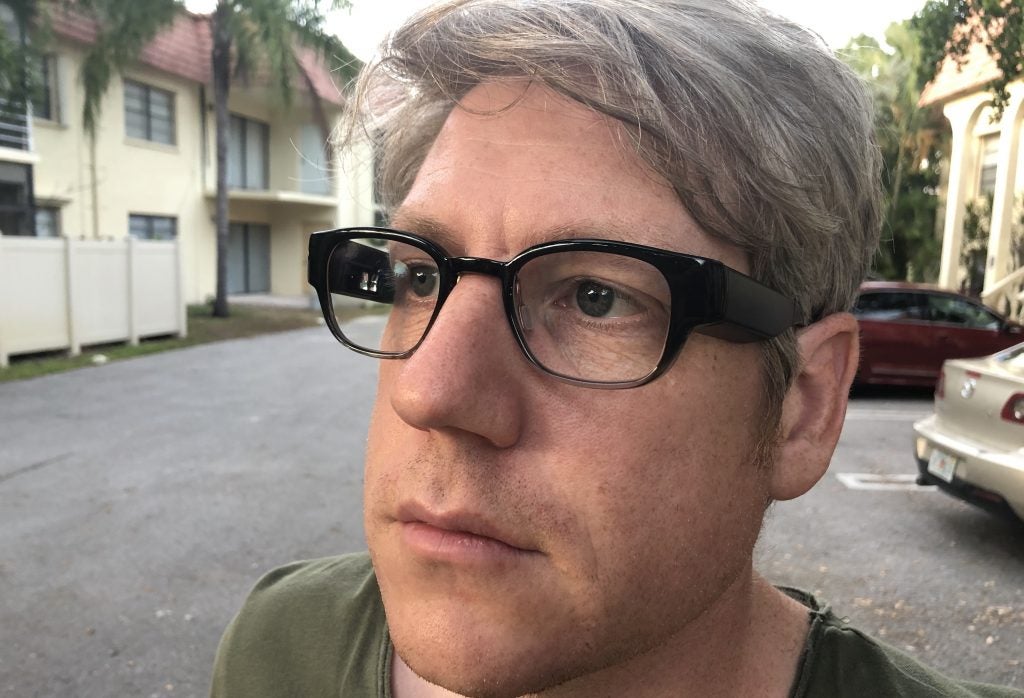 It’s easy to summon walking directions by browsing to the location section of the IU and using voice to request where you’d like to go. From here you can choose the walking directions or, with a synced account, request an Uber to grab you from your current location. If you choose to walk, you’ll see live turn-by-turn instructions displayed along with voice instructions. Interestingly, and importantly, if you’re driving there’s automatic detection to ensure notifications are muted.

If you’re a Spotify user, once you’ve enabled the app, you’ll see musical controls for the currently playing tracks, enabling you to pause or skip without taking your phone out of your pocket. 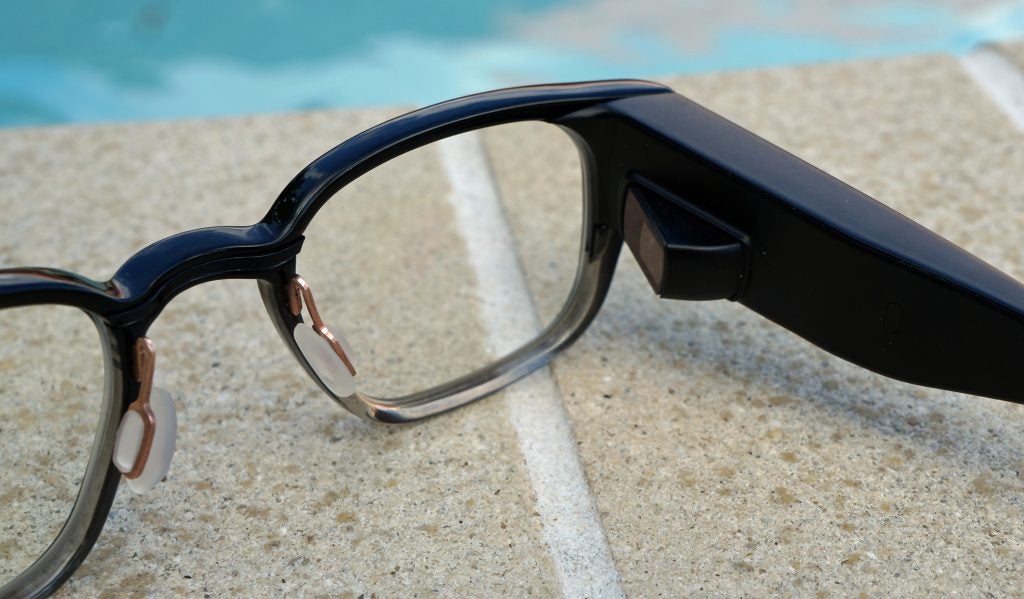 It’s compatible with Evernote and Microsoft OneNote, Todoist and Google Tasks applications, while it’s also possible to type a note within the Focals app, as a reminder. Access is controlled via the app. Google Fit users can also see their most recent stats. There are other abilities being added continually, many of which are available in the Experimental portion of the app.

As for Alexa, it’s accessible by holding down the joystick button and selecting “up”. From here the experience is similar to using it on other devices. You can access flash briefings, ask questions, quiz your calendar, check the weather and much more.

One notable absence is the camera. That means no Google Glass-like privacy worries for Focals wearers and those in their eyeline.

Focals by North display – Readable, but far from perfectly clear

A projector from the right side of the frame projects the holographic image into your line of sight, only lighting-up the necessary pixels on a 110 x 110 display. This is preferable to blocking out half of your vision and also assists with extending battery life.

If you’ve set up everything correctly, you’ll only need to adjust your eye’s focus in order to read the notifications as they’re summoned, or are pushed to display, appearing to be at around arm’s length. The need to adjust focus can become a little tiring, but given this is designed to take place only in short bursts, it isn’t a big issue.

I went through multiple alignment sessions within the Focals companion app, designed to perfect and tailor the experience. The company’s optician also guided me through the process. However, I was unable to achieve what I deemed to be perfect clarity. The text and icons appeared slightly blurry, but were certainly readable. 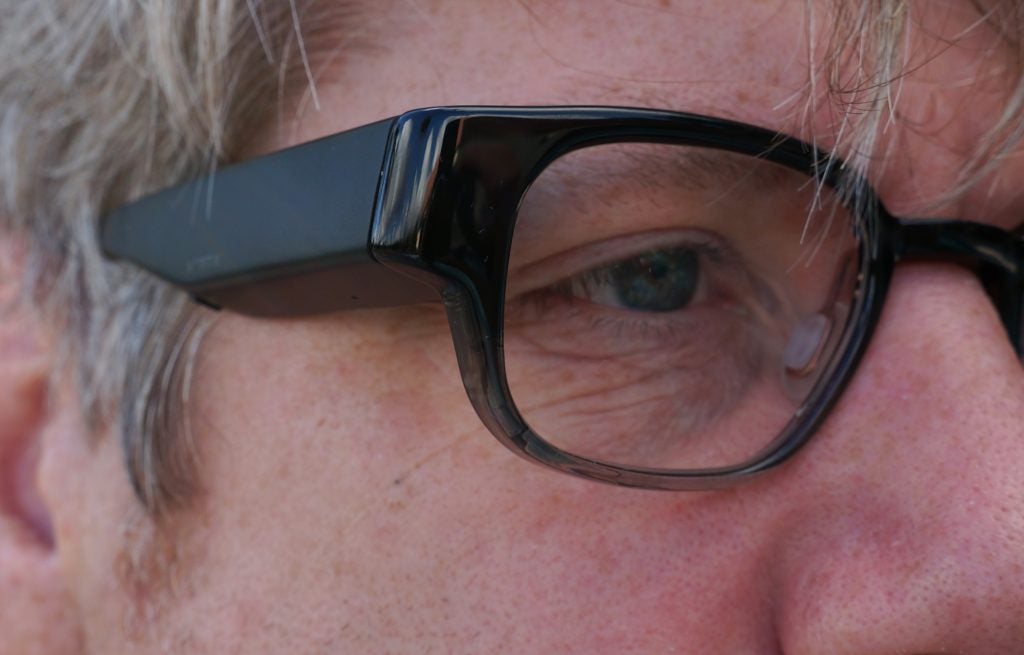 It’s possible this is attributable to my own eyes; it’s hard to tell for sure. I don’t wear glasses, but haven’t had an eye test in years. North does say that this is a first-gen product, so perhaps further refinement is to come. We found lowering the display brightness knocked some of the glare off the text and assisted clarity, and also that the experience works best when you’re looking at a plain background, because it’s easier to focus on the pixels.

At times, the image also appears a little akin to the tracking lines on old VHS tape, although not to the point of distraction.

Overall, I found myself feeling a little cross-eyed during and after using the Focals glasses for an extended period. To others, it was patently obvious and annoying when I was focusing on the display rather than on the conversation I was having. That’s another issue for AR to encounter. 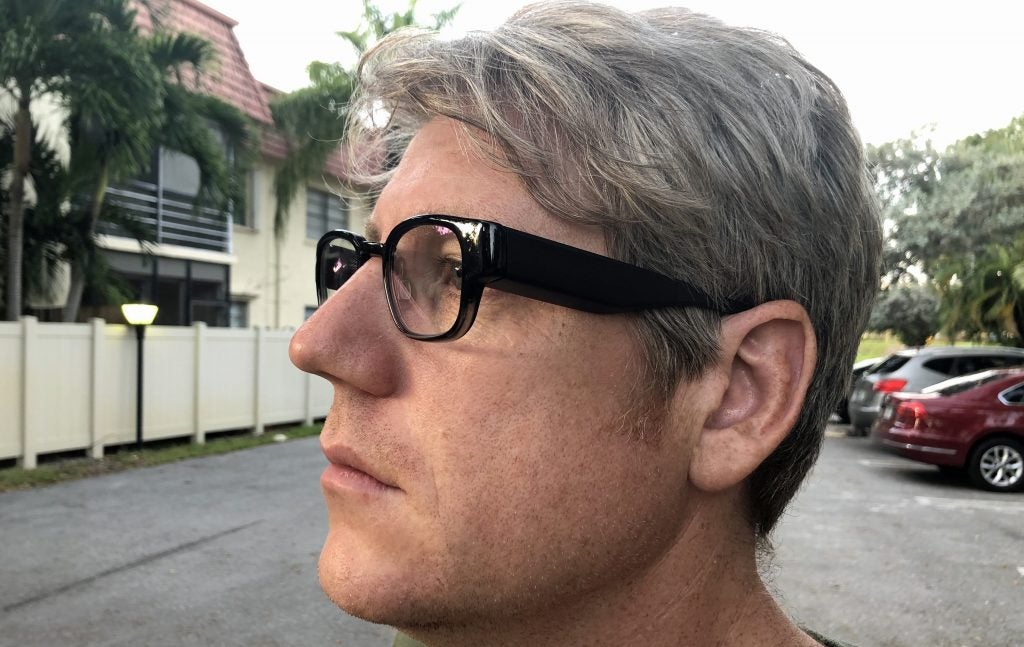 Right now if someone’s on their phone, you know they’re not paying attention to the conversation. This changes the paradigm somewhat, disengaging someone from the conversation while the phone is in the pocket. From a societal point of view, you wonder about the ramifications.

From a personal perspective I found myself picking up my phone less because I knew any important messages were coming to my eyeline. The more I used Focals, the more I found myself relying on them.

Should I buy Focals by North?

Considering Focals are a first-generation product in a new category, the experience feels surprisingly far along. It ticks most of the boxes for features, with a well-implemented user interface and useful Alexa integration. More features are being added all the time.

However, they remain in the realm of the early adopter for now, due to the price and a less-than-perfect display experience.