The Fluance RT80 has plenty to recommend it, with its even-handedness and its perfectly capable integrated phono stage high on the list of positives.

The Fluance RT80 is the Canadian brand’s entry-level vinyl player in its turntable range.

If you’re in the market for a reasonably affordable turntable, and you’ve done your due diligence, the chances are the same brands have popped up a few times now. After all, the specialists like Pro-Ject and Rega are ubiquitous for a reason – and global Leviathans like Sony know what they’re doing when it comes to this ancient technology too.

Sometimes, though, it pays to consider the path less travelled. Canadian brand Fluance may not have the profile or the back-catalogue of some of its European rivals, but that doesn’t mean its products aren’t worthy of scrutiny. After all, when we looked at and listened to the £500 Fluance RT85, it gave a very acceptable account of itself.

Competing at the £500 mark is one thing, though – the sub-£200 (or ‘entry level’) market is a bit different. So does the Fluance RT80 have what it takes to ruffle the feathers of the establishment?

Admit it: for less than £200 you’re not expecting a departure from the long-established turntable design template? The RT80 looks exactly as you’d expect, and there’s really nothing wrong with that. 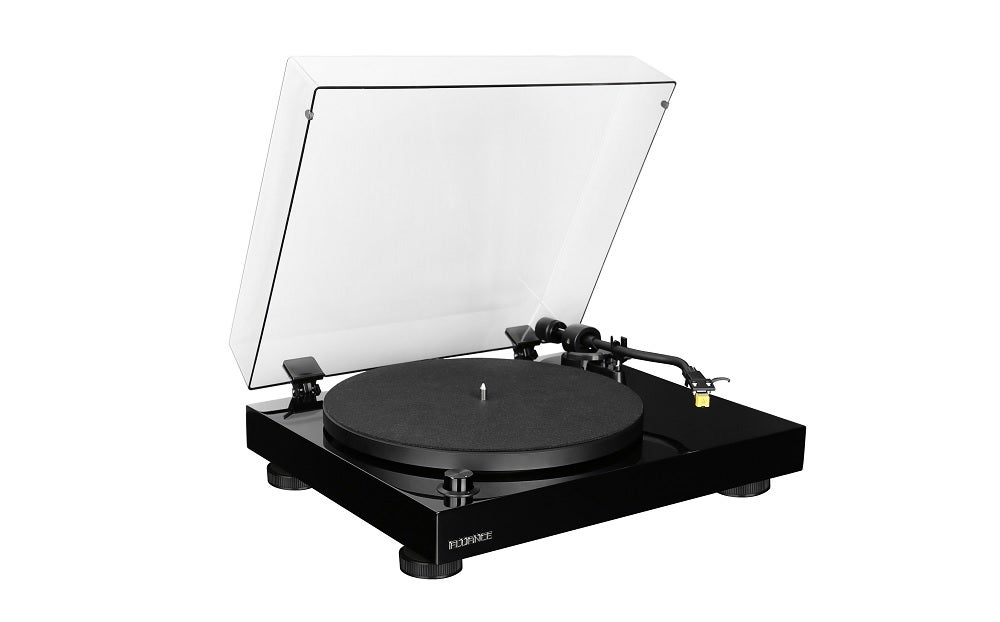 The plinth is built from MDF – always a good choice, thanks to its good resonance rejection and its stiffness relative to its weight – and smoothly finished in high-gloss black. Underneath it’s standing on four self-levelling and sturdily rubberised feet, and on top there’s a tinted plastic dust-cover.

Build quality is well up to the standard the price demands, and the finish is smooth and professional. If you’re going to judge the value of a turntable purely on the way it looks, the RT80 certainly seems the money’s-worth.

But, of course, there’s a bit more to it than a shiny plinth, some chunky feet and a dust-cover. And the real action is between the plinth and the cover.

The Fluance RT80 is a belt-drive design (no surprise at this price), and the drive motor is rubber-isolated from the plinth at three points. The 4.5mm-wide belt will turn the aluminium platter at either 33.3 or 45rpm; there’s a speed selector switch at the bottom left of the surface of the plinth. In and of itself this is a welcome feature, as the majority of competing decks at this sort of money rely on manual speed-change. 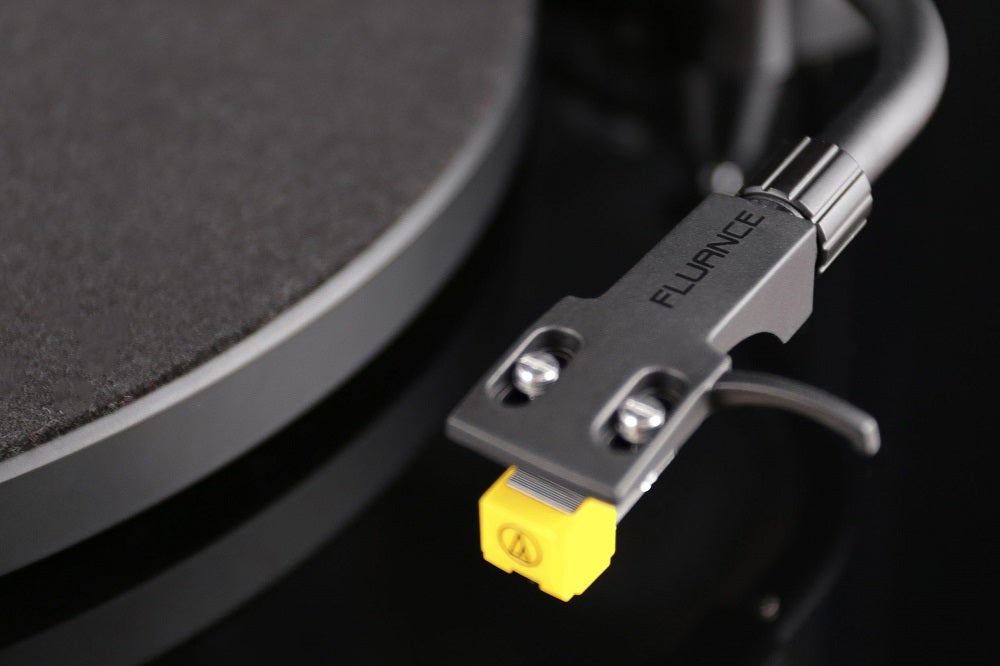 The 224mm S-shaped aluminium tonearm accepts its headshell via a bayonet connection. The headshell is pre-fitted with a very acceptable Audio Technica AT91 moving magnet cartridge. The cartridge has a tracking weight of just 2g, so won’t degrade the condition of your vinyl any time soon. All you need to do is set the counterweight and anti-skate control to their ideal positions (the manual is mercifully easy to follow in this respect) and you’re good to go.

Well, you’ll be good to go once you’ve had a proper look at the rear of the RT80, anyway. In the recessed panel at the rear of the plinth there’s a socket for a mains power adapter, and stereo RCA connections (plus a grounding post) for connection to an amplifier; Fluance provides some absolutely bog-standard interconnects to get you up and running. There’s also a switch to engage or disengage the auto-stop feature, so if you’d prefer the turntable to stop turning once the tonearm is no longer above the platter, here’s where you can make it happen. 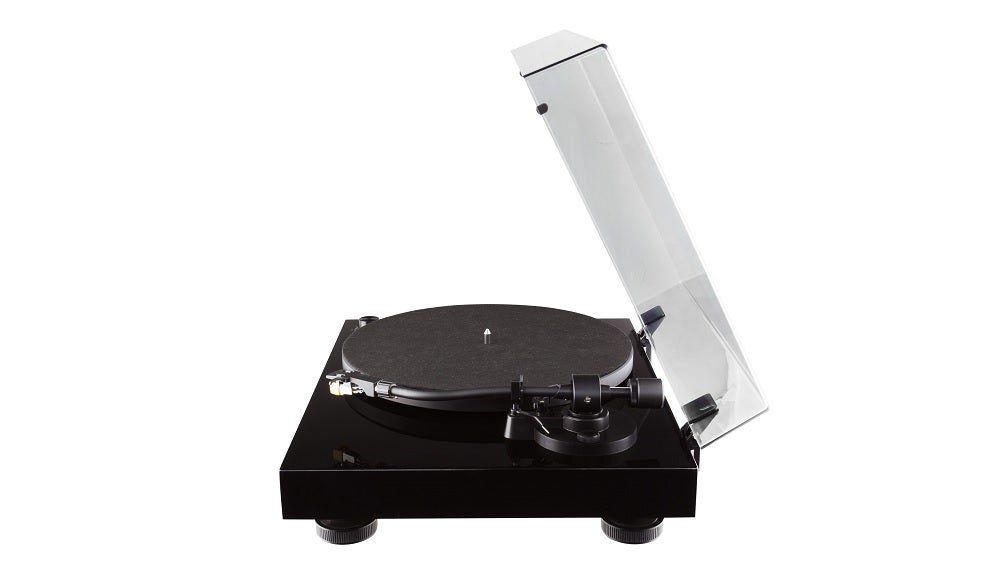 There’s also a switch here to turn the integrated phono stage on or off, and so without the needle having yet touched the vinyl, the Fluance makes a strong case for itself. Not every amplifier or all-in-one system has the necessary oomph to amplify a turntable sufficiently to make it audible – the signal from a record player is pretty feeble, after all.

So if your system doesn’t have phono amplification, you must either buy an off-board phono stage to do the business or you need to replace your amplifier. Or you buy a Fluance RT80, in which case you’re covered either way. If your amp or system doesn’t have phono amplification, just turn on the Fluance’s integrated Texas Instruments phono stage and away you go.

Of course, a test like this requires listening to the turntable for many an hour, using many a record from many a genre of music. What’s obvious about the Fluance RT80 almost from the get-go, though, is just how consistent it sounds in any and every circumstance.

Normally, if you switch between the likes of Camille Saint-Saëns’ Carnival of the Animals, Kendrick Lamar’s To Pimp a Butterfly, John Coltrane’s Blue Train and Ella Fitzgerald’s Ev’ry Time We Say Goodbye (as happens in the opening few hours of this test) it’s possible to get a rise out of a turntable. Normally it’s possible to make a turntable betray its preferences and its dislikes. Not the RT80, though. It remains unruffled and consistent throughout. It’s an admirable attitude to adopt.

The RT80 makes good on many of the perceived advantages of the vinyl format. It deals with rhythms and tempos, whether the absolutely four-square, regimented sort of Kendrick Lamar or the fluid, endlessly varying John Coltrane alternatives, in a completely naturalistic manner. It integrates every individual element of a recording into a coherent and convincingly unified whole, which, when you’re talking about the massive attack of the Saint-Saëns piece, isn’t as straightforward as it sounds. There’s a mild but definite heat to its presentation, too, a warmth that vinyl-fanciers particularly fetishize. 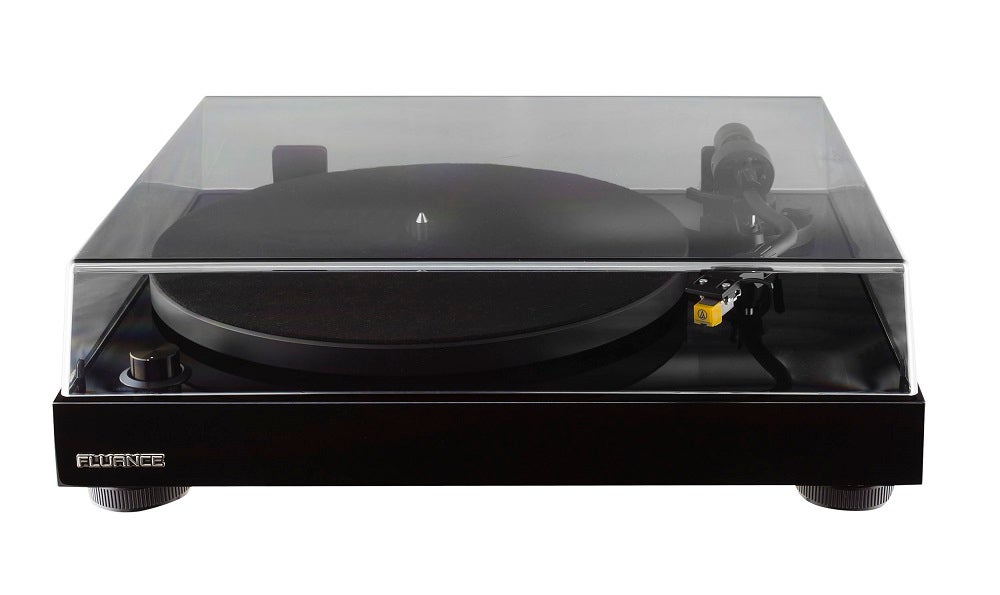 As far as tonal balance goes, the Fluance errs on the side of ‘polite’. There’s a degree of attack to the highest frequencies, but this turntable is never going to let treble sounds become overly bright and, as a result, the RT80 can sound just slightly rounded-off and dull at the top of the frequency range. Counter-intuitively, though, this is combined with just a suggestion of sibilance that can make the treble sound just slightly unnatural.

At the bottom of the frequency range, there’s the warmth, and no lack of control either – bass notes or hits start and stop with a certainty that’s impressive by the standards of affordable turntables. There’s not a huge amount of extension, though, and as a result the Kendrick Lamar recording shoves gently where it should ideally hit hard. As far as detail and texture of low-frequency information goes, though, the RT80 is one of the better sub-£200 turntables around.

In between, there’s sufficient detail in the midrange to make a vocalist sound animated and characterful, and just about enough attack to allow them to get their point across. The Ella Fitzgerald recording, in particular, revels in the Fluance’s slightly lush midrange emphasis, allowing her uniquely honey-dripping vocal style full expression.

It’s a lack of overall dynamism that does most to undermine the RT80’s presentation, though. While it has no problems extracting detail, low-level harmonic variances of John Coltrane are glossed over somewhat, and the RT80 lacks the out-and-out wallop to put the sort of distance between ‘quite quiet’ and ‘extremely loud’ that the Kendrick Lamar recording demands. Everything happens at a consistent level, whether that was the artist’s intention or not.

The Fluance RT80 has plenty to recommend it, with its even-handedness and its perfectly capable integrated phono stage high on the list of positives. Having that onboard phono stage will limit the need to purchase an external one to boost the signal from the turntable.

You shouldn’t buy it  if…

The closest is probably Sony’s PS-LX310BT. It’s only a little more expensive, has an integrated phono stage and wireless Bluetooth connectivity and sounds inoffensive in the best sort of way. No, it can’t match the Fluance’s rhythmic certainty and it’s fitted with an altogether more prosaic cartridge – but if it’s convenience you’re after, the Sony’s got it in spades.