Flip may have pioneered the idea of pocket Internet video cameras, but it has been a little bit slow moving up to HD. The diminutive Mino was the first to be updated (to the MinoHD naturally}, and Creative had already beaten it to the punch with the Vado HD. Now, at last, the original Ultra has taken a step higher on the resolution ladder.


The UltraHD doesn’t look significantly different to the standard-definition Ultra. It’s a few millimetres fatter, but you would be hard pressed to notice even when the two are placed side-by-side, and it will fit just as easily in your pocket. However, where the Ultra is available in four different liveries, including pink and yellow, the UltraHD takes a more monochromatic approach and can only be purchased in white or black. 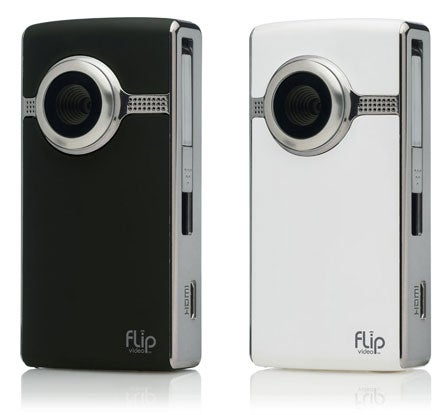 Inside, the UltraHD bears a lot of similarity to the MinoHD. It uses the same 1/4.5in CMOS sensor, and records video exclusively at 1,280 x 720 with 30 progressive frames per second, using a 9Mbits/sec data rate. But the video compression system is Flip’s Video Engine 3.5 rather than 3.0, and the UltraHD also sports 8GB memory, twice that of the MinoHD. This means it can store two hours of footage, but as with all previous Flips there is no option to upgrade capacity via removable storage. 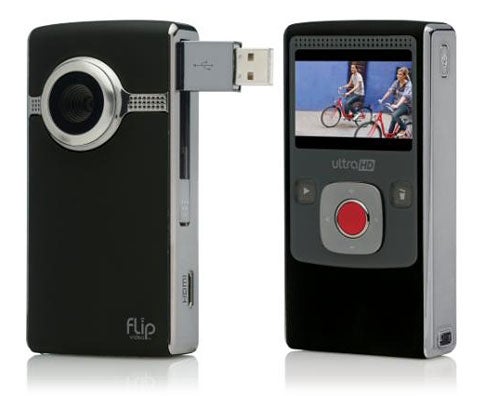 One thing you can swap out is the battery. The original Flip Ultra relied on AA cells, so you could simply pop in new ones if you ran out of power when out and about. The Mino, on the other hand, traded this flexibility for the space saving afforded by a built-in rechargeable battery. The UltraHD takes a third route, still using AA cells but with a rechargeable pack included in the box. This is topped up every time you plug the unit in via its USB connection, and lasts over two hours. But if you run out of juice on the road, you can still just pop in some alkaline cells instead.

As is par for the course with camcorders in this class, there are no manual settings available. The plus and minus buttons above and below the record button operate the meagre 2x zoom, which is digital so reduces quality when the image is magnified. Other than that, there’s nothing for the user to configure at all. The phrase ‘point and shoot’ has been taken quite literally here. The lens is also fixed focus, with a fairly sizeable minimum range of 1.5m, so macro close-ups won’t be possible. However, the lens isn’t as wide angled as that of Creative’s Vado HD. 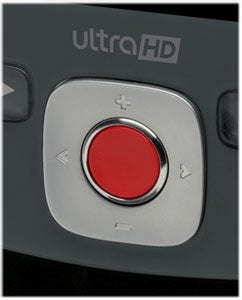 With previous Flips, we have been mildly surprised by the image quality on offer. Thanks to the use of larger sensors than you might expect for a pocket device, Flips generally far outperform camera phones, or even most compact digital cameras, although few ‘proper’ camcorders would feel under threat. Since there is no backlight compensation option, the UltraHD will be fooled by darker objects against bright backgrounds – such as shooting people with the sky behind them. But where the lighting is more even the results are more than adequate. 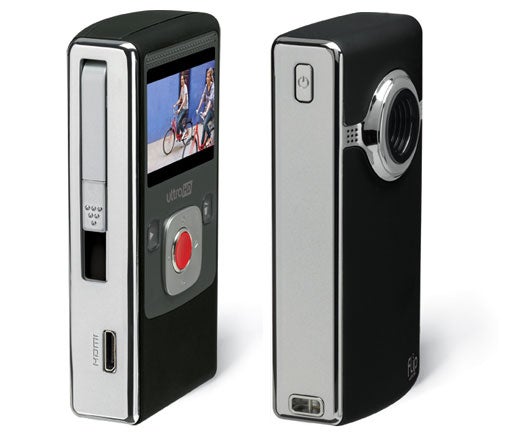 More significantly, the UltraHD does a competent job in low light. Here, it actually beats low-end big-brand HD camcorders for brightness and noise, although without any manual settings you can’t compensate with iris, shutter, or gain adjustment. This is particularly important considering the probable uses for a camcorder in this class. With its considerable pocket friendliness, the Flip UltraHD is even more likely to be whipped out in locations with poor illumination. In our gruelling 100W ceiling-lit living room test, it still managed to pick up plenty of colour and detail, where lots of more expensive HD camcorders fail dismally. We even noticed a slight improvement over the MinoHD, implying that the UltraHD’s newer Flip Video Engine contains tweaks in this area.

Flip pioneered the concept of camcorders with built-in Internet video sharing software, and the UltraHD now includes the new FlipShare, which we first saw in the MinoHD. It’s cross platform, running on Windows XP SP2 or later and MacOS X 10.4 or later. The software installs from the Flip when you first plug it in via its integrated USB connection. As built-in software goes, FlipShare has a fairly decent level of features. Simple trimming tools are available, so you can set beginning and end points for each clip. You can also combine multiple clips together, with rudimentary opening and closing titles, plus a soundtrack. 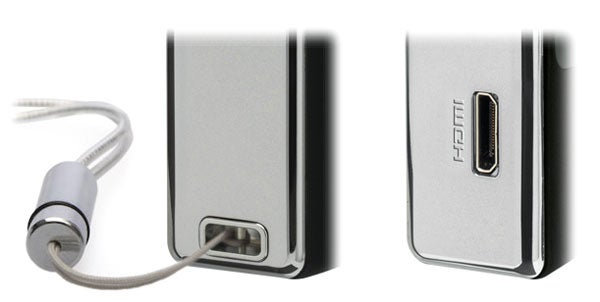 But the core feature is uploading video online via the host system’s Internet connection. FlipShare has direct support for YouTube and MySpace, so all you need to do is enter your username and password, plus optional tagging. You can also export movies to a folder for manual uploading to other websites. FlipShare can even prepare videos for DVD, although you will need a third-party app to do the actual disc burning. 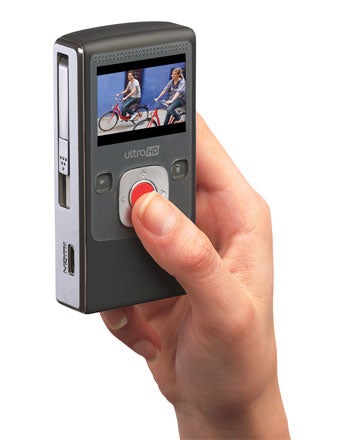 If you just want to watch your footage on your TV, the Flip UltraHD has a built-in HDMI connection. However, this is a mini socket so will require an adapter for use with regularly sized HDTV cabling. There are also no analogue output options at all, unlike the MiniHD, but at least you will be able to see your HD footage on your HDTV in all its digital glory.


The UltraHD continues Flip’s tradition of decent video in a wide range of conditions with zero effort, easy online uploading, and compact size. However, the existence of pocket Internet camcorders as standalone devices is increasingly under threat from high-end camera phones like the iPhone 3G S and Cupcake-equipped Android mobiles. So, for now, the Flip UltraHD offers better image quality, justifying its reasonable £160 price. But the writing is clearly on the wall.