A new camcorder format is upon us. Traditionally, the focus has been on video quality and features. But the mobile phone has opened up a new culture of grabbing the moment and rapidly sharing the results, with less concern for what the footage actually looks like. So camcorders are adapting to meet the challenge, which is leaving opportunities open to manufacturers not normally associated with the video business.


Creative was the first to get a product for this new era over to TrustedReviews in the shape of the Vado. But Pure Digital Technologies is making much more of a song and dance about its Flip. The original Flip Video wasn’t launched in the UK, so our first taste is the Flip Video Ultra, which is slightly smaller and of sleeker design, with double the storage capacity. The Ultra is about as tall and wide as the Vado, but around twice as fat, although there’s also a Flip Mino available in the US with similar dimensions to the Vado. 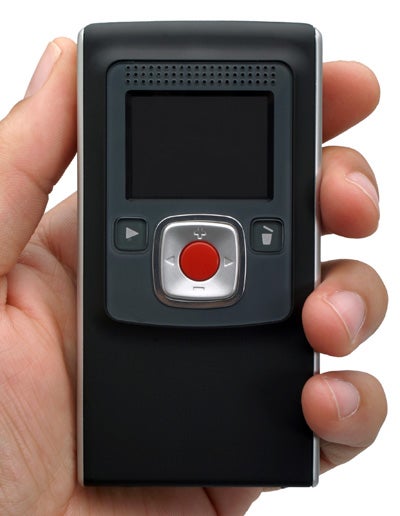 Realising the impromptu videomaker is more style conscious than the camcorder enthusiast, Pure Digital makes the Flip Video Ultra in four main colours – white, black, orange and pink (with a green one also cropping up online). So you should be able to buy one which matches your outfit. The device itself uses a 1/4in CMOS sensor, which is reasonably large for a low-end camcorder. Pure Digital doesn’t state how many pixels this CMOS sensor has, but each pixel is apparently 5.6μm across.

Like the Vado, the Flip shoots at 640 x 480 and 30 frames/sec, which is great for YouTube compatibility but not so good if you want to burn a PAL DVD of your footage, as that will be running at 25 frames/sec and quality-reducing frame interpolation will be required. There is only one data rate available – 4.5Mbits/sec, which means the 2GB of on-board memory will be enough for an hour of footage, and there is no slot for adding any more. Instead of using a rechargeable battery, the Flip works on two AA batteries, which last a couple of hours. So, unlike the Vado, you’re not tied to a PC for power, although this is one of the reasons the Ultra is more portly.

We said this new style of camcorder is more about sharing and less about features, but the Flip really takes the concept to the extreme. It doesn’t have any menu system at all, so there are absolutely no settings to deal with. The buttons let you zoom in and out, although this is a digital zoom and it reduces image quality quite obviously. You can play videos back and delete them. But that’s it – even less than Creative’s Vado.


So the Flip is entirely focused on point-shoot-share. The fun can be extended with the range of custom accessories, which include an action mount enabling you to attach the camcorder to a helmet or bike handlebars (£14.99) and a sealed underwater housing (£29.99) so you can shoot whilst swimming or diving. There is also a USB cable extension and tabletop tripod available, both with colour matching for your particular Flip, although at £14.99 they’re not exactly cheap. 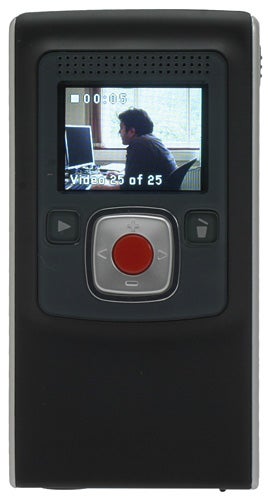 The drawback with sub-£100 camcorders in the past has always been video quality, particularly in low light. The Flip is still not going to be posing a threat to Canon, JVC, Sony or Panasonic in this department. But it is much more capable in low light than the Creative Vado. The image quality does soften and become grainy, but the colour and brightness are maintained at noticeably lower illumination. In full sunlight, the colours are vibrant and heavily saturated, with plenty of detail and no jarring signs of compression. However, areas of bright colour blow out in bright light, and the fixed-focus lens means that the image isn’t always sharp. Nevertheless, the quality is still better than any cameraphone and some digital still cameras. 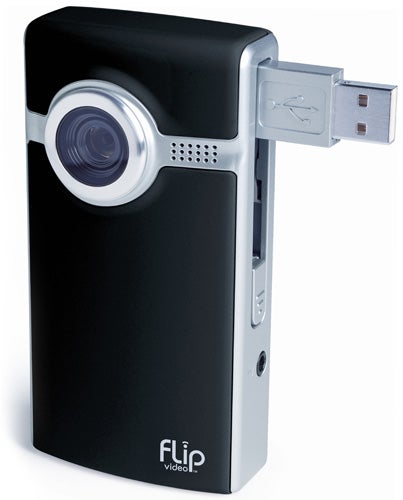 The Flip gets its name from the way its built-in USB plug flips out of the side of the unit, ready for connection. You simply plug it in, and the built-in software loads automatically. But where the Vado’s on-board Vado Central only lets you preview and upload your clips to the Web, the Flip incorporates much more elaborate features. There is Mac software included, too, unlike the Vado.


Of course, the primary focus is still on sharing. You can upload directly to YouTube, AOL Video, myspacetv.com, or use the Flip Video Upload Assistant. But this just gives you the same three options, plus posting an Amazon.com video review. We would like to see Facebook added to the list, as this is so popular now in the UK. When uploading to a video service, you simply fill in your login and password, and state whether the video is to be private or public. If you want to add further information and tagging, you will need to log into the website directly.

There are also options to email the video, which actually uploads the video to www.theflip.com and sends out the link to the recipient. Emailing videos doesn’t use your built-in email client, so can be performed from any PC. The email greeting uses a similar system, but with the video embedded in a graphical template design. 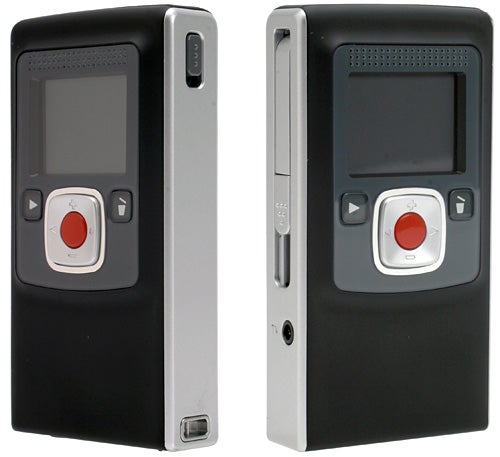 The software even has editing facilities. You can change a clip’s in and out points before uploading, and a version of the Muvee automatic editing software is also included. Muvee will mix your video for you according to a chosen template – No Style, Nostalgic, and Kaleidoscopic, Playdate, Classic, and Journal. This cuts up the video clips and edits them to music, either from the chosen style or a separate file. Or you can have no musical background at all. The results will then be entered into the library for sharing via any of the methods already described. 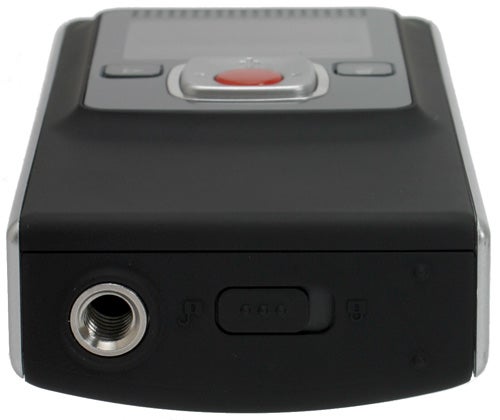 This all means the Flip software takes much longer than the Vado’s to load up when you plug it in, which in turn takes some of the edge off the ‘quick upload’ functionality of this camcorder format. But it could also lure unsuspecting, occasional videomakers into doing more sophisticated things with their footage. However, if you just want to see what your videos look like on a TV, a minijack is integrated and the cable is included in the box for attaching via composite video and RCA audio.


The Flip Video Ultra isn’t quite as svelte and pocket-friendly as the Creative Vado, which you can pop in a pocket like a mobile phone. But its better image quality in low light and much more extensive software features give it the edge. The Vado is cheaper, but you have to pay extra even for a video cable. So the Flip Video Ultra, with its range of fun accessories, is the device most likely to be the video sharer’s camcorder of choice.