The Flip brand is almost as synonymous with pocket Internet camcorders as Hoover is with vacuum cleaners. However, just as Hoover has been usurped by other manufacturers -particularly Dyson – the Flip has plenty of competition. In the UK, it was beaten to market by Creative, and now Flip’s Mino HD arrives hot on the heals of the Creative Vado HD, although the Mino HD was released at the end of 2008 in the US.


The Mino HD looks virtually identical to its non-HD predecessor. However, where most previous Flips came in a choice of colours – and the original Mino could be either black or white – the Mino HD has only one option: black. But, as they say in the fashion world, at least black never goes out of style. The only indication of the increased capabilities of this version is the subtle Mino HD logo on the back. 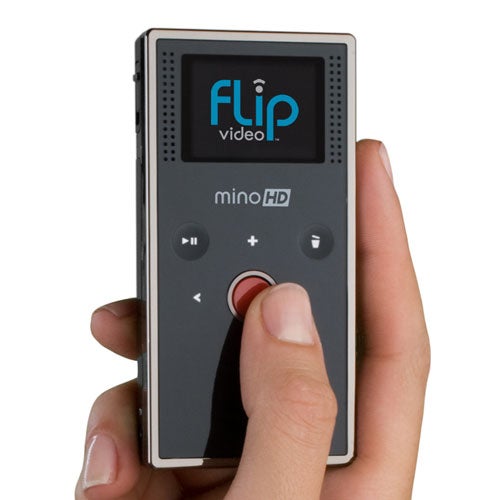 Where the original shot VGA video at 640 x 480, the newcomer increases the resolution to 1,280 x 720, with the same progressively scanned 30 frames per second. The CMOS is actually slightly smaller, at 1/4.5in where the Mino has a 1/4in sensor, but this is still a fairly healthy size, with positive implications for low-light shooting, although Flip doesn’t quote the CMOS resolution.


To cope with the higher-resolution video, the memory complement of the Mino HD has doubled over its predecessor, to 4GB. However, the video data rate has been more than doubled to 9Mbits/sec, so the capacity is still quoted at approximately an hour of footage. As with previous Flips, there’s no card slot for upgrade, so an hour will be your limit, and there are no lower-quality shooting options, either. Creative’s Vado HD comes with twice the memory, as well as offering lesser data rates and resolutions.

In fact, after initially setting time and date, there is almost nothing else to control on the Mino HD other than starting and stopping recording. There are plus and minus buttons to operate the 2x digital zoom, but annoyingly these only become active when you are already shooting. So you can’t set up the zoom on a shot in advance. Not that we’d recommend using the digital zoom anyway, as it clearly degrades image quality.

Other than that, the Mino HD incorporates a regular tripod mount on the bottom, which will be particularly handy for securing it to a car or bike for action shots. Naturally there’s no accessory shoe, microphone input or headphone jack – the target market would never use them anyway. However, the LCD is tiny, with a 1.5in diagonal, and as it has a 4:3 aspect the 16:9 video preview only fills part of it. So you really don’t see very much of what you’re shooting. 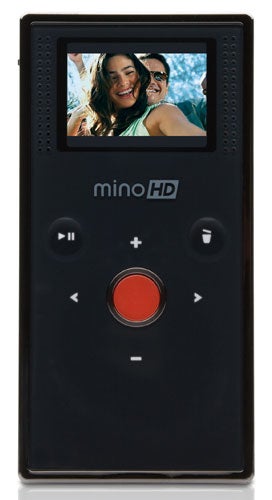 Although we never expect camcorders in this class to compete with mainstream models in terms of image quality, we have been mildly surprised at how well most of them perform. The Mino HD continues this trend. You don’t get image stabilisation, there are clear signs of compression artefacts and bright areas easily blow out, but colours are reasonably faithful in good lighting, and there’s an acceptable amount of detail.


Most impressive is how the Mino HD copes with low light. In our all-important test of a room lit only by a 100W ceiling bulb, the Mino HD shot footage you might actually be able to use, unlike many cheap camcorders. Toshiba’s Camileo P30, for example, failed dismally in this respect. 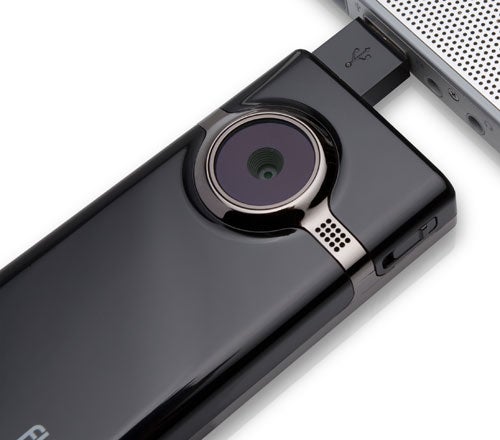 Since this is a pocket Internet camcorder, however, the ease with which you can put your video online is a major selling point, and here Flip just about maintains its crown. As before, a full-sized USB plug pops out of the device at the flick of a switch – from which the brand name ‘Flip’ is derived. The entire bundled software suite resides onboard, and installation starts automatically when you plug the Mino HD in for the first time. So, in theory, you can upload your videos from any PC – although, in practice, only if the owner of the PC lets you install the software.

After a reboot, you’re greeted by a fairly capable app, considering where it was installed from. The software has been completely redesigned from previous models, and is now called FlipShare. It’s a much cleaner interface than before, but the features are broadly the same. You can upload directly to YouTube and MySpace, or prepare your videos for other services. There are facilities for emailing videos or video greetings cards, although the video is actually served from the Web in both cases. 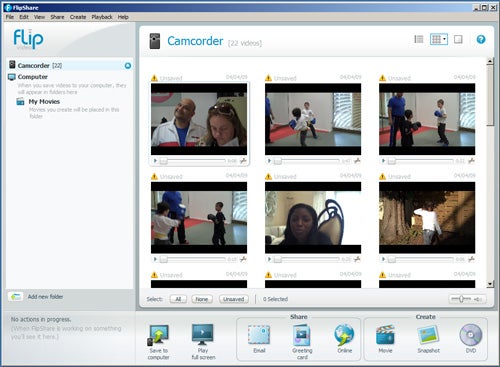 There are even modest editing facilities. As well as trimming the in and out points of each clip, you can arrange them together to create a longer work, and then add titles and music. You can even prepare a video for burning to DVD, although the actual disc writing will need to be performed by a third-party app. If you’re not a video editing enthusiast, FlipShare could be all the software you ever want.


However, the Mino HD falls behind Creative’s Vado HD should you want to watch your footage directly on a TV. Where the Creative has a mini-HDMI port built-in and comes with a cable so you can hook this up to a full-sized HDMI port on your HDTV, the Mino HD only offers analog connectivity. Even worse, the cable supplied provides composite video alone, with no option for component. In other words, you won’t be able to watch your footage in HD on a TV directly. 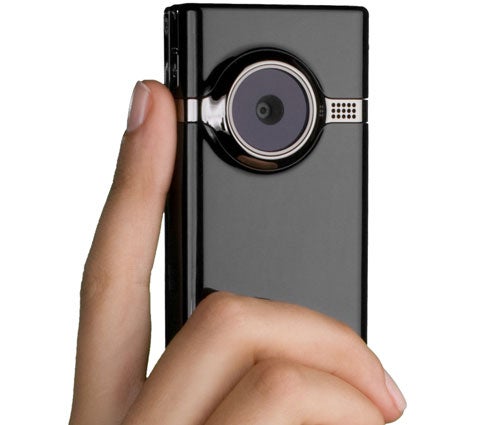 
Flip still has the biggest name in the pocket Internet camcorder market, and with Cisco recently acquiring the company it will have the marketing muscle to maintain its brand. However, while the Mino HD comes in £30 cheaper than Creative’s Vado HD was at launch, the Vado HD has since come down in price, has double the memory and HDTV output. So, although image quality is similar, if you’re looking for an HD video pocket pal, Creative’s interpretation will be the better option.