The Flip Video devices have redefined our expectations of what a camcorder should be. The Ultra may have been beaten to the UK market by Vado, but it was clearly the first of its kind in the US, and its format has now even been copied by Kodak with its Zi6. Compared to its competitors, though, the Ultra may offer more sophisticated software, but its chunky form lags behind on the design stakes. Enter the Mino, which has taken the Flip on a diet.


Where the Ultra weighs 147g, the Mino is less than two thirds the size at 93g. It’s also a little shorter and less wide, but most importantly half as fat. So it will slip even more easily into a jacket or trouser pocket. The overall design styling is very similar. However, whilst the Ultra is available in white, black, pink and orange, the Mino can only be purchased in black or white. The glossy finish also gives it a slightly classier, iPod-like feel. 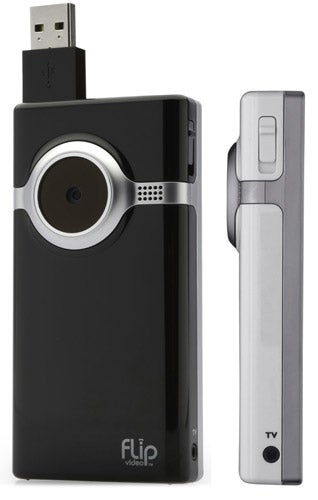 Internally, however, the Mino is virtually the same as the Ultra. It uses an identical 1/4in CMOS sensor, recording video at 640 x 480 video at 30 frames per second. The data rate is fixed at 4.5Mbits/sec, recording as a MPEG-4 AVI. The compression firmware is Flip’s Video Engine 2.5 rather than the 2.0 version in the Ultra. But you still get 2GB of onboard memory, which is enough to store up to 60 minutes of footage, and there is no slot for expanding capacity.


The 1.5in TFT is the same, too, offering 528 x 132 pixels. And, of course, it still has the trademark built-in full-size USB plug which flips out, providing the source of the Flip name. The TV output socket has shrunk from 3.5mm minijack to 2.5mm microjack. But you still get the necessary cabling in the box to hook up to a TV via composite video and stereo RCA audio, something which is an optional extra with Creative’s Vado.


Apart from the difference in size, the biggest change with the Mino is the switch from removable AA batteries to a fixed rechargeable unit. This has positive and negative sides. First, it’s almost certainly a major reason for the reduced proportions. Pure Digital also claims you can get four hours of use from a single charge, whereas regular alkaline AA batteries last just two hours in the Ultra.


However, whereas you can pick up new power cells for the Ultra virtually anywhere in the world, the Mino will require a nearby USB socket and time to recharge, as this is the only option. No USB charger is included in the box, either. So you will either need to invest in one, or take your laptop with you on holiday.

In terms of camcorder features, the Mino is as limited as the Ultra. The real buttons have been replaced with touch-sensitive ones, but there are precious few new abilities. You can pause and fast forward when playing back, which you couldn’t on the Ultra. But the only settings available are changing the data and time, plus whether the device makes noises when you press buttons. The 2x digital zoom is the only configuration you can alter during shooting. There is no manual focusing, no aperture and shutter, not even scene modes to think about. 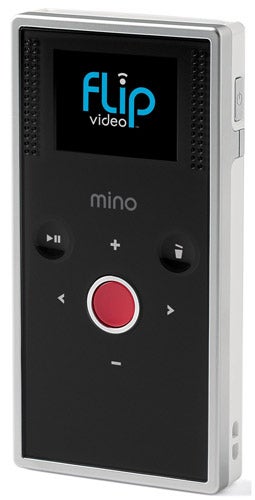 The biggest revelation with the Flip Video Ultra was how well it performed in low light – although this isn’t such a surprise considering the fairly large 1/4in CMOS. The Mino, with an identical sensor, performs just as well. In optimal lighting conditions, the image isn’t exactly pin-sharp, particularly if you’re getting used to HD camcorders, and bright colour graduations tend to run into each other, losing distinction. But overall the results are far beyond what you would expect for a camcorder in this price range, beating camera phones and most digital cameras hands down.


Drop the light levels further, and the Flip Mino impresses still further. In the average living room, lit by one or two ceiling lights, the Mino still retains plenty of colour and shoots bright-looking video. This is a key ability, as a lot of family events will take place in these kinds of lighting conditions – exactly the sort of shooting this camcorder is aimed at. In this respect, the Mino actually outperforms budget big-name camcorders costing twice the price. However, drop the lighting further and the image does begin to darken. Few camcorders produce an image worth using in the equivalent of candle light, with the exception of Canon’s recent HD models, so this isn’t a particularly damning failure


The slightly smaller form factor means the Mino will only focus to 1m rather than 80cm. However, in practice we found that shots closer than a few metres looked quite blurry, thanks to the fixed lens. So macro shots are not its forte either.

Despite its reduced size, the Mino still incorporates Pure Digital’s reasonably featured software. This loads from the device itself. Just plug in the USB port, and the app starts up automatically via autorun, then loads the required video codec if nothing compatible is detected. The app has quite a few features, considering its device-resident running. The headline act is of course the ability to upload directly from the device to AOL Video, YouTube and myspacetv.com. 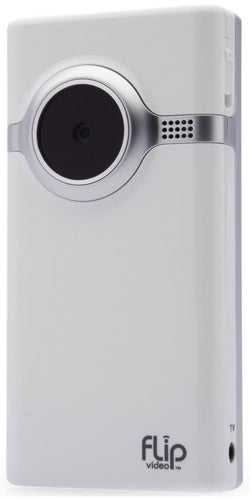 But you can also share video via email or as a greeting card, although in both cases the video is actually uploaded to the web and delivered from there. The key feature in the Flip’s software is its editing ability. You can trim the in and out points of your clips, and then combine clips together using the Muvee automated editing system. This provides six different style options, plus musical backgrounds, creating a quick edit for you. Kodak’s Zi6 offers editing too, but this portion of the software must be loaded from CD.


It’s no surprise that the Mino is being marketed alongside the Ultra, rather than as its replacement. Where it gains on style and pocket friendliness, it loses in holiday practicality thanks to the use of a rechargeable battery. So which of the two appeals to you depends on whether you fancy a pocket camera to take out on day events – in which case the Mino should be your choice – or for longer stints – where the Ultra will be better suited. Either way, the results will be surprisingly good in all reasonable lighting conditions, so long as you are primarily focused on sharing your video online.