The Flip defined the genre of the pocket Internet camcorder. But now there’s plenty of competition in the format, and most of the traditional names in the camcorder business have joined in too. Nevertheless, the Ultra has developed incrementally. The latest third generation of the UltraHD has a few significant enhancements, but you’d be forgiven for mistaking it as the old one.


One of the most important changes is to the shooting format. All of Flip’s current HD range shoots 720p resolution footage, but whereas the previous version recorded at 30 frames per second, the new one uses 50 frames per second, so fast motion should look smoother. The quantity of onboard memory has been doubled, too, with 8GB supplied now instead of 4GB. But the recording data rate is still 8.8Gbits/sec, so this also equates to a doubling of capacity to two hours.


The new UltraHD also sports image stabilization, still a relatively unusual feature in a pocket Internet camcorder, and a clear differentiation from a smartphone with 720p video shooting abilities. It’s only the digital variety, as the lens is fixed, but any stabilization is welcome in a camcorder which is likely never to see a tripod in its life. During testing, this didn’t appear to be as powerful as the advanced systems now employed by a number of mainstream camcorder manufacturers, although it was having some benefit.


The final enhancement is unique to this UltraHD model. On the bottom is a new proprietary connection which is dubbed the FlipPort. This is intended for a range of peripheral add-ons. Flip is talking about a wireless microphone, battery extender, external storage and a pico projector, but none of these have seen the light of day just yet. So whilst it sounds like a route to greater fun and function, we’ll have to reserve judgment. With the addition of the FlipPort, the HDMI connection has been reduced in size still further, from mini to micro, and no cable or adapter is included. There’s no analogue output option at all, either. The HDMI connection is actually part of the FlipPort array. 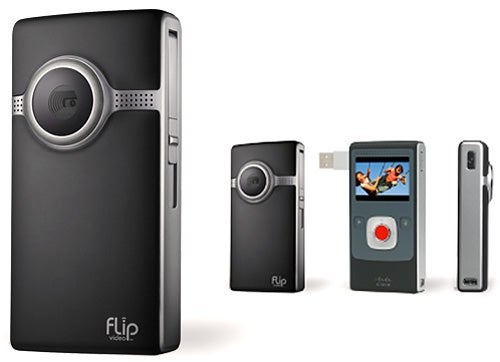 One element that hasn’t changed is the sensor. This remains the same 1/4.5in CMOS with 1.6-megapixels as is used across Flip’s current range. Since the UltraHD only shoots video, only slightly more than half of the pixels are actively used. There’s no photo mode to call upon the full resolution of the CMOS sensor. But with many mainstream HD camcorders still using 1/6in sensors, it’s large for its class.


The Flip doesn’t add any shooting features over previous models, either. Where JVC has put some mainstream camcorder capabilities back into the pocket Internet format with the likes of the PICSIO FM2, Flip stalwartly keeps things simple. There’s no settings menu to call upon during regular shooting, just for initially configuring the camera. The only function available when recording video is therefore the zoom. This is just of the digital variety, as the lens is fixed, so will cause a reduction in video resolution when used. Other than this, the big red button in the centre of the device is almost all you will ever use.

The new UltraHD takes a very flexible approach to power supply, though. In the box you find a rechargeable pack which will last for around 1.5 hours of shooting. But the same battery compartment will also accommodate a trio of AAA batteries, so you can call upon regular cells in an emergency. However, Flip claims regular batteries are for backup only, and won’t last as long as the rechargeable pack.


And, of course, the feature which most defined this genre of camcorder and gave the Flip its name remains: a built-in full-sized USB jack allied with built-in software. The FlipShare software supplied has matured quite nicely, too, and now offers most of what you need for a quick edit. Not only can you upload footage to the de facto YouTube, but current social networking darlings Facebook and Twitter are also included. FlipShare’s editing abilities are quite reasonable as well. You can trim the beginning and end points of your clips, then string them together, add opening and closing credits, as well as background music. 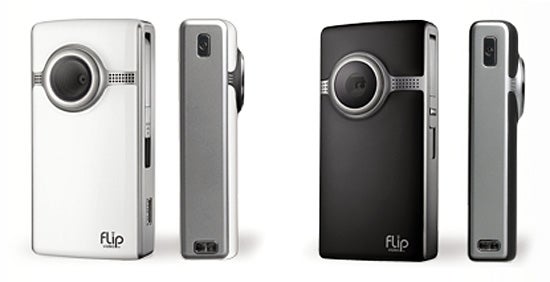 We’ve consistently been surprised by the image quality afforded by Flip’s camcorders. Although they cater for the simplest point-and-shoot user, and sit at the budget end of the price range, Flips traditionally sport larger sensors than budget camcorders used to offer, and certainly than any current smartphone. This particularly enhances low light performance, and the UltraHD 8GB carries on this tradition. Colour and detail are maintained to a reassuringly low level of illumination, and colour fidelity is also decent.


Budget mainstream camcorders are now providing more competition again, such as Samsung’s HMX-H200 with its back-side illuminated sensor. But Flip’s UltraHD 8GB will capture your footage under most lighting conditions, and crucially during those indoor situations where artificial illumination leaves a lot to be desired, which is the most you can ask for in a camcorder costing under £150. Performance in good lighting is less surprising, but still reasonable for a camcorder at this price.


The Flip was a minor revolution in camcorders, but it’s far from unique now. The waterproof Kodak Playsport Zx3 and low cost Panasonic’s HM-TA1 are both available for well under £100, and even though you have to factor some SDHC memory into their prices, they still make the UltraHD 8GB look expensive. Conversely, Sony’s Bloggie Touch MHS-TS20K and JVC’s PICSIO GC-FM2 add more features for not that much more money. So a lot is riding on the FlipPort. Let’s hope the peripherals are worth waiting for, as otherwise the third generation of Flip’s UltraHD doesn’t add enough or come in cheap enough to be as revolutionary as its predecessors.