What is the Flic?

Flic describes itself as a smart Bluetooth button, which is able to control hundreds of apps and services with a few clicks. Put simply, if you’d usually use your smartphone to do something then you can probably program Flic to do it instead.

It started life on Indiegogo in 2014, smashing its $80,000 target to raise almost $1 million in two months. Two and a half years on, the Flic is now really getting into its stride, with availability worldwide and a partner list that continues to grow.

While it isn’t a perfect solution right now, it’s an interesting and accessible way to have a bit of fun with your connected apps and devices, and one that will only get better with time.

Flic is a small, soft-touch silicon button – no wider than a 10p coin – that has a satisfying click to it when you press it. It stands no more than half an inch tall, and is available in black, white or turquoise.

On the rear is a removable, reusable sticky pad, with which you can fix your Flic to just about anything. There’s enough stick in the pad to enable movement of it several times, but for those who are super-indecisive about placement, you can peel off the pad and wash it to renew its stickiness. Note that there’s also a clip included in the box for attaching your Flic to clothes or bags.

The Flic comes with a coin-cell battery, which should last up to 18 months. To replace it, simply stick the Flic down and give it a twist to remove the back panel.

The Flic app for Android or iOS sits at the heart of the Flic experience, and as well as helping you to get the most out of your smart button, will also aid to get it up and running.

Ensure your device’s Bluetooth is turned on, and it’s a very quick process indeed. A single press had my Flic automatically picked up by the app and ready to go in less than a minute – no digging into phone menus required. If you have more than one Flic, you can continue adding them here, and then access them all from the app’s homepage.

There are three programmable actions with every Flic – a single click, double-click or a click and hold. For each one, you need to choose from a list of options what each click will do, selecting a single action or a number of different ones that will all execute at once.

This is good for sequences, such as turning off your Philips Hue lights at the same time as setting your morning alarm and pausing your music, for example. These ‘Flics’ as they’re known can be deleted or altered whenever you want.

Your tasks can even be set to appear in the Notification Centre on iOS devices for easy lockscreen access. However, during my testing with an iPhone 6s, their appearance there was rather hit and miss. Instead, the box was often empty, with an “Unable to Load” message in place of where the tasks should be. 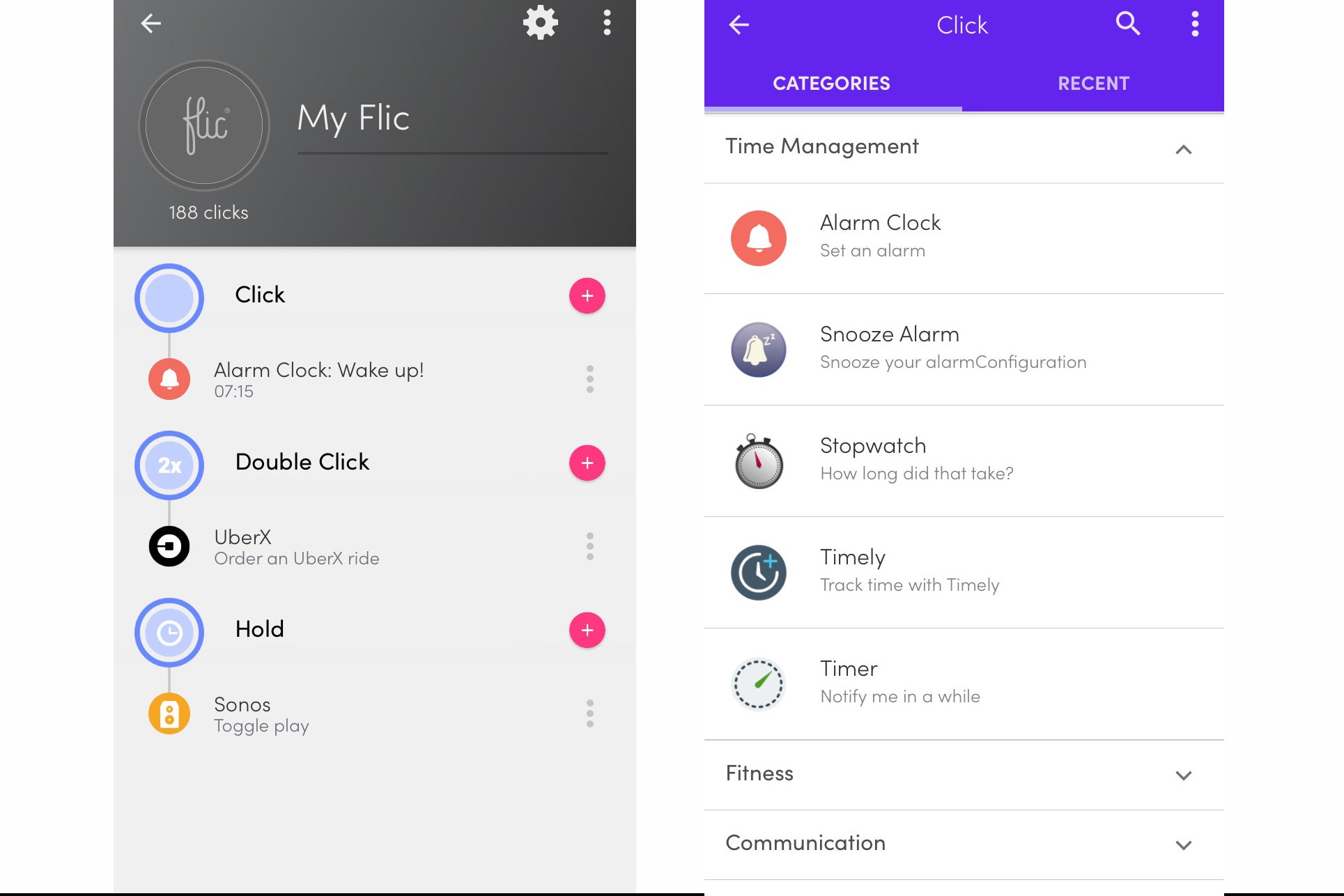 At the moment, if you have an Android phone, you’ll get a little more out of the Flic than iPhone users, due to a number of Android-only options. The iOS app is catching up fast though – and, thankfully, most of the main functionality now features on both.

The options that are available to you will vary based on your location. You’ll be able to control basic phone operation such as setting or snoozing alarms and firing the camera shutter no matter where you are – but it’s the cooler functionality that makes Flic really interesting.

In the UK, this includes the ability to order an Uber, control your Sonos playback, and manage all manner of smart lighting. There’s even a tie-in with Volvo that will allow you to control multiple functions in your car with a press of your Flic.

However, probably Flic’s greatest potential is shown through the IFTTT (If This Then That) website, which has lots of pre-programmed smart home sequences for you to apply to your Flic.

In fact, there’s a whole Flic hub with numerous IFTTT options to choose from, including support for actions and services not shown natively within the Flic app, such as Nest. 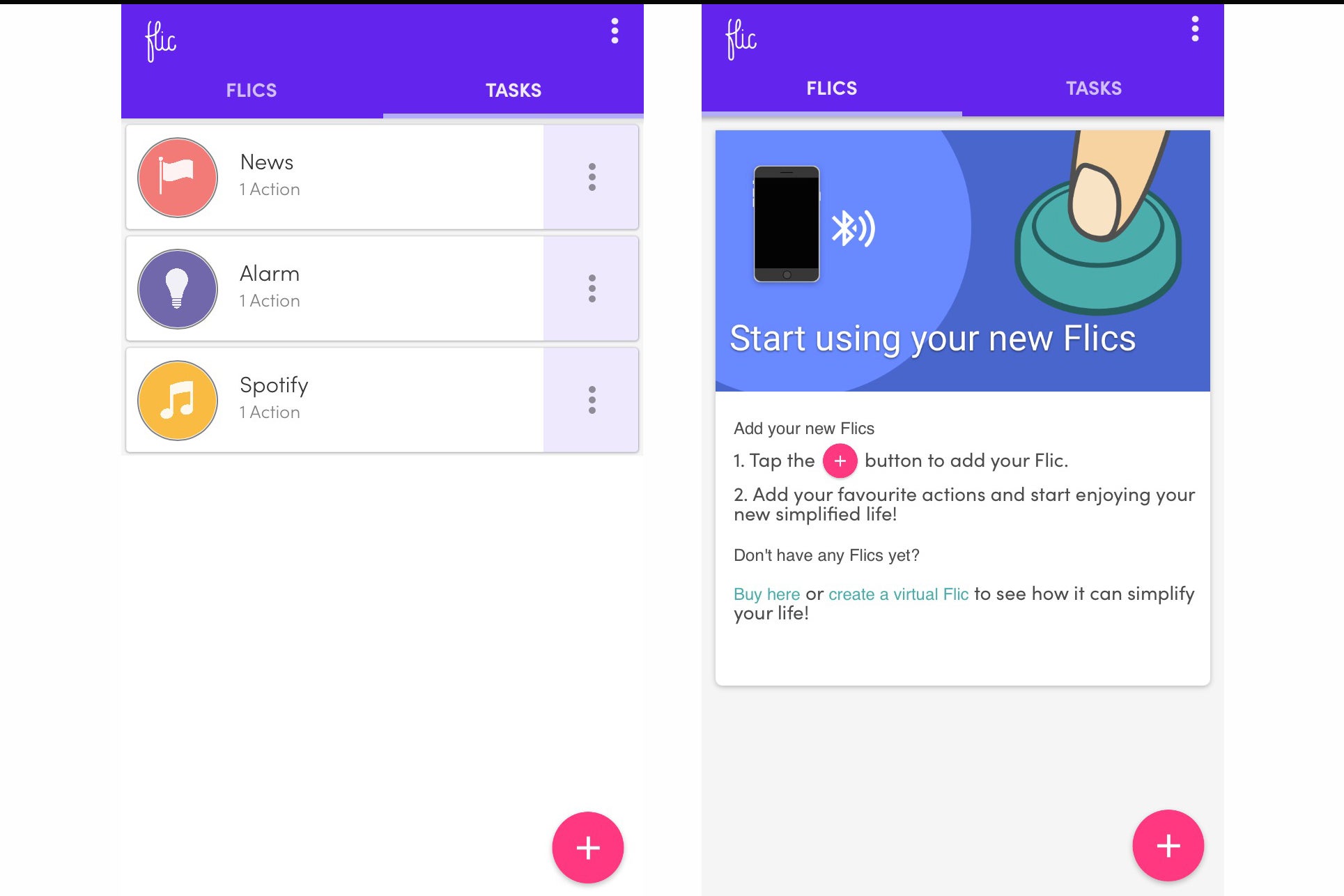 Flic works well with both single click and click and hold commands, but I often struggled to get double-clicks to register. It was rather hit and miss; often a double-click would trigger the single-click command instead. Depending on what that is, you could find that very frustrating indeed.

Similarly, the single click does need a very short hold to register – the app will make a sound to let you know when it has – but hold it down too long and you’ll trigger the click and hold action instead. More than once I blasted music through my bedroom’s Sonos speaker at midnight instead of setting my alarm – much to the delight of my sleeping husband…

This is something I managed to get the hang of during testing, but it wasn’t meant to be with the double-click. In fact, it failed so often I ended up leaving it blank, setting a Flic Task for that command instead. This proved far more reliable; it’s just a shame its handy iOS Notification Centre functionality was so hit and miss.

Should I buy the Flic?

There’s no doubt that the Flic is easy to use, offering a simple setup process and a well-designed app. At £30 a button – it’s cheaper if you buy a bundle – it’s pretty accessible too, and if you fancy adding some analogue flair to your smart home system, it isn’t a bad way to do it.

There are some usability niggles that affect its reliability, and you’ll need to have your phone within a decent range of your Flic (up to 50m) for it to work too. However, following a week of use, it became a button that I used regularly as part of my small smart home setup; I found it particularly useful for controlling smart lighting.

The more connected tech you have, the more you’ll be able to do with Flic – plus it’s only going to get better as more services and apps are added.

Some functionality issues aside, the Flic smart button shows plenty of promise.