See the seven lurking somewhere at the top of this page? It’s a sad seven – a seven that could have been so much more. The fact is that, in my opinion, FlatOut: Ultimate Carnage is so close to being the best arcade racer on the planet that it hurts.


To those of you who haven’t come across the franchise before, this might be a surprise. Despite awards and critical acclaim, FlatOut has sometimes been dismissed as the dumb country cousin of EA’s brilliant Burnout series. Both series focus on high-speed, adrenaline fuelled arcade racing with an emphasis on vehicular destruction, but where Burnout made its name with sleek machines and glossy, predominantly urban environments, FlatOut takes its action into the boondocks, with the tracks running around – and through – hick lakeside resorts, timber yards, industrial towns and farmsteads. You might want to go on holiday to Burnout-land (though you probably wouldn’t want to hire a car) but a visit to FlatOut-ville would probably be a bit like Deliverance. 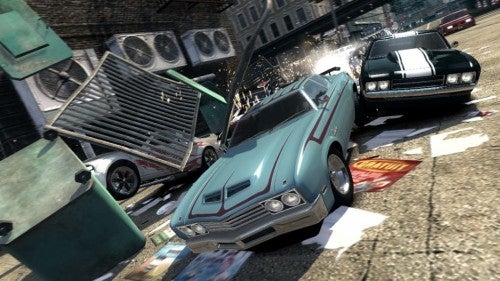 Now, FlatOut hasn’t got Burnout’s killer feature – traffic – but it offers an alternative with arguably the most interactive and destructible environments of any racer. It copies Burnout’s boost system with a similar gauge powered by damage caused to the environment and inflicted on either competitor cars or the player’s own ‘rag-doll’ driver. And while Burnout has its Crash mode, FlatOut has its destruction derbys and stunt modes, where players compete in a series of bizarre events centred on throwing the driver through the windscreen at high speed towards a set of skittles or a series of flaming hoops. In fact, last year’s FlatOut 2 aped Burnout’s slick presentation and shouty music soundtrack to the extent that it was getting difficult to tell which was which. 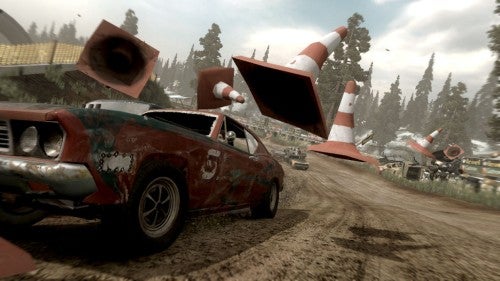 Of course, this doesn’t really do justice to either game. At its best, Burnout is all about the near-miss; about plotting your way through the traffic, taking calculated risks, chaining boosts together and avoiding collisions. FlatOut is all about destruction. Each track is festooned with rickety buildings, fences, oil tanks, carelessly abandoned furniture and scrapped vehicles, and the vast majority of it is designed to be knocked about, wrecked and destroyed. Carving your way through it isn’t just a vandalistic pleasure – it’s also a way of earning vital supplies of boost, and the same goes for smacking into rival cars. Think of FlatOut, then, as the sort of game that Jeremy Clarkson, Quentin Tarantino and Johnny Knoxville might come up with if they had been put in charge of the Burnout franchise.

This might not sound like the foundations of a great arcade racer, and neither will the fact that FlatOut: Ultimate Carnage is essentially a reworking of FlatOut 2, but for the Xbox 360. However, where other developers would be content to slap an extra layer of polish on the Xbox version and release it like that, Bugbear has taken the opportunity to make a kind of uber-FlatOut; a FlatOut with everything turned up to eleven. 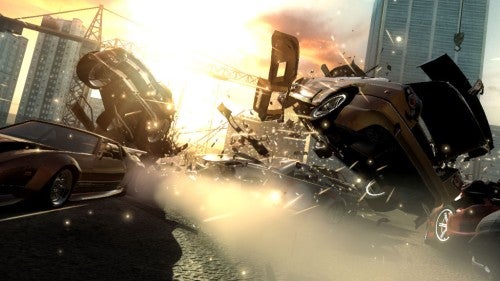 Let’s start with the graphics. We could compare polygon counts and dynamic lighting systems, but all you really need to know is that Ultimate Carnage takes one of the best-looking racers of the last generation and makes it one of the best-looking racers of this one. Colin McRae: DIRT trumps it for realistic detail, and the car models – all inspired by rather than based on real cars – don’t match up to those in Forza 2 or Project Gotham 3, but what impresses is the sheer amount of stuff being thrown around by the engine without slowdown. At any one moment there can be eight or nine cars, rich vegetation, shattered scenery, showers of particle-based spark effects and oodles of rippling, splashing, reflective water all competing for attention on the screen, and yet the frame rate seems happy to sit at darn near 60fps. In motion, Ultimate Carnage looks utterly fabulous.


More importantly, Ultimate Carnage packs in more cars and more destructible scenery into each and every race. Upping the car count from FlatOut 2’s eight to twelve has a huge impact on the gameplay. A game that always offered frantic, edge-of-the-seat racing is now even more frenetic. Trust me – you can’t afford to blink for a second. Add in all those extra objects to the scene, and there isn’t a moment of the race where something isn’t exploding or being thrown around. Thanks to an exaggerated physics model, smacking into things doesn’t just damage the car – it sends everything from tyres to fence-posts to cafe chairs flying out in your path, and causes whole structures to collapse in your wake. 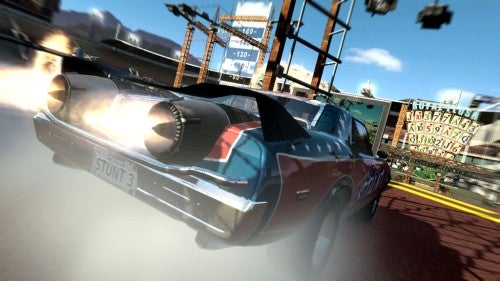 The tracks are excellent too. Alternative routes reward attentive replay, and while Bugbear has cheated a little through the old Ridge Racer trick of featuring tracks in forwards and backwards variations, you can’t moan too much about variety. Maybe the settings aren’t as wide-ranging as those in recent Burnouts, but these forests, mountains, timber-camps, urban waterways and desert towns still give you plenty to look forward to as the game develops. Put it all together and you have a killer combination of speed, spectacle and vehicular violence that threatens to leave Burnout in the shade.

What’s more, Ultimate Carnage has an awful lot to keep you occupied long-term. The main single-player mode is itself split in three, with dirt-track Derbys (trashed-up bangers and backwoods tracks) giving way to the Race class (cool muscle cars and custom 4x4s) and Street Racing (high-speed sports cars in wild, urban settings). To proceed, you’ll need cash to buy vehicles appropriate to each class, and to get that you’ll need to win a series of tournaments and unlockable time trials and destruction derby events. On top of this, Ultimate Carnage introduces Carnage mode, which organises the old rag-doll stunt events and a number of special, destruction-heavy race events into a grid of unlockable activities. Once unlocked, races and events can also be played one-by-one. Meanwhile, multiplayer options include races, stunt events and destruction derby deathmatches on Xbox Live, and a cool party option where one to four players can compete in stunt events for the amusement and edification of all concerned. Really, what’s not to like? 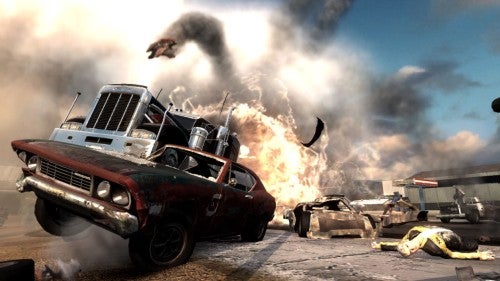 Sadly, something rather big. The heart of the game – the actual racing – is seriously flawed. Amazingly, the fault doesn’t lie where I thought it might: the handling. Perhaps I’ve just got used to it, but FlatOut’s old, horrid, floaty handling model seems to have been reined in, and there’s a much greater sense of traction between car and road this time around. Cars and 4x4s behave pretty much as you might expect them to according to speed, acceleration and mass, and with a bit of practice you get a feel for the game and for the tracks. 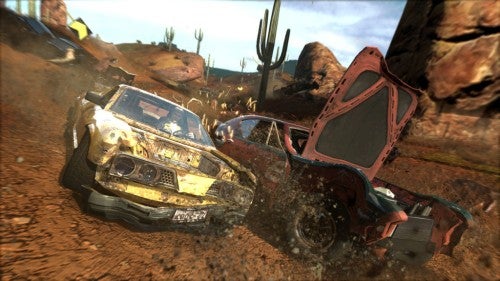 Nope, the flaw isn’t the minute by minute feel, but the way each race progresses. FlatOut demands aggressive play, and features AI drivers who play mean. There’s nothing wrong with that as such; the competition can and does make mistakes and it should be capable of giving you a rough ride. However, the pack moves fast and bunches and – I suspect – there’s a little old-school rubber-banding going on. In any case, make a mistake and slam into something immovable and you can drop from second place to seventh place in a heartbeat. If this happens at the end of the third and final lap, it’s heartbreaking.

To make this worse, the mistake doesn’t actually have to be yours. I’ve lost count of the number of times where an opponent has spun out in my path or come up too aggressively from behind, leading to a race-wrecking spin or a collision. At other times a gentle nudge from you leaves them ‘glued’ to your front, slowing your progress to a crawl. To be fair, the game softens the blow with a quick track reset feature and a practically instant race restart, but it’s a bit worrying when I start thinking that one of a game’s best features is how quick it is to restart the race after I’ve had it stolen from me at the last minute. In the end, winning doesn’t seem to be as much about speed, daring or skill as it is about keeping your toes crossed that nothing messes up this time. 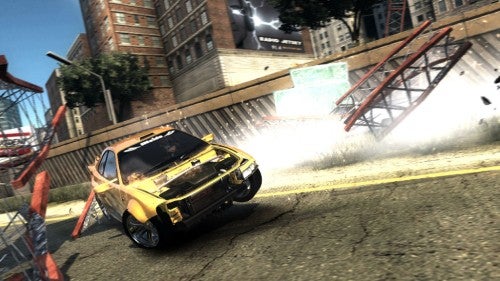 Still, the game still has something. Even though the game drives me to despair, I keep on coming back for more. What’s more, the formula works surprisingly well online. It might help that the action is restricted to eight competitors, but Ultimate Carnage has given me some of the smoothest, most exciting racing I’ve experienced on Xbox Live, partly because your human opponents make genuine human mistakes (always easier to forgive than AI foul-ups) and partly because they’re not so inclined towards Kamikaze cornering techniques. Online destruction derby deathmatches work surprisingly well to boot, making Live functionality a major plus point. 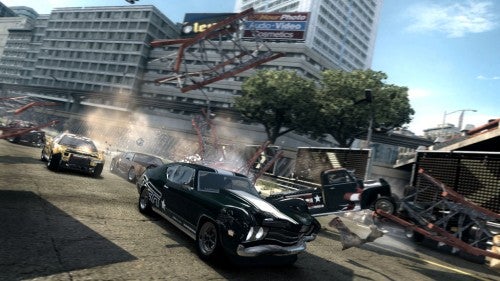 Overall, however, Ultimate Carnage is the arcade racer that nearly had it all. In terms of graphics, tracks, game modes, presentation and handling it’s easily up there with the best of Burnout, Ridge Racer or Need for Speed, and it’s only the music – a mostly appalling mix of bands that sound like Limp Bizkit and Nickleback – that lets the side down. But when a game annoys and depresses you so much that you feel like just tossing the controller away and reaching for the off-switch, something’s wrong. I don’t mind repeating a race until I know every curve and possible route if I feel that the fault that stops me winning is my own, but I do mind when it seems to be a matter of chance. Some of you might not be so easily put-off, but for me it leaves Burnout still sitting pretty, and still holding on to the arcade racing crown.


FlatOut: Ultimate Carnage lives up to the name, but sometimes all that aggressive attitude results in a frustrating game of chance, not skill. All that destruction looks pretty, but prepare to get very, very cross.