As a little experiment, you might like to take on Five Nights At Freddy’s 4 with your headphones out during your first, no doubt fretful, run. In fact, put the game completely on mute and see both how you, and it, fair. Played in completely silence, it’s an incredibly bewildering experience that comes to highlight just how much this latest entry in the Freddy’s franchise relies on one element: sound.

That’s because, whereas in previous instalments you’ve relied on your torch to keep you safe – scanning CCTV footage and looking down air vents, shining a light at anything moving in order to stop it in its tracks – here, it’s your ears that are designed to come to your rescue, even though the premise behind what you’re doing (and, indeed, just how you go about doing it) is largely identical.

What developer Scott Cawthorn appears to have done with Freddy’s 4 (at
least in its current form, with additional downloadable content promised
in the near future) is strip the game back to it’s foundations. Rather
than watching a series of animatronic – and rather menacing – animals
edge towards your position at the desk guarding a pizzeria through to
the early hours of the morning, you’re instead a little kid trapped in
your bedroom, running between four set locations. 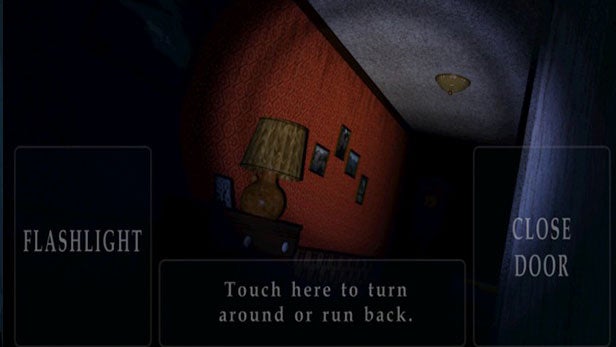 Ahead of you is a cupboard, curiously left half ajar, while behind you is your bed and to both your left and right two doors looking out into the rest of the house. As in previous games, sitting on your butt gets you nowhere and, instead, you’re encouraged to move between the aforementioned ports of call to check on the progress of your aforementioned foe. However, in Freddy’s 4, your torch is no longer your guardian – at least not all of the time.

Catch a beastie moving towards you from a distance and, yes, the torch will be enough to scare them off, but run to the door and flash your light just as your foe is standing at the threshold, and it’s game over. Indeed, your torch’s somewhat relegated state means that developer Scott Cawthorn has seen fit to do away with its battery – you can have it switched on all the time if you like, for all the good it’ll do you. As such, monitoring the monsters is now a question of listening, and as the game advises, before you run to either door way you’ll want to stop and listen for any signs of life before flashing on that torch. If you hear anything at all, your only method of defence is to hold the door shut for a few seconds, which is enough to buy you a bit more time. 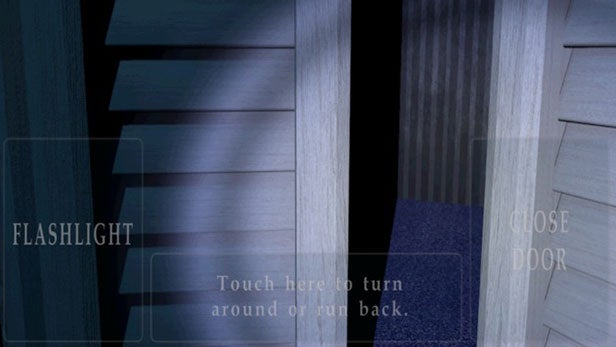 This one slight change, however, fundamentally alters how Freddy’s 4 plays, and it takes a while before you realise just how. While previous games used to build slowly, step by step, before climaxing in a massive crescendo of fear and panic, Freddy’s 4 is a little more black and white than that – it’s seemingly all crescendo. It feels like the gaming equivalent of those YouTube videos that encourages you to focus on a singular spot in the middle of the screen before shoving a decaying and screaming old lady in your face without warning.

The Five Nights At Freddy’s series has always had a bit of that sick spirit flowing through its veins, but in this release, that appears to be all it has. You can’t blame Scott Cawthorn for heading down this particular path, either. As anyone who witnessed me taking it on the first few times will attest, my initial deaths caused me to scream like a particularly hammy Doctor Who assistant from the 1980s. I can’t put it any simpler than this: Five Nights At Freddy’s 4 is scary. Very, very scary. 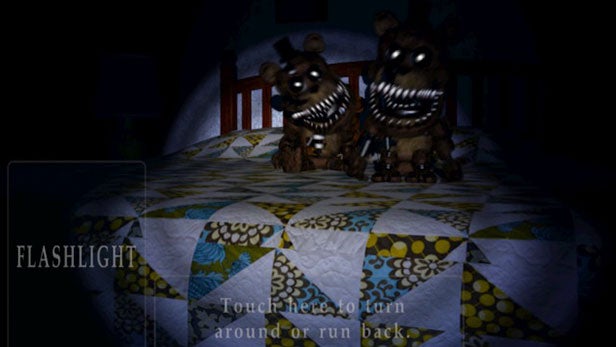 That, however, is pretty much all it is. Compared to previous outings, what’s on offer here feels rather one dimensional and a little rushed. It may well be that additional layers are added to what has previously seemed like a rich world (albeit at least superficially, with much of the franchise’s ‘depth’ coming from fan speculation about the series’ plot), but as things stand Freddy’s 4 feels a little token, a little succinct, a little half baked. Perhaps the scariest element of all is that, with a Warner Bros. tie-in movie yet to hit out screens, this may be an IP that’s already run out of steam.

Verdict
Stripping back the series’ signature voyeurism to just a few key spots, dumbing down the plot and focusing more on sound, Five Nights At Freddy’s 4 loses some of the richness of its predecessors becoming something of a one trick pony – a sign that, perhaps, this is one series that’s in need of either a rest, or a complete revolution.