“Whatever you do, don’t blink,” uttered the Doctor in what’s now regarded to be one of the most seminal episodes of Doctor Who in the show’s half century on air, Blink.

The man from Gallifrey was referring to the Weeping Angels – stone statues that can kill you in the blink of an eye, quite literally. As long as you look at them, they can’t hurt you, but that doesn’t actually make them any easier to deal with. What if the lights go out? What about if your attention is drawn away somewhere else? What if you, you know, need to blink?

It’s a quandary that the first Five Nights At Freddy’s fully embraced, charging you – a lone security guard being paid a pittance to mind a pizza restaurant through the hours of night – with taking on a bevy of deficient animal animatronics as they hunt you down in the darkness. It was a game of tension and suspense, with the threat of your downfall weighing far heavier than your downfall itself.

Five Nights At Freddy’s 2, like all inventive sequels, attempts to play with that formula a touch in an attempt to mix things up a little and, while it certainly refreshes what could easily have been something of a rehash, not all change is necessarily for the good. Arguably, in the pursuit of cheaper thrills, developer Scott Cawthon has sacrificed much of the original’s intensity in favour of gameplay that’s a touch more hectic. 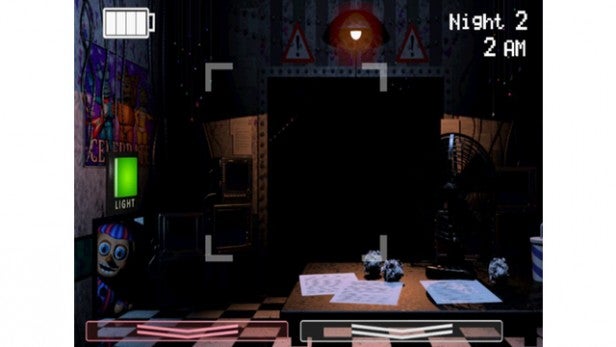 At its core, much of the structure of play remains the same. Your main tool is switching between a series of security cameras that keep watch over the rooms leading up to your office, with the flicking night vision lenses panning across some particularly disturbing scenes; Freddy Fazbear’s Pizza might be bright and cheery for the kids who visit in the daytime, but at night, it resembles a carnival of pure horror.

Most of your time, therefore, is spent switching between said cameras to keep an eye on your animatronic neighbours, each one shuffling towards your position whenever your gaze is elsewhere. However, there are some major changes to play that significantly alter their approach. For starters, all the doors within the restaurant have been removed – amusingly referenced in the game’s opening brief from your boss as an attempt to make the place a little more contemporary – meaning there’s no place for you to hide. 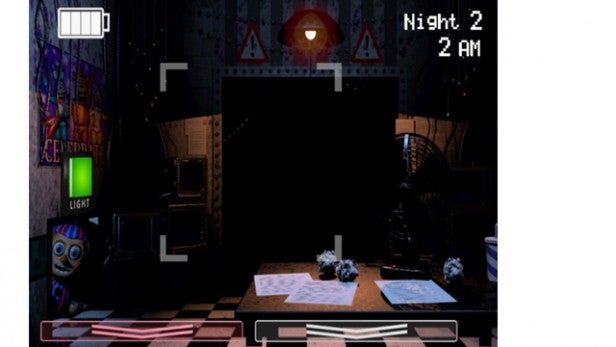 Instead, you remain rooted to your desk with just two real tools at your disposal; a flash light, which you can also use across any of the restaurant’s security cameras to briefly shine some light on the situation, and a Freddy mask, which disguises you as one of your animatronic enemies and, in the vast majority of cases, scares them off albeit briefly. Success, therefore, comes from knowing which tool to deploy at which time, with the battery on your flashlight running low especially quickly – should you drain it too soon, your death is simply a matter of time.

Your mask, too, doesn’t offer universal safety, and while it’s deployed you cannot use the flashlight or check the security cameras, meaning it is a literal last line of defence, to be flashed up whenever your enemies make their presence known. There’s one camera that, in particular, you’ll need to pay close attention to, as well: Housed within it is a particularly deadly animatronic kept in a slumber by a music box – one that you routinely have to recharge by holding your finger down on the screen. 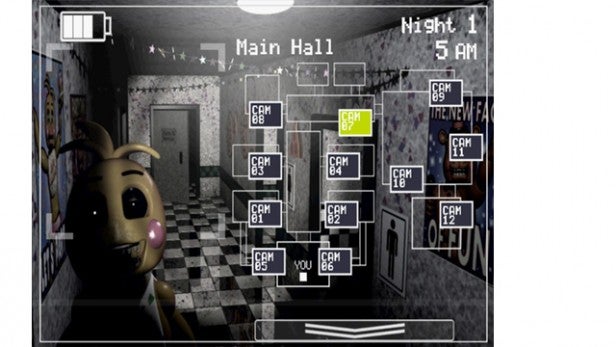 Though this starts as an interesting diversion, it soon begins to dominate your time, leaving precious few seconds to monitor any of the other cameras, the three ways into your office with your flashlight or, indeed, adopt your mask at the last minute. Much of the nuances that were smartly weaved into the first game, therefore, are blocked out by a rabid need to keep switching between the three – music box, mask and flashlight – and a rush of enemies that, rather than creeping up on you, very quickly begin to assault you much like an army.

After a fairly quiet but creepy opening night, the rest of the week is increasingly frenzied, with salvo after salvo heading directly your way. In essence, this turns Five Nights at Freddy’s 2 into a game of reaction times rather than strategy or suspense and, as a result, makes it a particularly unforgiving beast too: one wrong tap and it’s game over, with play dumping you right back at the beginning of the night. 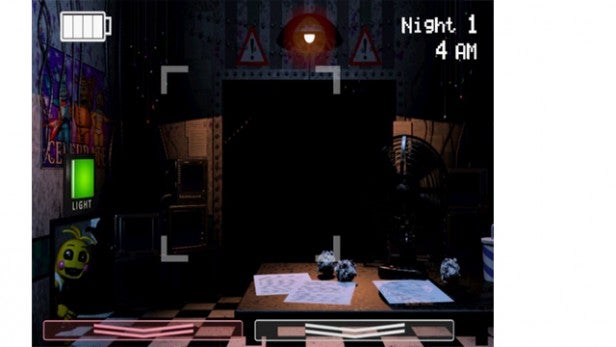 As a result, Five Nights at Freddy’s 2 lacks the carefully measured rhythm its predecessor mastered, leaving you twitching from one action to another without any real grasp of whether you’re enjoying or not. Luckily Five Nights at Freddy’s 2 s packed full of character aplenty and has a plot worth paying attention to – as you might expect, things aren’t as black and white as they initially seem in Freddy Fazbear’s Pizza, and there’s much here to keep you engaged.

Nonetheless, it’s hard to view Five Nights at Freddy’s 2 as anything other than a slightly botched attempt at a follow up, only serving to highlight just how well crafted the original was.

Verdict
Jammed packed with action, Five Nights at Freddy’s 2 lacks the poise of its predecessor and all too quickly descends into mania, with fear giving way to frenzy at a disservice to the rest of play. However, with character in spades, there’s still enough here to pull most Freddy fans through.