What is the Fitbit Charge HR?

The Fitbit Charge HR is the Fitbit Charge with the addition of a heart rate sensor to continuously track your heartbeat and deliver a more comprehensive log of your workouts and daily activity.

Still, the original Charge and Charge HR can often be found at a bargain price now that they’re older models, making them a compelling prospect for those who don’t want to stretch to the newer model. You’ll still benefit from the same improvements to the app that have been delivered over time as well.

Our original review of the Fitbit Charge HR continues below but be sure to check the Charge 2 review to see what new additions have been included and how the app has since evolved.

Strapping on the Charge HR so soon after the Charge is like playing “spot the difference”. It’s the same 21mm-wide strap and easy-to-view OLED display with single action button, but Fitbit has made some changes. The surface has a new textured finish, but it’s the more secure watch strap clasp that’s good to see here. While we’ve not had a Fitbit band fall off, it’s a positive move to opt for something that feels like it’s not going to budge, and that’s what you get with the Charge HR.

There’s still the option of small (5.5-6.5 inches) or large (6.3-7.6 inches) band sizes, but disappointingly, like the Charge, the Charge HR is only water-resistant to 1ATM. That means it’s protected against accidental splashes of water and sweat, but you can’t take it into the shower or go swimming with it.

The strap, which is made of the same elastomer rubber-like material as the Charge’s, has come under scrutiny recently, with some users reporting skin irritation when wearing it. This is after Fitbit recalled its Force tracker in the US back in 2013 due to similar complaints. While we can’t say we experienced any horrible rashes, we did find it occasionally itchy to wear, and that’s not something we’ve not experienced with other wrist-worn trackers. 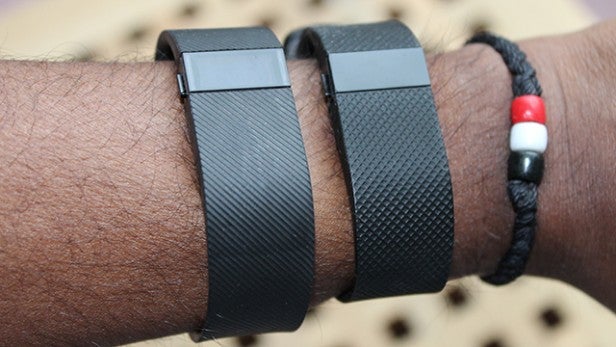 The cause of concern appears to be the nickel used in the band, which isn’t a great material to have against the skin. As a result, Fitbit emphasises the need to wipe the Charge HR and not wear it all the time, which seems odd if you want to track activity all day and night.

Away from the strap, the big new feature is the heart-rate sensor underneath the strap that sits against the skin to generate continuous heart readings on the OLED display. That includes resting heart rate, which should be around 68-80 beats per minute for the average user, as well as your heartbeat when you’re out running, so you get greater insight into how hard or intense your workout it. This information is important not only for maintaining fitness levels but also cardiovascular health. 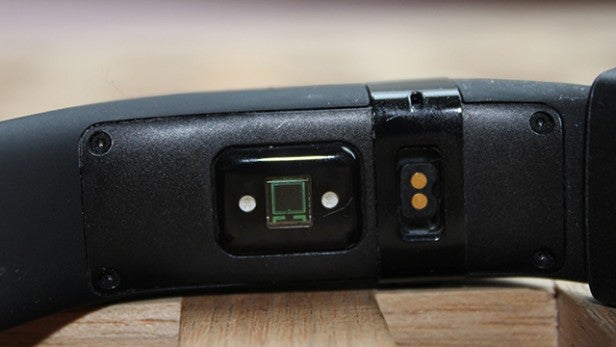 Fitbit uses a light-based optical sensor based on its own PurePulse technology, which works in a similar fashion to the Mio-based heart-rate sensors found inside the Adidas Fit Smart and TomTom Runner Cardio. A pair of green lights flash against the skin to detect blood volume changes and produce readings. This is in contrast to the way EKG chest straps measure the heart’s electrical activity, and is regarded as a more accurate way to record heart rate.

All the tracking you get on the Charge is supported, too. So the three-axis accelerometer and altimeter is capable of tracking distance, steps, and elevation, and estimating calories burned from that data. There’s automatic sleep tracking as well, which uses the accelerometer to detect movement or lack of movement to work out when the wearer’s napping soundly. You still get the silent alarms to gently wake you up in the morning, too. 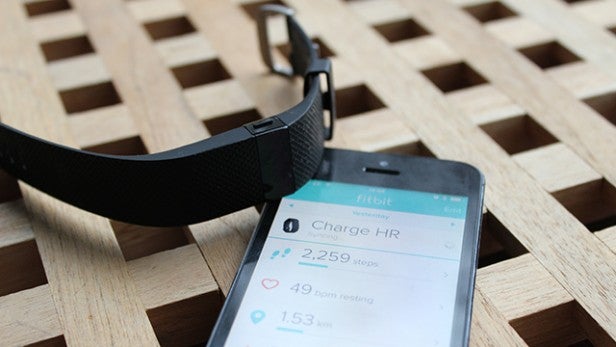 The Fitbit phone and desktop app remains one of the best fitness tracker companion apps for simplicity and ease of use. Data is displayed in a single column broken into the different categories, and tapping on the small arrows scrolls through the days. Outside of the automatically tracked activities, you can also manually log water intake, weight and food consumption, which now supports barcode scanning.

It’s compatible with the leading smartphone platforms, including Windows Phone, and like the Charge, data is wirelessly synced over Bluetooth 4.0, so make sure your phone supports the latest Bluetooth standard.

Syncing data to the desktop app is still unfortunately done via the small Bluetooth USB dongle. To ensure you get the most accurate data, it’s worth going through the settings, where you can choose adjust sleep sensitivity and whether you’re wearing the Charge HR on your dominant hand to compensate for extended use. You can also customise the display and turn off automatic heart-rate tracking.

What sets it apart from the competition is the comprehensive third-party app support. Fitbit has had a bit of head start on its rivals, having been one of the first trackers to introduce the ability to sync data from apps such as Endomondo, MapMyRun and Weightwatchers to the Fitbit app.

There’s less appetite, it seems, for integration with Apple Health and Google Fit platforms, although there’s a workaround for Apple Health using the Sync Solver for Fitbit application, if you do want to combine all of your fitness and health data in one place.

Social motivation is kept largely closed within the Fitbit ecosystem, where you can set challenges like scoring the most steps in the week or a weekend. The Fitbit Friends section also supports messages to offer some words of motivation or gloating that you’ve doubled your 10,000-step count. 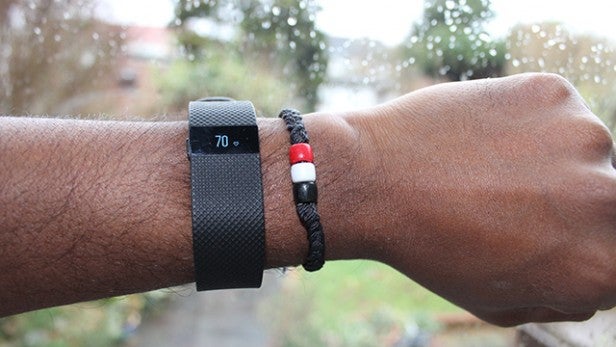 For data accuracy, the Fitbit Charge HR shapes up pretty well. It’s always important to remember that wrist-worn trackers are going to have a degree of inconsistency, especially with monitoring lower-body movement, which is why shoe sensors and Fitbit’s pod trackers are more reliable for measuring distance. 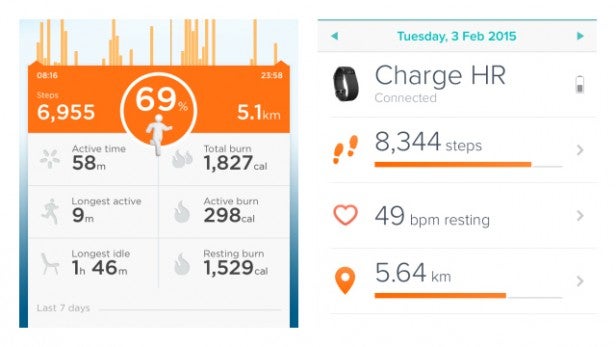 To check distance covered, we ran with the Fitbit Charge HR alongside the TomTom Runner GPS running watch and the RunKeeper iPhone app. The immediate problem with the Charge HR is that when you log exercise data by pressing the button on the band, it bizarrely doesn’t record running distance in the app, despite you being able to view the information during a run. Here’s what the average run data served up: 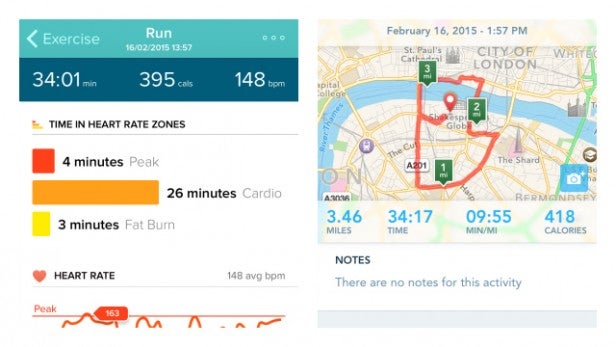 For heart-rate tracking, the Charge HR can measure resting and continuous heart rate. The average resting heart rate is between 60-80 beats per minute. As we’ve been running regularly over recent months, our average measurement was around the 50bpm mark. The app lets you see resting heart-rate data daily and weekly to see if you’re maintaining your resting bpm.

To test the continuous heart-rate tracking, we matched it up against Polar’s H7 Bluetooth heart-rate-monitoring chest strap paired with the RunKeeper iPhone app. What we get is an average BPM and the time spent in the heart-rate zones during the workout. Here’s how they compared: 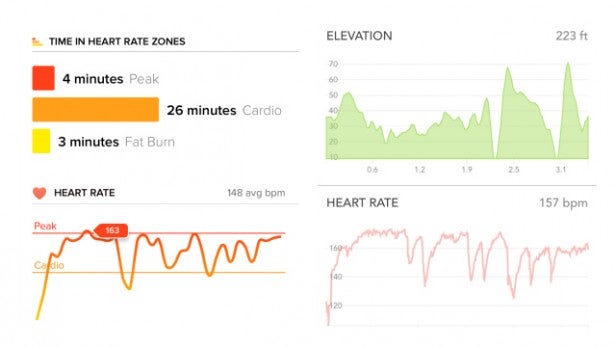 The Fitbit always scored lower than the Polar chest strap, but both suggested we were working in the same “Cardio” heart-rate zones. What it doesn’t show you is that the Charge HR on occasion is unable to deliver a reading in real time. This isn’t something we found with TomTom’s Runner Cardio, although the Adidas Fit Smart did suffer similar problems.

For sleep tracking we measured the Charge HR against the Withings Aura sleep monitor, which uses a tracking device that sits underneath your duvet. We also compared it to the Jawbone UP 24, where sleep tracking is manually logged. The Charge HR is roughly in the same ballpark, but data is very basic when you compare it to Jawbone and Withings trackers. 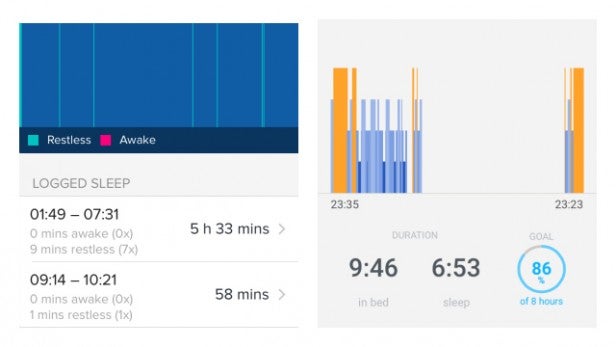 Accuracy is just a part of what trackers need to do. Staying motivated is equally as important and in that respect, the Charge HR is lacking. There’s no inactivity alarm, while notifications to warn you that you’re behind your step goal come through your smartphone and so aren’t that effective. Once the band vibrates to tell you you’ve hit your step count, that’s it. It could take a leaf out of Garmin’s book and automatically adjust targets. With heart-rate tracking being the key feature, Fitbit simply doesn’t make a big enough deal about it and could benefit from adding heart-rate-based training, which is well implemented on the Adidas Fit Smart.

Our initial worry with the addition of a heart-rate sensor is battery life. Fitbit claims up to five days with the Charge HR, which is down to two days on the Charge. If you have the heart-rate sensor on continuously and use the exercise logging feature regularly, it’s more likely to be four days than five. You can get roughly a week, though. Annoyingly, charging is done via a proprietary charging cable, which can power the tracker back up to full charge in a couple of hours. 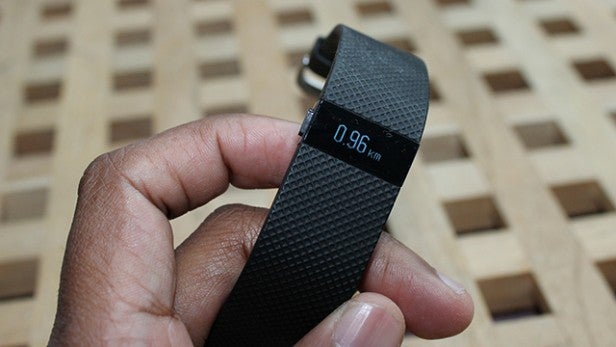 Should I buy the Fitbit Charge HR?

The problem with the Fitbit Charge HR is that it’s trying to be two things and doesn’t really excel as either. Adding a heart-rate sensor is all good and well, but Fitbit hasn’t really seized the opportunity to make the best use of it. It feels like a missed opportunity and by the end of testing, we weren’t too fussed about taking the HR off.

While we don’t question the reliability of the data, what’s really lacking is the analysis of that information and the presentation of it in a way that will help you make improvements. We continually refer back to the Jawbone ecosystem, where it actively tries to help you make changes, and it feels like Fitbit hasn’t taken that next step.

If you have £120 to spend on a fitness tracker, save it for the Jawbone UP 24 or Garmin Vivosmart. The UP 24 doesn’t have a heart-rate sensor, but it’s the best for making sense of your data, while the Garmin band is waterproof and packed with more motivational features that will appeal to serious athletes who want something to track activity. For something with more insightful heart-rate tracking, we’d say go for something like the TomTom Runner Cardio. You’ll have to pay more, but you’ll get better value from it.

The Fitbit Charge HR is a good fitness tracker, but it needs to do more to win its place upon your wrist ahead of rival bands.