What is the Fitbit Charge?

The Fitbit Charge is the wrist-worn activity tracker successor to the Fitbit Flex and the Fitbit Force simply under a new name. That means you get the built-in OLED display and smartwatch-like features without the skin irritation issues that forced Fitbit to pull the Force from the shelves in the US.

Priced at £100, the Charge is slightly more expensive than its predecessor and while the most of the new features are welcome ones, it’s a tracker that is beginning to lag behind more cutting-edge alternatives.

If you’ve seen or owned the Fitbit Flex, then the Charge will feel very familiar. Available in slate, black and plum shades, the first thing you’ll notice is that the materials on show are largely the same, but the band is wider and now packs a screen of course. It’s not a dramatic jump in size, although it takes away a some of the discreetness in comparison to the Flex. Fitbit has scrapped the removable pod sensor, which now lives behind four screws underneath the flexible plastic rubber strap and means you now have to hook the sleeker charging cradle directly to the body.

It retains the same stainless steel clasp to secure the Charge around the wrist although we’d have prefered it pierced through the strap a little deeper to make sure it’s truly secure. Thankfully, the ridged finish on the top of the strap, which did not feature on the Force, is not a minefield for picking up muck in the same way that the Sony Smartband does.

The Charge is water resistant, but only to 10m (33ft), so it’s not meant for swimming with sharks – although it remained fully functional after accidentally leaving it on in the shower.

The strap is the major talking point here especially after the issues with the Force. Fitbit says it now uses something called ‘durable elastomer’, which is a similar material used on sports watches like the Suunto Core. Despite some reports of the same irritation with the Charge, we had it around the wrist continuously during the day and night and experienced no issues. The Charge is actually very comfortable to wear. Fitbit suggests its trackers are posed with the same problems faced by most wrist worn devices when soap or sweat gets trapped between the device and the skin, so it does advise users to occasionally give it a wipe when you are not wearing it. 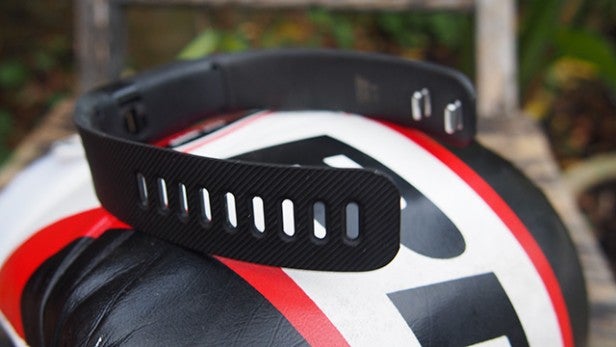 The biggest new hardware addition is the screen, something we were disappointed not to see included on the Flex to get a quick glance at daily progress. It’s an 1.5-inch OLED display similar to the one used on the Fitbit One albeit much smaller. The bright white text on black display is bright and sharp making it easy to see on the move at day or night. It also supports tap gestures while the physical button beside it lets you skip through the time, step count, distance covered, elevation and view any alarms you’ve set up.

Those metrics are recorded using a 3-axis accelerometer alongside an altimeter to track the elevation. Sleep monitoring is also supported and for the first time, it’s done automatically. There’s no need to physically press a button to store snore data. Like the Misfit Flash, it’s based on movement or the lack of it to calculate when you are asleep and wake up in the morning. You still have the ability to set up silent alarms that send out quite a vigourous shake especially in comparison to the Jawbone UP24’s silent alarm setup.

In an attempt to cash in on the steady rise of the smartwatch, the Charge also manages to cram in vibrating alerts when you receive phone calls. It’s pretty limited and we were underwhelmed to the point where we would have peferred Fitbit left this functionality out and concentrated on the tracking-focused features. 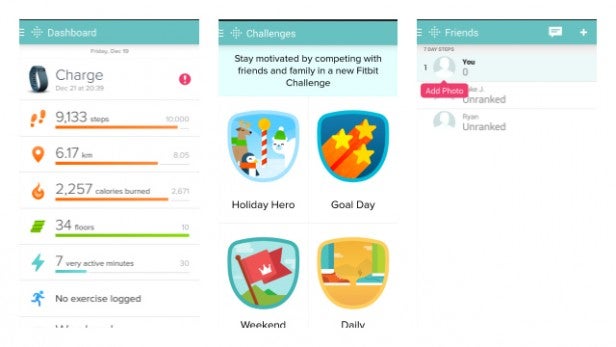 While we are happy to see Fitbit add a screen to its latest tracker and the ability to store 30 days of daily totals and 7 days of motion data, it’s the Fitbit app where you’ll really get a better view of progress and tap into some of the more social elements of the Fitbit ecosystem.

The free phone app now covers all leading operating systems including Windows Phone and syncs with the Charge using Bluetooth 4.0. Having tested it with the iPhone 5 and Samsung Galaxy S5, layout and design is largely consistent across platforms as well. You still have the desktop app option as well for Mac and PCs users, though it still requires plugging in the included USB dongle to sync daily data.

The user interface hasn’t dramatically altered since last encountering it with the Flex. You still have the main dashboard where you can view data with additional information on active minutes or manually log meals and water intake. Each of these sections expand to display progress in bright graphs and give a clearer indication if you are really making improvements.

Settings can be accessed in different places on the Android and iOS apps but crucially give you the same degree of hardware customization and access to set up Fitbit Challenges and find Fitbit friends. 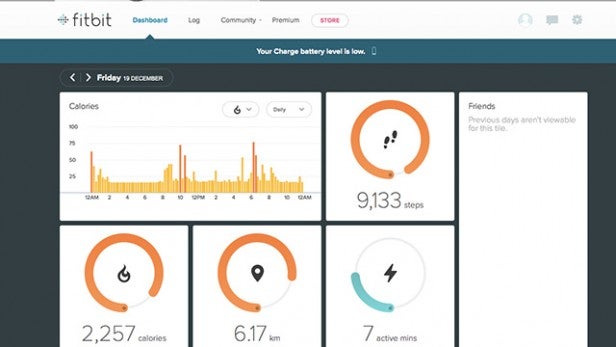 Challenges is one of the most interesting aspects of the app. Here you can set new challenges against teammates or family members to see who can hit their personal step goal over a day or a weekend. This is clearly aimed at the more casual users in a bid to gamify the experience and makes it easy to invite other users to join. Those daily goals can be set up in the account section and it’s not just about steps. You can adjust distance, calories burned, active minutes, floor climbed and even diet goals.

Third party app support is a big play for Fitbit and is really what sets it apart from other trackers. This means you can feed data from the likes of Endomondo, MyFitnessPal and LoseIt! for more accurate data recording and to make up for some of the hardware shortcomings like the lack of GPS. It also means you have alternative ways to log food data although Fitbit does not offer a pretty comprehensive solution within its own application.

Head into the desktop app and there’s more of the same. This lives inside the Fitbit website and gives a more visual breakdown of your data. You can still manually log data but there’s additional fields like glucose, blood pressure and heart rate. It’s also the place where you can tap into the community, a key way to stay motivated and share tips and plans with other Fitbit users.

It’s a pretty comprehensive showing but if you want more there is a premium paid-for version, to get more indepth reports for food, activity and sleep. There’s even a trainer option that helps you make changes based on your data. 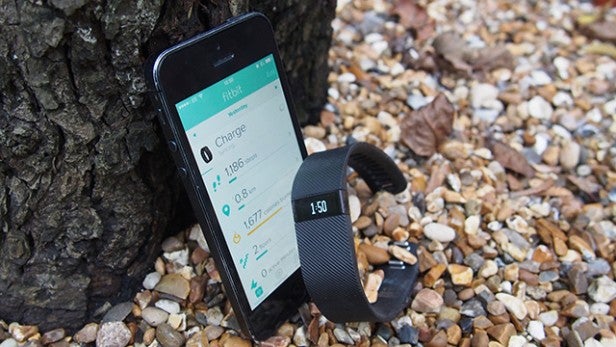 What is important to remember with the Fitbit Charge and most other trackers is that it takes time to really get an idea of how well it does its job of helping you make healthy changes. There’s also going to be some inevitable discrepancies with the kind of data recorded from wrist worn trackers. We don’t have problem from some of the accuracy of the data the Charge serves up but what it really lacks is a strong motivational push to stay on top of your goals.

Testing it for distance tracked and step count against the Jawbone UP24 the Fitbit matches well with the rival tracker and only shows some minor differences when we had to take the UP24 off to pevent it from getting wet. When it comes to taking it out for a run there’s no automatic activity tracking but there’s a stopwatch feature to separate the more intense sections of your day. The best option here is to use an existing fitness app with GPS support to get more accurate readings and avoid manually logging exercise. 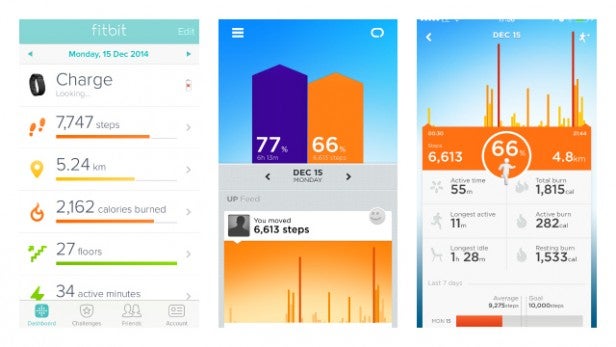 The automatic sleep tracking is a great addition and compared to the Jawbone UP24, where you need to manually set up sleep tracking, there are some differences in the data.  The Jawbone UP24 offers more of a breakdown of your sleep while the Fitbit app simply distinguishes between restless and awake time. Automatic sleep tracking does pose one potential problem. There is the possibility it can mistakenly track inactivity for long periods for sleep though this data can be manually removed within the app. 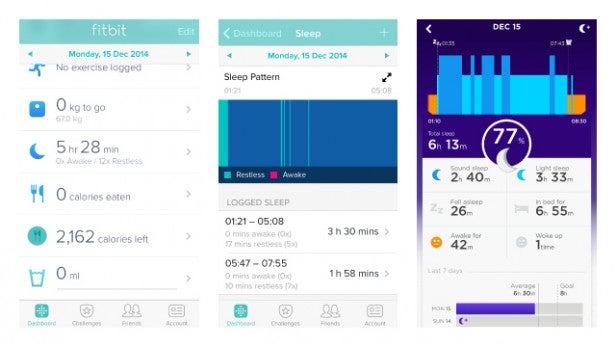 Left to right: The Fitbit Charge’s automatic sleep tracking means there some differences in recordings in comparison to the Jawbone UP24

Outside of the motion and sleep tracking, it’s up to you to keep on top of everything else that contributes to living a much healthier lifestyle. Fitbit does a much better than most relying a lot less on third party apps than other platforms. Food tracking still feels a bit of a chore even with the improvements Fitbit has made to this section of the software.

On the battery front, its nice to some improvements even if its not as radical as offering the same six months as the Fitbit Zip. Fitbit’s trackers have historically performed better than the claimed battery life, at least by a few extra days. The Charge promises 7 to 10 days and wearing it continuously using the stopwatch features and regularly checking progress it’s definitely nearer the latter. Disabling alarms and reducing interaction with the display will certainly help preserve the battery life. 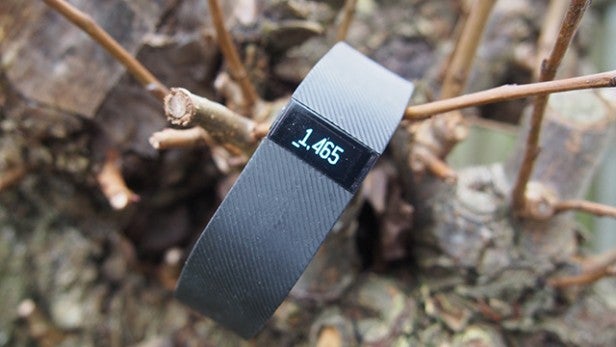 Should I buy the Fitbit Charge?

Having made us wait for the Fitbit Charge after the problems with the Force, we can’t help feeling a little underwhelmed having now spent some time with it. It’s a solid all-round performer with a strong ecosystem behind it and certainly addresses most of our main gripes with the Flex. However, it’s the arrival of the Fitbit Charge HR in early 2015 that makes the Charge a little redundant.

If you own a Fitbit Flex and thinking of upgrading to the Charge, you will see the instant benefits of having a screen to look a lot more than the disappointing smartwatch features. If you can hold on and can afford to spend a little extra, then the Charge HR looks the better option.

The Fitbit Charge is a solid, if not groundbreaking successor to the Flex that should stick to health and fitness and leave the smartwatch features to the smartwatches.