What is the Fitbit Alta?

The Alta is Fitbit’s best-looking fitness band yet, but it doesn’t really redefine the whole category. If you already have a Fitbit Charge, Jawbone UP2 or even a smartwatch such as the Moto 360 Sport, there isn’t a whole lot here that will get you to switch.

However, the Alta is a fine first fitness band, one that you won’t mind wearing out and about. It offers decent battery life, can cleverly detect when you’re out for a run or just walking to the shops, and links with a basic mobile app.

Simply put, it does the job. Fitbit knows how to build a fitness band, and it’s once again achieved that here.

Fitness trackers kicked off the wearable revolution a few years ago. The band we strapped to our wrists to track our daily steps and calories was an easy entrance into the wearable world.

And to be honest, the basic design hasn’t changed all that much. The Fitbit Alta is you’d expect a typical fitness tracker to look; it wraps around your wrist with a rubberised strap that can be unclipped thanks to a clever release mechanism.

Connecting the two parts of the strap together is a 1.4-inch, 128 x 36 pixel OLED display. While it isn’t the first Fitbit fitness band to sport a screen, it’s certainly nicer and easier to read than the Fitbit Charge. 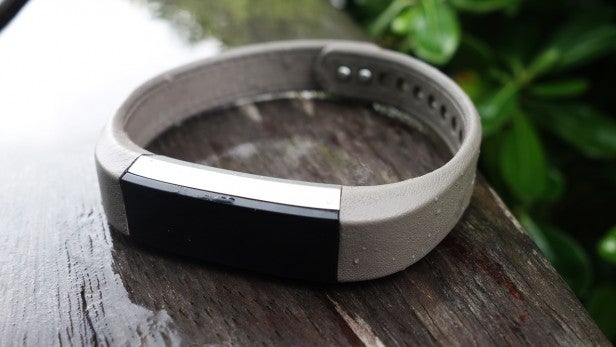 The removable band adds a hit more customisability to the device. Although previous Fitbit devices have been available in various hues, the ability to switch out the straps will enable you to dress up your band with a few different looks.

The basic model, which retails for £99.99, comes with a “Classic” band. It’s rubbery, sporty and just a little comfier than previous models. I was always prone to getting a rash on wearing a Flex or Charge, but this one doesn’t have the same effect. It isn’t quite as nice as Apple’s Sport band, but it’s an improvement nonetheless.

I’ve also been using another band, a genuine leather option called Luxe, which has a soft-touch finish. At £49.99 – half the price of the overall band – I’d say that it’s probably overpriced, but it’s definitely more comfortable.

For the more stylish still, a Luxe stainless steel option is available too. It’s pricier at £79.99, but would suit if you prefer a metal watch style. 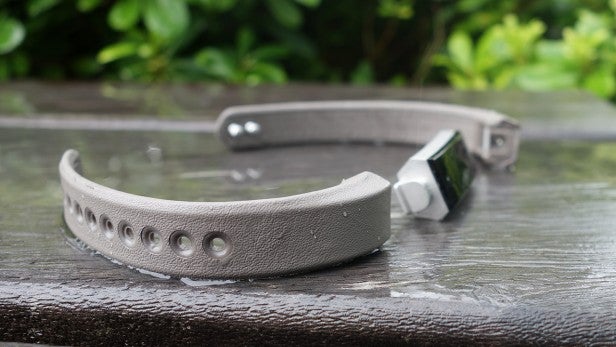 Considering it was the biggest downfall of the Jawbone UP2, one of the strongest rivals to the Alta, Fitbit has done a superb job on the clasp here. Instead of hanging on by a thread, it’s stuck firmly in place with the help of a selection of sturdy pins. In all my time wearing the Alta, I never once felt like it was going to fall off.

The Alta is one of the most comfortable fitness bands I’ve ever worn. It’s also one the most aesthetically pleasing. It doesn’t protrude too far off my wrist and is light enough in weight to be barely noticeable. While it’s unlikely that it will be mistaken for a nice piece of jewellery, it’s in no way an eyesore.

Considering Fitbit is touting this as a device you’ll want to wear all the time then, it’s a shame the Alta isn’t actually waterproof. It’s fine for wearing while washing up or getting caught in the rain, but you’ll have to take it off before you get in the shower. And don’t even think about taking it in the pool. 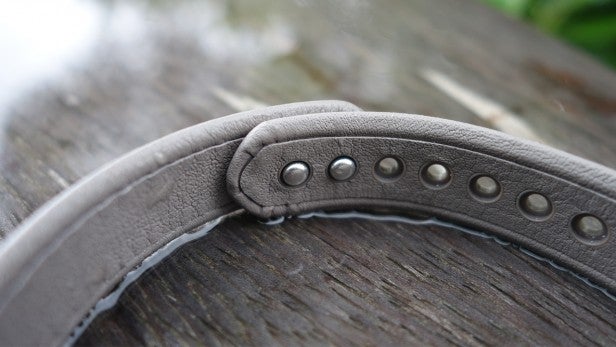 What impresses most about the Alta is its simplicity. Fitness bands are far from a vital tool anymore, especially since the majority of phones nowadays have the capability for basic tracking. However, it’s a pleasure using Fitbit’s latest wearable to monitor my daily movements.

Like any good fitness tracker, the Alta will keep an eye on your steps, distance, time you’re out and about, and how many calories you’ve burned off. However, it has a couple of neat tricks that raise its tracking status above that of a phone.

Fitbit’s SmartTrack tech automatically kicks into gear when it senses a sudden change in your movement, turning on the workout mode. Each time I’ve been out for a run with the Alta, it has automatically detected that I’m doing so and has switched modes as a result. Considering I used to often forget to manually switch modes on older bands, it’s good to see that they’ve become smarter.

Automatic sleep tracking is included too – which works surprisingly well – and is another must-have in a band such as this. I’m also a huge fan of the nudges it gives me to stand up and walk around. They’re annoying, but they do the job. 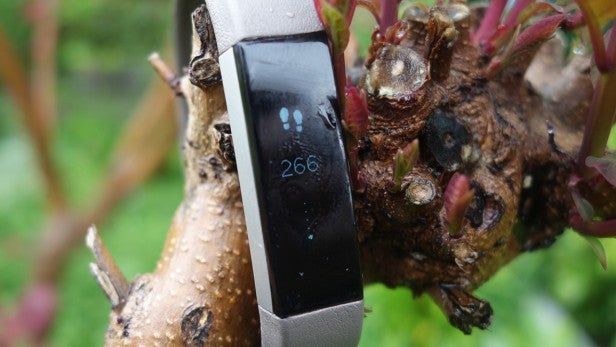 The Alta is still very much a basic fitness band, however. There’s no GPS – making it a no-go for those looking to seriously track their runs – and no heart-rate monitor either. GPS was never going to make the cut, to be honest, but a heart-rate monitor would have made this a more enticing product. It isn’t a vital feature, but since an increasing number of workouts now request that you check your heart rate before and after your session, it simply means you’ll need another device to do this.

A quick but firm – since it isn’t the most responsive – tap on the screen will bring up your current step count, and then a swipe will reveal the calories burned and distance travelled. Raising the Alta towards your face serves to turn on the screen and display the time. It’s easy to read, even in sunny conditions, but it remains on only momentarily – it’s far from a watch replacement.

It’s also possible to receive alerts from your phone on the Alta’s OLED display, but what you get is limited. Texts and phone calls come through – although messages seem to come in a good hit later than they do on my phone – but you’ll get nothing from WhatsApp, Gmail or any other apps. That’s a shame, especially since I rarely use typical SMS messaging, so I turned the feature off altogether.

What’s important, however, is that the Alta is an accurate fitness tracker.

To test the accuracy of a fitness band, I normally see how closely it matches the steps tracked by a Misfit Shine and Fitbit Charge, as well as my iPhone SE – phones are notably accurate for step-tracking, since they’re often kept in a pocket near your hip and you normally always have it with you. The good news is that the Alta manages to keep up. 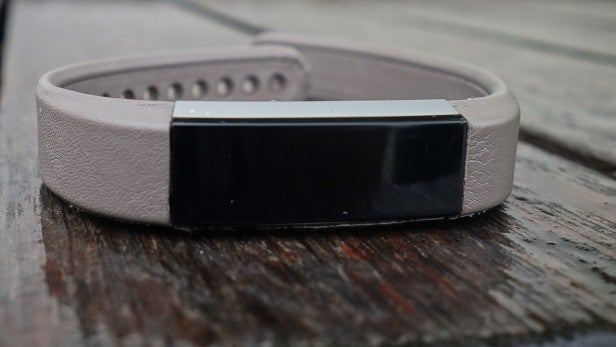 It’s also superb at detecting that I’ve started running and switches modes accordingly, clearly marking this on the app.

Sleep tracking appears to be accurate most of the time. During the two weeks I tested the Alta, it threw up some odd readings only on two occasions. One night, I apparently woke up and stayed up for three hours (this didn’t happen), and on another I rose at 5.00am (this certainly didn’t happen). Apart from those two cases, the Alta matched the Jawbone UP24 I was also wearing.

Fitbit’s app is an important part of the package here, and for the most part it works as advertised. 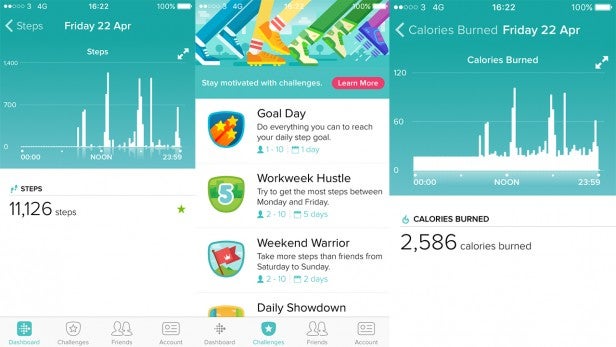 If you’ve ever used a Fitbit device before, you’ll feel instantly at home. It’s easy to view your current goals and achievements thanks to a colour-changing bar that fills up as you burn more calories or take more steps, while the leaderboards and badges add a competitive element to your training.

I did experience a few issues on initial setup – the app just wouldn’t recognise the device I was trying to pair – but it worked eventually, and since then syncing has been fine. It’s not the quickest at pulling in your data, but it gets there in the end. 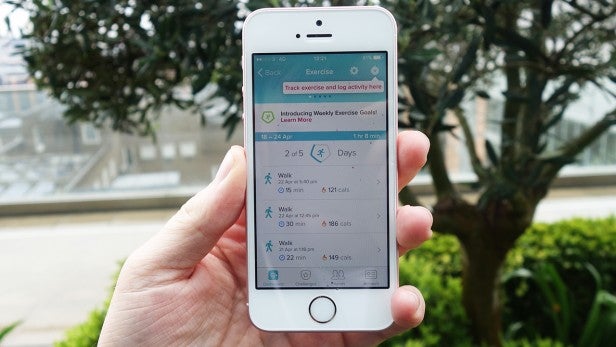 Considering it has to power a display, I was fairly impressed with the battery life of the Alta. After an initial hour-long charge, the device went for five days without it requiring to juice up. The second time around, this improved to seven days.

These results follow plenty of syncing to the mobile apps, frequently checking the time, using the auto-workout mode and wearing it overnight – and with the phone notification mode on, too. This is notable; your typical smartwatch would need a recharge every day.

Obviously, you’re not going to get as much juice out of it as a Withings Go or Misfit Shine, since both use traditional watch batteries. The Alta’s battery life results are also slightly shorter than that of the Jawbone lineup, but these devices don’t have a display. 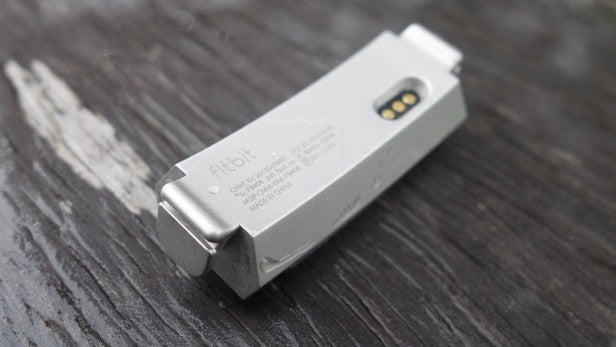 In my eyes, a week of battery life is perfectly adequate and it makes the Alta a great travelling buddy.

My only annoyance is the pesky proprietary charger that clamps over the back of the display. It’s different to all previous Fitbit chargers, and frankly, it’s far from an elegant solution. It takes a couple of attempts to get it into place, making it virtually impossible in the dark.

Should you buy the Fitbit Alta?

The Fitbit Alta is a decent, if fairly uninteresting, fitness band. It’s simple to use, accurate and looks good, but it doesn’t do anything differently to any of the devices that went before it.

If you’re serious about tracking your stats, you’ll want a device that’s far more feature-packed than the Alta. Take a look at the Microsoft Band 2, or Basis Peak. The Alta also isn’t a replacement for a smartwatch, mainly because the implementation of notifications is severely limited.

Those who aren’t fussed about having a display at all, but would like something cheaper, should consider the Withings Go.

A basic fitness tracker that looks good, but doesn’t really do much to stand out