Firewall: Zero Hour - PlayStation VR
in stock
$22.99
View
Powered by Trusted Reviews
Firewall: Zero Hour is so close to being the first definitive VR FPS (though you might argue that Farpoint has been heading in the right direction since its launch). It’s smart, picking its battles carefully and winning most of them, and the team at First Contact Entertainment has nailed most things in terms of movement, comfort and what you might call ‘gunfeel.’ And anything that is wrong with the game can be fixed with just a little time and a few patches and additions. If you’ve got the gear and the inclination to play it, I’d urge you to do so despite the slightly underwhelming score I’m going to slap it with.

What First Contact Entertainment has done is build a VR game in the vein of Rainbow Six: Siege or Counter Strike. Each mission focuses around a laptop and a pair of firewall switches with one team of attackers attempting to turn off one firewall switch and steal the data from the laptop, while the defenders do their best to stop them. If the defenders can hold off the attackers for a few minutes – or wipe them all out – their team wins. If the attackers can steal the data or kill all defenders, victory is theirs.

Ignore the VR aspect for a second and you have a tight, methodical, highly tactical team-based shooter, well-executed if a little basic. In VR, however, it’s incredibly tense and immersive. You’re constantly shifting gaze left and right, up and down, behind you to keep checking that nobody’s sneaking up on you and nobody is drawing aim on you from a corner you’re not quite aware of.

The cat and mouse stuff is off the scale. If you’re playing defence, you’re listening out for footsteps and trying to work out where the best vantage point is to surprise attackers – or hustling towards the sound of gunfire and the glowing profiles of your team-mates across the map. The sense of almost physical presence is fantastic.

It helps that the controls and overall experience are pretty much spot on. Firewall: Zero Hour is built around the PSVR Aim controller, using the front stick to move and the right stick to rotate view, though you look around by moving your head and aim through the sights of your virtual gun. You can switch between smooth rotation and a stepped rotation mode for comfort, while subtle vignette effects help to keep nausea at bay.

The tracking’s very accurate, too, though some players have noted that you need to hold the AIM oddly close to your chest. Me? Maybe it’s the lighting in my room, but I’ve found I’ve had to hold it a little too far away, which makes my arms ache after an hour or so of play. 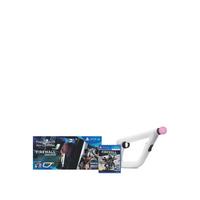 Playing with the PlayStation AIM controller is the best way to enjoy Firewall: Zero Hour. Shop through Very.co.uk and you can save £5 when compared with most other retailers.

You can play it with the DualShock 4 controller, but this is a bit of an awkward, second-class experience. Aim seems accurate enough but the disconnect between how you hold the controller and how you appear to be holding the gun feels weird. You really should have the right peripheral for this one.

The visuals aren’t amazing – think last-generation Call of Duty – and the environments are a bit on the generic side, but there’s enough detail to convince you that you’re in a slick mansion, dockyard or luxury hotel. The levels are cleverly designed to give you multiple routes to move through or defend, plus nasty spots where one player can work their way around another and hit them from above or behind. Map knowledge plays a key part in victory or defeat, and there are already some clever psychological games going on with doors.

You also have a choice of operators, each one with a different build and a signature perk, like faster healing, faster reloads or silent movement at slow speeds. You also have three weapon loadout options, plus custom loadouts and custom scopes, silencers, etc, once you’ve worked your way through the first few ranks. Keep levelling up and secondary skills and cosmetics can be yours.

Now, beyond the tutorial there’s not a whole lot of single-player content in Firewall: Zero Hour. You can train through the different missions fighting a respawning army of bots, which is surprisingly satisfying for an hour or so, but that’s about it. This is fundamentally a multiplayer game.

This doesn’t mean that co-op is the focus, either, which actually seems a bit of a missed opportunity. You can play through the same training missions with up to four players, and the combination of camaraderie, shared tactics, narrow wins and the odd messy defeat actually makes for a really fun experience, where you almost feel like you and your team-mates are playing in the same space. It’s a good way to get used to chatting in VR – communication is pretty crucial – and the need to cover each others’ backs and get downed allies back on their feet works brilliantly. In fact, you will wish First Contact had made more of it.

The studio’s priority was clearly the competitive play, and be warned: it’s hardcore stuff. The two teams usually make contact quickly and there are no respawns; go down, bleed out in ninety seconds and you’re spectating (and you can forget about those ninety seconds if you’re shot again while down). First Contact has followed a fairly punishing model when it comes to damage, and a few shots – or one from some weapons – is enough to put you out for the count.

On the one hand, this is kind of what we wanted: a tough, immersive team shooter where you really need to work together to survive. Fast reflexes and good situational awareness are must-haves, and I wouldn’t want to change the way Firewall: Zero Hour ratchets up the tension, leaving you in a state of high alert (and heart-pounding suspense) throughout each match.

Matches are short but incredibly intense, and Firewall is the kind of game that builds up stories, as two of you hole up in an alleyway or on a fire escape, trying to hold the other team down with suppression fire, or as you breach a room, hurl in the smoke grenades and try to blast the two guys blocking access to the laptop. You feel that each and every kill – and even each revive – counts.

On the other hand, it can be tough going. It’s not always easy to spot someone sneaking up behind you, and two or even three of you can be wiped out in a flash. In some games your first indication of contact is the bullet that puts you on the ground. I’m not complaining; this is standard stuff for a real shooter, and the obvious answer is to put more hours in, work harder on the teamwork and stop making rookie errors – though I’ve discovered that being screamed at for making rookie errors by an obnoxious guy across the Atlantic is even worse in VR than in a regular game. To be fair, this seems the exception rather than the rule. The community as a whole has been great so far.

Still, what makes this a problem is that each match is just a single, short-lived round, after which you’re back to the lobby screen. If anyone then leaves, on either team, you’re then standing around waiting for another player to arrive. Being that the potential player base for Firewall narrows down on PSVR owners who have an Aim controller and want to play a hardcore shooter, the numbers right now don’t seem particularly high, so the wait can be uncomfortably long. Things seem slightly better with a patch that arrived soon after launch, but you can still spend significant amounts of time hanging around for the next match.

My hope is that the player numbers stabilise, that First Contact shifts to a three-round setup and that the co-op game gets a little more attention, because then Firewall would be my go-to VR game. Right now, though, it’s merely one of the best options, thrilling while you’re up and playing, mildly frustrating when you’re not.

Firewall can be an incredible experience – and easily the most exciting and immersive VR shooter that I’ve played. It’s just a shame that there’s not more co-op and single-player action, more competitive modes or shorter waits between the game’s bite-sized matches. The core action is more than strong enough that anyone with a PSVR headset and Aim controller should buy in, but don’t go in expecting perfection – it’s good, but not there yet.