The Finlux 65F8200-T is yet another in what’s starting to feel like an endless stream of 65-inch TVs. However, this one differs from the rest in one rather crucial way: it costs the astonishingly low sum of £1,200. So, we guess we’d better get started on what will surely end up being a hunt for compromises… 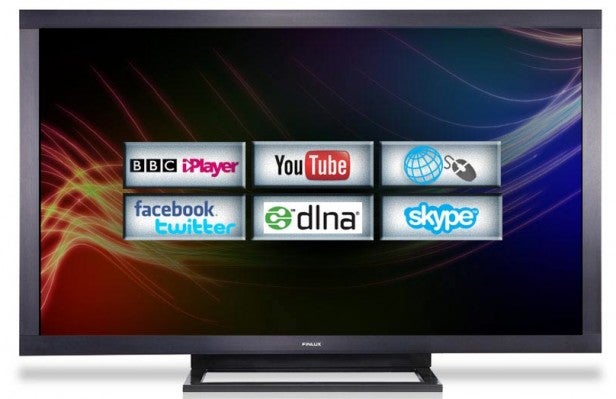 If you could judge the quality of a TV by its weight then the Finlux 65F8200-T would be the finest TV in the world. Our backs are still aching from hoiking this monster out of its crumbling box, and we find Finlux’s online description of it as ‘Easily Wall Mountable’ painfully inaccurate. Certainly you’ll not be wanting to hang the Finlux 65F8200-T onto a typical sheet of plasterboard…

The reasons for the heft are fairly straightforward. First, its bezel extends to a seriously wide two inches or more around all four sides of the screen. Second, its rear sticks out more than most. And third, it’s made, surprisingly, out of serious, cold-to-the-touch, digs-into-your-fingers metal.

Normally we’d be all in favour of such robust build quality, but here it contributes to a rather industrial aesthetic that feels more like an escapee from a science lab kit rack than something designed for your living room.

Still, looks are pretty low down our list of priorities when talking about a budget TV. So let’s move swiftly on to more critical stuff, starting with its connections.

Here the set proves unexpectedly promising. For starters it’s got four HDMIs when we’ve seen some much more expensive TVs this year only mustering three. Also, even more surprisingly, it’s got a LAN port and ships with a Wi-Fi USB dongle for attaching the TV to your network.

These networking options can both stream multimedia files from DLNA-capable PCs, or take the 65F8200-T online with Finlux’s Smart TV platform. Further multimedia options are supplied by two USB ports, which can be used to input multimedia files or timeshift to USB HDDs from the TV’s built-in Freeview HD tuner.

You can even use the USBs for attaching one of Finlux’s optional extra (£80) HD Skype camera/mic combis, which enable you to take advantage of the Skype app that forms part of Finlux’s latest Smart TV platform. 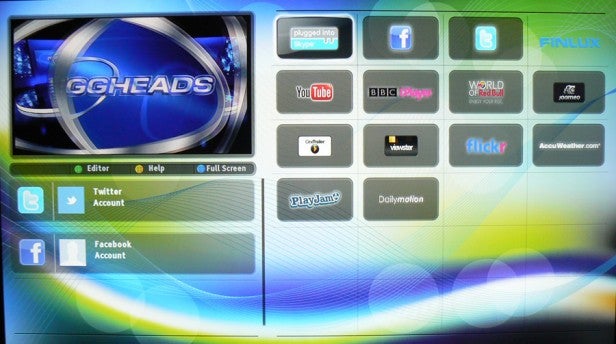 Other apps on this smart platform comprise Facebook, Twitter, YouTube, the BBC iPlayer, World of Red Bull, Joomeo, CineTrailer, Viewster, Flickr, AccuWeather.com, PlayJam, and DailyMotion. This clearly isn’t the world’s biggest roster of services, but to be fair there are some much more expensive TVs from considerably ‘bigger’ brands that don’t offer significantly more online content than this uber-cheap Finlux. And anyway, having any smart TV features at all on a £1,200 65-inch TV could reasonably be considered a bonus rather than a right.

Turning to the Finlux 65F8200-T’s screen specification, it uses an edge LED illumination system with no local dimming to help boost contrast. It’s also just a 50Hz TV, with no serious motion processing to tackle LCD TV’s typical problems with motion blur. But while its fairly basic level of spec clearly raises concerns about the 65F8200-T’s likely picture quality, it’s really no more than you should expect for £1200.

The Finlux 65F8200-T has more picture calibration tools at its disposal than you might expect. There are five themed picture presets for a start: Dynamic, Cinema, Game, Natural and Sports; you can adjust the backlight (including choosing a fairly handy Auto mode); call in a noise reduction system; adjust the level of dynamic contrast the TV applies; adjust the gain of the RGB colour elements; tweak skin tones without impacting the rest of the colour palette, and shift the picture’s red/green balance courtesy of a simple sliding bar. 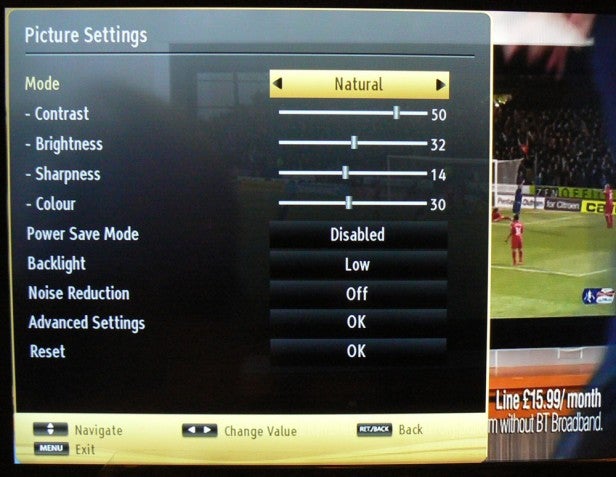 You don’t get a full colour management system, but it’s not realistic to expect one at the this level of the TV market.

As ever, we don’t like to dictate to people how they should set their pictures up. But there are a couple of points we want to raise just to help you avoid some of the screen’s weaknesses. One would be to use the dynamic contrast system to boost black level, but only on its Low setting to stop the image becoming too unstable.

We’d personally also not use the noise reduction system, even with standard def sources, as this can soften and blur pictures far too much for comfort.

The last suggestions we’d make are that you don’t use the over-aggressive ‘Dynamic’ picture reset, and that which ever preset you do use, you reduce the contrast setting to no higher than 50, as this actually proves more useful in reducing visible noise than the NR circuitry.