Finlux. Finlux. Finlux… Hmm. Nope, the name’s familiar, but having scanned both our addled brains and our files of past reviews, it would appear that no previous Finlux product has found its way into our reviews database. Despite the brand having being in and out of the UK market on a number of occasions since the brand name was first properly used in 1971. And yet here we have the 55in Finlux 55S6040-M.

Owned by Turkish AV outfit Vestel since 2009, Finlux is now back in business in the UK, with its own direct-sales website (www.finluxdirect.com) and even a quirky new TV advertising campaign featuring an eccentric but happy Finnish man. In his pants.

Predictably enough, Finlux has chosen to set out its UK stall based predominantly on price. For instance, the Finlux 55S6040-M we’re looking at today delivers its 55in of LED-lit pictures for the very reasonable sum of £848.99. But actually, the very fact that this is a 55in TV suggests that maybe Finlux is wanting to become a more ‘serious’ player than it has previously; certainly a set of such size can’t be considered a ‘casual’ purchase in any way, regardless of how affordable it might be relative to most other 55in TVs in town. 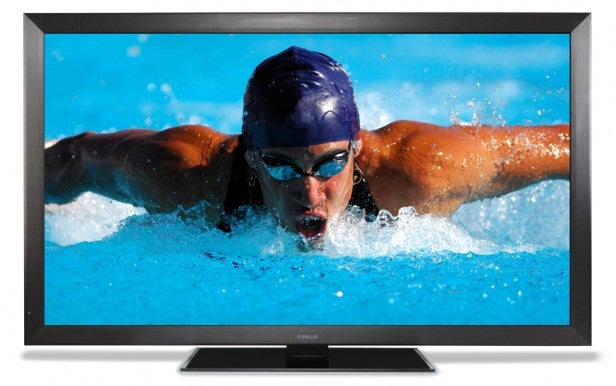 The Finlux 55S6040-M’s design makes it impossible to treat casually, too. Surrounding the already-huge screen is a pretty hefty amount of bezel – not far off two inches of glossy blackness frames each of the TV’s four edges. This fact, coupled with the entirely rectangular, flourish-free nature of the set’s sculpting, means that the TV ultimately looks like the budget set it is. But at least it’s pretty well built.

It’s better connected – in some ways – than we might have expected too. For instance, there are four HDMIs when two or three would have been acceptable for the set’s money, and there are two USBs when we might frankly have anticipated none. Even better, these USBs can record video to USB HDDs from the TV’s Freeview tuner, and play video, photo and music files. Supported formats including MPEG 1 & 2, H.264 (in an MKV container), .avi files, .mp4 files (including Xvid), MP3s, JPEGs, and .bmp files.

You might have noticed that we only said “Freeview” tuner earlier, not Freeview HD, and this was no slip of the keyboard. The lack of HD tuner will immediately make the TV a non-starter for anyone who wants to be able to feed their large TV an HD signal but doesn’t want to have to pay a subscription to the likes of Sky or Virgin. 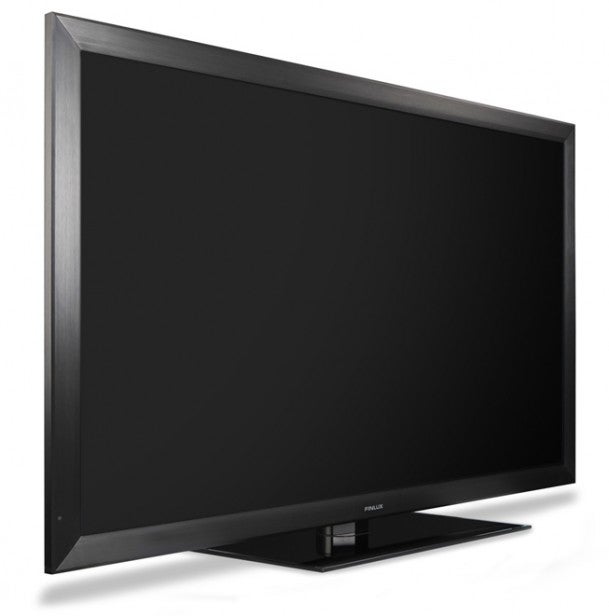 If you do need an HD tuner, you’ll need to look at the Finlux 55S6040-M’s sister model, the 55S6040-T, which adds a Freeview HD tuner for an extra £120. But here lies the clue as to why we believe the 55S6040-M’s lack of HD tuner might not be the disaster it would likely be with a more expensive, mainstream set.

For when you’re talking about a TV as large as 55in, we can definitely imagine an audience of fairly serious AV fans with Sky or Virgin boxes – or just looking for a respectable Blu-ray movie monitor – who just want to maximise the screen size they can on a tight budget. And for these people, saving £120 for a tuner they don’t need makes all kinds of big-screen sense.

It also must be added that as well as lacking a Freeview HD tuner, the Finlux 55S6040-M doesn’t have any DLNA or online functionality. Indeed, it doesn’t even have a LAN port or any sort of Wi-Fi support. But even being able to get PVR and multimedia USB playback from such a cheap TV is more multimedia support than might have been expected.

Using the Finlux 55S6040-M’s surprisingly comfortably-shaped remote to explore the set’s onscreen menus, meanwhile, proves a predictably short-lived experience. The onscreen menus themselves are very basic in presentation. They deign to take an icon-based approach, but the quality of the graphics involved is frankly almost ZX Spectrum-like compared with the HD menu glories now appearing on more expensive TVs.

There’s also not much to delve into within these dated-looking menus. For instance, the electronic programme guide for the digital tuner is drably presented and loses points for retaining neither the picture or even the sound of the channel you were watching when you hit the EPG button.

The basic picture adjustments, moreover, don’t include a backlight tweaker – just a brightness one. There’s no colour management system worthy of the name either, with really the only significant picture tools being an HDMI True Black option and something called ‘Movie Sense’.

The former of these proves very helpful in boosting the black level response of incoming HDMI images, while the latter is the name Finlux gives to its 100Hz processing. It’s nice to see that unlike the recently reviewed Kogan LED55, the Finlux 55S6040-M allows you to turn the 100Hz processing off if you’re not happy with what it brings to the picture.

Actually, though, the 55S6040-M’s 100Hz system is nothing like as poor as that of the Kogan. So much so that you might actually want to leave it on for at least some of the time. It certainly delivers a slight boost in motion clarity while only suffering sporadically with typical artefacts like haloing around moving objects or motion flicker.

Also surprisingly good – so long as you don’t scrutinise it too deeply, at any rate – is the Finlux 55S6040-M’s black level response. There’s not the general wash of greyness over dark scenes that you tend to get with budget panels – especially if you turn on the set’s HDMI True Black option.

Making the 55in TV’s decent black level response more impressive is the pleasingly punchy look to pictures, which are and richly coloured when a shot contains a mix of light and dark material.

Then there’s the sharpness of the set’s HD pictures. Details are presented surprisingly effectively, giving HD images that sense of snap and clarity we’re always looking for on screens as large as that of the Finlux 55S6040-M. Not surprisingly, there are ‘premium’ 55in TVs from the likes of Samsung and Panasonic that can make HD look more detailed still, but for its money, the 55S6040-M’s HD efforts are much more than satisfactory.

For all this positivity, though, you can’t have failed to notice that the Finlux 55S6040-M 55in TV bags an overall score of 7 from us rather than sneaking into potential Trusted Reviews Recommended 8 out of 10 territory. So let’s get into the set’s less impressive aspects.

Easily the most problematic is its susceptibility to that old edge LED bugbear of backlight inconsistency. For even with the set’s brightness level set lower than felt entirely comfortable, we could still clearly see during dark scenes patches of the picture that looked brighter than the rest. And these don’t just show up in the corners either – there are three or four patches scattered around the main part of the image, and when they crop up, they inevitably come between you and what you’re trying to watch. 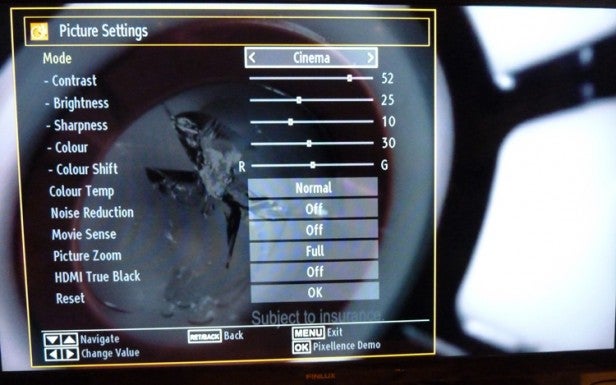 Another problem for the Finlux 55S6040-M is that it’s upscaling of standard definition pictures is not particularly brilliant. Many sources from the Freeview tuner look rather soft and slightly noisy once they’ve been ‘mapped’ onto the 55S6040-M’s Full HD pixel count.

Smaller issues find some patches of very fine detail, such as the weave in some suits, shimmering slightly. And while colours are certainly punchy, they aren’t presented with a great deal of tonal subtlety or range, and at times look just slightly orangey, without there being enough colour adjustment tools to calibrate this flaw away.

Next, while black levels are impressively deep, this depth is only achieved at the expense of quite a bit of shadow detail, especially if you use the HDMI True Black option. The start of Chapter 12 of the final Harry Potter film, for instance, showing Voldemort’s army on a night-time hilltop, appears as a few bits of muted grey surrounded by more or less empty blackness, rather than the actually quite detailed and deep shot it should be.

There’s a problem keen video gamers should be aware of, too. Our input lag measurements for the Finlux 55S6040-M recorded figures of between 75 and 100ms, even with the noise reduction and motion processing off, and using Finlux’s own game preset. These figures are unusually high, and certainly won’t do your performance any favours when playing reaction-based games like Call of Duty online. 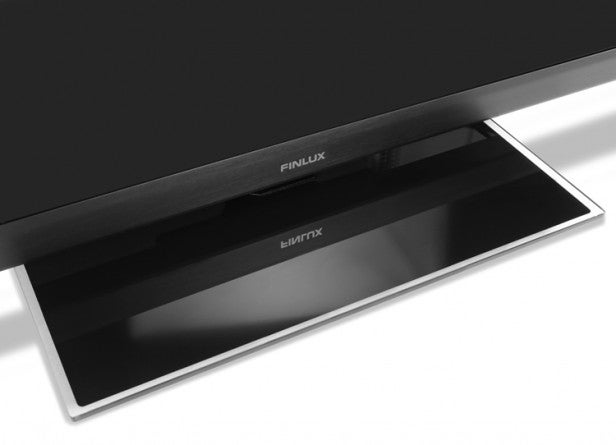 Finally in the negative column, the 55S6040-M’s audio is nothing to write home about. It handles straightforward dialogue well enough, and has a reasonable amount of volume to its name, but bass is in seriously short supply, and the mid-range isn’t open or expansive enough to avoid sounding crowded and harsh when the audio going gets tough.

If you consider the Finlux 55S6040-M strictly in the context of the sort of big-screen TVs we tend to see at its aggressive price, it’s actually quite good. Certainly it doesn’t fall prey to the heinous shortage of black level and motion clarity that so routinely ruins cheap TVs from second and third-tier brands.

Compared with the quality available from much more expensive 55in TVs, though, its flaws become numerous and obvious. So we guess it boils down to a classic case of how comfortably you are able to live with its shortcomings in return for getting such a large and often very decent screen for so little money.