The 55P9076-T is a fairly ambitious TV by Finlux’s usually price-centric standards. For its large 55-inch screen is joined by smart features, 3D playback and, at the time of writing, a free Finlux 7-inch tablet thrown in for free!

Mind you, its price tag of £850 actually puts it up in the same price territory as mid-range big-brand models like the Samsung UE55H6400, so there’s much more pressure on the 55F9076-T to perform than there would be on some of the brand’s more overtly ‘budget’ models.

The 55F9076-T doesn’t look or feel like just another of Finlux’s cheap and cheerful TVs. Lifting it into place on our test-bench reveals it to be unusually heavy and sturdy by modern TV standards, while its fascia is given unexpected pizzazz by the application of a shining metallic finish to both the bottom edge and the side trim that runs around the slim, glossy black bezel. 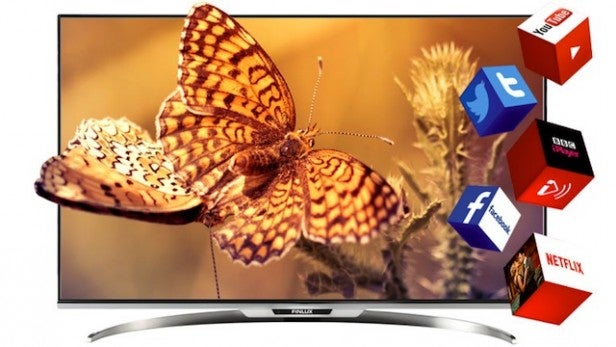 It’s well connected for the most part, too. Its four HDMIs are the equal of any rival set, and its pair of video, photo and music-friendly USBs give it credible multimedia credentials. Though in reality you’ll likely only have one USB to play with, since the other one is needed to add Wi-Fi via a provided USB dongle.

Not having Wi-Fi built into the TV’s main chassis does make us worry about the potential age of the panel at the 55F9076-T’s heart. But the USB dongle works well enough, providing wireless access to multimedia content stored on networked DLNA devices and the apps available on Finlux’s Smart TV online platform.

The content levels on this platform aren’t up there with those you get with most ‘big name’ TVs these days, but neither are they a complete washout. Highlights comprise the BBC iPlayer, Netflix, YouTube, Viewster, Deezer, YouTube, iConcerts, Twitter, Facebook, flickr, and myalbum. Plus there’s a browser for surfing the wider Web.

Obviously a few more services would be nice, but Finlux does seem to be moving slowly in the right direction in this respect.

The screen is a full HD affair illuminated by an edge LED array, and it has a Freeview HD tuner built in. You an record from this tuner to a USB HDD if you so desire, and the set’s passive 3D system is supported by no less than eight pairs of free glasses included with the TV.

The 55F9076-T isn’t as comprehensive with its picture adjustments as many big-brand TVs, but there’s still enough going to satisfy most mainstream users.

Among the most useful tools is the small but effective selection of picture presets, the multi-setting noise reduction system, a dynamic contrast system, a surprisingly effective skin tone tweaker, a rather unsubtle red-to-green colour tone slider, and more useful 0-15 sliders for the gain of the red, green and blue colour elements.

The one pity from a set up point of view is that there isn’t any adjustment for the set’s backlight beyond low, medium, high and Auto settings. We’ve often found getting the best out of LCD TVs dependent on having far more control over the backlight than the 55F9076-T provides.

In terms of the key settings the TV does provide, we started with the Natural preset, and then reduced the contrast to around its 48 value, set the backlight to Auto, and turned off noise reduction for all viewing – even standard definition.

We also nudged the Skin Tone slider up a position or two for film viewing, as this provided a handy shortcut to the sort of warmer colour palettes that look most natural with most movie content.