The 49UT3E310B-T is a 49-inch LCD TV equipped with a native 4K/UHD resolution, Smart TV features, a Freeview HD tuner and 3D playback – all for just £499. What’s more, at the time of writing anyone who buys this set can claim a free Finlux Android tablet that would normally cost £129.99 on its own.

Sounds too good to be true, doesn’t it?

Although the 49UT3E310B-T’s build quality is nothing to write home about, due to heavy dependence on plastic, it’s certainly not an ugly TV. Its frame is engagingly slim and stylishly minimalistic, the injection of some silver trim works well, and you don’t notice the plasticky finish from a typical viewing distance.

Its connections betray little evidence of the 49UT3E310B-T’s remarkable cheapness either. There are four HDMIs for starters, as well as three USBs for playing back multimedia files from USB storage devices or recording to USB HDDs from the built-in Freeview HD tuner. Plus there’s a D-Sub PC port, Wi-Fi and Ethernet connections, and even an output you could use to add a passive subwoofer.

The HDMIs are all v2.0 affairs with HDCP 2.2 to support UHD sources up to 50/60Hz, and the network options support both the streaming of multimedia from DLNA devices and access to Finlux’s online services.

These online services include the 4K versions of Netflix (which even gets a dedicated button on the remote control) and, surprisingly, YouTube – though there’s currently no sign of that other great source of 4K content, Amazon Instant. Also, while you do get BBC iPlayer, you don’t get iTV Player, All 4 or Demand 5 terrestrial catch-up services. 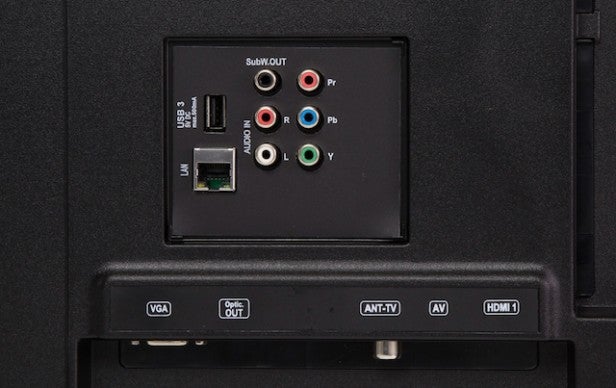 The 49UT3E310B-T’s smart menus are, not surprisingly for such a cheap TV, somewhat basic in their presentation versus the stars of the smart TV world. Also the amount of useful apps they provide access to really is quite limited. The only ones of note beyond those mentioned already are Twitter, Facebook, iConcerts, a web browser, Tunein Radio, Accuweather, BBC News and BBC Sport.

It’s a bit frustrating, too, to find when you head into the app store that Finlux doesn’t work as hard as the big TV brands to weed out many foreign language apps that are of little to no interest in the UK.

Still, let’s not forget we’re talking here about a near-50-inch 4K TV that costs less than £500, so you could reasonably argue that finding any smart features at all is a bonus.

The 49UT3E310B-T also not only supports 3D playback but ships with no less than eight free pairs of glasses. This is impressive in an era where most 3D-capable TVs these days don’t ship with any free glasses at all. 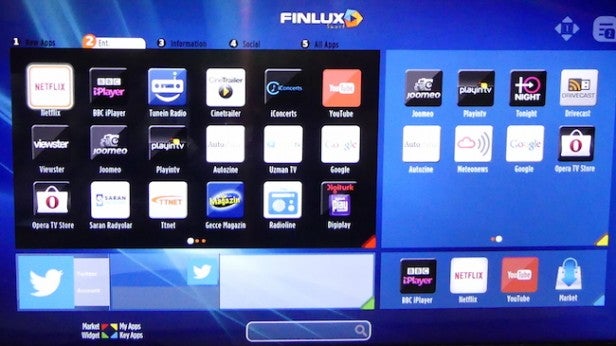 The reason Finlux can include so many free glasses is that it uses the passive 3D system, where a filter on the TV’s screen delivers the 3D effect to cheap, electronics-free glasses.

With HDR (high dynamic range) support unsurprisingly not on its menu, though, the 49UT3E310B-T’s relatively low brightness could turn out to be a blessing rather than a curse, as it may reduce the likelihood of the screen suffering major backlight clouding problems.

As you might expect with such a cheap TV, the 49UT3E310B-T isn’t exactly bulging at the seams with picture setup options. There’s no colour management worthy of the name, no gamma control, and the only serious processing option is a noise reduction routine that’s best left switched off.

Of the tools that are available, I’d suggest taking the Cinema picture preset as your start point, then setting the Energy Saving feature to Custom and tweaking the backlight down to around 40. Also set the Dynamic Contrast mode to Medium, reduce the contrast to around 82, and set the Picture Zoom to Full (to stop the screen rescaling everything, including native 4K content).