Finlux has a mixed reputation when it comes to TV picture quality. But we’re pleased to say that for the most part the 48FT3E242S-T is one of the Vestel-owned brand’s hits.

The key to its success is its respectable black level response by affordable LCD standards. Provided you’ve followed the setup advice given earlier, the 48FT3E242S-T really does have a fair stab at reproducing a credible black colour. Sure, there’s a degree of greyness lingering in the attempted blackness, and the screen does have to remove a considerable amount of light from its images to achieve its respectable blacks. But the fact that so affordable a 48-inch TV can reach such a respectable black depth at all is a boon. 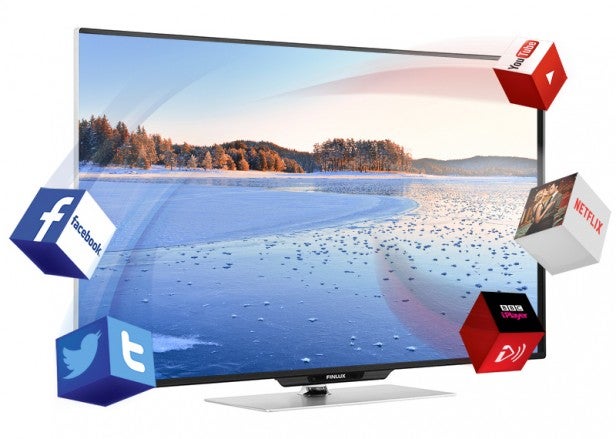 A good black level response often leads to good colour tones generally, and so it proves with the 48FT3E242S-T – especially if you take the time to eke away a little green bias that exists in the set’s default picture presets. Skin tones look surprisingly natural, and there’s plenty of dynamism during bright scenes that doesn’t look forced or crude. Dark colours look less convincing due to the screen’s lack of brightness when trying to render dark scenes, but while the slip in naturalism is noticeable, it’s far from disastrous.

Another surprising strength of the 48FT3E242S-T’s pictures is their sharpness with HD content. Detail and clarity levels with decent quality Blu-rays never leave you in any doubt that you’re watching an HD rather than standard definition source. What’s more, while there is some reduction in clarity over moving objects, the extent of the blurring really isn’t bad for such an affordable LCD TV.

An uninspiring upscaling engine makes the 48FT3E242S-T a pretty average handler of standard definition sources – or standard definition digital broadcasts at least – but it’s really not that hard to avoid standard def these days. Especially when a TV has a Freeview HD tuner like this Finlux does.

Inevitably, given its price, the amount of brightness the screen has to remove from dark scenes isn’t its only weakness. Another is the appearance of some gentle backlight clouding over dark scenes; in fact, it’s the need to reduce the impact of this that prevents you from being able to run the backlight on its High setting. To be fair, the clouding on the 48FT3E242S-T isn’t nearly as aggressive as we’ve seen it on some Finlux TVs, but it can occasionally distract you even when with the backlight set to low.

Another issue connected to the 48FT3E242S-T’s post-calibration lack of brightness is a loss of shadow detail in the picture’s darkest areas. This leaves such areas looking rather hollow and thus out of keeping with the rest of the image.

One final flaw finds colours occasionally suffering with a little banding/striping in areas where you should see smooth blends.

It’s a simple fact, though, that pretty much all mid-sized TVs at the 48FT3E242S-T’s price level will not only also suffer with most of the same problems, but will generally suffer with them significantly more.

Used as the main TV for the review period
Tested for more than a week
Tested using industry calibrated tools, discs and with real world use
Tested with broadcast content (HD/SD), video streams and demo discs
Previous
Finlux 48FT3E242S-T Review Next
3D, Sound and Verdict Review