We’d optimistically hoped that the 32HBD247’s chunky design might help it produce better sound than most budget flat TVs. But it doesn’t really. Action scenes still sound thin and weedy, and voices tend to distort a little even when volume levels haven’t been pushed particularly high. Treble can sound rather harsh and shrill too, a problem not helped by a pretty profound lack of bass to underpin proceedings. 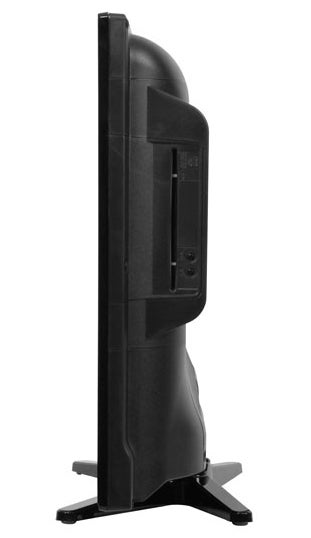 One other significant problem that cropped up quite regularly during our tests was an irritating loss of synchronisation between the video and audio tracks when watching Blu-rays, leading to obvious lip-sync problems.

If you’re intending to double the 32HBD274 up as a gaming monitor you’ll be interested to learn that we measured its input lag – the time it takes to produce images received at its inputs – at 20ms on average. This is a very good result for a TV, and shouldn’t have much negative impact on your gaming abilities at all.

One other point to raise here is the 32HBD274’s operating system. This comprises a series of bland but largely effective, no-nonsense onscreen menus and a remote control that makes use of its prodigious size to provide a spacious layout and large, well-labelled buttons. The positioning of the buttons isn’t especially well thought out, though.

There are undoubtedly far better-performing 32-inch TVs out there if you’re willing to pay for them. The Samsung UE32H5500 springs to mind, along with the Sony 32W705. But as well as neither of these TVs providing you with a built-in DVD player, the Samsung costs £270 and the Sony costs £319. So if you really do only have a shoestring budget to work with, we can’t think of any other sub-£200 32-inch TV to rival this Finlux.

If you only spend £180 on a 32-inch TV then clearly you’re never going to get the last word in AV excellence. However, by the standard of the very small number of TVs that do cost around the same, the 32HBD274B is actually a more than decent effort.