As people who have been knocking around in the AV world for far too long now, we can easily remember the days when you could find yourself coughing up as much as £1500 for a 32in CRT TV. So it’s actually quite hard to comprehend the Finlux 32H503: a 32in LCD TV that can be yours for just £228.99.

Not surprisingly such a furiously price-driven TV isn’t particularly over-burdened with features. There’s no online functionality, no DLNA networking support, no fancy picture processing (not even 100Hz), the native resolution of the 32in panel is an HD-Ready 1366×768 rather than a full HD 1920×1080, and the built-in tuner is only Freeview standard def rather than Freeview HD.

But really, when you’re talking about forking over under £230 for a 32in TV, such feature omissions are kinda beside the point. All you can really hope for at such a price point is a decent picture and sound performance. 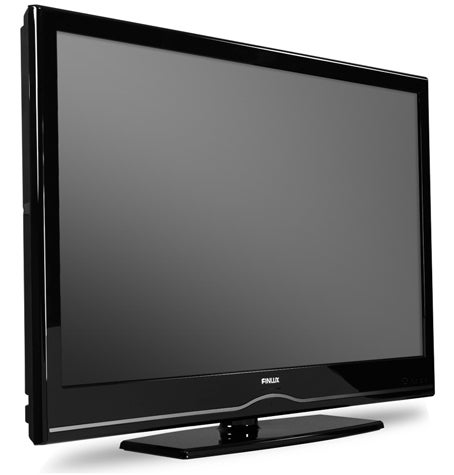 We’ll get onto finding out if the 32H503 very soon, we promise. But in the mean time, for all its inevitably stripped back nature, Finlux’s entry-level 32in TV does have one or two tricks up its sleeves.

The most useful of these centre around the USB port tucked away down its rear left side. For this can both play back video, music and photo files stored on USB-based memory devices, and record from the Freeview tuner to USB HDDs. Both of which can be classed as impressive tools on such a preposterously cheap TV.

Tucked away within its bright and colourful, if rather cheap-looking, onscreen menus, meanwhile, is an adjustable noise reduction feature; a quartet of backlight settings, including a reasonably clever ‘auto’ one; a sliding bar that lets you shift the colour between enhanced red and green saturations, and a ‘True Black’ option for the set’s HDMI ports that boosts the black level depth of HDMI sources. 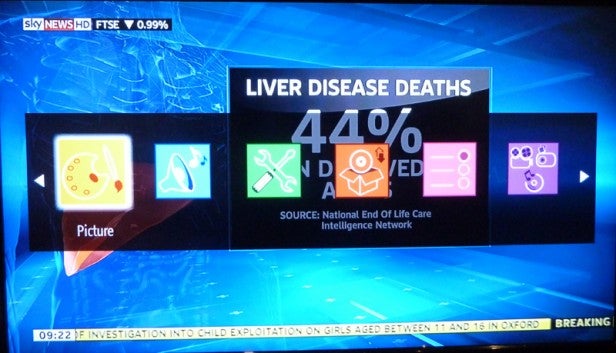 It’s a pity, perhaps, that there are only two HDMIs on the 32H503. But then we guess it’s not totally unreasonable for Finlux to figure that people buying such a phenomenally price-driven TV will either be looking for a set to go in a second room where there will be less sources, or else they’ll likely only have a fairly limited selection of digital video sources.

What’s also disappointing about the 32H503’s connections is that most of the important ones face straight out of the TV’s rear, making wall hanging the TV more problematic than it would otherwise be.

Again, though, in reality we don’t see many people really wanting to stick a 32H503 on a wall. For a start, it arrives already attached to a desktop stand. But also, with its rather wide black, angular bezel and chunky (by today’s standards) rear end it’s not exactly up there with a Monet in terms of something you’d want to adorn your wall with.

Starting out our tests with a selection of HD sources, it’s soon clear that as with the brand’s recently reviewed 55in model, the 32H503 is quite a bit better than expected.

The Finlux 32H503’s black level is particularly impressive. It’s common – almost standard, in fact – for very cheap 32in TVs, especially those from second and third-tier brands, to suffer with either very washed out black colours or else aggressive problems with backlight consistency, where dark shots appear unevenly illuminated. But the 32H503 largely avoids both these issues – so long, at any rate, as you call in the True Black feature when watching HDMI sources.

It’s likely, too, that the Finlux 32H503’s use of ‘old’ CCFL lighting rather than the trendier edge LED lighting system plays a healthy part in the set avoiding backlight consistency flaws. On the evidence of the 32H503 and a few of Sony’s impressive recent CCFL-using entry level models, we can’t help but think that edge LED should perhaps be actively avoided when you’re trying to put together a really aggressively priced TV. 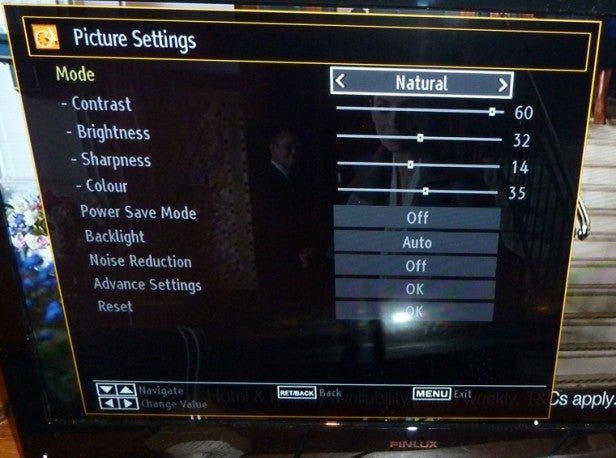 Another surprise from the Finlux 32H503 is the quality of its colour rendition with HD sources. Just using the Cinema preset and without bothering with the – in any case rather half-hearted – colour adjustments supported by the TV, colours tend to look actually quite credible. They at least achieve a good balance right across the available palette and look like they’re using a video-friendly ‘temperature’ setting.

The picture looks decently crisp and detailed too. Certainly we didn’t feel especially aware of the screen’s 1,366 x 768 – rather than Full HD – resolution, as the screen did a respectable job of reproducing such tell-tale HD delights as individual hair follicles, facial pore details and suit weaves.

Before anyone gets too excited, most of these strengths do come with strings attached. Where the black level response is concerned, the decent representation of a black colour does come at the expense of quite a bit of shadow detail during dark scenes, leaving them sometimes looking rather hollow in their darkest corners.

And although colours are more accurate than expected, the palette lacks vibrancy compared with the retina-singeing delights delivered by some much higher-end TVs. Skin tones can look a touch plasticky with some shots too, showing that the screen isn’t able to resolve quite as many tonal subtleties as more powerful and expensive sets. But to be fair, this isn’t a problem that really bothers you very often.

Much more problematic is the image’s judder. For while we might have been impressed by how little images blur as they cross the screen, with Blu-rays in particular there’s obvious stutter as objects move quickly across the screen or, especially, if there’s a horizontal camera pan.

Shifting our attentions to standard definition playback on the Finlux 32H503, it’s less impressive. But actually, only slightly. Certainly there’s nowhere near so obvious a distinction between the 32H503’s HD and standard def performances as there is with the previously tested 55in model.

Covering off the issues first, while standard def fare tends not to suffer as much with judder as HD, there does seem to a bit more motion blur. But it’s not excessive by any means.

More problematic is the set’s colour reproduction with standard definition. As happens surprisingly often with LCD technology, the subtlety and accuracy of the 32H503’s reproduced colour tones takes a noticeable dive with typical standard definition fair, resulting in a more compressed, less expressively painted and less well-balanced palette that tends to look uncomfortably ‘warm’ no matter what you do with the set’s provided colour adjustments. 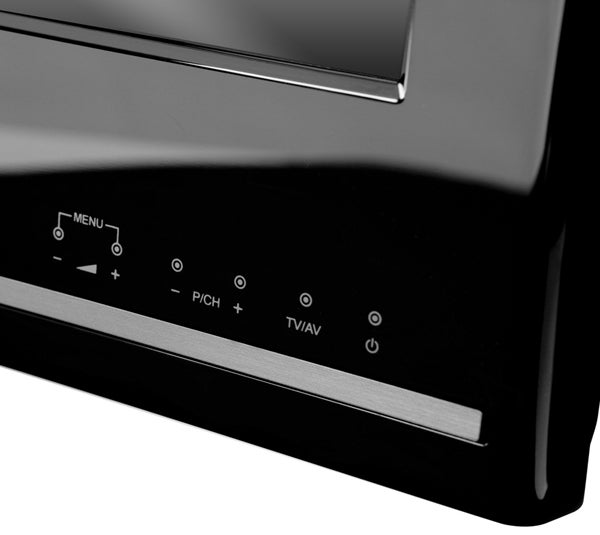 However, the picture doesn’t look too soft – a result, perhaps, of the relatively easy job of upscaling standard definition to a 1,366 x 768 rather than a 1,920 x 1,080 pixel count. The upscaling system also doesn’t make the mistake of exaggerating source noise while it goes about its business. There’s a bit of moiré noise over areas of striped fine detail, but the MPEG blocking and mosquito noise associated with digital compression doesn’t seem any more distracting than usual.

The Finlux 32H503’s audio performance, meanwhile, is pretty basic. It can deliver a reasonable amount of volume and the soundstage actually spreads out quite a way from the screen. There’s no sense of precision or real detail to the mix, though, and bass sounds ‘poppy’ and forced rather than deep and natural. But such is life when you’re dealing with budget TVs. And actually, the 32H503’s sound is slightly better than that of most bonkers-cheap small-screen TVs that come our way. 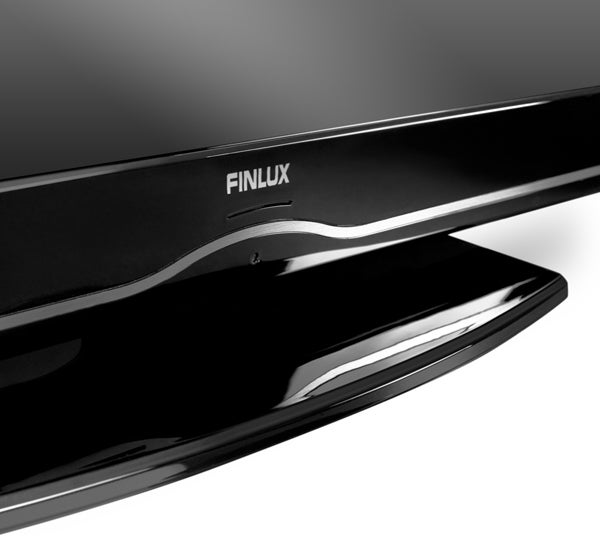 The last thing we need to cover here is the 32H503’s potential as a gaming monitor. And actually, it’s not too bad, at least where input lag is concerned. We measured around 37ms of delay between an image arriving at the TV’s inputs and it appearing on the screen, which counts as a pretty acceptable result and one that shouldn’t prove too damaging to your gaming performance.

We might as well admit it: we started out with the 32H503 thoroughly expecting to hate it. We’ve just seen too many rubbish mega-cheap 32in TVs from too many small and wannabe brands over the years.

However, while the 32H503 can probably never fairly be described as anything more than an average performer overall, the fact that it even manages to be average for £229 has to count as a minor miracle.