Having spent much of our time recently surrounded by unfeasibly huge and exceedingly expensive TVs, we thought it high time we took a reality check and focussed on something at the small, cheap end of the market. Cue the Finlux 32F8072-T on our test benches today: a 32-inch TV that can be yours for the grand total of £280. Despite having a Freeview HD tuner and Smart features built-in. 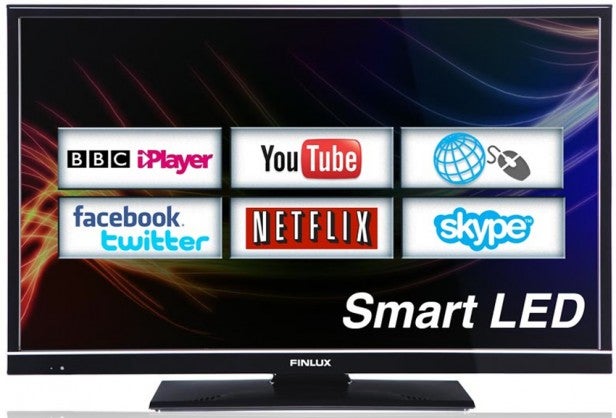 While you can feel the 32F8072-T’s budget nature in its plasticky finish and build quality, it’s not a wholly unattractive TV thanks to its reasonably slender chassis and the addition of a few splashes of silvery detailing to its mainly black fascia.

Its connectivity goes further than you might have expected for its aggressive pricing, too. Highlights include three HDMIs, two USB ports (one for inserting a provided Wi-Fi dongle), a coaxial digital audio output, a LAN port, an antenna input, and a Scart.

The HDMIs are only built to the v1.3 rather than v1.4 standard because the set doesn’t support 3D playback, but that’s entirely fair enough at the Finlix 32F8072-T’s price point. And anyway, 3D is pretty much a waste of time on a 32-inch TV anyway except, perhaps, for up-close gaming sessions.

The spare (non-Wi-Fi) USB supports recording from the built-in Freeview HD tuner as well as playback of video, photo and music files from USB storage devices. As for the network ports, they unexpectedly support both streaming of multimedia from networked DLNA PCs and access to Finlux’s online Smart TV service.

Not surprisingly this online platform is pretty content-light versus the rich worlds you get with some of the biggest AV brands. But it does manage to provide highlights of the BBC iPlayer, Netflix, YouTube, Viewster, DailyMotion and both Twitter and Facebook social media apps.

You can even use Skype on the TV if you cough up an extra £80 (which seems rather a lot when considered against the £280 price for the TV) for an optional USB camera.

Obviously, it would be brilliant if Finlux could manage to add the three other main UK catch up services at some point (the ITV Player, 4OD and Demand 5), but really having any smart services at all on a £280 32-inch TV has to count as a bonus.

Turning to the spec of the 32F8072-T’s screen, it’s a full HD affair illuminated by an edge LED lighting system. It understandably doesn’t have any local dimming functionality, but it does carry automatic backlight and contrast adjustments.

Not surprisingly for its money the 32F8072-T doesn’t carry full colour, white balance or gamma management systems of the sort now found on the majority of big-brand TVs.

That’s not to say it’s wholly without useful set up tools, though. Particularly handy are separate dynamic contrast and backlight adjustments, which we tended to leave set to Auto when watching TV but preferred to set to Low when watching movies, so as to limit the amount of brightness instability more contrast-rich movie transfers exhibit.

Another key tip would be to leave the set’s noise reduction systems deactivated while watching any sort of HD content, to stop pictures being unnecessarily softened.

Other handy features you might want to experiment with – though which we’re not going to tell you how to set, as they’re a matter of taste predominantly – are a skin tone colour adjustment, and an HDMI ‘True Black’ option that considerably improves the depth of black levels with HDMI sources, but only at the cost of crushing out more shadow detailing than many people will likely feel comfortable with.