While it’s all too easy for us to be dazzled by the the ultra-large, mega-stylish TVs that seem to be dominating our test benches right now, it’s actually relatively small and affordable TVs that are currently setting tills ringing the most in stores and websites across the UK. Sets a bit like the Finlux 26F6030.

So it seemed a good idea for us to take a short break from all the big high-end stuff that’s been coming our way lately by looking at a set from Finnish brand Finlux that has the potential to be the perfect model for the currently strong second-room market.

The Finlux 26F6030 is, as its name suggests, only 26in in size. And that’s not the only small thing about it, for its price tag reads just £199.99. A price that looks all the more appealing as it becomes apparent that the set isn’t quite as feature-light as you might expect. 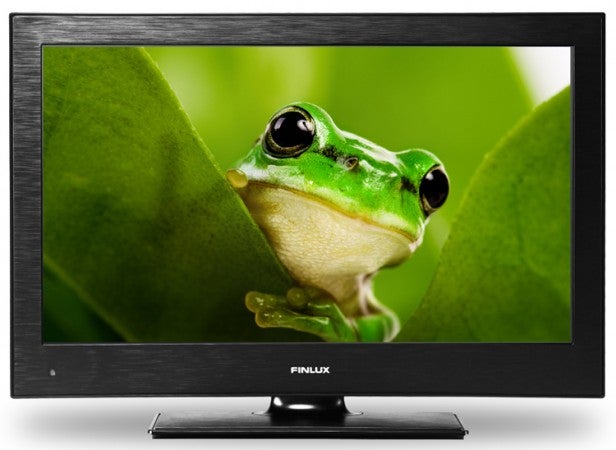 The 26F6030 isn’t even a bad looker. Finlux has used an unusual grain effect on the bezel that does a good job of hiding the set’s essentially plasticky nature. The stand feels rather flimsy, but it gets the job done. The only seriously negative thing about the set’s design is that its bezel is very wide by modern standards. But it’s hard to imagine this being a serious deal breaker for anyone in the market for a very affordable small-screen TV.

Connections
Connections are adequate rather than exciting. The HDMI count peters out at two, there’s only one Scart, and there’s no network support, Wi-Fi or otherwise. This latter absentee is particularly telling, as it reveals right away that the Finlux 26F6030 doesn’t have a built-in Freeview HD tuner – instead there’s just a standard def one. This isn’t as upsetting on this 26in TV as it would be on a larger screen, though. 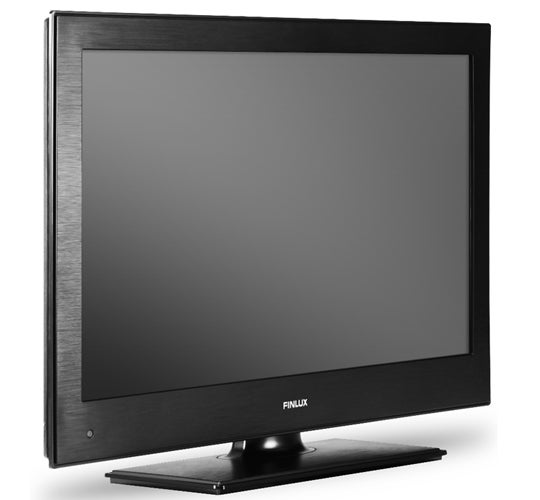 People thinking of wall-hanging a Finlux 26F6030 should note that despite the set being exceptionally slim round the back for such a cheap TV, its ‘hangability’ is considerably reduced by the fact that most of its connections stick straight out of the set’s rear, rather than being accessible from the side.

The upsides of the 26F6030’s connectivity are a D-Sub PC port (which can never be considered a given on budget small-screen TVs) and a USB port through which you can both play video, photo and music multimedia files or record from the Freeview tuner to USB HDD. We wouldn’t have expected to find either of these features on such a cheap TV.

Light fantastic
Also promising for such a cheap 26in screen are its full HD native resolution and its use of edge LED lighting rather than the CCFL illumination system you might have expected to see at the 26F6030’s level of the market. 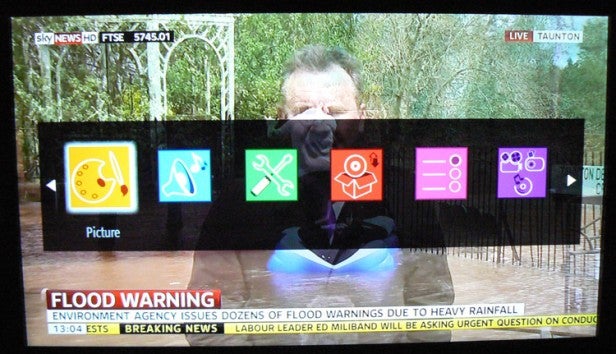 Delving into the 26F6030’s menus reveals them to be the same rather crude-looking affairs used on other recent Finlux TVs we’ve tested. While crude menu aesthetics don’t really matter, though, the rather small size of the text used within each main menu list makes them rather tiring to use unless you sit nearer the TV than usual.

Not surprisingly the Finlux 26F6030’s menus aren’t exactly stuffed with picture adjustments. There’s a quartet of picture presets, including Cinema and Game options, and you can adjust the backlight between auto (dynamic contrast) and three constant levels. Also provided are a trio of noise reduction options, a basic colour temperature adjustment, an aspect ratio adjustment, a sliding bar that allows you to shift the colour emphasis more towards red or green, and an HDMI True Black on/off toggle.

For the most part we’ve been pleasantly surprised by the quality of Finlux TVs that have come our way this year so far. And this trend is continued by the 26F6030. 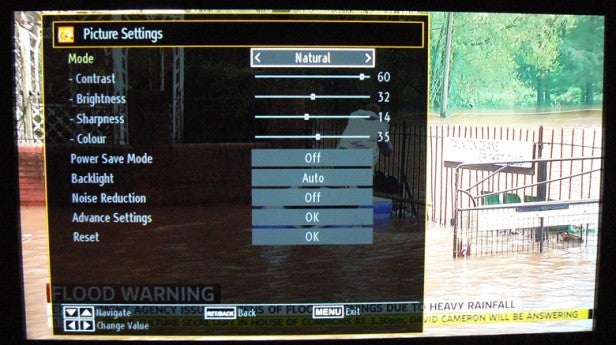 Most budget small-screen TVs suffer with a trio of fundamental problems: poor black level response, loads of image blur, and dodgy colours. But the 26F6030 neatly sidesteps all of these predicted pitfalls – or, at least, it doesn’t suffer from any of them nearly as badly as we would have expected.

The screen’s colour reproduction is especially pleasing. For instead of the overwrought, ‘PC-tuned’ tones so often seen at the 26F6030’s level of the market, you actually get an appealing combination of punchy, vivid tones and a natural palette that even holds good with skin tones – at least when watching HD.

Good brightness and contrast
Playing a bit part in this impressive colour effort is the screen’s well-judged combination of brightness and contrast. So far as brightness is concerned, even if you avoid the slightly over-aggressive Dynamic picture preset images look punchy and bold, even in a light environment like a conservatory or kitchen. Yet watching dark scenes reveals that its brightness doesn’t prevent the 26F6030 from having a passable stab at producing an authentic black colour to sit opposite its punchy colours and bright whites.

To be fair, we’re not talking here about black levels of a depth that remotely challenges the best efforts of Panasonic, Samsung, LG and the like; there’s certainly a slightly blue/grey undertone to dark scenes without the True Black HDMI option active. But there isn’t the overt grey mist and resulting huge loss of shadow detail usually seen on budget TVs.

In short, even really dark scenes are at least watchable on the Finlux 26F6030, and that’s an achievement in itself for £200.

One further note to add here is that we decided not to use the True Black HDMI setting, as while this did certainly improve black level depth, it led to fairly heavy amounts of shadow detail being squeezed out of the picture.

Motion handling
When it comes to motion blur, the 26F6030 isn’t perfect by any means. Camera pans or fast moving objects certainly lose a little clarity. But not so much that action-packed images become the sort of blurry messes commonly witnessed on budget LCD TVs. It’s in no small part thanks to this better than usual motion clarity, moreover, that the set manages to to delineate the difference between standard definition and HD sources better than most of its budget peers. Which is another way of saying that HD actually looks HD on the 26F6030, rather than like souped-up standard definition. 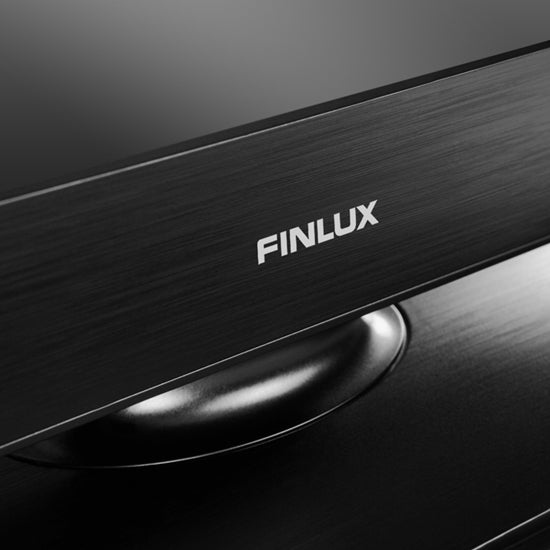 While the Finlux 26F6030 avoids the ‘big three’ problems associated with budget TVs, there are signs of its budget nature if you care to look for them. A lack of processing horsepower, for instance, can leave colours looking short of finesse when it comes to portraying subtle colour blends, resulting in occasional ‘striping’ and a slightly cartoonish, flat feel to large expanses of colour – especially if they’re relatively dark colours. The set’s viewing angle is limited too, with contrast and colour reducing nastily if you’re watching from more than 30 degrees down the TV’s sides.

Then there’s the 26F6030’s sound, which is unpleasantly thin, frustratingly muddy and painfully harsh when asked to produce anything more demanding than your average chatshow.

However, overall a TV as affordable but respectable as the Finlux 26F6030 deserves us to finish on a positive note. So we’re pleased to report that our tests measured input lag on the 26F6030 at just 18ms on average, with a maximum of 33ms. This is an excellent result for gamers, as it means the screen should have practically no negative effect on their gaming skills.

Verdict
The 26F6030 is a great option for anyone in the market for an ultra-cheap second-room TV, and it confirms Finlux’s status as arguably the most reliable of the current die-hard budget brands.