Final Fantasy 14 continues to go from strength to strength, and could reach a new crescendo with the release of Shadowbringers. Everything I've seen has me excited for what's to come, whether it's new races, classes or evergreen changes to the overall formula that will make things better for players old and new.

I might have still been in secondary school at the time, but alas, I was one of the cool kids and remember when the original Final Fantasy 14 crashed and burned. Square Enix delivered the most disastrous MMORPG experience of all time, opting to stew in its own archaic juices instead of rightfully taking influence from a world that had long moved on. World of Warcraft transformed the genre, altering mechanics that would never be the same again. Blizzard had scorched earth, and there was no turning back.

Fast forward to 2019, and Final Fantasy 14 is one of the biggest MMORPGs in the world, arguably overcoming World of Warcraft in the public consciousness with the comeback of a lifetime. A Realm Reborn reimagined the base game as a competent foundation with wondrous endgame content, drawing in millions of players from across the world. Heavensward and Stormblood, the first two expansions, only made things better. Now we come to Shadowbringers, a brand-new expansion that boasts oodles of new content, gameplay changes and more.

While it’s difficult to judge an expansion from a virtual slice of its offerings, I was hugely impressed by some of the new additions coming to FF14 as part of Shadowbringers. Whether it’s the new races, quests or settings, I can see fans taking to this like Chocobos to Gysahl Greens. 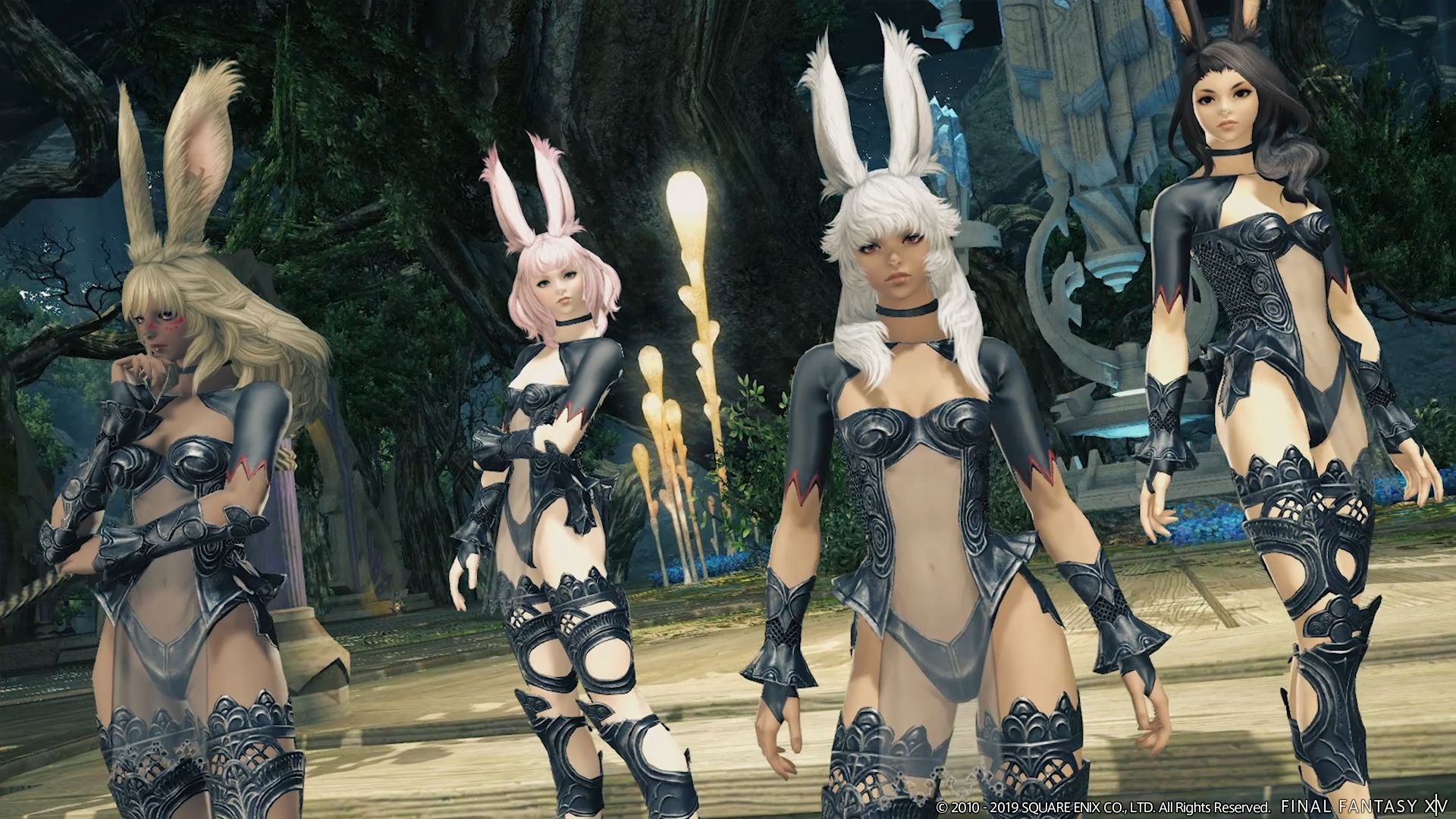 Shadowbringers pulls players away from the safety of Eorzea, planting them in a new world known as The First. Drowned in light, this strange new land needs The Warrior of Darkness to banish evil and restore darkness to the land. As expected, you’re just the warrior this otherworldly place needs to make things right. I adore the subverted expectations this expansion brings with it, having you banish light when you’d usually embrace such things to win the day. Personally, I’m hyped to reach for my inner darkness and kick some butt.

The Source is a sight to behold. It’s utterly gorgeous, awash with a spectrum of colours and paranormal fauna that makes it feel alive. Its aura is almost ethereal, so angelic that it’s clear something sinister awaits beneath the surface. Much like Heavensward and Stormblood before it, many zones welcome verticality. With the press of a button a mount will ascend into the sky, allowing you to soar upward, underwater; pretty much wherever you want. It remains liberating, and I spent an embarrassing amount of time simply taking everything in.

Locales include a whimsical cathedral surrounded by a lake that submerges ample ruins, hiding a past I expect players will uncover. Other highlights are a colossal forest where trees are decorated with fluorescent purple leaves, debris falling upon you when passing by. Finally, you have The Crystarium. Acting as a major hub for Shadowbringers, here you’ll find quests, merchants and narrative branches to embark on in the full expansion.

It’s worth noting I was playing an in-progress build of Shadowbringers without functional NPCs, dialogue or any narrative context. I was simply asked to choose a character and was thrust into this world. So, it didn’t have the impact it could have, with each character repeating the same recycled line of dialogue. It was unusually haunting, but also made me all the more excited for what’s to come. FF14 has already produced some stunning narrative moments, and I hope that streak continues here. 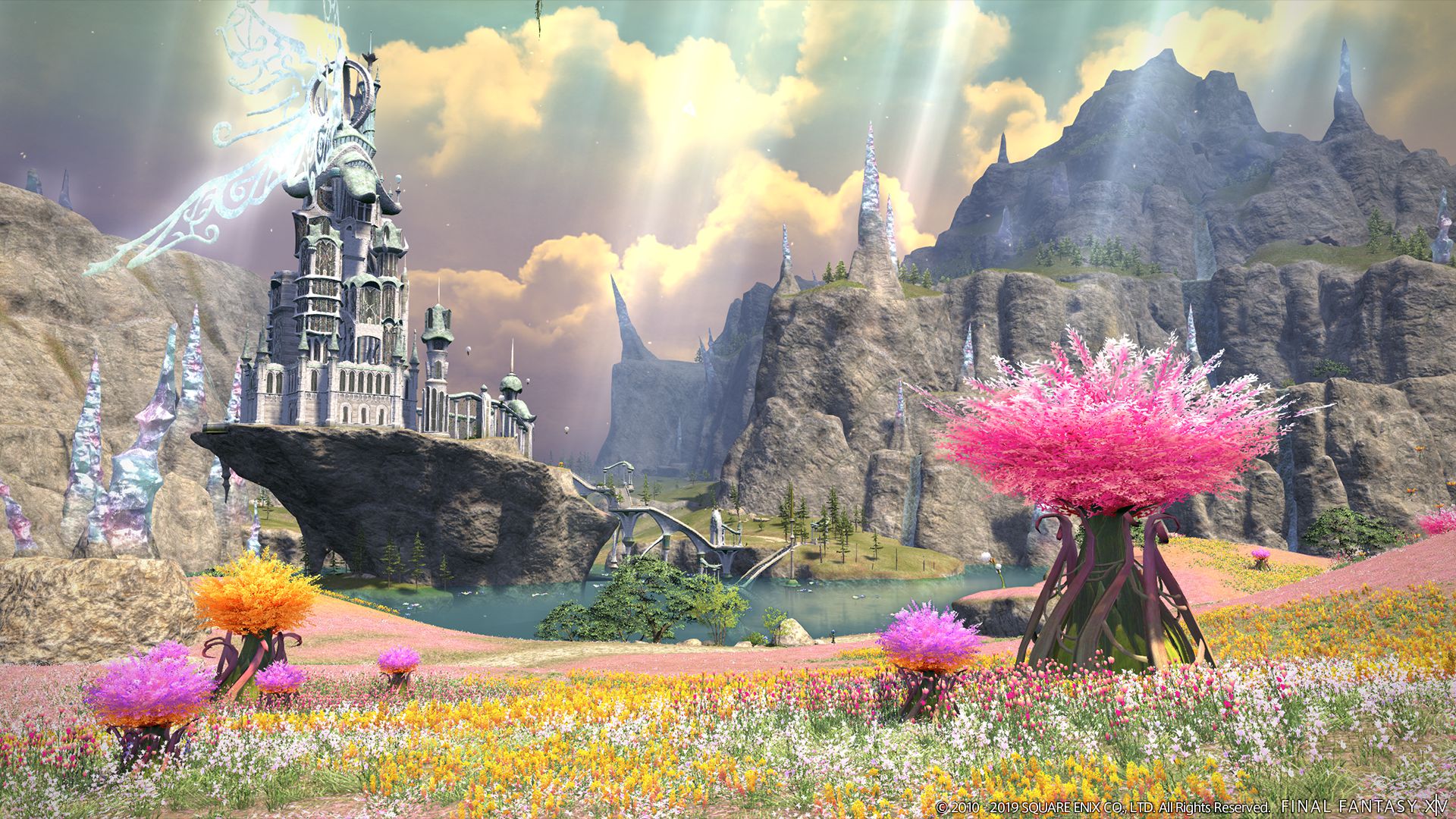 Shadowbringers comes with two new races, both of which are gender-locked at launch. Square Enix hasn’t ruled out further options coming in the future, but it seems unlikely given the resources required. Many will recognise the Viera from Final Fantasy 12, bunny girls boasting tall frames, even taller ears and a surprisingly authoritative elegance. They look excellent, and I’m already tempted to change my race once the expansion arrives.

The Hrothgar are large, beastly creatures covered in fur. You wouldn’t want to mess with them, but I bet they’re real softies at heart. If neither of the two new races catch your fancy, you can make your own using the free benchmark right now. Appearance data can also be saved ready for Shadowbringers’ launch, so you don’t waste hours picking the perfect hairstyle.

Races are purely aesthetic and don’t have a significant impact on gameplay. The same can’t be said for the two new classes debuting as a part of Stormblood. Dancer and Gunbreaker will be introduced at launch alongside their own distinct quest-lines and gear. During my time with Shadowbringers I spent extensive time with both, running dungeons and getting a rough feel about how they’ll play in the wider scope of Final Fantasy 14. 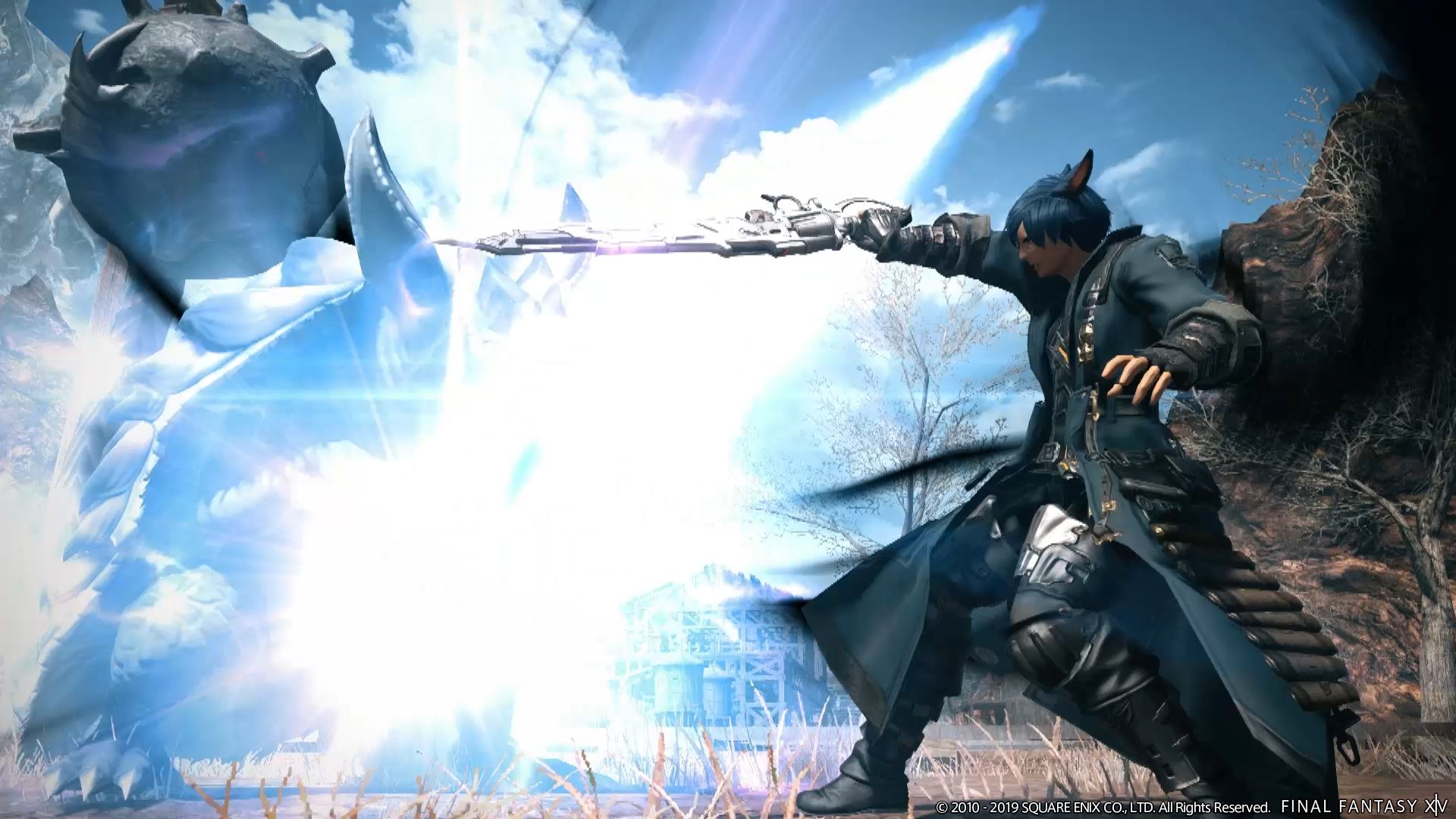 Dancer is a DPS class that’s incredibly faithful to its JRPG origins. Sporting elegant clothing and a pair of throwing weapons, their abilities are a mixture of rhythmic offensive tools and handy buffs for themselves and nearby allies. Some skills can instantly cure allies, launch you away from dangerous conflicts and bind foes in place, leaving them vulnerable for a barrage of hits.

Of course, you wouldn’t be a Dancer without a little bit of rhythm, and Square Enix plays into this notion with ability rotations that make it feel as though you’re seamlessly dancing across the battlefield. Successfully performing a sequence of abilities will grant you access to some devastating offensive and defensive powers that feel incredibly satisfying to execute.

I love a DPS class with adequate speed and versatility, and it seems Dancer ticks all of those boxes. Having only run one dungeon with both Dancer and Gunbreaker, it will be a long time until we find out how they mesh alongside other classes in the overall experience. Here’s hoping they all get along nicely.

Gunbreaker is a “tank” class that could have been pulled straight from Final Fantasy 8 and I wouldn’t know the difference. Well, I suppose the bunny girl slashing up foes does give it away a little bit. Sadly, I didn’t spend as much time with it as the Dancer, but it feels like an accessible tank class that’s perfect for attracting foes before pulling off an assortment of risky manoeuvres.

An on-screen gauge reminiscent of a revolver’s barrel can be filled with two bullets, used as ammunition for activating devastating skills. This rotation feels natural to pull off, slotting into the Gunbreaker’s capabilities perfectly. I should mention I’m not the most experienced tank in the world, because responsibility is scary, but this class made me feel more supremely powerful and capable of protecting my friend. That, and Gunblades are undeniably badass. 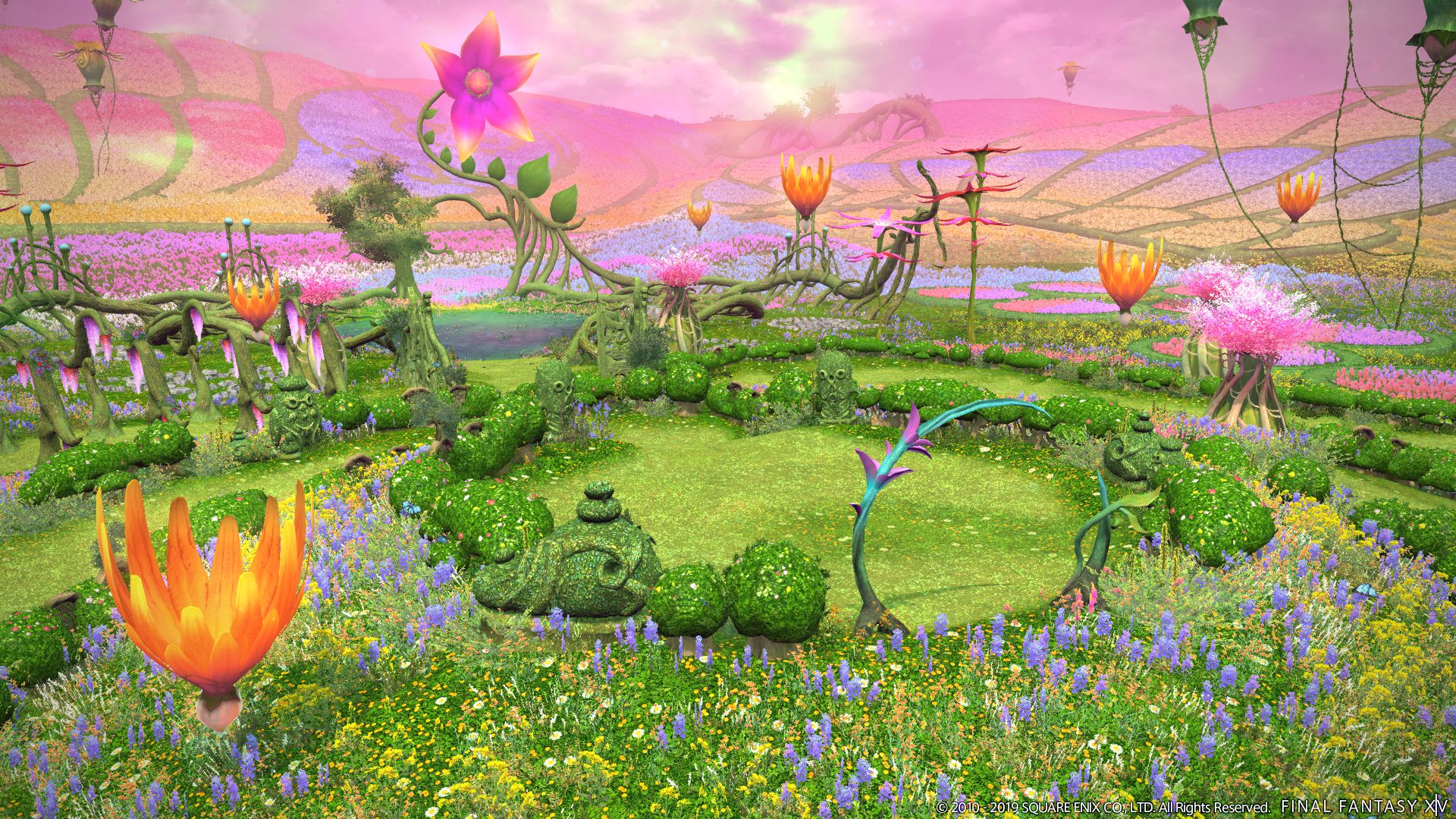 Outside of all the juicy content, Shadowbringers brings with it an assortment of huge gameplay changes. I won’t go into major details with class adjustments here, since it would take hours, but game director Naoki Yoshida has said many will be addressed. TP is being removed completely, while MP will now be capped at 10,000 across all classes.

Prior awkwardness around role actions has been adjusted, with classes now earning them at specific levels instead of needing to assign them manually. This should make things easier, doing away with the need to trawl through the UI again and again. Main stat material is being retired, so you’ll need to make changes to armour when currently sporting it.

As someone who is still overcoming the anxiety of sprawling MMORPG dungeons, the Trust System being introduced sounds like a blessing. This allows you to run dungeons with AI companions, as opposed to matchmaking with other players. Not only will this supersede the need for lengthy queue times, it will also add a narrative context to dungeons with dialogue and other neat touches.

Fighting alongside The Scions of the Seventh Dawn was super-enjoyable, although admittedly the pace of dungeons felt slower as a result. If you’re cool with this then it definitely isn’t a dealbreaker, and during my two runs of Shadowbringers’ debut dungeon I seldom encountered any issues. Those playing through A Realm Reborn will undoubtedly encounter excessive queue times, so having this as an option to experience past content sounds excellent.

To make things a little easier, I’ve put together a bullet-point list of major change/additions below:

Final Fantasy 14 continues to go from strength to strength, and could reach a new crescendo with the release of Shadowbringers. Everything I’ve seen has me excited for what’s to come, whether its new races, classes or evergreen changes to the overall formula that will make things better for players old and new.

Final Fantasy XIV Shadowbringers trailer – How does it look?

We’ve compiled all the latest trailers for Shadowbringers below:

Final Fantasy XIV Shadowbringers release date – When is it coming out?

Shadowbringers is set to launch across PS4, PC and Mac on July 2, 2019. Early access for those who pre-order will begin on June 28, although Square Enix has said this could change depending on server demand.