Prepare to be confused, Final Fantasy fans. In a way, Revenant Wings is a sequel to last year’s Final Fantasy XII. It features the same game world, the same characters and – to some extent – the same visual style, not to mention airships, sky pirates, and espers. It even has that disturbingly saucy rabbit-eared woman that I know some of you out there will have checked out at least once before wondering whether you might need urgent psychiatric work. Barring the obvious fact that Revenant Wings is hosted on the comparatively feeble DS, these things might lead you to expect more of the stuff you loved in last year’s PS2 epic. You’d be wrong. While it has many RPG trappings, the new FFXII is more of a strategy game. In fact, just to confuse you further, it’s not even a strategy game in the established mould of Final Fantasy Tactics, because here the action isn’t turn-based but real-time. Is the world ready for something as strange as a Final Fantasy RTS/RPG hybrid on the DS? Well, Square Enix has clearly put a lot of time and effort into making its game ready for the world. 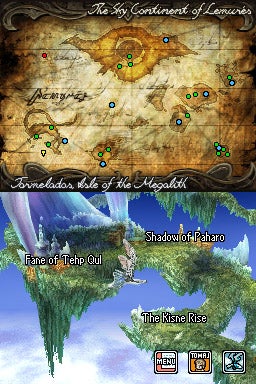 For a start, it kicks off with two familiar faces – Vaan and Penelo – living the high life as sky pirates in the aftermath of Final Fantasy XII. Joined for the prologue by pirate chums Fran and Balthier, they’re soon grounded by the loss of their airship. Opportunity soon comes knocking, however, as a mysterious derelict airship touches down in the city of Rabanastre. More by luck than judgement, Vaan, Penelo and a gaggle of their street-urchin mates end up on an unknown continent floating high in the sky above Ivalice, where the Aegyl – a race of winged humanoids – are under assault from a less principled breed of sky pirate and an armoured Judge with sinister intentions. It’s up to our gang to ensure that the Aegyl people survive and that those dark plans never reach fruition. 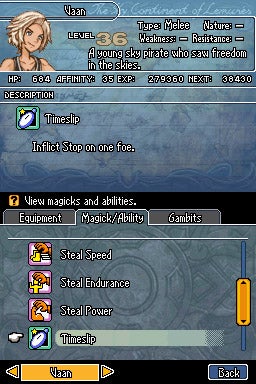 What that means, in practical terms, is a small amount of exploration and an awful lot of combat – and it’s in the latter that the differences between Revenant Wings and FFXII really kick in. You see, Revenant Wings does a lot to remind you of its illustrious forebear. While the graphics combine 2D sprites, 3D backgrounds and illustrated close-ups during dialogue scenes, the characters are recognisably stylised versions of the FFXII originals, and the scenery follows along the same grand Mediterranean/Moorish lines we saw before. The presentation carries on in the same styles of chapter titles and typefaces, and the cut-scenes – amongst the best I’ve ever seen on the DS – are a chip off the same old block. Even the terminology is the same. The summoned creatures, spirits and monsters that effectively functioned as special attacks in FFXII are still known as espers, and many of them are vaguely recognisable from their appearance in the PS2 game. You can still program characters with AI routines known as gambits – though these work in a much less sophisticated way than they did in FFXII.

However, whereas FFXII merged the turn-based action of the classic Japanese RPG into a new style of real-time combat, much as Bioware did when moving from Neverwinter Nights to Knights of the Old Republic, Revenant Wings is structured around a series of RTS battles. Vaan, his friends and his allies take the role of squad leaders or heroes, while espers play the part of the units you’d find in a traditional RTS. Through the use of crystals, espers can be summoned through gates built into the floor of each map. Send them or lead them into battle, capturing enemy summoning gates along the way, complete the map’s objectives and you’ll be rewarded with a cut scene and some new mission options on the main campaign map. While optional side-missions are introduced later on, things like side-quests and non-combat missions are notable for their absence. Revenant Wings is all about the strategy, you see. 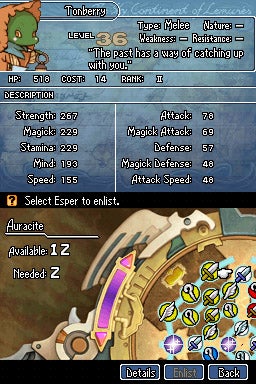 Where the RPG elements do come in are in the equipment and career progression options. New arms and armour can be won in battle or bought with the spoils from a store on Vaan’s airship (why Vaan’s shipmates can’t just give him the good stuff and wish him well is beyond me, but there you go). As the various heroes fight, they level up and become more powerful, and as the party grows in power, so does the ‘Affinity’ of the characters – the property that allows them to summon and control more espers or more powerful espers. What’s more, Revenant Wings also has its own version of FFXII’s license board: a ring of pacts which enables our heroes to forge alliances with new and more dangerous espers as the game goes on, each unlocked esper opening up new options in the adjacent slots on the ring. 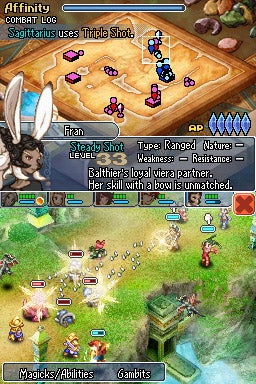 Cleverly, the various espers and heroes are already arranged in a basic Condorcet cycle, with melee troops vulnerable to flying troops who are vulnerable to ranged troops who are vulnerable to melee troops in turn. On top of this, espers have an elemental type that makes them more or less vulnerable to attacks of other types. It’s a good system, because while it’s simple enough to get your head around the different units – which is essential in a game that features over 50 different espers you can summon – there are enough combinations and new wrinkles to keep the combat interesting long-term.


Now, I always have my doubts about whether an RTS can work on the DS format, but Revenant Wings does a mostly excellent job. You can select units by tapping them with stylus, lassoing a selection or choosing the hero in command from a tab at the top of the touch-screen. The upper screen gives you an overhead map and unit-specific info when requested. Once selected, you can send the unit to a new position by scrolling the screen using the D-pad and tapping their destination with the stylus, or ask them to attack by tapping the enemy unit of your choice. Provided the battle is not too heated, it’s not too hard to arrange your troops, keep up a steady flow of backup espers, attack enemy positions and defend against any counter-attacks.

Unfortunately, the battle frequently gets too heated, at which point several weaknesses in the control system emerge. Most annoyingly, you can’t select a unit and then give multiple commands – you have to reselect that unit before each. As the number and the size of the sprites onscreen means battles between multiple units get pretty messy pretty quickly, this can make it hard to keep everyone moving in the right direction and attacking the foes you’re aiming for. Keeping your heroes alive – particularly your healer, Penelo, and the Aegyl warrior, Llyud, with his useful ‘restore’ ability – is crucial, which can make it frustrating when they disappear into the scrum before you know it. It’s all too easy to lose ten minutes of hard work with a stupid mistake. Square has implemented a range of button shortcuts to make things easier, and grouping units of a particular type under the most relevant hero is a very useful trick, but there will be times when you’ll still struggle to maintain command. 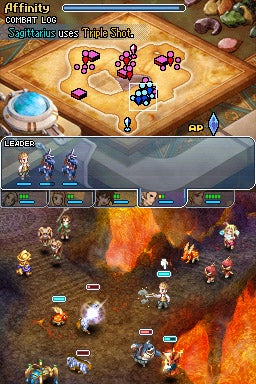 While I’m moaning, the difficulty level is a mite up and down as well. In most cases a change of tactic or an adjustment to your esper selection will work wonders, but Revenant Wings definitely has its brick wall moments, and your head is likely to get banged against them. Meanwhile, whoever thought that the combination of this control system and a stealth mission worked should have spent a little more time playtesting their own game.


Overall, there’s a lot to like about Revenant Wings. It’s well-constructed, good looking and solidly paced, and most missions are just about bite-sized enough to make sense on a handheld format – something that can’t be said of some other mobile strategy and RPG titles I might mention. Crucially, it’s also built to last. Revenant Wings is not the kind of game you’ll crack in a single weekend. Even the music is excellent. 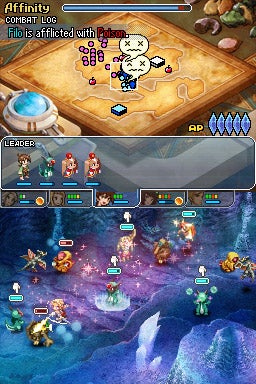 All the same, I can’t help feeling that it lacks something – perhaps addictive qualities, perhaps atmosphere. Maybe Square Enix didn’t feel that this was the right game or the right platform for FFXII’s stately melodrama, but the lighter tone and slighty storyline makes Revenant Wings feel a little less compulsive and a little more lightweight. And while the battles themselves are enjoyable, only a few boss encounters have any real sense of drama – the majority simply merge into the reasonably entertaining whole.


This isn’t to put you off Revenant Wings if you enjoyed FFXII or if you simply fancy a good handheld RTS – it’s just that I don’t think the game has such broad appeal as, say, Advance Wars: Dark Conflict or Legend of Zelda: The Phantom Hourglass. Bear this in mind and don’t get too carried away by the FFXII connection, and I doubt you’ll go away disappointed.


A solid and entertaining offshoot of Final Fantasy XII and one of the best implementations of RTS gameplay on a handheld format. However, while Final Fantasy fans will love the way characters and concepts have been carried over, Revenant Wings lacks a little in the thrills and drama stakes.