I don’t know whether Square-Enix and Nintendo intended My Life as a King as a WiiWare statement of intent, but it certainly does the job. Over the last couple of years we’ve learnt what to expect from console game download services – simple arcade hits, ports of old classics, quirky puzzle games, polished indie favourites. Some are good, some are great and some appalling, but most either feel lightweight or lack the polish you expect from a full-priced, store purchased game. WiiWare seems to be going in a different direction, with established franchises, new ideas and proper, slick games from well-known developers. If Nintendo can keep putting out products as good as this and LostWinds (to be reviewed later this week) then they might create something very special indeed. 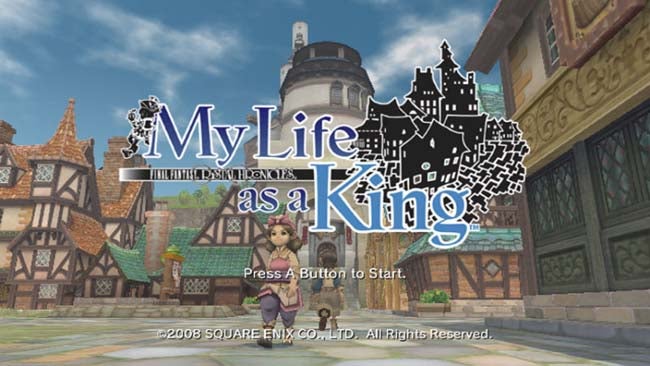 Of course, when the Crystal Chronicles name is attached we all know we can take the Final Fantasy moniker with a pinch of salt. Like other games in the CC series, My Life as a King uses some of the trappings of earlier titles in the saga – the odd monster, the Gil currency, the weird cat-like Moogles, the white and dark mages – but features a very different strain of gameplay. In fact, My Life as a King isn’t even an action RPG, but a strategy title. Think of it as a cross between Harvest Moon, Sim City and the cult PC kingdom-management game, Majesty.


The youthful leader of a nomadic people who have been wandering the earth since the miasma plague told of in the first Crystal Chronicles game, you find yourself in the ruins of a walled settlement. It’s up to you to rebuild the city, fortify the people and purge your new kingdom of the forces of evil. This time, however, you won’t be doing the hard work of adventuring yourself.


Instead, all that evil purging is the job of your subjects, and your business as ruler is to keep them in order and give them the resources and support that they need. Wandering the streets from a zoomed-in, third-person perspective, you can use a magical power known as ‘Architek’ to form buildings using nothing but a crystal substance called ‘Elementite’. Building houses attracts families, and from every family comes a potential adventurer. 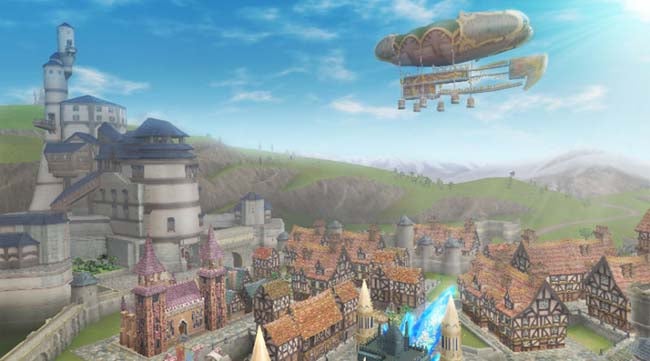 Commission them in the king’s service and they’ll go out and fight for you. To direct them, you can use a system of bulletin boards and behests. Build a bulletin board and then post a behest, choosing a dungeon area to target from the map, and each morning adventurers will gather in front of it, waiting to be despatched on your service. Some will come back weary and defeated, but it only takes one to finish exploring an area, clean out the monsters or do away with the boss and you’re another step closer to victory.

Of course, a city of adventurers can’t thrive without other facilities. Some, like the weapons or armour shops, are essential if you want your brave charges to be able to tackle more difficult quests. Others, like bakeries and parks, improve morale and keep your fighters fighting fit. As you move on, you’ll find other buildings become essential to further progress.


White Mage and Black Mage Academies enable you to recruit the healers and sorcerers you’ll need to defeat specific enemies. Gambling houses boost morale and help you recruit thieves, who are more proficient than regular adventurers in the gathering of loot. Without a Guild Hall you’ll be unable to commission more adventurers or manage their pay. Build a tavern and you can organise adventurers into parties and use their combined powers to wipe out more dangerous foes. 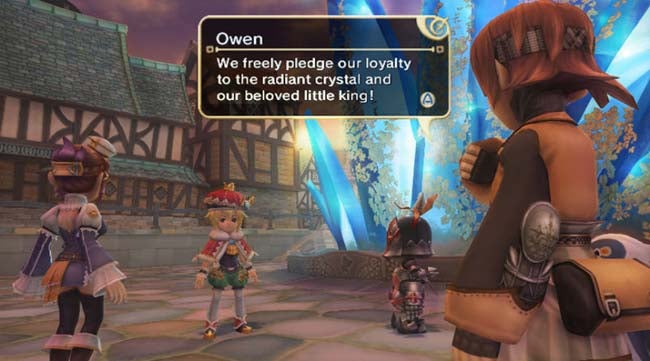 We’ve had PC strategy games before, including Majesty, that have done this kind of thing from a remote, regal distance. I think that a big part of what makes My Life as a King work is that it operates on a smaller, more intimate level. The economics – basically maintaining a steady supply of gold and elementine – are fairly elementary, leaving you to be a fairly hands-on monarch. The more time you spend out on the streets, talking to the local population, the better you’ll do in the game. Every person in town has a name and some kind of life going on, and their morale is raised just by talking to you.


Adventurers need care and attention. If there’s trouble at home or they’re too tired to battle, then there’s no point letting them go on your latest behest – it’s better to persuade them to rest instead. Meanwhile, your adventurers grow in experience and power as they fight monsters and complete behests, and you can also boost their skills by building and funding the academies that train them. 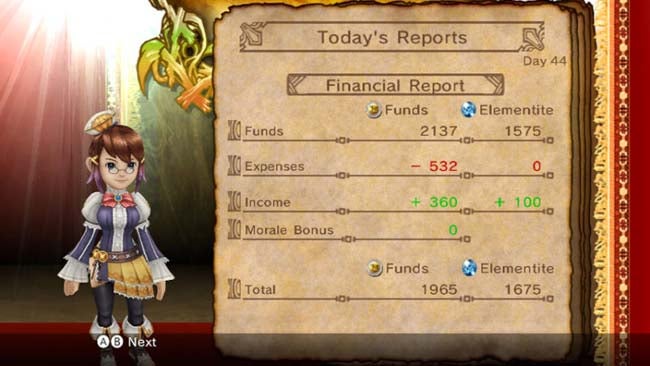 It’s up to you to balance your missions so that your newer recruits have something manageable to build their skills, while your more experienced, hardcore scrappers go up against the major-league bosses. And if a minnow wants to go toe to toe with a beast that’s beyond their ken, then you’ll just have to tell them to go and gather experience instead.


A lot of this comes down to routine. Both the adventurers and the general population have routines, and working out how to get your adventurers most efficiently from home to bulletin board to city gate turns out to be crucial. By planning where you put the shops, academies and taverns you can stop them wasting half the day just navigating the city, and get them out there in the dungeons doing good. You too have a routine, starting the morning with reports and behests, then sending the adventurers off on their way. Then there’s a little time for chat, management and building before your advisor comes to summon you to bed. And not in the way you might be hoping for, either. You’re only a young king, after all!

What’s so good about all this is that the game has its own relaxed pace, and what at first seems like a very simple kingdom management sim turns into a surprisingly rich and deep affair. In terms of feel it’s a bit like the cult-classic Harvest Moon series, but with a bit more action and a slightly more urgent pulse. The smaller scale keeps things down to earth, and while the game surrounds you with quirky characters typical of the Crystal Chronicles series, most taking up an advisory role, it’s not long before your adventurers develop personalities as well.


In the Andrews household Mark is renowned as a solid, no-nonsense hero, Iago is the guy who runs away when the going gets tough, while Ben is the black mage to go to when you want results. Your experiences will differ, but that’s all part of the fun.


On top of all this, My Life as a King even packs in an over-arching story, with the game divided into chapters that take you through the struggle to establish the kingdom, solve the mystery of your missing father and take on an evil dark lord. If it’s all slightly clichéd – and it is – then it gets past that with a knowing charm and a wit pitched 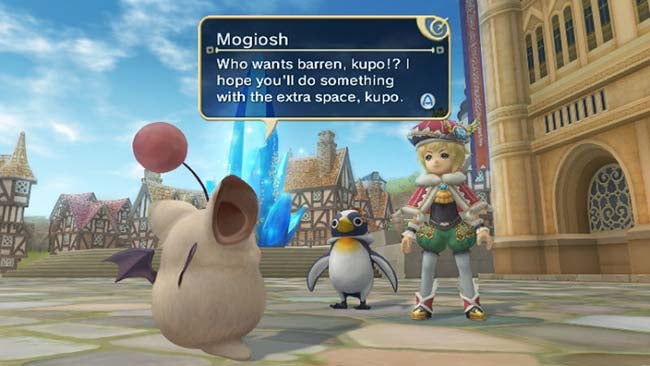 And that last bit is important. If you’re a battle-scarred veteran of a dozen PC strategy games then My Life as a King probably isn’t for you. You’ll feel constrained by the number of buildings you can build, the number of subjects you can manage and the lack of direct control over the adventurers while they’re out on quests.


The visuals, too, will be off putting to some. My Life as a King looks like a decent Gamecube game (which is more than many full-priced Wii games can say) and makes good use of the visual style Square-Enix has built up in previous Crystal Chronicles games. It’s short on spectacle, but bright and lively, and watching buildings erect magically always gives you a warm glow of satisfaction. It is, however, all rather cute and more than a little twee. If that makes you gag, stay away.


But for the more casual or younger gamer – i.e. the Wii’s biggest audience – it all works brilliantly. Time and time again I’ve been impressed by how well Square-Enix has retooled a genre to make it appeal to a new audience, giving them just enough to do then slowly drip-feeding in more detail and complexity to keep them interested. The cycle of exploring dungeons, unlocking new buildings and building your heroes is compulsive, and you’ll find it hard to tear yourself away once a few hours have effortlessly passed.

It’s not as if My Life as a King is flawless, however. There are times when you can almost feel the reins holding you back, or when you’ll suspect that this is a game that’s actually pretty hard to lose if you follow the most basic hints. There are also plenty of niggles. Why do the wrong adventurers so often appear at a bulletin board? Why can you never find the Moogle who conceives new buildings when you want him? Why, when you use your morale boosting ability, does everyone disappear? 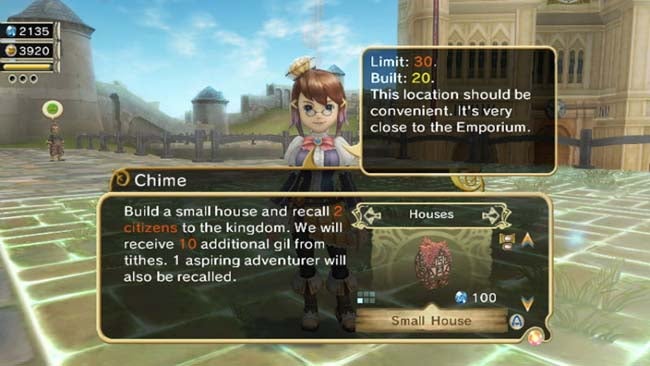 On top of that, it’s clear that Square-Enix intends to make up for the relatively low purchase price – though bear in mind that this is the most expensive WiiWare game – through micropayments, charging you for things like additional playable races, buildings costumes and quests. You can enjoy the game perfectly well without these, but the obvious commercialism still rankles. Let the kids loose on this, if you have any, and you’ll soon experience the horrors of pester power. And while you can play more conventional, grown-up strategy games many times over, I doubt you’d want to play through My Life as a King more than once or twice.


All the same, this and LostWinds augur well for WiiWare. This is a fine little game and one that throws the superficiality and low production values of many full-priced Wii games into sharp relief. The telling thing for me is that if you buy and enjoy My Life as a King, then you’ll get more than your money’s worth from it. It’s not the biggest or most extensive strategy game around, but it is approachable, entertaining and very different from the norm.


An interesting departure for Final Fantasy, which turns the kingdom management sim into something small scale, accessible and fun and a good introduction for kids and casual gamers to the strategy genre. It’s an auspicious launch title for WiiWare.