There’s a reason why external controllers for iPhone and iPad games have never really taken off, even with the weight of Apple’s blessing behind them. They take one of the format’s biggest selling points, the touchscreen, and casually throw it under a bus.

It’d be a bit like handing a hardcore racing enthusiast the keys to a brand new Ferrari, hiring out the freedom of the Nürburgring to test it on, being graced by the perfect weather and a crowd of thousands ready to cheer on every twist and turn…and then removing the engine, cutting out the floor with a pen knife and tasking said enthusiast with running around the track powered by only their feet, in true Flintstones’ style.

Games not built for touchscreen based play rarely play well on iOS, namely because the developer is forced to make a decision. Either they go back to the drawing board and build the game from the ground up specifically designed for taps and swipes, or they compromise and lay over a controller-based set up across the screen to keep the original controls in tact. Sadly, in the case of Final Fantasy 7 – here rolling out on iOS almost twenty years after its debut on the original PlayStation – Square Enix has opted for the latter, and its a decision that haunts the game throughout. 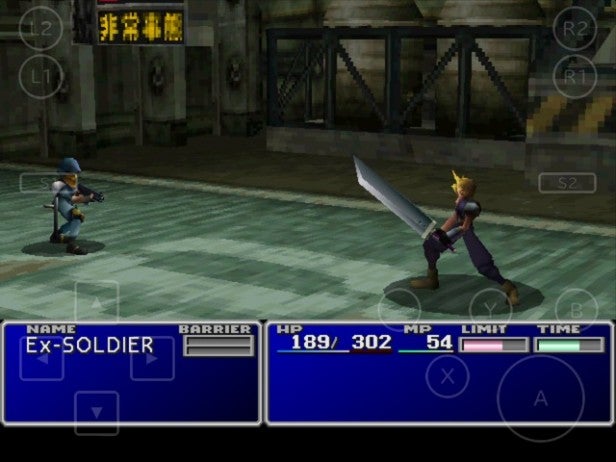 That’s not just because it means that more than half the screen is covered by (albeit transparent) buttons from start to finish, but also because it says a lot about the attitude the publisher has taken to the port as a whole. Aside from the fact it’s technically now possible to take an entire console JRPG from two decades ago and run it on a device that fits in your pocket, there seems little reason for Square Enix to have made such a move. As a result, it’s all a bit half hearted.

On that technical basis, Final Fantasy 7 manages to be as impressive as it is dated. Even a cursory browse of Wikipedia will highlight the importance of the game in the Final Fantasy series, credited by many as being the JRPG that brought both the then SquareSoft’s flagship IP and JRPGs as a whole to the west in a big way. The whole of the game is here, including what were then some mightily impressive 3D visuals running at an incredibly smooth rate – visuals that, thanks to the iPhone’s Retina display, are now revealed to be the flat background renders they always were, with the game’s assortment of characters a little crudely plastered on top.

After twenty years, however, that’s a glitch that can quickly be forgiven. More familiar to the modern JRPG player will be the turn-based combat system as you build up your experience by taking on an array of different creatures, many of which wouldn’t look out of place in a modern day Pokémon release. Curiously, this iOS version of Final Fantasy VII gives you the ability to turn off the random battles, which make up the bulk of your encounters – a move presumably designed to accommodate wary newcomers, but one that actually hampers your ability to level up and progress at a reasonable pace. 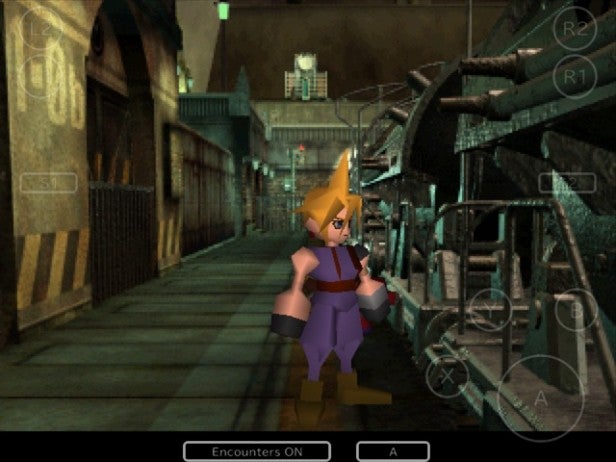 Aside from a few other shifts that were no doubt designed to help the game accommodate its new home, this is Final Fantasy 7 as its original creators intended. That, however, is part of the problem. Save points are spaced out far too widely (and, indeed, the mere notion of needing a ‘save point’ in the first place went out with the ark long ago) and are a confusing mess when you do encounter them, making this an adventure not suited at all for the short bursts most people take on mobile games in.

What’s more, this is a game that feels just as old as it actually is. The JRPG genre has moved forward since 1997, even if it isn’t immediately apparent how. Although Final Fantasy 7’s somewhat sombre tale of Cloud Strife (who you can now rename, interestingly enough) and his efforts to reconcile his past in the midst of a whole host of blood being split is not out of place in 2015, the world it sits in – weighed down by vast amounts of empty space that would surely now be culled – sadly is. 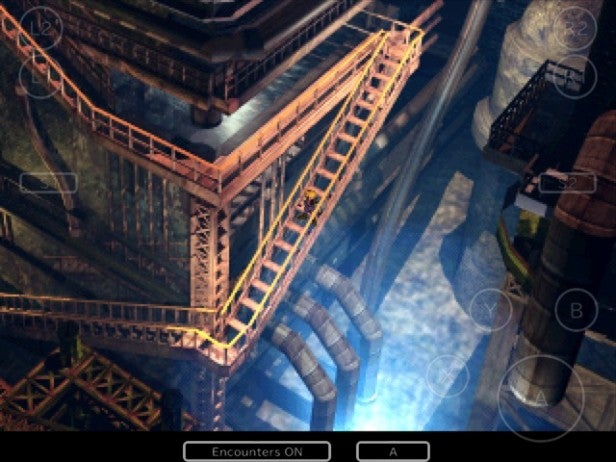 Square Enix has neither opted to port Final Fantasy 7 over without changing it, nor has it changed it enough to make it a suitable addition to the App Store’s line up. As a result, it’s a messy middle ground that risks alienating newcomers from Final Fantasy as a whole and serves only as a refresher for those who took on the original version on PlayStation all those years ago.

Indeed, for the gamers this Final Fantasy VII will actually appeal to, this review is somewhat surplus to requirements, given they will have likely downloaded it the second it came out. It’s that very certainty that perhaps explains just why this is the very definition of a half-hearted port – true Final Fantasy fans will likely buy it anyway.

Verdict
Impressive on a technical level if only for squeezing an entire console JRPG into one download, Final Fantasy VII unashamedly looks like the near 20 year old game it is, and it’s owing to Square Enix’s decision not to remake it in the iPhone’s image that leads to many of its faults, with save points and virtual button based controls undermining what is otherwise one of the genre’s classics.