Available on PC
Final Fantasy 15 Windows Edition is exactly what it says it is: a PC version of the epic JRPG from Square Enix that originally won us over on the PS4 and Xbox One over a year ago.

For those who missed it the first time round, it’s a story-driven, open-world RPG that sees you step into the shoes of protagonist Noctis Lucis Caelum, a prince in the Kingdom of Lucis, as he travels through the war-torn planet of Eos.

Throughout the adventure he’s accompanied by a group of friends who also sound like they belong at the Chelsea Flower Show – Gladiolus Amicitia, Ignis Scientia and Prompto Argentum – who make up your core party during combat and exploration.

Gameplay follows the same format as most modern RPGs. You jump from location to location on the world map, picking up quests and enjoying the four compadres’ growing bromance as you go.

The game’s core mechanics remain pretty much the same as in the PS4 and Xbox One versions, and you can find a more in-depth look at them in our console Final Fantasy 15 review. 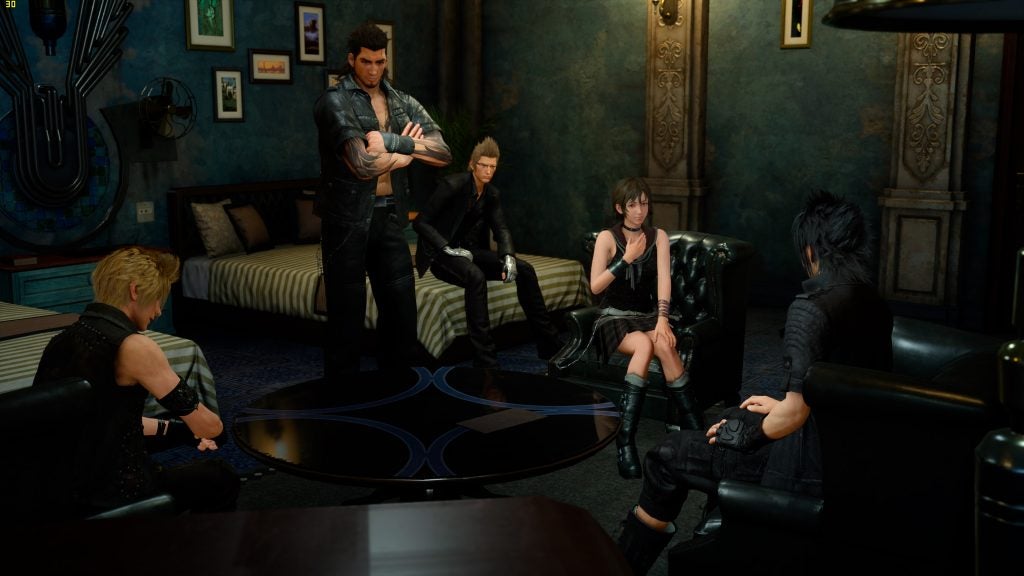 At first glance there’s not much new stuff in Final Fantasy Windows Edition, outside of the inclusion of all the DLC – which lets you explore what Noctis’ team are doing during a later section of the game’s narrative.

You also get a first-person mode, which I generally found useless for anything other than sightseeing, plus a few new side quests and the surprisingly fun “Comrades” multiplayer mode that’s also is now available on console. Comrades puts you in the role of a customisable ally to the main foursome, and tasks you to complete cooperative multiplayer missions online for them.

As a result, you may justifiably wonder, outside of its new format, what makes the PC version of Final Fantasy 15 different?

Well, as it turns out, quite a lot. If you’re yet to explore the world of Eos, Final Fantasy 15 Windows Edition is the best version on the market, for two key reasons: the oh-so-pretty graphics and the improved framerates.

The console versions of Final Fantasy 15 – particularly the PS4 Pro’s – weren’t exactly ugly, but for the most part the PC build blows them all out of the water, thanks to the addition of an exclusive Hi-Res asset pack, which brings with it a number of improved 4K textures. You’ll also find a number of graphics upgrades that can be manually turned on or off in the game’s settings.

The Windows version comes with four basic presets: Low, Middle, High and Highest. Within each you’ll find further slider and toggle controls for most of the standard graphical settings you’d expect. These include controls for lighting and shadow detail, plus more technical ones like anti-aliasing, geomapping and motion blur – all stuff you’d expect to see in any PC game.

Out of the box I found the Middle setting was just about comparable to console versions at 1080p, but High and Highest were a clear cut above. Cranking the settings up in 1080p or above, the game features more defined shadows, better lighting, sharper edges, better depth of field and just about any other visual improvement you can think of. You can see four screenshots taken of the game in its four graphics settings at 4K below. 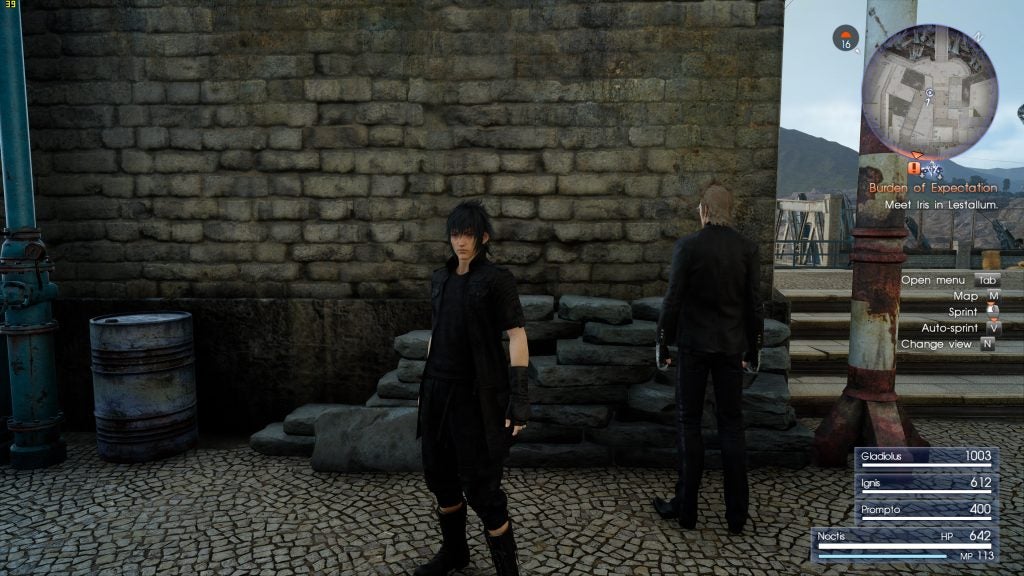 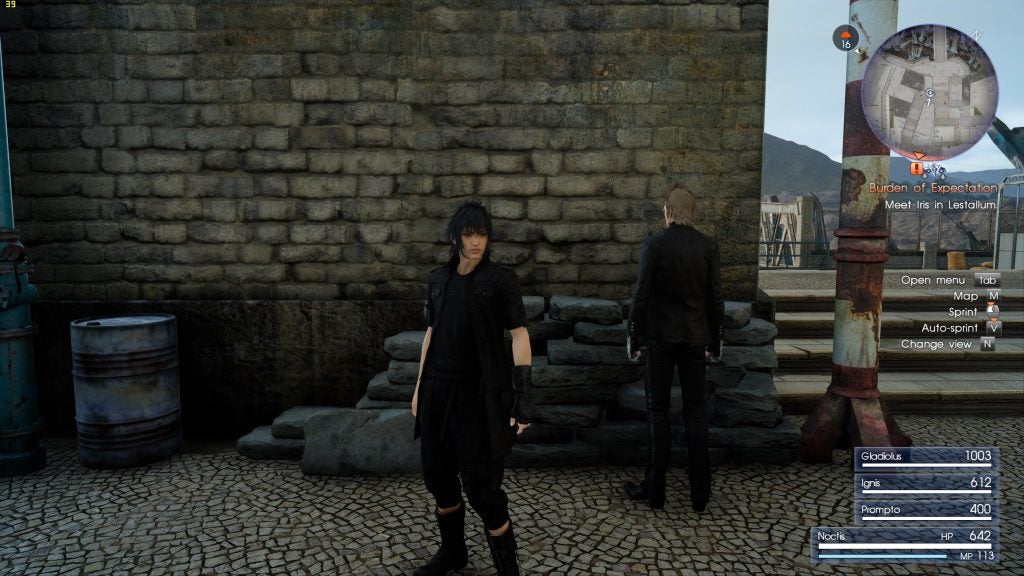 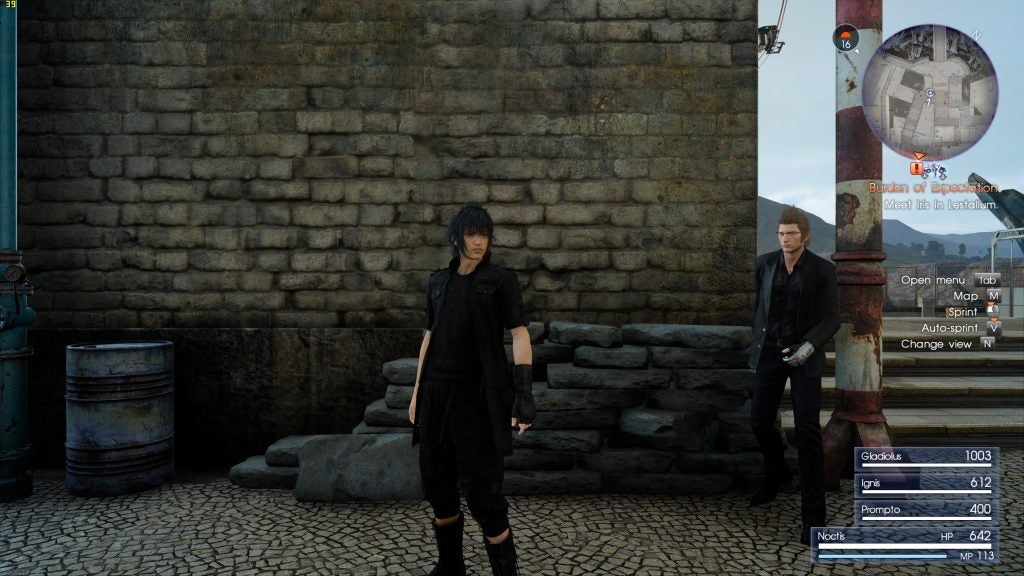 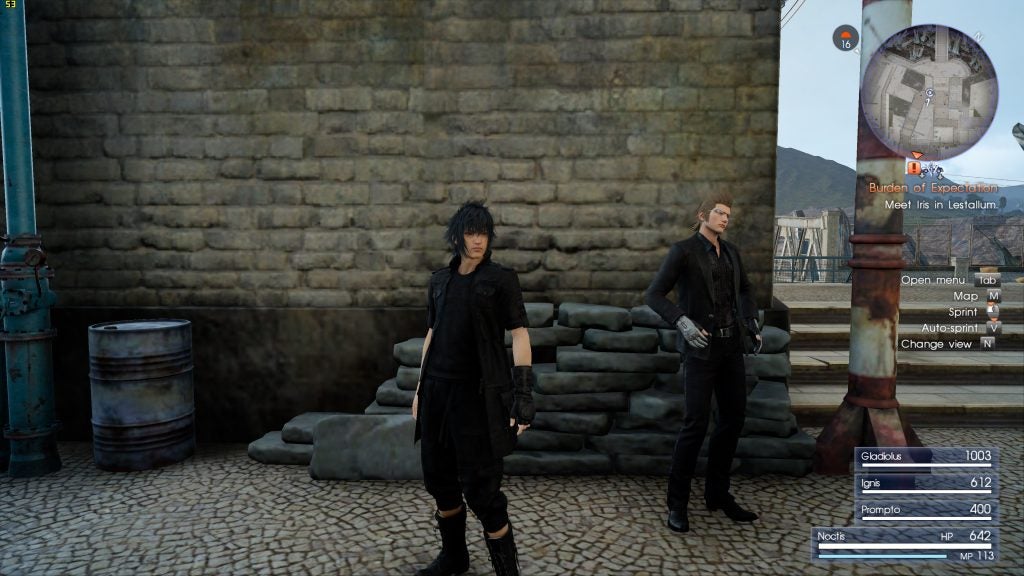 At High settings you can clearly see improved sharpness, more defined lighting effects, higher-resolution textures and a pleasingly subtle difference in depth of field separating objects in the distance. Going up to1440p or 4K, things only get better.

TurfEffects is a nifty bit of tech PC gamers may have sampled in Ghost Recon: Wildlands. It generally lets developers create more dynamic shrubbery with more realistic physics and animations. Shadowlibs completes the foursome and is another bit of lighting tech that aims to let the game create and map more realistic soft shadows.

None of these settings will be new to PC gamers who’ve played other Nvidia-optimised games – anyone The Witcher 3 vets will likely be cringing at this point, remembering the insane performance load the Hairworks tech requires to work. But, if getting the best visuals is your priority, they’re great.

Below you can see two screenshots of the game running in 4K on Highest – one with the Nvidia extras on and one off. 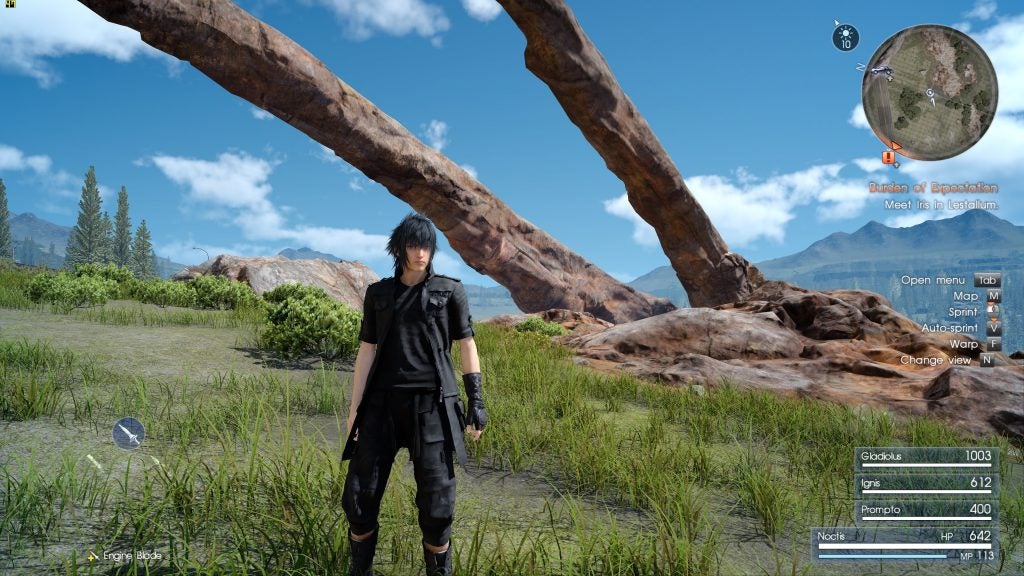 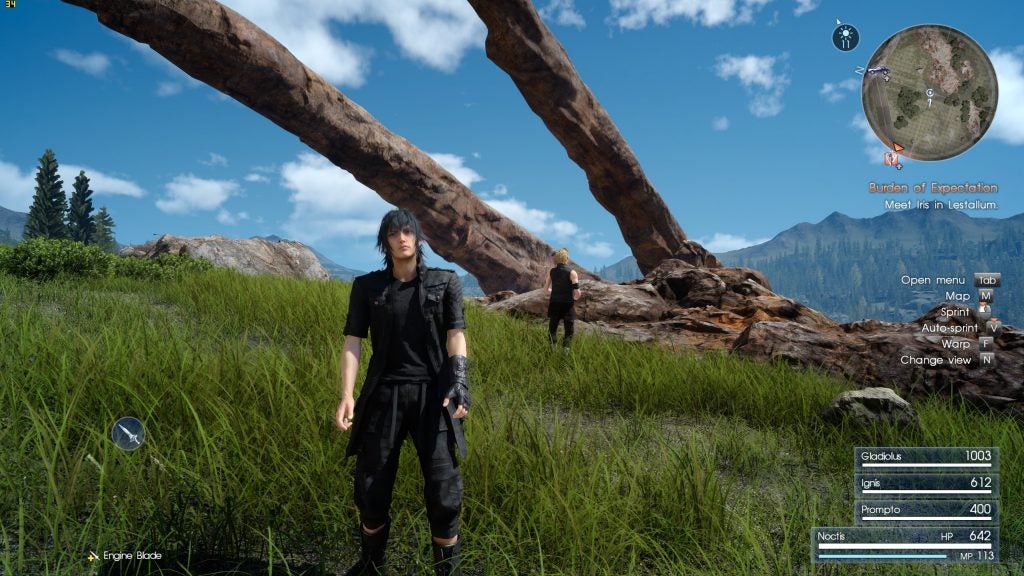 During a heated fight, or journey between missions where you’re moving fast, the effects aren’t immediately noticeable, but if you’re the type to take in the scenery they will be. The open plains are more populated, while city lighting is richer and has better shading throughout.

Looks aside, the improved framerate cap is another even more welcome addition. Unlike the console versions, Final Fantasy 15 Windows Edition has a maximum framerate of 120fps. Hardcore PC games who’ve invested in a super-expensive 144Hz monitor will bemoan the 120 cap, but to everyone else it’s a significant change that helps gameplay in a variety of ways.

First off, the higher framerate count makes the game generally feel smoother. But more importantly, the increased number of frames per second being rendered makes the control system, be it keyboard and mouse or controller, significantly more responsive, which makes the intense battles all the more fun. 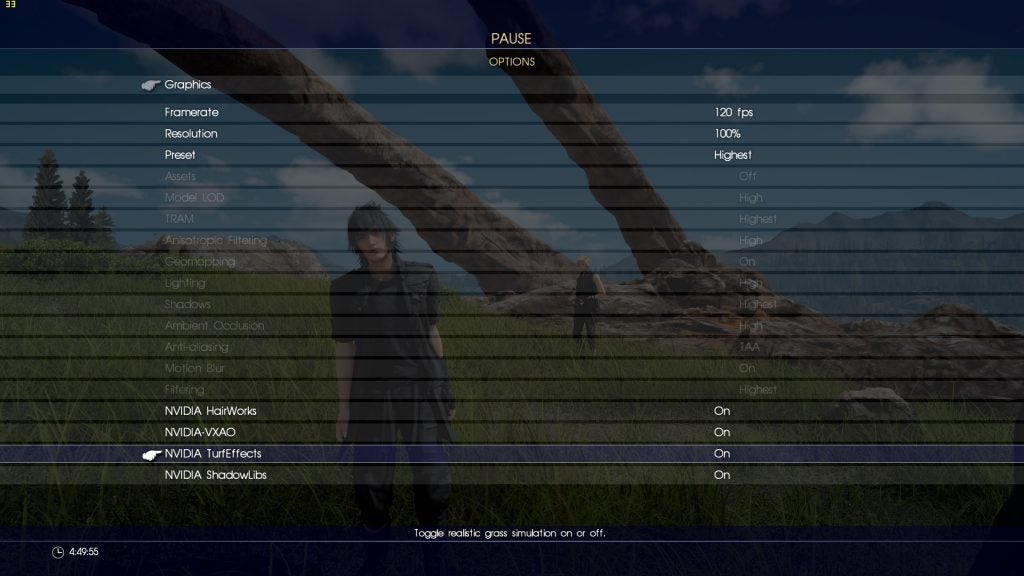 The kicker is that getting the increased framerate with the graphics maxed out at 4K is a nigh-impossible task.

With the game on Highest and advanced Nvidia options on the top-specced rig I could build – which included a GTX 1080 Ti, 16GB Corsair Vengeance 3000MHz DDR4 RAM and an 8th Gen Intel Core i7 8700K CPU – Final Fantasy 15 still couldn’t run at 60fps in 4K.

Instead it capped out at an average of 30-40fps while occasionally dropping lower during particularly heated segments. Even with the Nvidia extras off, the game still struggled to stick at 60fps in 4K and maintained an average of around 45fps.

Dropping to 1440p I found I could get a decent average above 60fps with the GTX GeForce 1080 Ti, GTX 1080 and even the GTX 1070 Ti. Though with the latter two there were times the framerate would fluctuate toward 30-45fps with the Nvidia settings on.

Editor’s note: Apologies to Ryzen users and people with insane i9 or Threadripper builds; our Ryzen CPUs were with another reviewer for a different set of tests. I’ll update this review with their performance when I get them back.

Final Fantasy 15 is far, far better optimised for 1080p, where it’ll run like a dream on most mid-level hardware using the game’s recommended specs, which you can see in the table below.

On my top-specced system the game ran excellently in 1080p on Highest. The Nvidia settings still chopped around 10-16fps off the framerate, but it never struggled to run at 60fps even with the 1070 Ti plugged in. In fact, in general I found it running at over 80fps with the 1070 Ti.

The game also ran excellently on two lower-specced rigs loaded with the below components:

On both versions the game works a treat in 1080p with the 1060. It ran smoothly at 40-60fps with the graphics set to Highest with the Nvidia extras off. The same was true when I swapped to the Ryzen 5 machine.

Turning all the Nvidia extras on, the framerate suffered massively and dropped below 30fps more often than I’d like. But I still managed to get 30-40fps, with just Hairworks or TurfEffects on, which isn’t to be sniffed at.

The only time I ran into real trouble was with the 1050. Though it could just about run the game with Middle settings, the frame rate wasn’t stellar until I dropped to 720p resolutions – which, let’s face it, no-one wants to do. But still, if that’s all you have, the game will at least be playable at this resolution.

Also, be warned, whatever resolution or setting you want to play at, Final Fantasy 15 will put a serious dent in your storage space. The base game will take up a giant 85GB. If you want to play at 4K you’ll also have to find a frankly ridiculous further 63GB for the free “High-Resolution Pack” that includes 4K textures.

The only element I’m not completely sold on is the mouse and keyboard controls. Fresh from the download pile the game comes with three button options for every action in the game (two for keyboard, one for mouse).

The flexibility makes it easy to control the game using the default key bindings and for the most part, the controls worked well. But frustratingly Square Enix has made it so you can’t ever display the mouse cursor in the game’s menu screens or main UI. This makes scrolling through the main menus or selecting a specific item or accessory in the game’s sub-menus fairly cumbersome.

What’s doubly damning is how frustrating it makes picking a location on the in-game map. Instead of simply being able to move the cursor to the specific location I want to travel to, or mark, the game forces you to scroll through each point, one-by-one. This makes the game’s mouse and keyboard controls feel a little like an afterthought rather than a properly implemented system. Hopefully the issue will be fixed with a patch in the near future. 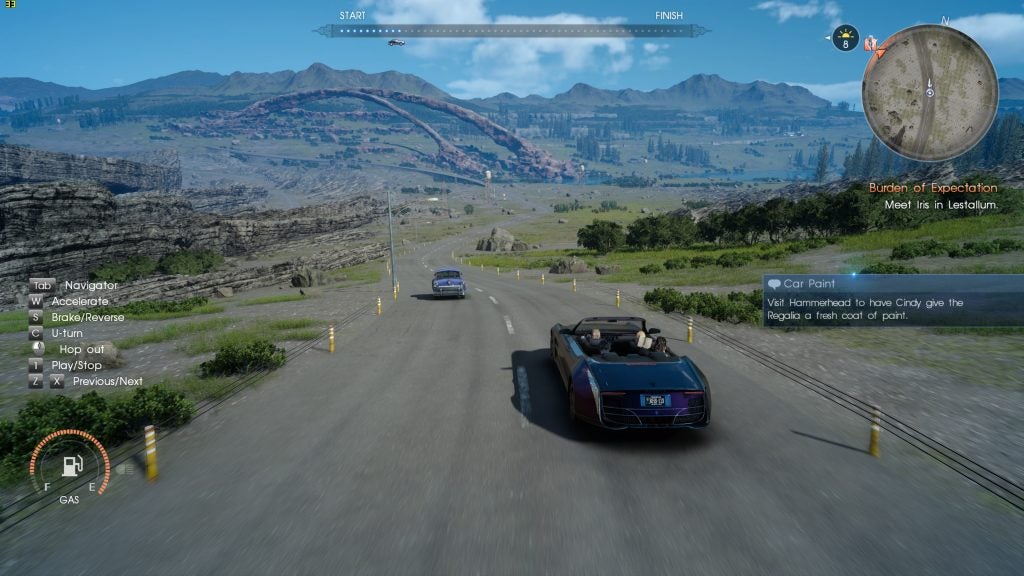 Even though it requires oodles of storage space and I’m yet to find a mix of parts that can run it at 60fps in 4K with the graphics cranked, I can’t help but be impressed with Final Fantasy 15 Windows Edition. Featuring all the charms of the console version, plus the DLC, customisable graphics and improved frame rates, Final Fantasy 15 Windows Edition is the best version of Square Enix’s latest epic that money can buy.