For those who take their portable music experience seriously, the FiiO M11 Pro offers a compelling and convincing sound. It isn't perfect, but at this price it's as good as you're going to get

Nowadays, any portable music player to enter the market will have its work cut out, with even half-decent smartphones capable of storing a few tunes, streaming, and sounding less than atrocious as they do so. So why would anyone want a FiiO M11 Pro?

The obvious answer, and one that Chinese specialist FiiO has been asserting for some time now, is sound quality. In this vein, FiiO’s M11 player is widely considered to be one of the very best sub-£500 units around, and now with the M11 Pro, the company wants to put even greater distance between its portable music players and the smartphone alternative.

If you’re the type of listener who takes their portable music experience seriously, then you’ll already be aware that the majority of smartphones don’t have what it takes to satisfy on that front.

Most smartphone audio offers a Deliveroo experience. FiiO is more interested in serving you up the à la carte option.

It isn’t easy to make a product feel purposeful and premium whilst maintaining a compact form. But FiiO succeeds in making the M11 Pro look and feel expensive while just about keeping it small and light enough for a pocket.

At 71 x 17 x 130mm (WDH) and 232g, it’s chunkier than many rivals. However, construction and build quality are impeccable, helping it appear like a slightly bloated smartphone.

That impression is only reinforced by the generous 5.2in edge-to-edge Gorilla glass touchscreen of the fascia. Its 1440 x 720 resolution keeps the display looking crisp, and it’s plenty bright and responsive enough. It wraps flawlessly into the FiiO’s aluminium frame, with the rear panel Gorilla glass too; horribly easy to damage – Gorilla glass is tough but not indestructible, as I have found to my cost before now – but beautifully tactile all the same. 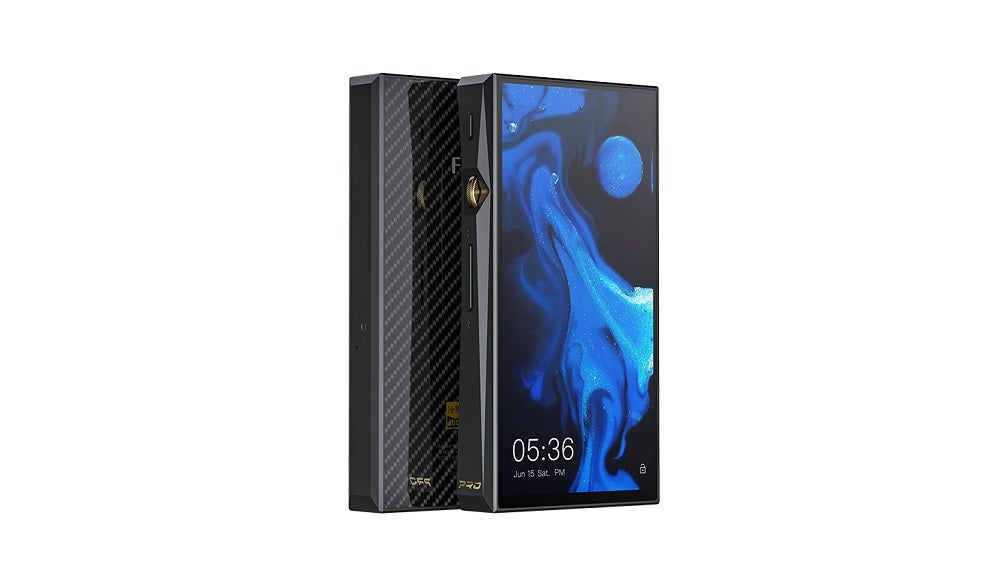 Physical controls are few; most interaction is via the touchscreen. But there are controls on the left-hand side, that sits almost flush to the frame, for “play/pause” and “skip forwards/backwards”, along with a volume control wheel. Along the top edge there’s a “power on/off” button surrounded by a light to let you know what the M11 Pro is up to, and on the right is a microSD card slot.

Along the bottom of the FiiO, you’ll find a USB-C socket for charging, and for using the player as a USB DAC. It’s joined by no fewer than three headphone outputs: the usual 3.5mm output (which also doubles as a digital coaxial output), plus 4.4mm and 2.5mm balanced outputs for more serious headphones. These go quite a lot further towards justifying the “Pro” part of the model name than the nasty ‘Pro’ badge stuck to one side of the player’s frame.

While the M11 Pro is an attractive device, it hardly justifies the hefty price tag. On the inside, though… it’s a different matter.

The FiiO is powered by a stout 4730mAh battery. It can be fully charged from flat in less than two and a half hours – but, despite its heft, it’s good for only an unremarkable 10 hours of playback time. The player’s internal memory is a chunky 64GB; that can be expanded by as much as a whopping 2TB if you buy an appropriate SD card. So, even though the Android 7.0 operating system takes up a good bit of memory, the FiiO can still store oodles of hi-res audio files.

All the heavy audio lifting is done by a pair of AKM’s AK4497EQ DACs – arranged in a dual-mono setup – and THX AAA amplification. Consequently, the M11 Pro is able to handle each and every digital audio file type up to its native 32bit/384kHz resolution. Even headphones of wilfully high impedance shouldn’t present any problems.

There are numerous options for getting the digital information into the FiiO in the first place. Numerous Bluetooth options are available, the most interesting include Sony’s LDAC algorithm and aptX HD, while DLNA and Apple AirPlay compatibility widen your options further. 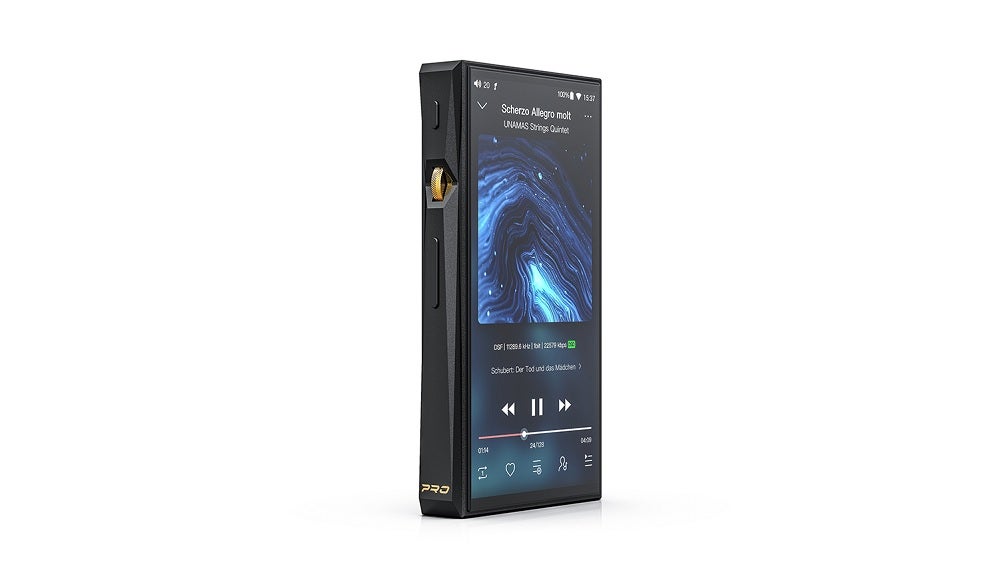 Dual-band Wi-Fi plus the Android 7.0 platform makes downloading and installing any or all of your favourite music streaming service apps swift and painless. At least, it’s swift and painless once you’ve mastered the vagaries of the APK Pure app store – the FiiO doesn’t support Google Play Store.

Any music stored on the device’s internal memory is played back by FiiO’s proprietary Music app unless you decide otherwise. By all means, try it out next to your favourite music player app – but I’d say that FiiO Music is logical, stable and sounds super-impressive.

Despite Android 7.0 being some distance from the cutting-edge, it proves more than capable of delivering a swift and seamless experience. And down in the depths of the M11 Pro’s menus, you’ll find a few options to provide even greater credence to the “Pro”. Engage the Pure Music setting, for instance, and only the FiiO Music app will be able to run. Or select All to DSD to convert all PCM audio files to DSD. This one is something of a double-edged sword, as I’ll explain below.

No product is absolutely perfect and, sure enough, the FiiO M11 Pro has a couple of areas in which it falls short of being absolutely top-class. But in virtually every aspect of music-making, it’s about as far removed from the smartphones it seeks to replace as a super-yacht is from a rowing boat.

A 24bit/192kHz file of Domino from Van Morrison’s His Band and the Street Choir is a suitably lush place to start, The FiiO wastes no time in establishing its credentials as a spacious, attentive and overarchingly musical listen. It’s absolutely on the money where rhythms and tempos are concerned; it never seems to be forcing any issues. It generates momentum without sacrificing anything by way of control.

This relative turn of speed isn’t to the detriment of detail or low-frequency presence, either. The bottom end is deep, loaded with information about texture and timbre, and hits as hard as the musicians intended. It doesn’t wallow, and it doesn’t bleed into the information above it and, above all, it doesn’t draw unwarranted attention to itself.

The opposite end of the frequency range is equally well managed. There’s proper substance to treble sounds, and no shortage of attack – but, again, the M11 Pro doesn’t overplay anything. It simply loads up on the details, controls the attack and decay of individual sounds zealously, and then gets out of the way. 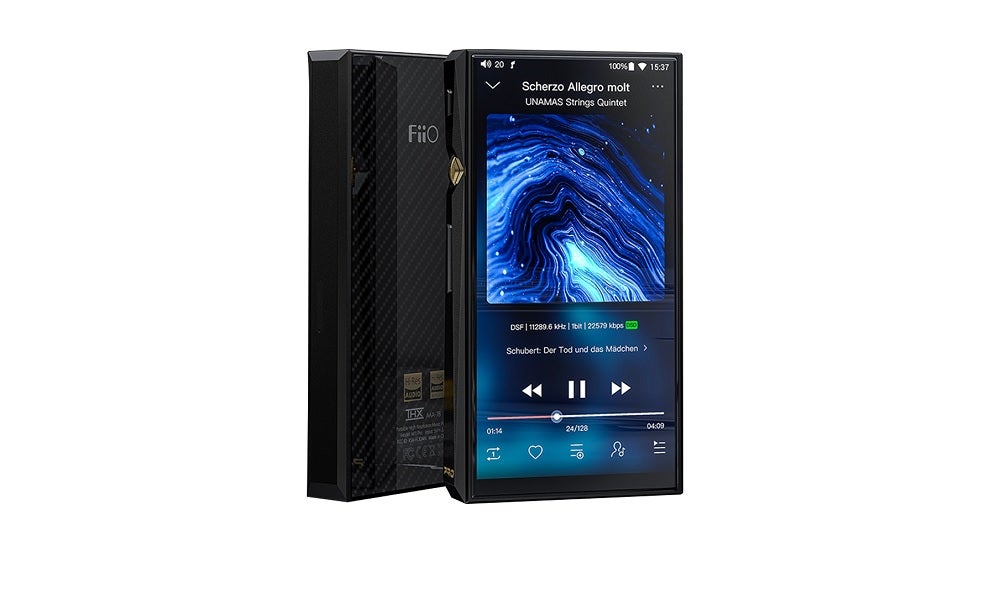 In between those two extremes, it preserves all the nuance and character in a singer’s voice. There’s an immediacy to the way the FiiO deals with vocals, and the sense of space that’s ever-present in its delivery allows voices to occupy their own well-defined area of the stage. Tonality is admirably neutral, and the M11 Pro handles both the minor harmonic variances and the more profound dynamic shifts in the recording with equal sympathy.

Switching to the altogether chunkier We Will Always Love You by The Avalanches and Blood Orange as a Tidal Masters file allows the FiiO to showcase its powers of analysis. This is a typically cut-and-paste recording, the joins there to be heard. However, while the M11 Pro makes them obvious, this level of scrutiny doesn’t come at the expense of the energy of the FiiO’s overall attitude. And it doesn’t affect the player’s facility for timing – even a patchwork recording such as this sounds unified.

It’s capable of kicking back if the music demands it, as a listen to Prince’s International Lover illustrates. In fact, the FiiO never sounds less than engaged by and sympathetic to whatever you choose to play.

It isn’t quite perfect. Although it describes a well-defined soundstage and locks every element of a recording firmly in position, it doesn’t generate the out-and-out scale of stage that some alternatives manage. And while engaging All to DSD serves to widen the sound a little, it impacts on the FiiO’s timing and its battery life.

But that’s it for the “demerits” column. In every other respect, the FiiO M11 Pro is pretty much ideal.

You should buy the FiiO M11 Pro if…

You shouldn’t buy the FiiO M11 Pro if…

Astell & Kern, for example, has a deeply impressive range of portable music players – of which some are ruinously expensive, and some have strange names. The A&norma SR15 springs to mind as a) similarly priced to the FiiO and b) being possessed of a particularly daft name. It doesn’t quite have the M11 Pro’s effortless musicality, though.