It’s safe to say that the FiiO E3 produced a bit of a stir amongst headphone enthusiasts when it emerged last summer. While there were headphone amps designed specifically for DAPs and PMPs, like the awesome Graham Slee Voyager, the E3 was a tiny, AAA battery powered marvel that you could pick up for under £10, and one which has a noticeable, positive effect on many combinations of DAP and headphone or earphone. Sure, you could get better quality from a home-built Cmoy amplifier (see A Fire in the Head for details), the E3 was smaller, lighter, cheaper and consistently good (the quality of a Cmoy, of course, being dependent on the expertise of its builder). The facts all won the tiny amp a tidy cult following all of its own.


Now the small Chinese company is back with what you might call the E3’s bigger brother. It’s more expensive, but also more polished – every inch a more grown up little amp. 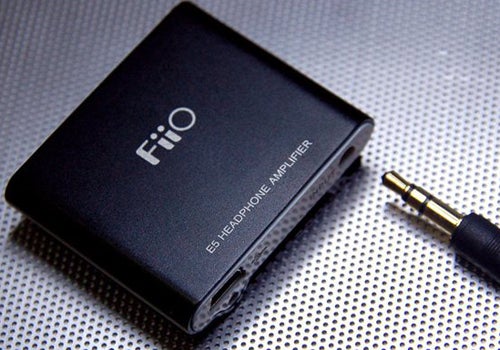 Let’s start with the physical design. To say that the E5 looks a lot like the last-generation iPod Shuffle is an understatement; it’s a bit squarer, but boasts a similar metallic construction, very familiar curves and the same metallic sprung clip. It’s light, but also tough. The overall feel is much more solid than the rather plasticky E3, and weight-wise there’s little in it once you take the E3’s AAA battery into account.


What’s more, where the E3 had an 3.5mm mini-jack input, a 3.5mm output and that was it, the E5 comes with actual, honest to goodness features, namely a power button, digital volume controls and a switch to flick between a flat, ‘clean’ sound and one with the bass taken up a notch. On top of this, the E5 has one other strong improvement: a built-in Lithium Ion battery, good for up to 20 hours of use. 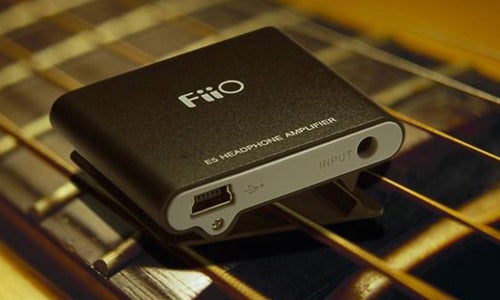 On the negative side, there is one area where FiiO could still pay a little more attention. The headphone output on your iPod, Walkman or alternative has to connect to the E5 through a 3.5mm to 3.5mm interconnect, and while it’s good to see two supplied this time around – one 15cm, one 80cm – the actual cable is thin, lightweight stuff, even if the plugs are now gold-plated. When you consider that the product’s being marketed to people who care about audio quality (albeit at the budget end) this is a minor embarrassment – but a forgiveable one given the low, low £20 asking price.


Still, in most respects this is one of the most practical and easily portable headphone amps around. Using the longer cable you can happily stuff your player in a pocket or your bag and clip on the E5, using it almost like a remote to control volume or mute the sound, and unlike most of the competition it’s so unobtrusive that you needn’t know it’s there. My one complaint? Unlike the E3, it doesn’t switch off when you remove your phones. If you don’t want to drain your battery while not in use, you need to remember to turn this little baby off.

Now, some of you might be wondering: why would I need a headphone amp? After all, don’t most DAPs and PMPs have enough power at their disposal to run most headphones without amplification, and isn’t it A VERY BAD THING to turn your headphones up too loud? Well, yes and no. First, depending on impedance and sensitivity, some headphones need more power than others to run at the same perceived volume level. Secondly, PMPs and DAPs vary in terms of output power, and size isn’t any indication. 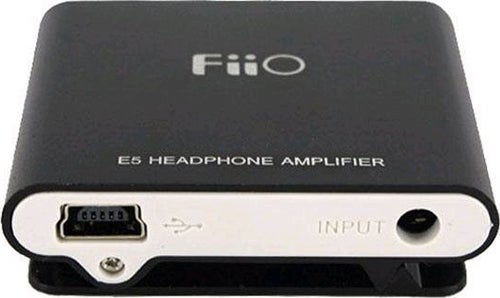 For instance, the Sansa Clip or Samsung YP-P3 pump out enough juice to get a big sound from most sensible pairs of headphones, but many Apple players, some Sony models and most iPod shuffle type players are a bit more restrained in their output.


Plug in some high-impedance in-ear ‘phones or a pair of over-the-ear cans and many players struggle to create a decent sound. The result is that you pump up the volume levels, pushing the amplification circuitry in your player too hard. The sound compresses, and you’re not really getting the full potential from either your headphones or your player. Keeping the volume levels on your player to a moderate setting and letting an outboard amplifier do the work can be a better idea. 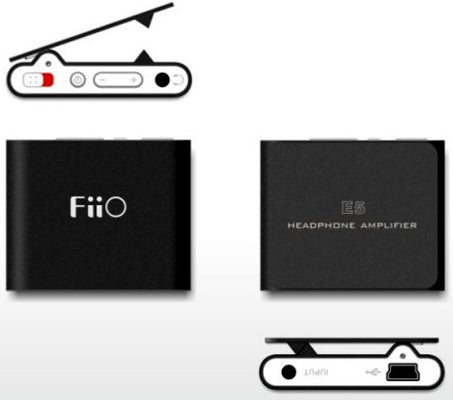 The knock-on effect of this is that the little FiiO can be a fantastic addition to your portable audio setup, though a lot depends on what player and headphones you are using. During the last few days I’ve tried it out on three different players – a first-gen iPod touch, a Samsung YP-Q1 and an iRiver T7 – with a bewildering variety of headphones.

In some cases the difference is blinding, in others only just perceptible once you take into account the fact that just increasing the volume often makes the sound better, and you can get a similar effect to plugging in the E5 just by raising the level from, say, halfway to two-thirds. Where the formula works, you get an increase in volume but also an increase in low-end warmth and clarity, and – unlike with the E3 – you can always switch the added bass on and off.


So where does it work? Well, I’ve always found the output from the iRiver T7 a little thin and weedy, so it’s no surprise to find the E5 working wonders there with most in-ear and over-the-ear headphones tried. Move on to the iPod touch and Samsung YP-P3, however, and things get trickier. I liked the way the E5 added body and some low-end drive to the sound emanating from a pair of Sennheiser PX100s, and there wasn’t any negative effect on clarity. Yet with a pair of iGrados, the effects weren’t so great: the sound became a little muddy and some background hiss – not obvious, but there – came into play. 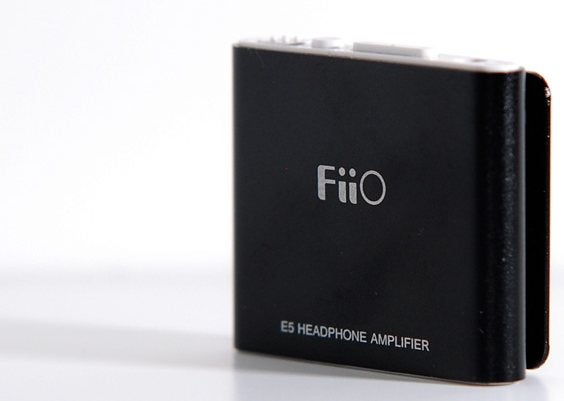 I expected similar things from the iGrado’s stable mates, the SR60s, but in fact there was another, albeit smaller improvement. This surprised me, because the 32 Ohm SR60s are easily sensitive enough to work from the touch without amplification, but with the E5 in play (and not anywhere near full volume) I could hit my preferred listening level at around the halfway mark on the touch, and the output seemed slightly cleaner and brighter, with a pleasant, rich tone in the mid and upper range. It’s not what you might call a night and day difference, but it’s there, and I had a similar experience with a pair of Audio Technica ATH-AD500s, with the added bonus that the slightly weak bass was thickened up.


With in-ear models results were mixed. With a set of Sennheiser CX300 Mark IIs there was definitely an improvement in terms of overall body, and I wouldn’t put this down entirely to the boost in volume, and the extra power also works with a set of Philips SHE9800s, albeit with lesser effects. However, with a set of Denon AH-C551s – canalphones which already triumph when it comes to warmth and power but fall short through a brash top end and slightly compromised definition – the E5 just makes the sound louder and a bit messier. Be warned: the headphone-level connection between player and amp can add noise, and depending on your headphones and the material you listen to, this can have degrading effects on your overall sound.

Of course, as with any headphone amplifier the E5 really comes into its own with headphones that are just too hard to drive for a player’s internal amplification circuitry alone. I’ve recently got my hands on a pair of AKG studio headphones rated at 55 ohms. While they’re exceptionally clean and detailed, even the beefy Samsung YP-P3 struggled to get maximum ‘oomph’ out of them.


With the E5 plugged in that all changes, and while the output might still be a little flat or even sterile for some tastes (these are studio ‘phones, after all), it’s much richer and more lively than it was, and the results with classical music are nigh on dazzling. If you’re struggling to drive high impedance cans like the Sennheiser HD5x5 series or earbuds like the Klipsch Image or Sleek Audio SA6, you might want to bear this in mind; the E5 can get you decent results, without putting a huge hole in your wallet. 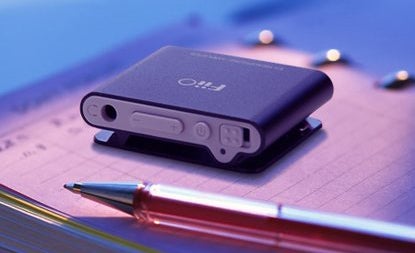 And this is where we come to my rule of thumb for the FiiO E5. If your current sound can be thin or brittle or even rather clinical, and you don’t want to change your player or your headphones, then this little beauty might just do the trick, if only through the bass boost function. If you already get a sound you’re happy with at between the 50 and 70 per cent volume mark, you still might get an improvement from the E5, but don’t expect any miracles.


If, however, you’re pushing the volume on your player beyond the 65 to 70 per cent mark just in order to get a decent sound, then the E5 is probably the most cost practical and cost effective way you might find of reaching your setup’s full potential. You won’t get the same audio quality you’d expect from, say, the Graham Slee Voyager or even a really good Cmoy amp, but then you’re not paying £150 for audiophile gear, but getting something you can clip on your jacket that costs less than twenty quid. Even if you only want to use it on the road, that makes the E5 one of the best bargains I’ve seen so far this year.


Solid audio output for such a ludicrously cheap headphone amp. While your mileage will vary depending on your DAP/PMP and ‘phones, it’s well worth giving the E5 a try if you find your existing setup lacks power.