Headphone amps are still considered the preserve of audio nutters by many, the music equivalent of people willing to spend hundreds of pounds on HDMI cables and special power plugs that remove midichloreans from the signal. Or something. Fiio is here to change all that with products like the Fiio E17. It’s a portable headphone amp and Digital to Analogue Converter (DAC) that can also act as a computer sound card. And it costs less than a hundred pounds.

Design
Although fairly low-cost, the Fiio E17 is built to last. Its bod is made up of three main metal sections – a slab each for the front and back and a single strip that curves all the way round the edges. All decked out in the same black, brushed finish, the E17 looks and feels great. 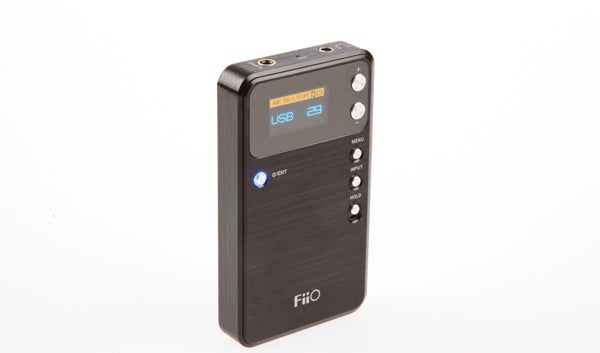 It’s extremely solid – and while the finish won’t look so impressive if it gets scratched, we can’t see it biting the dust unless you treat it with real harshness. A little bit smaller and thicker than an iPod Classic, people are bound to assume it’s an MP3 player – it’s much smaller than virtually all desktop amps.

It isn’t an MP3 player, though. While there’s a menu layer and some sound customisation on offer, the Fiio E17 wouldn’t know what to do with an MP3 file – and has no place to put them anyway, with no accessible internal memory.

Inputs
The Fiio E17 accepts four types of input. There’s a miniUSB port on its bottom, letting you connect to a computer and effectively use the little metal box as a sound card, a 3.5mm jack for standard stereo analogue input and an SPDIF jack up top for optical/coaxial digital entry. On its underside the E17 also features a Fiio dock socket, which plugs into the E9 – a Fiio desktop amp. Doing so blocks the USB socket, but the E9 has its own, making this potentially the perfect pairing. 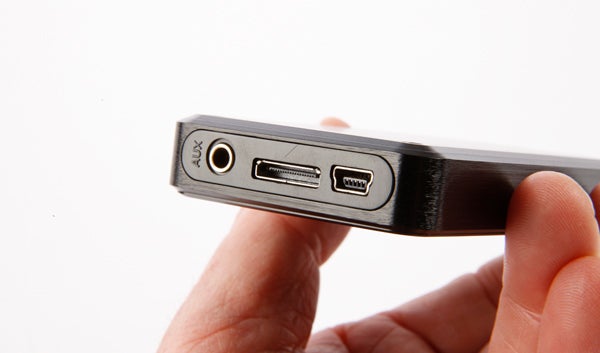 To make full use of the E17, you’ll need to use the digital inputs, but the flexibility of the device makes it worthwhile when used with a portable media player too. We hooked it up to an iPod Classic using Fiio’s LOD cable, which bypasses the Classic’s own headphone circuitry, and found it works well as a portable headphone amp – if not quite as convenient as something like the lesser Fiio E6. The E17 has an internal 1500mAh battery, letting you take it out and about with you. 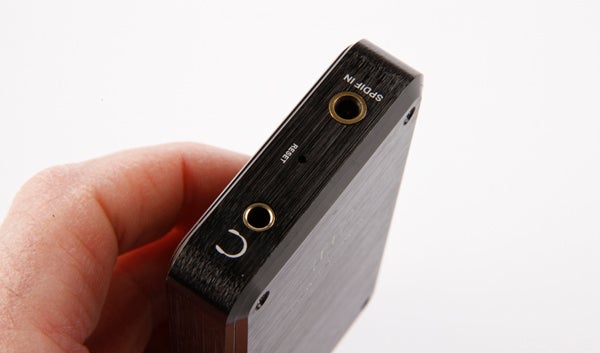 Specs
This isn’t Fiio’s first take on the portable DAC-plus-amp combo, though. The E17 is remarkably similar in most respects to last year’s E7. They’re of similar size, claim to be able to take on headphones of 16-300Ohm impedance and have similar screens. However, the E17 is much more powerful. 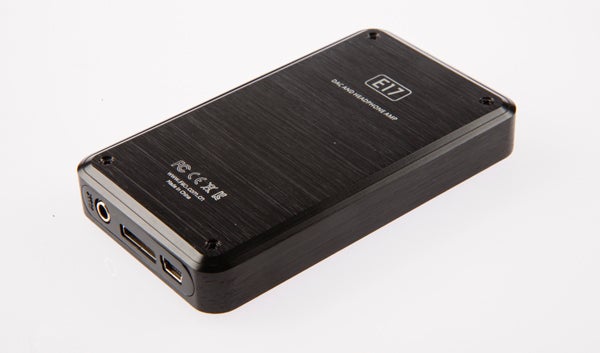 The positive aspect of this is much-improved output. At 300Ohm impedance, the E17 outputs 30 mW, where the E7 manages just 16mW. Fiio also says that overall performance is much better. The price is battery life.

The E7 has a 1050mAh battery that lasts up to 80 hours off a charge. The E17 has a larger 1500mAh battery that lasts just 15 hours, max. In normal use, you can expect to get around 6-8 hours out of it – significantly less than the claimed figure. This makes the new model much less convenient, but if sound quality is all you care about, maybe that won’t be a problem. 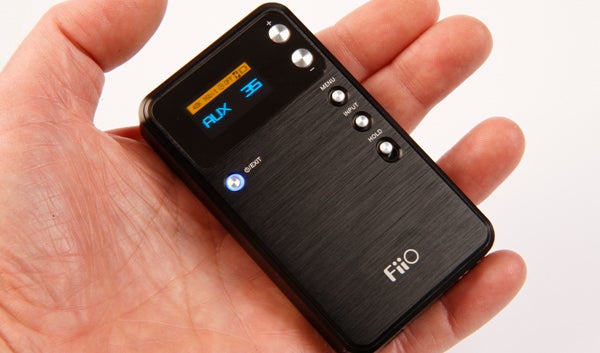 Used with an SPDIF connection, the Fiio E17 can accept a true high-end signal – up to 24-bit, 192k. Rarely do we have to crack out such high-end files in our testing. With a USB connection, the limit is 96K/24-bit – but if you’re honestly noticing all that much difference between the two, there’s a good chance it’s in your head. If you’re not so obsessed with bits and kHz, the E17 is also more than happy to take on “standard” 48K 16-bit signals. The quality of the signal being piped through it is displayed on the dinky screen on the front.

It’s a simple, two-tone display, but is very clear and more-than up to the task of displaying the basic info involved – there’s no need for album art here, folks. The screen is of the OLED type, which provides excellent contrast and viewing angles.

Accessories
The Fiio E17 comes with everything you need to get going. There’s a short stereo jack connector, letting you plug in an MP3 player easily, a little miniUSB cable and a felt carry case. You’ll ideally want to get hold of a digital cable too, but we can understand why Fiio hasn’t included one. Other than the costs involved, the length of digital cable needed is likely to vary much more – if, say, you want to plug it into a Hi-Fi separate halfway across the room. 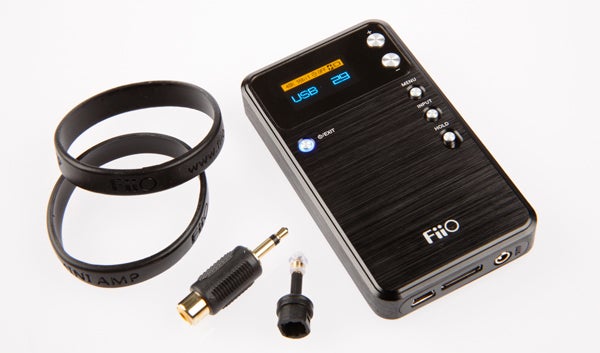 Other little bits bundled include some thick rubber bands, to let you attach he E17 to your media player in lo-fi fashion, and optical/coaxial converters.

Use with a computer
Using the Fiio E17 with a computer is simple. Plug it in using a miniUSB cable and the two will start talking to each other, the E17 automatically taking over as an audio interface for the computer. No specific drivers need to be installed manually either, which makes the whole thing painless. 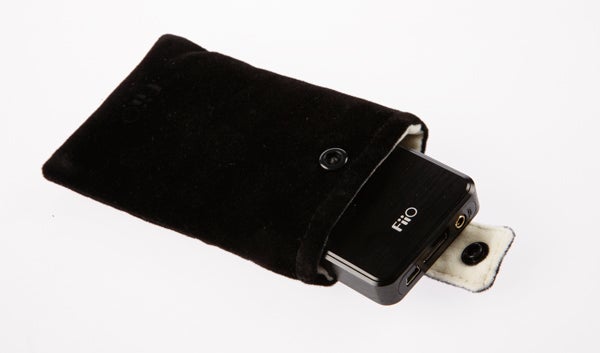 There are, naturally, still benefits to having a high-end soundcard rather than a USB DAC like this, though. Without a digital audio output, it’s not much use if you want to occasionally connect to a surround system rather than headphones. The E17 is designed for stereo audio, not 7.1. It also has no analogue-to-digital converter (ADC), so is no good if you want to record musical instruments, or other sources, using your computer.

Sound quality and volume improvement
We have dubbed the Fiio E17 “flexible”, but it’s within fairly narrow constraints. Where it excels beyond the capabilities of most soundcards is in its headphone amp part. However, if the sound output from your computer sounds poor – and it’s not down to your using 128kbps MP3s for your music collection – the E17 will increase audio fidelity significantly. 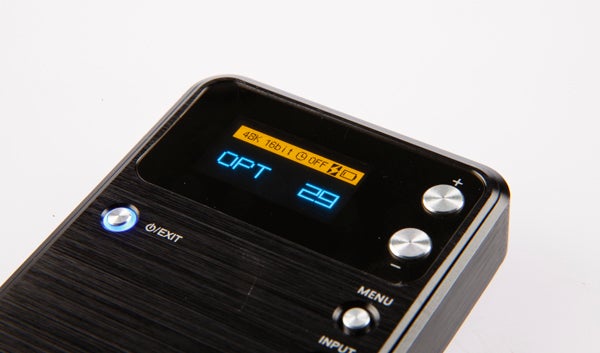 The headphones that benefit most from the E17’s help are higher impedance sets designed for studio or home use, rather than earbuds not particularly meant for use with an amp.

The Fiio E17’s effect on the sound is pretty neutral – it doesn’t up-end the sound with oodles of additional warmth (the Fiio E6 adds more warmth if that is your bag) but it can seriously improve audio fidelity paired with the right set. In particular, it resolves the mid-range extremely well – smooth but well-defined in a manner that increases the soundstage size. We found it also tended to tighten-up the low-end a little, lending it greater impact and power, and helps to shave off errant top-end sharpness. 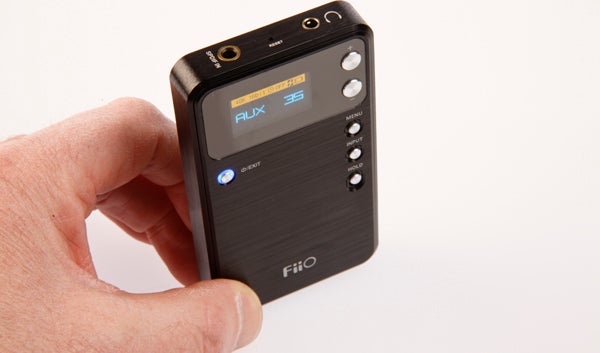 Stepping back from the minutiae of the sound, the E17 helps to smooth-out sound a little, without losing any definition or detail. It can also make headphones sound that bit more expansive. The only possible complaint we have is that the smoothed-out treble can seem like a step back with earphones that don’t have enough treble presence as-is.

EQ and sound customisation
If you want to sculpt the sound output of your headphones a little more proactively, the Fiio E17 also offers some basic equalisation settings. However, they’re not particularly impressive in scope. 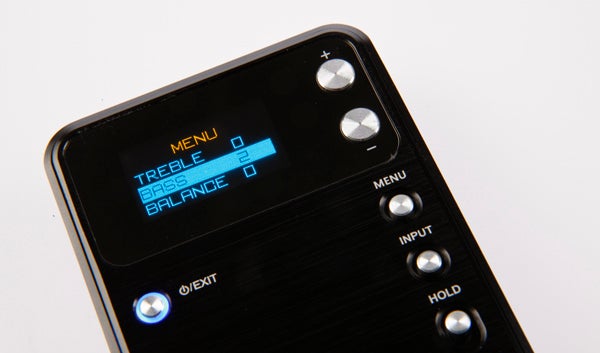 Bass and treble can be tweaked – up or down – but you have no control over whereabouts in the frequency spectrum each does its thing. If advanced control over music playback is what you’re after, you’d be better off with something like the Cowon J3 and its JetEffect 3.0 engine.

Within the same menu, gain and channel balance can also be fiddled with. There are three gain settings – 0dB, 6dB and 12dB. Higher gain settings tend to relay tunes with a little more impact, but you won’t need to use them for volume alone. With such power on tap, the E17 will easily blow most eardrums at the max volume of the 0dB setting.

Value
In the audio world, the Fiio E17 seems like a bargain. When DACs and headphone amps spiral into thousand-pound territory with ease, getting such a capable solution for around £100 seems like a small miracle. However, we do wonder how many people out there would be perfectly happy with the E7 – at half the price – or even the cheapo E6, which loses the DAC, functioning as a basic, low-power headphone amp. 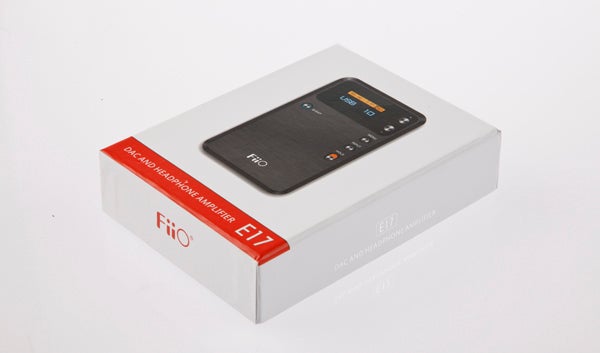 However, if you have genuinely demanding headphones, the Fiio E17 has a significant impact on sound that may even surprise the nay sayers out there.

Powerful, portable and with an unmistakeably positive effect on the sound of slightly harder-to-drive headphones and the poor-quality output of some computers, the Fiio E17’s worth is indisputable. It’s also well-made and pretty versatile, capable of plugging into three sources at once. It is a worthwhile upgrade over the E7, though equally we suspect many of you may be happy with that device at half the price.