Available on Xbox 360, PS3 (reviewed)
Something strange appears to be happening at EA Sports: a brand so many gamers associate with play it safe, by the numbers annual updates is suddenly taking risks. While the predictable 2013 versions of Tiger Woods, NBA, NHL, Madden NFL , FIFA and the rest are still doubtless on the way, we now have our second attempt in a month at rebooting a franchise, and here the thinking is every bit as fresh and innovative as it was with the excellent SSX. 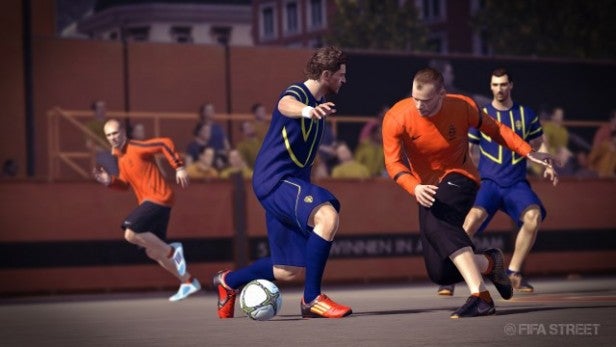 You see, FIFA Street has finally stopped trying to be an arcade FIFA. It’s ditched the simplified gameplay, the cartoon graphics, the overblown effects and the crazy special moves of previous versions. Instead, it’s something close to a simulation of how football is played outside the monster stadiums and giant arenas, in small towns and big cities around the world. Admittedly, the players are a lot more skilful than your average Sunday five-a-side champ, but this is football at a level we can all relate to.

FIFA Street runs on a modified version of the FIFA 12 engine, but the general look and feel is both familiar and different. The locations are tarmac courts, car parks, sports halls, outdoor courts and rooftops, the players dressed in tracksuit tops, T-shirts, shorts and trainers. With walls on each side and no referees play goes on almost regardless of what happens, making for a faster game with fewer interruptions. And if conventional FIFA is about building up waves of attack to create opportunities, then FIFA Street is a smaller, tighter game, heavier on reflexes and ball skills than on open play and strategy. It’s a game that demands close attention. 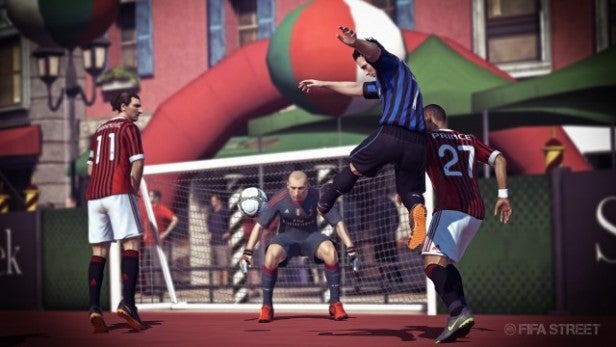 The difference exhibits itself In the controls. You’ll still run, pass and shoot in FIFA Street, but you also spend a lot of time using the new ‘Street Ball Control’ system to move the ball around your body, the R1 button/right bumper to juggle the ball in the air, and the right analogue stick to trigger a range of special trick moves designed to make you look good and the guy marking you look stupid. Sliding tackles are out of the window, and now defence is much more about close marking – to the point of harassment – and well-timed interceptions. Don’t have the ball? Grind your opponent down until you do. Have the ball? Lure them in, make a break, and make the most of every opportunity.

Were it just a straight five-a-side game, there’s a chance that FIFA Street might get old fairly quickly, but EA Sports has been smart here, setting up matches in a variety of game styles. There are incredible tense two-on-two Panna games, where you earn extra points by beating an opponent in the air or on the ground or by kicking the ball through their legs, and bank them when you score. It’s not just about getting the ball into a pint-sized net, but about humiliating the competition while you’re at it. There are similar three-a-side freestyle games, where tricks turn into points and points go on the scoreboard every time you score. 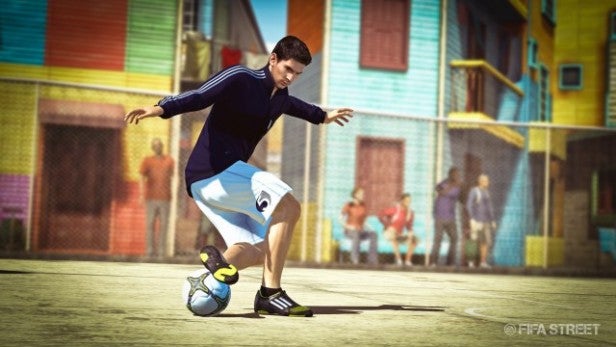 There are Last-Man-Standing games, where with each goal scored you lose a player, and the winner is the first team to lose their last man. There are Futsal games, where the sidelines and touchlines reappear and the goals get bigger, taking FIFA Street as near as it gets to standard FIFA. Each variant has its own particular feel, and you’ll end up loving some and – maybe – hating others. Either way, the game keeps feeling fresh and exciting.

Meanwhile, the soundtrack is a huge part of the atmosphere. There’s no commentary or crowd noise, just a background of hip-hop, grime and dubstep with a touch of rock, trance and samba, and the shouts of other players. It won’t be long until you’ve heard all the samples, but the effect is still very convincing. Even when you’re watching Rooney take on Gerard, playing Panna in a grimey car park, FIFA Street has one foot in a gritty urban landscape – albeit one that’s been carefully constructed to appeal to ‘the kids’. 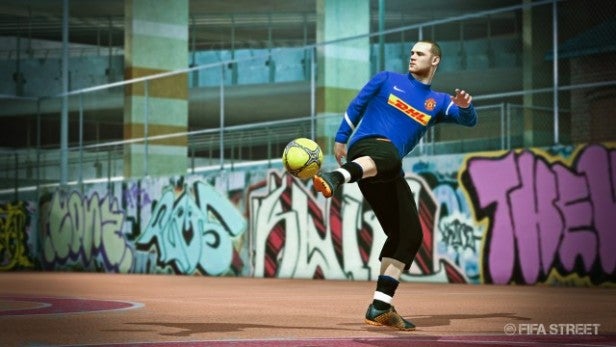 Some of us are a decade or two old for that demographic, but we’d still say that FIFA Street is brilliant fun to play. By tearing up the rulebook EA Sports has created a footie game that actually feels new and unpredictable, and while the learning curve can be tough at times, there’s something about juggling the ball in the air as you dribble before planting it in a crowded goal, or dancing the ball around the pitch in a flurry of exuberant back-heel and overhead passes before scoring a decisive point. It’s hideously addictive too, even played as a single-player game. Sure, you’ll see some AI or ball physics issues, but nothing really awful. And don’t we all know players who seem scared to close the opposition down, or who regularly pass to the wrong man? 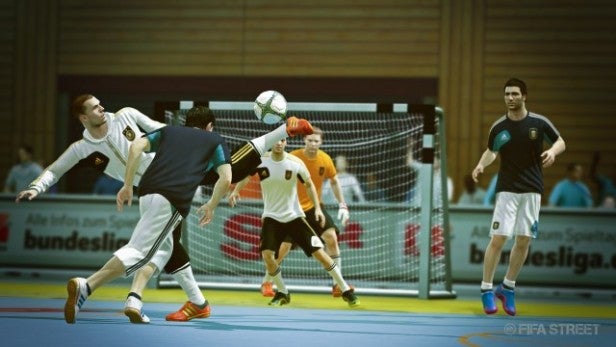 If FIFA Street has any issues it’s that, compared to other EA Sports game, it feels a little short on options. You can play with big name teams and players, but only in single exhibition matches. The real meat is in the main career mode, which takes your carefully created team from local five-a-side matches through to national tournaments, and from there to playing with the best street football players in the world. There’s a nice RPG element in levelling-up and upgrading your captain and your squad-mates, while winning matches will unlock new perks and garments, and some beaten players may defect to your squad. It’s great fun, and we love the way the difficulty level grows in line with your skills, so that you’re constantly being challenged to play more skilfully and with more flair. All the same, there’s a slight feeling – and only a slight one – of “is that it?” 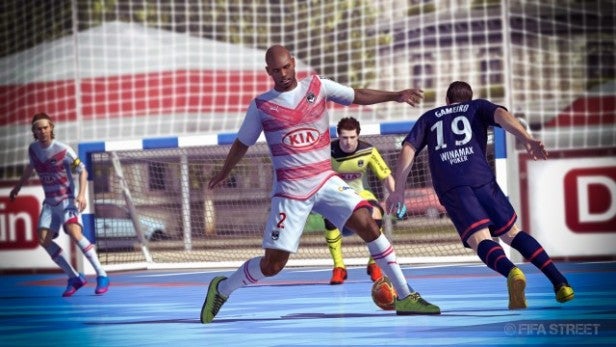 Maybe not. It’s difficult to tell at this stage, but with EA promising online tournaments, the ability to download ghost teams and players from mates and a range of other multiplayer goodies, there’s plenty of room for FIFA Street to grow. Certainly what games we have had have been smooth and lag-free. Nor should we forget that this is, at heart, a game best played against friends, preferably within the same four walls. For sheer show-off action and skilful humiliation of your chums, FIFA Street will take some beating.

Verdict
A surprisingly successful reinvention. With the new FIFA Street EA hasn’t just created a decent offshoot of the series, but an enjoyable counterpoint that some players might actually prefer. FIFA Street is fresh, fast-paced and exhilarating, and hopefully a sign of things to come.