Introduction
Critically and commercially, FIFA now dominates video games football yet every year there’s a feeling that this might be the year EA Sports slips up. It wouldn’t take much – just a lazy update short on tangible improvements or some killer new game mechanic that ends up spoiling the game. Last year’s effort, FIFA 12, sailed close to the second scenario at times, its revamped defensive systems and player interactions coming close to disrupting the flow of play. Yet this also made the game feel more authentic, and for most of us that was enough.

Well, FIFA 13 isn’t the game to wreck FIFA’s upwards momentum. Its new features might seem small – and some are undeniably gimmicky – but they cement FIFA’s status as the world’s best football game both on and off the pitch. Sorry Konami and the valiant efforts of PES 2013. 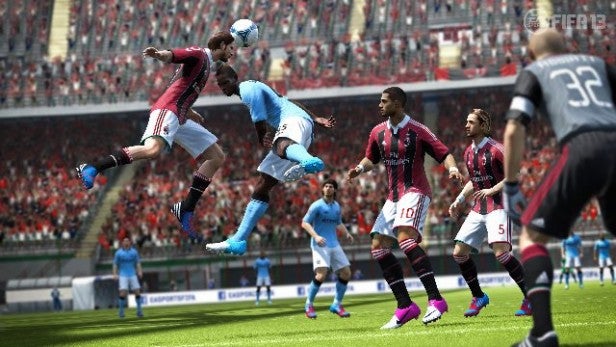 FIFA 13 Kinect and Move
Let’s tackle the gimmicks straight away. FIFA 13 is the first of the FIFA franchise to embrace the Xbox 360 and PS3’s motion control peripherals, with Microsoft Kinect and PlayStation Move support bundled in. Oddly, only Move gets motion controls as such, with an optional control scheme modelled on the system FIFA adopted on the Wii. The left analogue stick (or navigation controller) still handles player movement while passes, lobs and shots are mapped to the face buttons on the move controller. However, you now have a cursor you aim by pointing the move controller at the screen, and this affects the direction and power of your shots and passes.

It’s actually a perfectly good system, but not particularly intuitive, and using it can impact the tightness and precision of FIFA’s play. We suspect that the Move controls will be no less divisive here than they have been in Sony’s first-party FPS games – you’re either going to love it or you won’t. 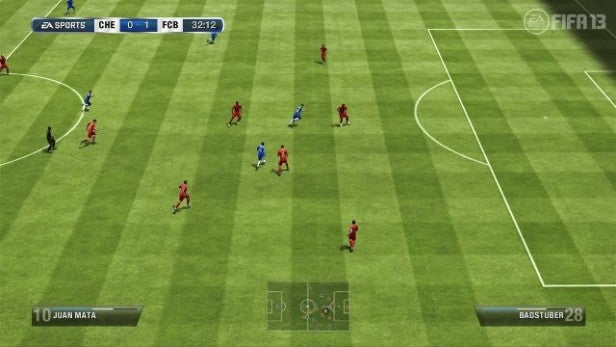 The Kinect control scheme wisely avoids the horrors of motion-controlled passing and shooting for voice commands that augment the pad-based gameplay, bringing options once buried in pause menus into the flow of the action. Shout ‘Quick Tactics’ or ‘Mentality’ for example, and you can pick between combinations of formations, strategies and attitudes, or set the team to focus on attack or defence.

You can call out substitutions, create your own custom tactical combos, and FIFA even goes so far as to watch your language for offensive words and tweak the officials so that they’ll come down harder on your misdemeanours. The message is clear; don’t suggest that the referee indulges in unseemly and solitary habits unless you want to see how much of a, you know what, he can be. Accuracy of recognition is very good, and helpful pop-ups remind you of the different options, but we’d have to say that the impact of swearing seems limited in practice. Perhaps EA could go further to punish potty mouths. 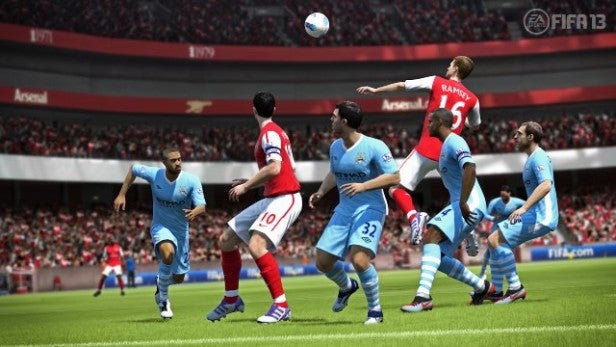 FIFA 13 Game Modes
Beyond this, there are extensions to the online and offline play modes we saw last time, to the extent that we’re beginning to think FIFA needs a tutorial just to make it through the menu system. As in FIFA 12, you sign up for your favourite club when you first play, and the game keeps a tally of experience gained in both online and offline play, adding the points to the club’s overall pot and ranking the teams by their average score. The ‘Be a Pro’ and ‘Management’ career modes return, and there’s certainly long-term satisfaction to be had in taking your own player through the system, going out on loan to smaller clubs and trying to hold your place within a Premiership team. You can opt to play just as your player, or control the whole team during matches.

Online, there’s even more effort to tie FIFA 13 into the community and into the world of real football. As well as Ultimate Team’s cunning combination of FIFA action with Fantasy Football – now more accessible thanks to interface changes and new tutorials – and challenges in EA football club, FIFA 13 introduces a Game of the Week, giving you the chance to try one of last weekend’s big encounters with the same teams and conditions. It’s impossible to evaluate these things before release, but those who’ve made FIFA 12 one of the online fixtures of their lives should find plenty of reason to make the upgrade.

One casualty of FIFA’s drive for authenticity has been accessibility. Simplified ‘dad’s’ control schemes and smart use of the analogue pads have helped, but FIFA has become a game where a lot of the more sophisticated aspects of the gameplay seem buried unless you have the time and energy to master all the combinations of pad, face-button and trigger. 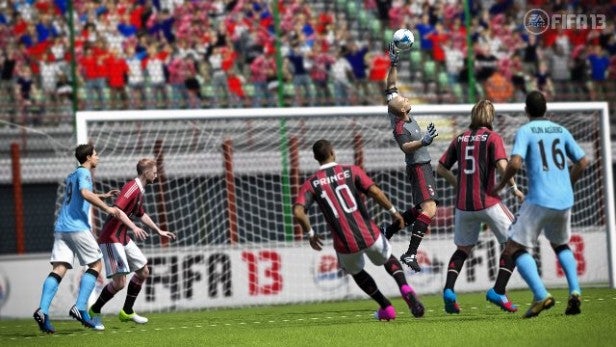 To get around this, FIFA introduces a selection of skill games, which can be played on their own or sampled while you’re waiting for a match to begin. It’s all simple stuff – sending balls over barrels, slaloming around cones or hitting targets – but surprisingly addictive, and all the time you’re learning tricks and techniques that you can apply when taking your pro towards the next final, or giving mates a drubbing on a slow Sunday night.

FIFA 13 Gameplay
All of this is great, but what really makes FIFA 13 so stunning is how it looks, plays and sounds on the pitch. The TV-style presentation is even better than on the already strong FIFA 12. Player models still look like they’re ready to camp out in the uncanny valley during close-up shots, but in movement the detail is impressive, capturing the full horror of the Premiership’s worst haircuts and the gait and motion of key players. 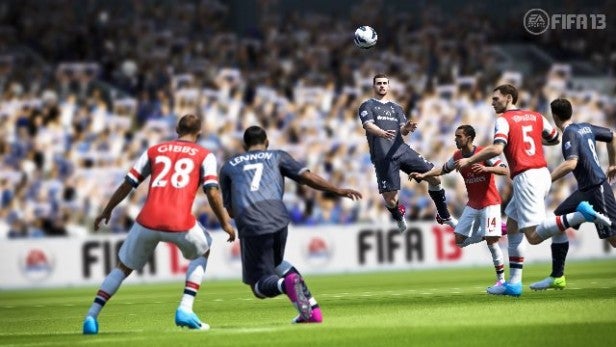 The commentary is the best it’s ever been, with Martin Tyler and Alan Smith, abetted by Clive Tyldesley and Andy Townsend commenting fluently on the in-game action, tracking your performance across matches, and even making references to individual team’s grounds, track record, history and supporters. Of course, the more you play the more the repetition creeps in and the more you see the smoke and mirrors, but you can’t fault FIFA 13 for matchday atmosphere.

Nor can we find much to complain about in terms of gameplay. Since last year’s FIFA the team has gone to work tweaking the Impact Engine’s player interactions, dribbling and – particularly – the attacking AI, while adding a new First Touch Control mechanic that changes how players take hold of and control the ball on contact. It’s apparently based on the situation and the player involved, and the idea has clearly been to make the action less predictable but still enjoyable and believable. 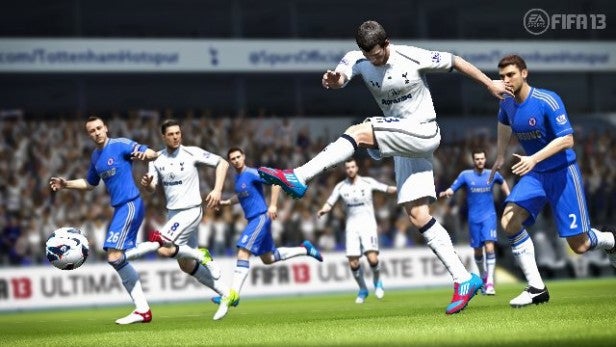 It works. In fact, it all works. It’s not that FIFA 13 is faultless, or that you won’t ever be mystified by poor AI calls or bogged down by grinding midfield play. You’ll still find the occasional goalie perplexed by a painfully obvious shot, or great plays blocked by a superhuman keeper. Even the Impact Engine throws up a rare glitch now and then. Yet 99% of the time FIFA 13 just plays better. There’s more of a flow to the action on the pitch, more excitement as attacks build, climax or peter out, and simply more entertainment. FIFA 13 hasn’t lost the gritty, real football feel of FIFA 12, but is plays a more lively and action-packed game,

Verdict
Nobody could argue that FIFA 13 isn’t a radical improvement on FIFA 12, but it’s the perfect example of how an evolutionary approach, with dozens of often minor enhancements stacking up, can make a great game even greater. Some enhancements are marginal and the Kinect and Move features are just gravy, but the tweaked mechanics and the new skill games ensure that this year’s FIFA looks and plays better than any other soccer game this generation. Sorry Konami and the valiant PES 2013 offering.