Time was when admitting a love for EA’s FIFA series was akin to a horrific social faux pas, like unknowingly chatting up your mate’s sister or walking out of the toilet undone and hanging out. It was bad news and would generally secure a reputation for being either: a) weird b) stupid or worse still just “a bit special”. Why? Because, compared to Konami’s deep and frenetic competitor, FIFA was shallow, gimmicky and ponderous. However, much to the developer’s credit, FIFA 07 marked a significant step forward for the series. Finally, after many a year of bizarre new control schemes, here was a game that was comfortable concentrating on being just one thing: a really good football game. 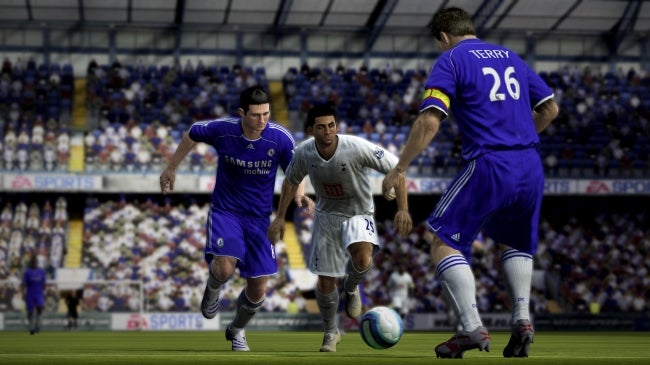 So, what about this year’s attempt, the imaginatively titled FIFA 08? Dealing with the bleeding obvious first, FIFA 08 is just as polished and beautifully presented as it has ever been. Menus, music, shiny bits: FIFA 08 has it all. Of course, it also has the ever alluring licenses to fall back upon and in terms of the sheer number of players, teams and stadiums available, FIFA remains the daddy. Moreover, despite what the more snobbish among us might suggest, this is an important part of the allure and FIFA 08 represents the best visual interpretation of the game we’ve yet seen.


Most notable in this respect are the player animations. Over the years we’ve become pretty accustomed to ever improving animation, but FIFA 08 takes expectations and extends them even further. Players shield and manoeuvre the ball with increasing ease, bringing the ball down and under control smoothly and seamlessly. As ever there’s a bewildering array of skills to master too, all animated with great flair and accuracy. Accompanying this are the truly excellent ball physics, which were a particular highlight of last years effort. More than before the ball feels like its own independent spirit, ricocheting unexpectedly and making for a more believable and at times unpredictable game. 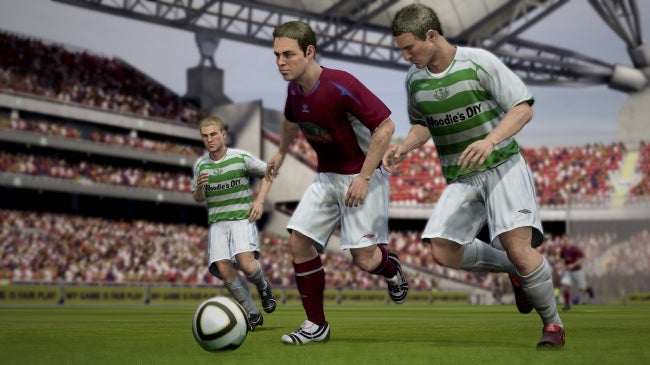 Another important facet of any FIFA title is the player likeliness’s. Beginning with the good, the extra detail provided by playing the game at full 1080p on a large TV means it’s easier than ever to pick out players merely by appearance. Be it the broad shoulders of Wayne Rooney or Sheffield Wednesday’s silver haired warrior Graham Kavanagh, most players are easily identifiable so long as you know what they look like to begin with.


Oddly, however, move up close and a large majority look distinctly chunky. We’re not just talking Rooney, Adriano or Fat Frank here, even the likes of Ronaldinho suffer the chunky treatment, looking as though he ought to be standing outside a club bouncing people to the curb. It’s not a fatal issue and given time one tends to tune out the initial shock, but it’s a strange development nonetheless.

This leads us quite nicely onto how FIFA 08 plays, with one of the early abiding impressions being how hard it actually is to get around people. Be it because players are more rotund or not, the act of running past players in FIFA 08 is surprisingly difficult. Indeed, because of this the endless trickery available to you is ultimately pointless. Power, rather than skill, is the name of the game in FIFA 08. This means the likes of Rooney, Lampard, Gerrard and other powerful attacking players are far more effective than say a Scholes or a Deco, who get pushed off the ball far too easily. 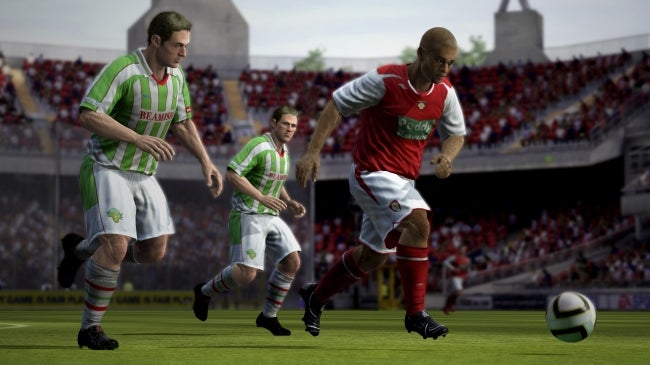 Another aspect of this problem is lack of pace in the game. With the exception of the likes of Robben and Ronaldo, even quick players don’t seem all that fast. In some respects this helps balance the gameplay, ensuring that fast players don’t completely dominate. However, a cursory glance at modern football will show you exactly how important pace is to success. Compare, for example, the Duff and Robben powered Chelsea of two years ago to that of last season, and the difference is obvious.


If anything, though, it isn’t a lack of pace that’s the problem: it’s a lack of acceleration. What’s actually missing is that initial burst that allows players to find space and play, replaced by an endless number of shoulder-to-shoulder tussles that are invariably weighted in the defenders’ favour. 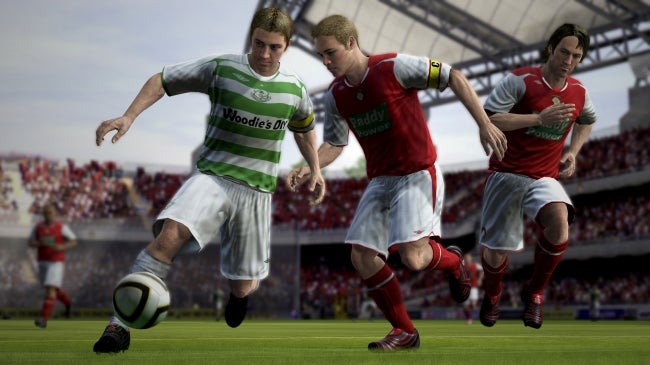 Since getting past players individually is so difficult, there’s more emphasis on passing and building from the back or, as a coach might put it, letting the ball do the work. In many respects this requires a great deal more skill and understanding than charging up and down the pitch, rewarding genuine skill and intelligence rather than blind luck. FIFA 08 is deliberate, strategic and intelligent, phrases one wouldn’t have applied to the series a few years ago.


This focus on intricate passing makes it very difficult to score and though it is rewarding, it can also prove frustrating when a brilliant move is nipped in the bud at its final moment. It’s not helped by the fact that FIFA 08 still doesn’t feel as responsive and fluid as Pro Evolution, with button response being average at best while there’s still the inescapable feeling you must wait for an animation to finish before your actions are heeded.

Regardless of these issues, it must be stressed that FIFA 08 still plays a great game of football. Moreover, it’s a distinctly different kind of game to that provided by Pro Evolution. This is no bad thing, and it’s a point enhanced by the plethora of game modes and options at your disposal. 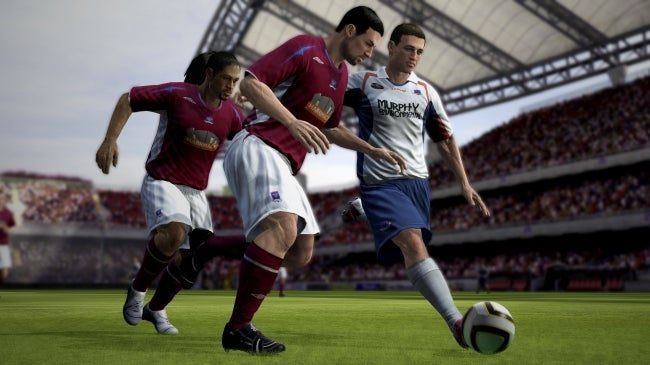 As ever, FIFA 08’s main strength is purely the number of leagues and teams available to play as. Thus, if you’re a die-hard Leyton Orient fan, you can take control of them in the league and propel them to the heights of the Premier league. Simple it may be, but sometimes the simpler things in life are indefinably brilliant. However, if just playing through the leagues isn’t to your liking, there’s plenty more to get on with. For those with a creative bent, there’s a new tournament creation mode. This allows you to create your own competition, using different formats. This is quite a nice addition, especially for creating custom leagues to play with friends over an evening.


There’s also an extensive single-player challenge mode, with a bucket load of slightly contrived challenges stretching across several regions. These challenges vary in difficulty, while each challenge requires you to fulfil certain objectives, such as scoring x amount of goals, maintaining a certain level of possession or even scoring with one particular player. In this instance the game switches to a camera angle that looks down the pitch, with you controlling solely the player that’s subject to your challenge. 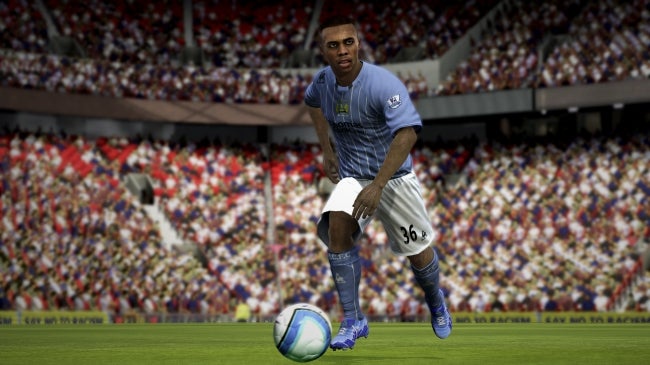 This is part of one of the new features: Be A Pro. Now, knowing FIFA’s history you’d be forgiven for thinking this to be some kind of new gimmick, and in one sense you may be right. However, it’s an idea that has great potential, albeit potential that has yet to be harnessed in FIFA 08. Part of this includes a rather natty training system, which allows you to select one player and learn their position. You can call for passes, crosses and through balls and instruct other players to shoot, with you being rated all the time based on your success at staying in position and doing your job.


It’s a truly interesting system, bringing into stark relief the annoyance when a team mate loses possession when you’re in a good position, or wasting an opportunity you created. Regrettably, this new idea is limited to the fun but brief training mode and the occasional dalliance as part of a challenge. It feels rather like a return to some bad old habits, which is a shame since it’s a rather interesting angle that has some real potential. Hopefully EA will see fit to develop it further in next year’s instalment.

Of all the game modes, however, it is FIFA’s online options that continue to impress above all else. Gaming online is naturally slightly slower than in single-player, however it is predominantly smooth and in my time playing the game I’ve yet to experience any game crippling problems – which is amazing considering how flaky the office Internet connection can be.


Basic options include ranked and unranked one-off matches, which are great quick and easy ways for an online gaming fix. Moreover, in many respects playing online is far more entertaining due to the greater unpredictability of it all and the fact that defences aren’t nearly as steadfast. Another key component is the excellent stats tracking system, which records your wins and losses, streaks and all sorts of statistics besides. As with the main game, you also earn points for playing online that can be used for purchasing extra features such as shirts, boots and various other in-game paraphernalia. 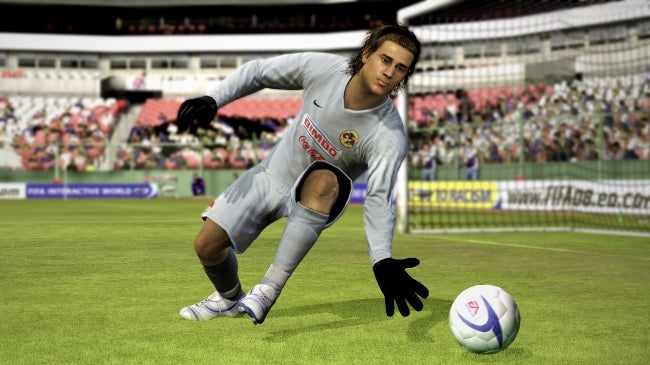 As with most online games there’s a leaderboard to climb, which will be used to match you against similarly skilled opponents. For a more structured experienced you can also enter and create leagues, or choose to represent your favourite team online as part of an ongoing league table. These are all excellent features, making the online experience, on the Xbox 360 at least, among the best you can have in any sports title. This is joined by FIFA’s traditionally exhaustive customisation features, allowing you to create players, teams and so on to your heart’s content.


Taking the massive range of teams, game modes and online options into account, FIFA 08 is another well featured and deep addition of the series. There is a load to do and the game is backed up by some superb animation, graphics, and all the usual things we’ve come to expect from EA titles. Despite some complaints, it also plays an excellent game of football and were it not for those niggles and some underdeveloped features, FIFA 08 could have been all the better. 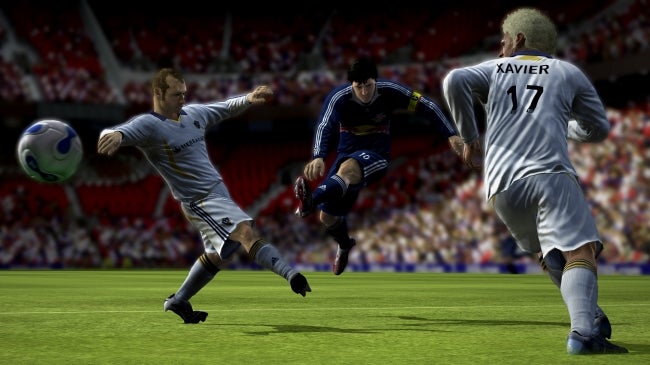 
Though let down by some gameplay niggles and under-developed features, FIFA 08 is still an excellent and entertaining football game that has a little of something for everyone. It’s not quite the killer blow, but it’s another step in the right direction and if you’re already a FIFA devotee, you need not be embarrassed anymore.