There are very few absolutes in life. For most of us the world is full of choices and variables and we tend to change our minds on an almost hourly basis. Of course there are exceptions – Marmite’s advertising campaign is based solely on the fact that you either love it or hate it; there is no middle ground. Another exception comes in the shape of football games. As any footie video game player will tell you, you’re either a FIFA man or a Pro Evo man (or woman of course) – there simply is no middle ground. 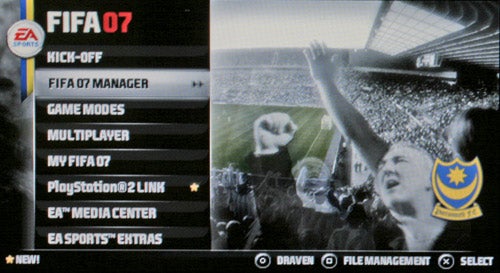 Traditionally Pro Evo has been for the purists, for those players who still think that they could be playing football professionally, despite being three stone overweight and ten years too old. The FIFA series on the other hand has traditionally been supported by players who are just looking for some fun, and enjoy the slick interface, great graphics and awesome soundtrack. Horses for courses you might say.


Unfortunately for FIFA, it’s had a bit of a rough time for the past couple of years. While Pro Evo has improved and evolved into an even better, even more realistic and even more playable game, FIFA seemed to be languishing in a sea of mediocrity. New features and control methods were shoe horned into FIFA releases, but they brought very little new enjoyment to the party, and only seemed to make it more difficult to bond with your players on the pitch. Even though FIFA 06 seemed to be a step in the right direction, there was little doubt that Pro Evo 5 still had it beat, leaving EA playing a continual game of catch up with Konami. 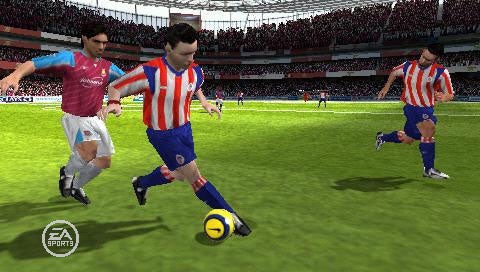 I was therefore not terribly excited when FIFA 07 landed on my desk, but it wasn’t long before I realised that EA has performed nothing short of a miracle with FIFA 07. Before I get ahead of myself I’ll say that I had wanted to review the Xbox 360 version of FIFA 07, but unfortunately it’s not ready yet – it seems that EA is keen to build the X360 version from the ground up, so it’s a little bit behind the current gen hardware. With the Xbox, PS2, PC and PSP versions at my disposal, I went for the latter – it’s been a while since I’ve found anything worth playing on my PSP, so I thought I’d dust it off and throw FIFA at it.

As I’ve already hinted, there are some major improvements in FIFA 07, but the graphics aren’t one of them. To be fair EA is somewhat limited by the polygon power of the PSP. That said, although I first thought that the graphics looked much like the previous PSP version of FIFA, when I fired up FIFA 2006 to compare I realised that the visuals have definitely moved on. Also, the character models are far more recognisable in the cut scenes. There are a few strange glitches, where players appear to momentarily become obese and then quickly slim down again mid run, but this merely brings a smile to your face rather than spoil the gaming experience. 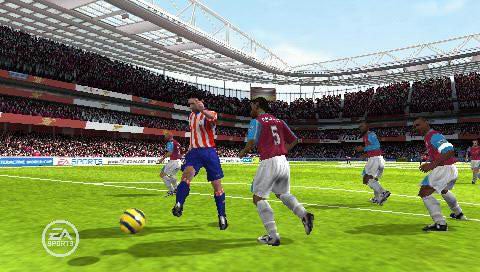 Bizarrely, the really cool advancements in FIFA 07 come off the pitch. The most obvious improvement is the integration of a full blown manager mode. I guess you could see this as EA admitting defeat in the dedicated football management game genre, but for me integrating its management game into FIFA always made sense and I’m glad to see that EA has finally taken the plunge.


Now FIFA is more than just a football game with season and tournament campaigns tacked on to add single player longevity. Now you can embark on a complete management simulation, while actually playing each of your team’s fixtures – it really is the best of both worlds. Of course Football Manager players will probably be screaming at this point, shouting that FIFA 07 couldn’t possibly compare to FM’s management nirvana, and to a certain degree they’d be right, but they’d also be missing the point. Yes, the management side is never going to compare to Sports Interactive’s classic – the development and evolution of Football Manager (from its Champ Manager roots forward) is unparalleled, and I’m sure that many a relationship has crumbled in its wake over the years. But FIFA 07 isn’t trying to compete with Football Manager, it’s trying to create a football game that rolls everything up into one tidy package, and it manages that feat very well. 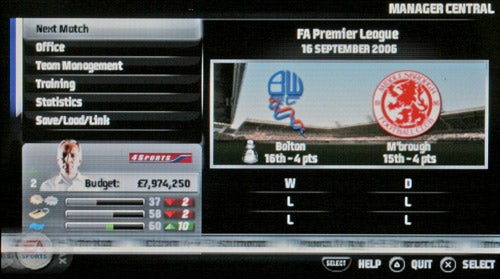 If you choose to go down the full blown management route, you have to first accept a job. You can choose from a list of clubs, each with a differing amount of revenue at their disposal. Obviously if you want an easy ride just apply for a job at Chelsea and you’ll get a £67 million bank balance to play with. Although it’s worth remembering that despite a bigger club having a bigger budget, the board also has bigger expectations of the manager – the board at Chelsea for instance expect you to win the Premiership, win the cup and extend the contract of key personnel. I decided to go for something more challenging and opted for Bolton. How am I doing? Well, I don’t think Big Sam has anything to worry about just yet. 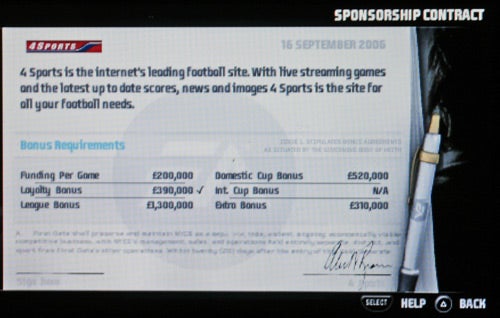 If you’re more into the management side of things you can choose to simulate the matches to speed the process along. But the real beauty here is that you can keep an eye on your team’s progress during the match simulation and if you’re not happy with the way things are panning out, you can choose to intervene and control the remainder of the game yourself. 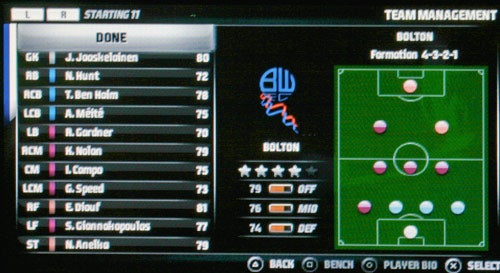 Then there’s the multiplayer angle. As well as the ability to play against your mates over an ad hoc Wi-Fi connection, you can also get online and thrash (or be humiliated by) players from around the world. The online play is very slick and easy to configure, once you’ve entered your EA account details or registered for an account. Although there is the odd bit of lag to contend with, the online gameplay is far smoother than say, the Xbox 360 version of 2006 FIFA World Cup. If there’s one problem with the online play it’s that whenever I was beating my opponent they just disconnected! Sometimes I was still awarded with the win, but it didn’t make the situation any less frustrating.


The reason for the attempted “get out” by players who are losing, is that every match counts towards your ranking. Your win/lose ratio determines your world ranking on the EA servers, so if you want to claw your way up to the top of the league, you’re not going to want to register too many losses. The desire to improve your ranking does keep driving you back online, hungry for fresh meat and adds another dimension to the game. Obviously this kind of dynamic world ranking isn’t anything new and Xbox Live users will be very familiar with it, but it’s good to see such a feature on a PSP game. 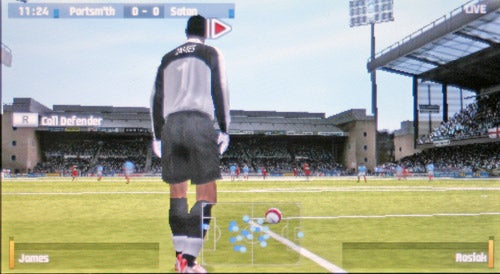 If you’ve been playing FIFA games for a while, you’ll be used to the slick menus and cool music, but FIFA 07 takes this further than ever. Out of curiosity, I fired up 2006 FIFA World Cup and I was amazed at how basic the menus looked by comparison. Of course I’d never suggest that your decision to buy a game should rest on a slick and stylish interface, but when everything else is this good, the great presentation is just the icing on the cake. 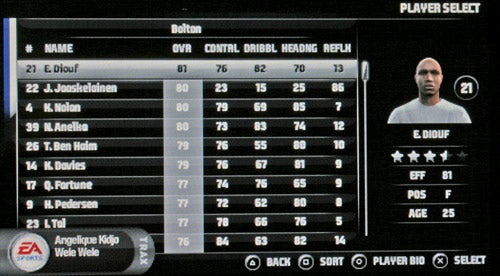 It’s also worth mentioning that the PSP version of FIFA 07 works in conjunction with the PS2 version. So, if you want to play FIFA 07 on your big screen TV when you’re at home, you can fire up the PS2 version. Then if you have to head out, but are desperate to continue your management campaign, you can load the whole thing onto your PSP and continue on the move. This type of integration has been seen before, in Sega’s OutRun for example, but we’re not seeing it enough in my opinion. Of course the obvious down side is that you will need to buy two copies of the game to take advantage of this feature, so you’re going to have to be very serious about your virtual footie.


The bottom line is that FIFA 07 is a great game. Whether you like the franchise, or whether you’re a Pro Evo addict that wouldn’t dare sully your hands with EA’s take on the beautiful game, FIFA 07 is definitely worth a look. I’ve been surprised by how much I’ve enjoyed playing this game both online and in the management mode. And despite being fun initially, FIFA 07 just gets better the more you play it. It’s been a long time coming, but with 07, EA has got its FIFA series just about perfect.


After years of being an example of style over substance, FIFA has finally come of age. The integration of a management simulation into FIFA is a stroke of genius, although it’s something that EA should have done a long time ago. It’s the management angle that helps FIFA 07 rise above its predecessors, but the slick online play is also testament to EA’s efforts to improve the series. The PSP has been short of really good games of late, but if you’re a footie fan and own a PSP, FIFA 07 really is a must have title.