Are sports cars the preserve of footballers and middle-aged men who have been dreaming of the things since they were little boys? Probably, but that doesn’t stop us from wanting to experience getting behind the wheel of a Ferrari. To keep us happy until that day, Ferrari has teamed-up with Logic3 to produce the Ferrari Scuderia P200. Plus a load more headphones besides. But £200 should buy you a whole lot of headphone. Does Logic3 provide the goods here?

Design
A straw poll of the TrustedReviews mob has concluded that the Scuderia P200 headphones are as ugly as sin. They’re loud, gaudy and in no way tasteful in their design, but if you’re reading this there’s a good chance you’re up for a bit of over-the-top branding. Logic3 says they’re based on the headphones used by the F1 team – hence the chunky look. 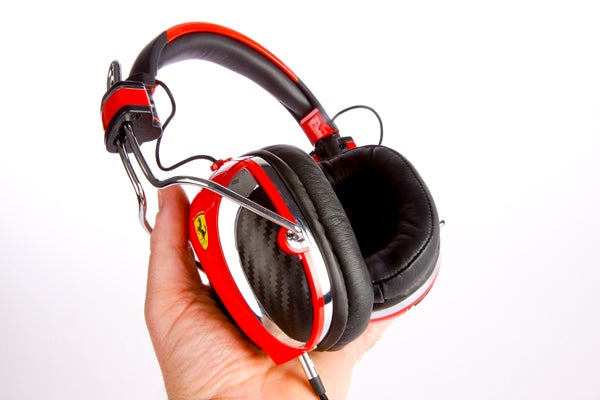 And we can’t blame Logic3 entirely either, as it also offers a companion range of headphones called Cavallino. These trade in the red for muted browns and silvers and try for a more stylish look. For now, we’re going to forget our new anti-Ferrari red leanings, and just ask you to ask yourself whether your Ferrari passion wouldn’t be better served by one of those classier models. 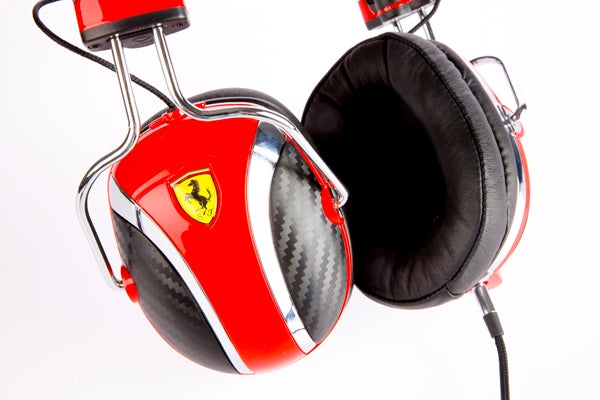 The rear of each exuberant-looking earcup is made of plastic. Although there are silver parts and carbon fibre texture bits, they appear to be simply treated plastic. It’s There’s also an inlaid Ferrari logo on the back of the cups. So far, so Ferrari.

The Ferrari Scuderia P200 aren’t all-plastic, however. Thick rods of metal attach the earpieces to the plastic headband. Heavy-duty swivelling plastic hinges up top make the join, designed to help the headphones fit to your head shape easily. And they do, once you’ve sufficiently altered the headband, which is particularly stiff and requires a firm yank to get moving. 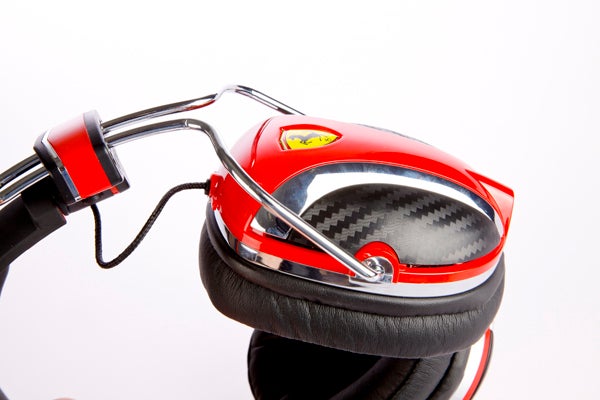 Several elements work together to get us thinking that these aren’t much cop as out-and-about headphones, for the average person at least. Most obviously, their design is extremely attention-grabbing. A bad thing? It depends on your perspective. They’re also very bulky, out to impose with their size as much as their over-the-top design.

Most importantly, though, they’re actually semi-open headphones. A 2mm slit runs around the rear edge of each earcup, opening up the driver enclosure to the outside world. As a result, the Scuderia P200 leak sound a little at medium-to-high volumes and don’t offer particularly good isolation from external noise. We will say that they don’t leak anywhere near as much as fully-open ‘phones, though. 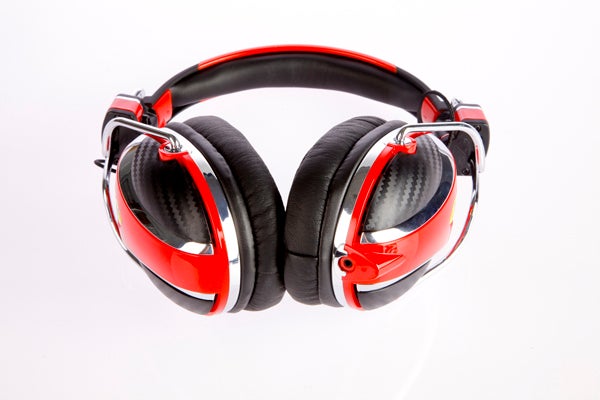 Are these headphones for people who want the brands they’re wearing to scream out like an air raid siren? Do they not care that everyone on the train can hear Europe’s The Final Countdown leaking into the carriage? We’re starting to paint an unfortunate picture of the average Scuderia P200 owner.

Comfort
A key part of making a perfectly comfortable headphone is to marry the right earcup padding to the right headband padding. The Ferrari Scuderia P200 ear cup padding is good, comprised of soft foam topped with high-grade synthetic leather. Padding up top is less impressive, however. It’s not quite as soft, either in its leather-effect finish or the foam underneath. 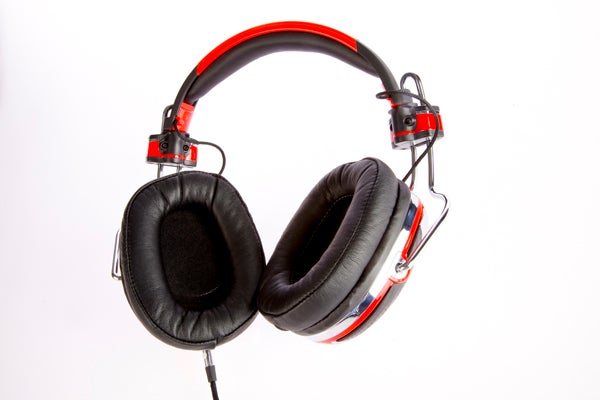 Logic3’s excuse would probably be that the not-insubstantial 380g weight of these headphones needs robust padding. But it ensures that you need to have these cans on your head for some time before the headband stops constantly reminding you of its presence, pushing into your crown – the band seems to use a form of memory foam, causing this pressure to ebb away in longer listening sessions. Unusually, they’re more comfortable for longer sessions than quickies.

The cups will heat your ears up a treat on a warm day, though. Yep, it’s another reason why the Scuderia P200 probably won’t ever become our workhorse commute headphones.

Accessories
Design and comfort earn mixed reports, but the accessory package gets a refreshing thumbs-up. The Ferrari Scuderia P200 headphones are delivered in a zipped funky carbon fibre-effect semi-hard case with a neat carry handle. It bears the Ferrari crest too, and is more demure than the headphones themselves. 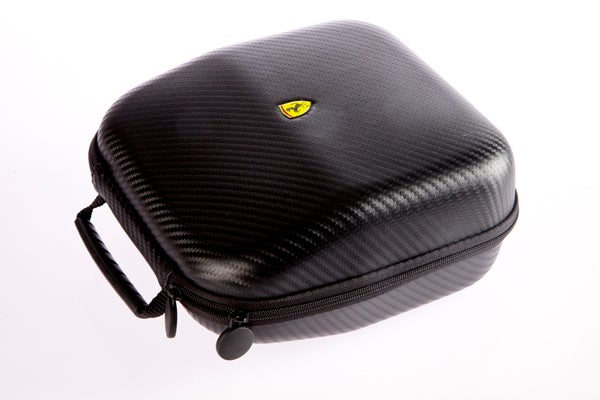 In the case you’ll find a 3.5mm-to-6.3mm jack adapter and an airplane adapter. The most unusual part of the package, though, is that three cables are supplied with the headphones.

The cable here is completely removable, plugging into a 2.5mm jack socket in bottom of the left earcup. Why three? We’re not entirely sure, but they’re all different. One is a basic cable, one has a handsfree kit, and the third a handsfree kit plus a iOS remote to let you change volume easily. 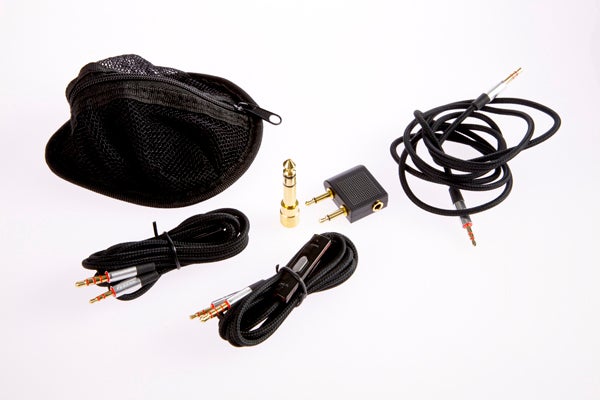 All three are finished with braided fabric, which in tandem with the heavy-duty thickness helps to reduce tangling. However, over the past year we’ve started to become suspicious of braided cables as they tend to work their way apart in normal use. These seem to be high-quality examples, but we did note some minor fraying at the end of one.

Sound Quality
For £200, we expect a seriously-good-sounding pair of headphones, and in some respects at least the Ferrari Scuderia P200’s 50mm drivers supply the goods. While the openings at the side of the earcups reduce sound isolation, they help to provide these headphones with a lush, open sound that’s impressively wide – more what we’d expect from an open-back pair than one such as this.

The expansive sound is complemented by fairly sweet, smooth treble. The overall tone is a very pleasant one at times – rich and silken with the right material. 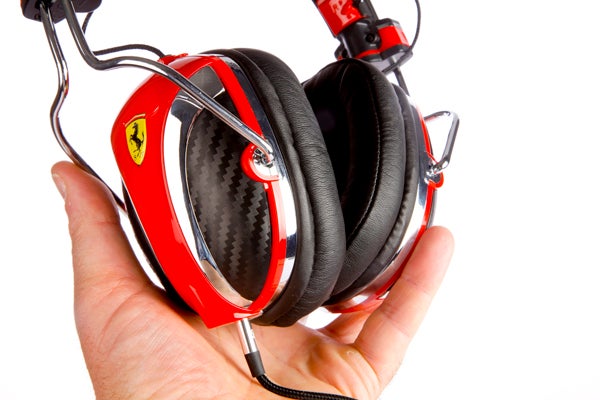 However, there are some issues with the tuning of these headphones that makes us question whether they’re worth the money. The bass is, to repeat adjectives, smooth and full – and fairly deep too – but isn’t as disciplined as it should be in this class. It routinely oversteps its boundaries when there’s an excitable kick drum or bass guitar involved, pulling focus in a way that’s not really acceptable in a £200 headphone.

In situations where vocals are involved too, this issue is worsened by the relatively weak mid-range. With a tendency to sound a little sucked-out and hollow, the underpowered mids do not give vocals the requisite presence to stand up against the occasionally boomy low-end. 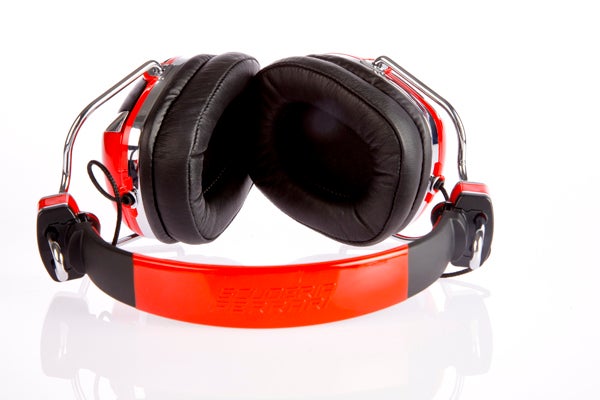 These are absolutely enjoyable headphones, but if you have particularly picky ears, you’re unlikely to be entirely satisfied with the Ferrari Scuderia P200. It comes as no surprise given how much of the cost of these headphones is likely tied-in to the branding, but you can do better for the money. 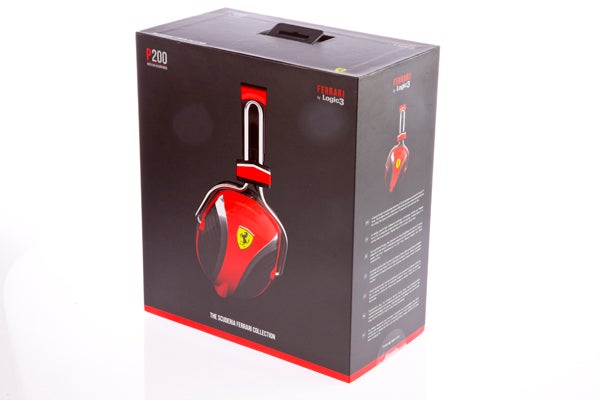 Value
As soon as branding starts to play a big role in a product, value comes into jeopardy. These are among the cheaper high-end headphones in the Scuderia range, which rockets up to £328 for the noise-cancelling R300 model. You could even argue that at £200, these are pretty cheap for a Ferrari-endorsed product – heck an official Ferrari keyring costs £138.

However, in some respects, the Scuderia R200 is the least desirable of the new bunch of headphones. 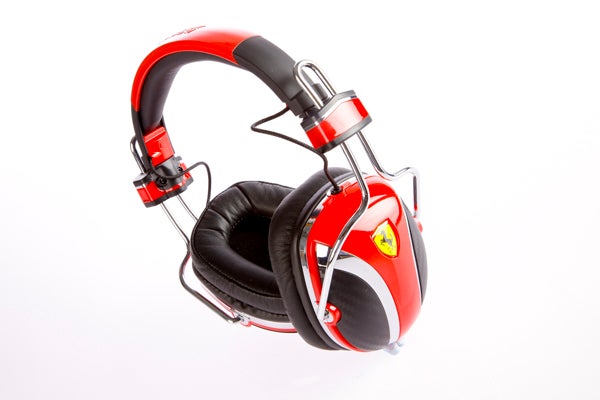 Other models look more tasteful and have a more practical folding design – it’s hard to know quite where these headphones belong. If you’re just out for at-home headphones, you’d be much better off sticking to alternatives from Sennheiser or AKG. They’re more comfortable and offer superior sound quality.

Read our round-up of the best headphones

Verdict
The most brazen of Logic3’s new Ferrari-branded headphones, the Ferrari Scuderia P200 are as loud and attention-grabbing as the cars they’re based on. And we’re not convinced that’s a particularly good thing. Large, non-foldable, and with giant sound ports along the sides, they’re not particularly good portable cans either. They offer deep bass and sweet, smooth treble, but mids are weak and bass control is less than expert. Unless you must have headphones that pack-in as much “Ferrari” as possible, you can do better elsewhere at the price.