Ferrari Challenge: Trofeo Pirelli is what you might call a grower. System 3’s homage to all things Ferrari has obviously been built to a budget, and has a lot going against it. Within an hour of play you’ll spot that it has got several annoying traits, not the least being that it’s a rather unforgiving and difficult game that at times seems hell-bent on throwing off the more casual racing game fan. The timing isn’t great either, coming within weeks of Codemaster’s awesome Race Driver: GRID; a game that does a lot of what Ferrari Challenge does in a more exciting and more accessible way, and with far more spectacular graphics.


Yet despite all of this, the game has something special going for it. It’s not another generic GT or PGR wannabe, it has enough of its own identity to carve out a little niche for itself in the PS3 racing world, and the more you play it, the more it grips. Ferrari Challenge is not quite strong enough to be – as some might wish it – the PS3’s answer to Forza Motorsport 2. All the same, those who, like me, would be tempted to dismiss it as one for the Ferrari baseball cap and boxer shorts brigade, might change their minds if they gave it a few hours. 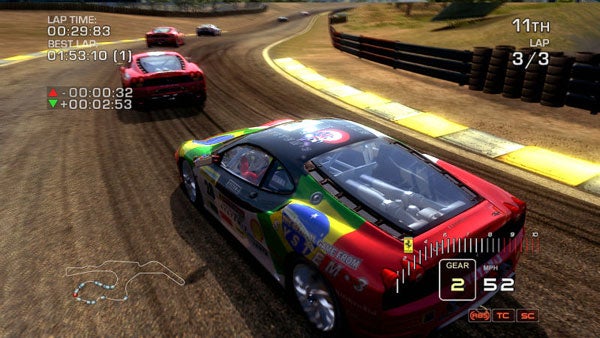 It doesn’t help that the single-player structure is both a bit old-fashioned and rather fragmented. Among the quick-race, arcade and time trial options you’ll find two modes that make up the meat of the game; Trophy mode and Ferrari Challenge. The latter is seriously old school, divided up into three championships based in Italy, Europe and America, each consisting of a series of race weekends set across 13 tracks (some actually repeated within the same season), complete with a qualifying session and two race sessions.


The Ferrari Challenge is limited to one car – the F430 – but working through the three championships gives you the chance to unlock additional Ferraris that you can then buy and use in Trophy Mode. This is a less coherent series of three-track championships where you can prove your mettle across the whole range of available cars and courses. After something like GRID or PGR4 this all feels a little pedestrian, with nothing but a growing car collection to tie the different modes together. But then Ferrari Challenge isn’t about giving you a proper career mode or a variety of driving challenges: it’s focused squarely on delivering an authentic experience of racing Ferraris. 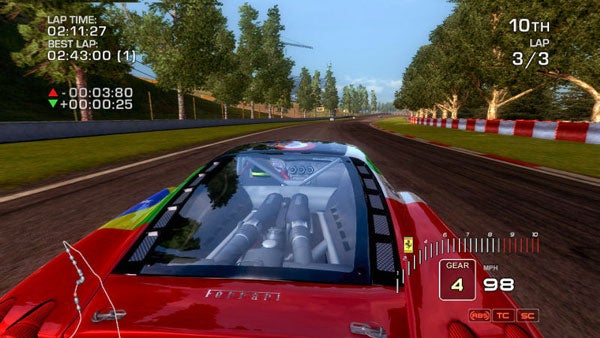 And this is where it’s going to win or lose the punters straight away. Despite a generous selection of driving assists (including some lifted straight from Forza) and a nice interactive tutorial mode featuring advice from Fifth Gear’s Tiff Needel, Ferrari Challenge is not an easy game to get into. It’s not as tough as, say, GTR2 on the PC, but it’s certainly harder work than either Forza 2 or GT5: Prologue to get into. These are real racing tracks, even when renamed for legal reasons, and the handling model is relatively unforgiving.


If you’re not inclined towards the technical school of driving games then prepare to spend a lot of time coming off the track, accidentally taking shortcuts and getting hit with penalties. Switch down the brake assists and stability controls and you’ll also find yourself spinning out. In your first few games you can probably expect some low placings and some pitifully poor qualifying times. It takes time to get used to the subtle shifts of direction, brake and accelerator that Ferrari Challenge demands.

Nor has System 3 made things easier for the novice here. Amazingly, there’s no restart option in the Ferrari Challenge or Trophy modes, while the races are set by default to last a fairly lengthy fifteen minutes – about two to three times what you’d expect in many modern racing games. This means that you can spend a few hours in the game getting virtually nowhere, your only reward being some additional car unlocks that are thrown in merely for completing an event. This might put less committed racers off for good. To be honest, it nearly did me. 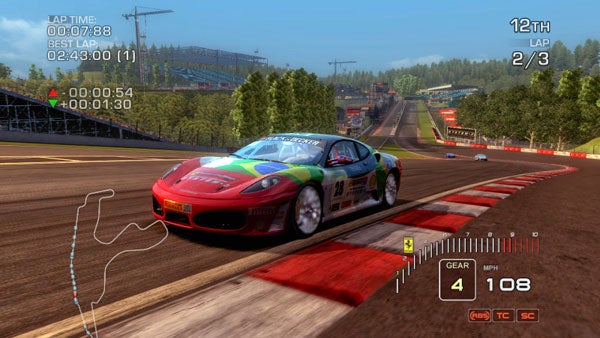 I’m glad it didn’t though, because once you get into it the racing itself is actually very good. True, it’s not as thrilling as it is in GRID or PGR4, but the AI plays a solid, aggressive, high-speed game without making it impossible for you to pass, and the handling model is gritty and satisfying once you get used to it. You’ll make mistakes, inevitably, but most of the time the only person you can blame is yourself. Plus, according to the observations of those who are bigger motorsports fans than I, the reproduction of the cars and tracks is very good.


Those who dismissed GRID for its more arcade leanings will be very happy indeed (even if I personally think they’re missing out). With experience, the wins start trickling in, and there are several tracks – particularly Paul Ricard or California – where certain sequences of turns and curves make just the feel of driving enjoyable in itself. Throw in some excellent rainy weather and you have a driving game with enough challenge to keep any wannabe Lewis Hamilton happy. The only minor black mark is damage. It’s modelled, but in a very subdued manner, and you can still use many of the classic GT bumper-car cornering techniques if you want to cheat your way through the pack. 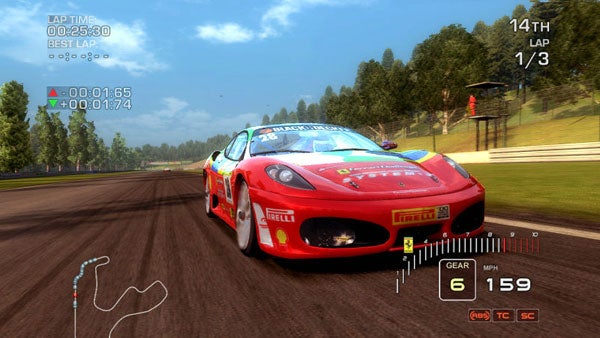 So where does the budget show through? Well, in terms of glossy extras like replay modes or photo modes, Ferrari Challenge is no GT5 or Forza. It’s also telling that there seem to be fewer cars and tracks than we were originally promised; apparently some are to come later as downloadable content, but having raced through Monza twice in one championship, you might not be too impressed to find it there again in the next (even if this is how the real Trofeo Pirelli pans out).


Most of all, however, it’s the audio that lets the side down. Engine notes aren’t as powerful or throaty as you might expect, and the experience through headphones isn’t as exciting as it is in GRID or Forza 2. The music is also a bit of a let down, with a fairly meagre selection of tracks that you’ll hear over and over and over. Again, it’s not what we’ve come to expect from modern racers.

Luckily the visuals are another story. Does Ferrari have the photorealistic gloss of GT5 Prologue or the twisted metal spectacle of GRID? No, but its trackside scenery is more interesting than Forza 2’s and you can see where most of the polygons have gone: on the cars. Ferrari Challenge needed to celebrate the beauty of these Italian engineering marvels, and it does, capturing the lines and curves of the bodywork beautifully, with the sort of glossy reflection effects and fresnel highlights that you’d expect from Polyphony, not a small UK developer. This isn’t the most visually impressive racer out there, but it’s certainly no dud. 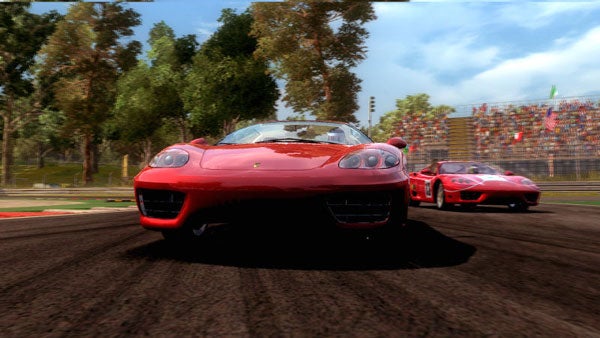 Unfortunately, things fall down again when the game goes online. When you can get into a game the action is fast and fluid, and Forza-like touches like customisable finishes and vinyls are a nice touch. Getting into a game, however, is the problem. Despite a clear interface and search facilities I took ages to find a game I could actually join after myriad attempts saw me thrown out of lobbies, off servers and even disconnected from PSN. This could always be my connection, but I know there are plenty of Ferrari Challenge players out there with similar tales of woe. Apparently this should all be cleared up with a forthcoming patch. 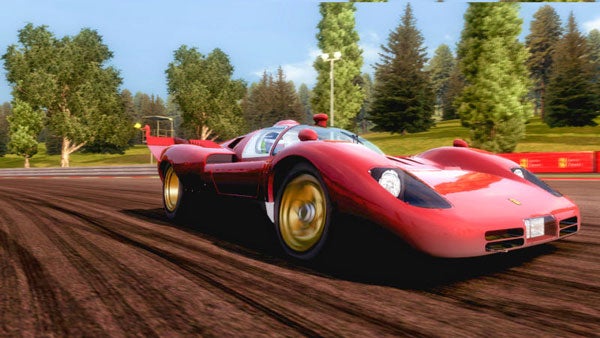 In the end, Ferrari Challenge is a difficult game to score. It still feels stripped back and old-fashioned when compared to the bigger names in the genre, and for most people GRID offers a more instantly rewarding and exciting game. If you don’t like the technical feel and the level of challenge, you’ll find that System 3’s game leaves you cold. Yet I know that there are a lot of people out there who want a driving game that demands skill, rewards experience and gives you a more authentic reproduction of cars and real-world tracks.


On the 360, these people are already well served by the likes of Forza 2, but on the PS3, where GT5 Prologue is the only real competition, Ferrari Challenge is currently the best bet out there. For Ferrari fanatics it’s an absolute must, but anyone with a PS3 and an interest in the more serious driving sims should also give it a try – though maybe from a store with a generous returns policy, just in case.


For a game based on this particular marque, Ferrari Challenge can feel overly-technical and lacking passion, but with its decent graphics and strong racing feel it deserves to be a hit with the more racing audience.