The stereotypical image of a home Hi-Fi is a pretty bland one. It’s all black boxes and no personality for the most part. But Ferguson Hill offers something rather different. Its most famous product is the FH001, a gigantic see-through horn speaker that originally sold for an eye-watering 20 grand. The UK-based Hi-Fi expert has since been working its way back down to planet Earth, and its latest setup, the FH009, is remarkably accessible in price.

It shares the same see-through horn speaker design as its gigantic granddad, but costs just £800, and includes everything you need to get setup. The FH009 still has high-end aspirations, but it’s the sort of package that needn’t scare beginners. 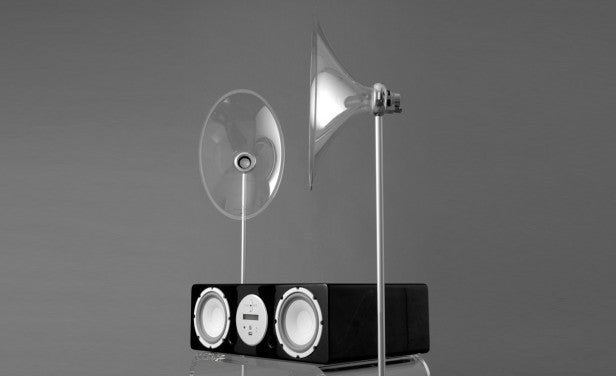 Part of this is down to its simplicity, from a technical perspective. This is a rudimentary stereo system, and so doesn’t require the sort of headache-inducing calculations that come with setting-up a 5.1 or 7.1 system properly.

There are three main units to the FH009 – two horn speakers and the central unit, which houses the dual 5in bass drivers, all the connections and the two amplifiers. The horn drivers and bass drivers are treated to an amp each, rated at 64W a pop.

The main amplifier and bass driver unit is pretty large, standing just under 20cm tall, but should fit on the shelves of most large TV stands. This is where it feels most at-home, and indeed Ferguson Hill is marketing this as a home cinema system, though with it being only a standard stereo system, lacking any sort of receiver functionality, this is a bit of a stretch.

For the most part, build quality of this chunky unit is superb. Crafted from heavy wood and thick black lacquer, it should look the part. But the circular front panel spoils the effect somewhat. It’s tactless, pushing a USB slot and 3.5mm mini jack up front when they are at best periphery features. If your main music source for the FH009 is a USB stick loaded with MP3s, you’re doing it wrong. The power button also feels a little cheap. 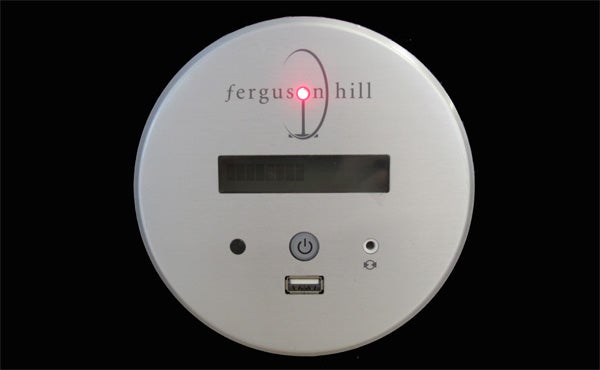 These seeming concessions to practicality are contrary to what this system’s all about. The unusual see-through horn design marks this out instantly as a lifestyle system – and a key prerequisite of such a system is that it has to look the business in any lounge. Thanks to these odd design mis-steps, the FH009’s central unit doesn’t, or at least doesn’t to the extent we expect when forking out £800.

The horn speakers themselves fare much better. Each sits atop a speaker stand made up of screw-together anodised metal poles. The stands are not hugely height-adjustable, but you can use either one or two of the poles with each horn, standing at roughly either waist or knee height. 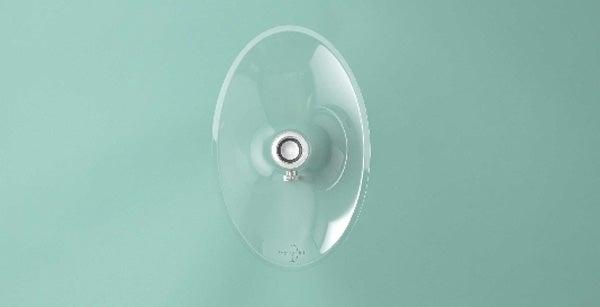 Larger Ferguson & Hill see-through horns appear brilliantly ridiculous, but these smaller units are relatively unassuming. There’s something a little strange about a design so odd squeezing itself into such a commonplace form factor, but given the right room they look fab – as the transparent acrylic horns make them sink into the background to an extent, they need a classy environment to feel at home. We think they look best wall-mounted, but the inclusion of decent stands is a major plus when even entry-level Hi-Fi stands can cost around a hundred pounds.

In a standard setup within a lounge, the Ferguson & Hill FH009 replaces both a stereo Hi-Fi and a surround setup. But in pure functionality terms, it’s a wholesale replacement for neither.

In connectivity terms, it’s rather bare. The FH009 offers just two phono stereo inputs and the 3.5mm jack/USB ports on the front panel. We find it somewhat amusing that both the phono inputs are labelled “Auxiliary”, when it’s patently ridiculous that they’d be anything but the primary inputs here. Aside from being low-rent in Hi-Fi terms, a connector cable dangling from the 3.5mm input of the front panel is going to do its already-faulty aesthetics no favours whatsoever. 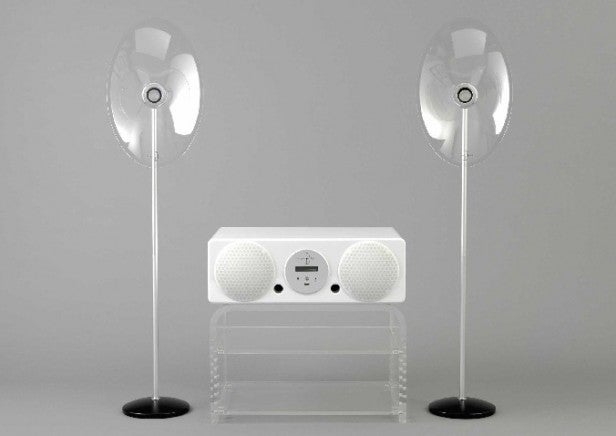 When so much common tech kit is geared towards use with optical or HDMI audio connections – from game consoles to Blu-ray players – having only archaic phono sockets to rely on is hardly ideal. But the audio quality of these connections is perfectly fine.

There’s a very old-school approach seen throughout the FH009. Whether you’ll find this charming or irritating is something we can’t judge, but the dipping of toes in digital waters with the MP3-capable USB slot doesn’t work in its favour. 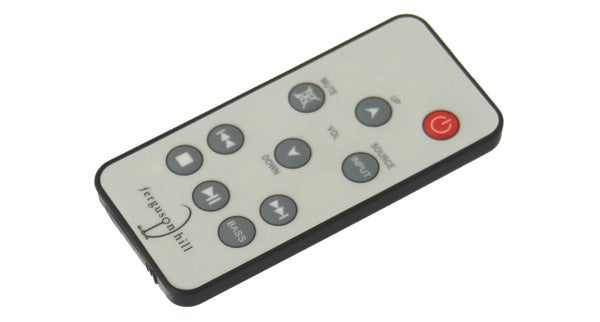 To switch between sources, you have to use the supplied remote control. It’s a pretty generic cheapie model, with little dimples instead of proper buttons. We wouldn’t mind quite how unimpressive it feels if it weren’t for the lack of a source select button on the central unit. Short of teaching a universal remote how to emulate the controller, you’re tied to its little plastic body. And to add insult to injury, the FH009 defaults to the USB input upon power-up – the one we imagine most are least likely to use.

The Ferguson & Hill FH009 is a Hi-Fi system we warmed to at first glance. It’s unusual, and the product of a company pushing against the norms of the market. But it doesn’t make loving it easy. We can understand the simple approach, but the sense of being streamlined hasn’t been injected along with it – there are one too many clumsy parts to the FH009.

All our complaints until now have been mere quibbles, though – things we can forgive if the FH009 blows our winter woollens off with its sound quality.

The Ferguson & Hill FH009 splits audio duties between the horn drivers and the central unit. Each horn unit features a small speaker cone at its centre, whose dinky stature may surprise those not familiar with horn designs. Although they’re the most visually-commanding part of the setup, their job is to provide the top-end sweetness we’re looking for – while perhaps not as wholly treble-obsessed as a standard tweeter, it’s up to the much larger drivers of the central unit to augment the sound with body and “slam”.

Upon first setting-up the system, we noted that both the horn drivers and the central unit speaker cones emit more hiss than we’re used to from new speaker systems. It may be argued that it’s subtle, but we could notice it from our standard listening position, a couple of metres away from the speakers. It’s also not something that you’ll be able to hear when the system is outputting audio, but does seem to kick in whenever the unit is on, and no matter which input is selected. 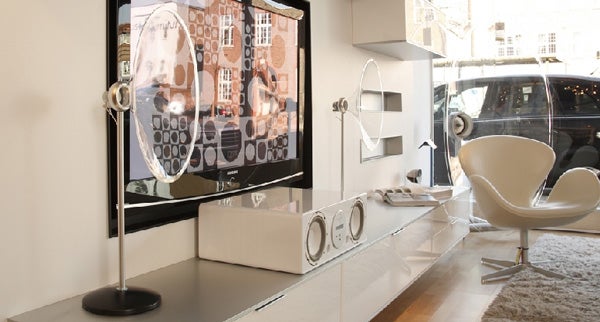 What the FH009 is good at providing is sound with scale. Some lifestyle systems can sound rather small, but this one has that full-bodied, assured sound of a full-size Hi-Fi. It also goes terrifyingly loud – unlike the recently-reviewed Libratone Lounge, which was rather too well-mannered on that front.

After putting up with the limitations of the FH009’s old-fashioned approach, it finally pays off with sound. There’s plenty of warmth and mid-range texture, which those of you who love to cling on to the idea of a warm, analogue-sounding past will no-doubt appreciate. It works wonders with vocals in music in particular.

When given tricky material, the system does tend to trip up a bit, sounding a little muddled at times. The FH009 doesn’t have the clarity of the top-end models in Ferguson & Hill’s range (no surprise given they cost around 10 times the price) or plenty of other systems available for this money, and when this is wedded to warmth, this effect is a predictable outcome.

Switching over to films, we started to feel the lack of a subwoofer. While the 5in bass drivers can handle a kick drum with ease, they can’t render the roar of action film explosions all that convincingly. However, you can plug in up to two subwoofer units using the ports on the back of the main unit. Ferguson & Hill provides its own FH008 sub for £275, and is a good idea if you’re thinking of this as primarily a movie partner. But if that’s the case, you should perhaps consider a 5.1 system – for £800 you can buy a great one.

Looking through Ferguson & Hill’s back catalogue of products, we can’t help but feel that the central unit of the FH009 is a weak link. It lacks the elegance of the acrylic horns and the orbs of the FH007, and doesn’t feel as carefully-designed as it should be. When this is a system that can’t hide such issues behind a wall of features, this is a definite drawback.

With home audio systems based on an unusual look, you often have to let go of the idea of value for money, but not so here. Packing-in a large central unit and two horn speakers complete with stands, £800 sounds like a good deal for such a system. However, the Ferguson Hill FH009’s old-school approach comes with plenty of compromises, including limited connectivity and noisier operation than we’re used to. The payback is a warm, involving sound – though it is a little bass-light for movie-watching.