There are a few basic rules that all journalists understand and adhere to – most of the time. One is that whenever Microsoft releases a piece of software, several years are then spent fixing all the problems with it. Another is that when something’s so stylish it wouldn’t look out of place in a central London penthouse apartment, it’s bound to be expensive – and rubbish to boot. 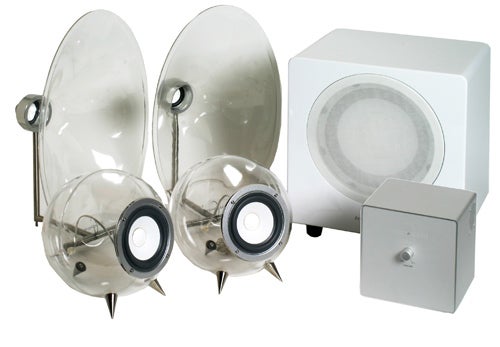 That was certainly my first impression upon pulling the delicately made Ferguson Hill FH007 mini-speakers out of their rather large boxes. Here’s a product that just screams “style over substance”: a stereo speaker consisting of two fruit-bowl clear acrylic horns, two football-shaped clear acrylic mid-bass speakers and a big, beefy sub-woofer in shiny iPod homage white livery.


The whole lot is powered by a cube-shaped amplifier with just two inputs – one 3.5mm input for your iPod (or other stylish pocket music player) – and another pair of phono sockets for a proper hi-fi component, like a DVD or CD deck. It looks fantastic resting on a table, desk or speaker stands, and costs an appropriately expensive £750 for the set. But before you lose all hope or roll your eyes in exasperation, stop and reverse your expectations; the FH007s turn out to be pretty good value for money too. 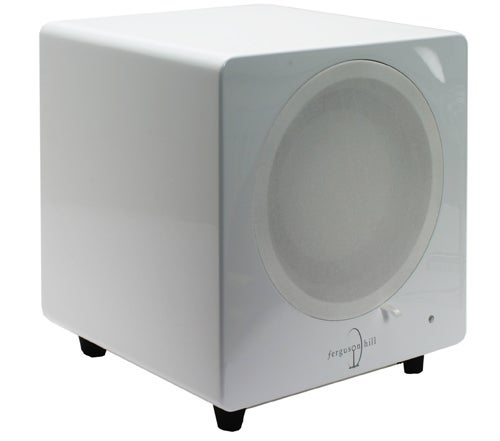 How can that be? After all, £750 is a huge amount of money to spend on a desktop speaker set that a) isn’t portable, b) isn’t surround and c) doesn’t have enough inputs to serve as a speaker set for your main hi-fi or AV system? A clue to the answer lies in the speakers’ origins. Ferguson Hill is no ordinary speaker manufacturer. Its main focus, in fact, lies in rather esoteric, high-end audio. This is a subject that’s close to my heart, but one that inevitably leads to extremely high prices and a large amount of crippling debt. The FH007s are basically a miniaturised version of the only other speakers that Ferguson Hill makes – the FH001 and FH002 – and these man-sized speakers require an investment of considerably more than ten grand – £12,512 to be precise.


So let’s put the FH007s in context for a moment: here, you’re getting a slice of high-end, non mass-produced audio art for under a grand, and benefitting from the research and design experience of a company that normally plies its trade in the rarefied atmosphere of high-end audio. That’s something that’s not to be sniffed at.

Another reason these speakers are such good value lies in what you get for your money. Part of the reviewed package is not only those arty clear acrylic horn and mid-bass speakers, but also an extremely hefty and powerful 100W sub-woofer unit. You can choose not to buy the sub, but to be honest, the speakers on their own aren’t very bassy, so it would be foolish not to. 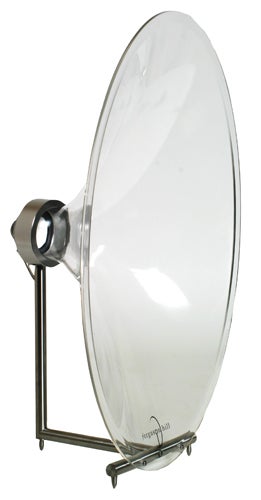 On top of the sub you also get a beautifully-built amplifier which has been made specifically for the FH007s. This bi-amps the speakers, which means that, unlike a standard speaker and amp setup, each of the four passive drivers is powered by its own amplifier circuit; standard setups involve a single amp per stereo channel and rely on passive crossovers in the speakers themselves to split the signal between the high and low frequency drivers. To this end, the amplifier features five 3.5mm outputs: one pair for the horn speakers, one pair for the mid-bass speakers and a single output for the sub, with each speaker output supplying 16.4W of power.


The detailing is also very impressive. Each of the horn speakers might be 38cm high, but the blemish-free transparent horns will just disappear into the background of your living room (you get a pair of cotton gloves with which to keep them clean). They’re supported by slender, brushed aluminium tubular stands which lead to three spiked feet, and a set of silicone feet have been supplied to further isolate the system from vibrations. The spherical bass speakers, similarly, rest on chunky aluminium cones and also have silicone feet supplied for them. 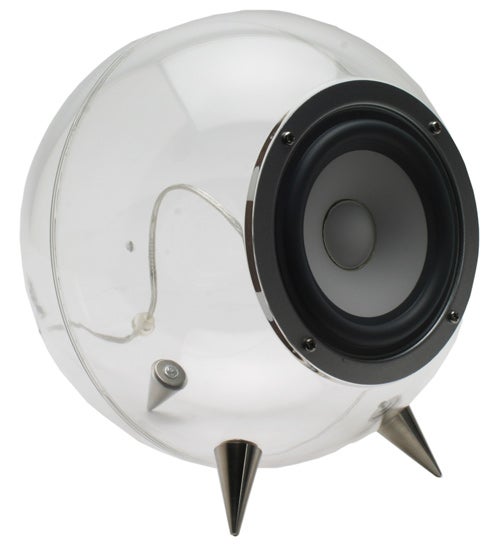 The final and decisive reason these speakers are so good, though, is the sound quality. The first time you fire them up they sound downright awful – but given two solid weeks of running in, playing away to themselves at medium volume levels and music is transformed from sounding as if it’s being played through a trombone with no mouthpiece to a truly revolutionary, transparent and emotional experience.


The secret to this lies in the design of the speakers. Unlike most bookshelf or floor-standing designs, which use bass-mid drivers coupled with a tweeter for just the high end frequencies, the FH007 utilises what could be called a semi-full range approach. Whereas most tweeter-based speaker designs split the frequency at around the 2kHz mark (tweeters typically reproduces sound above this to 20KHz, while the bass/mid drivers focus on the range below it) the FH007’s horn speakers reproduce sounds from 340Hz all the way up to 20kHz with the spherical bass units covering the frequencies from 75Hz to 350Hz. The sub is adjustable in the 50Hz to 150Hz range.

The difference might not sound like much, but when you consider that the ear is most sensitive to frequencies around the 2-3kHz mark, which is precisely where most speakers cross over from their mid/bass drivers to their tweeters, the advantages of a single driver to cover the whole range become obvious.


The horn, or horn-loaded to use the correct term, design also means that the speakers are highly efficient and able to reach loud volumes with very little movement of the driver cone. In theory this means lower levels of distortion – both at the amplifier and speaker ends of the equation – as the speakers are having to shift less air, and the amplifier circuitry is having to do less work. 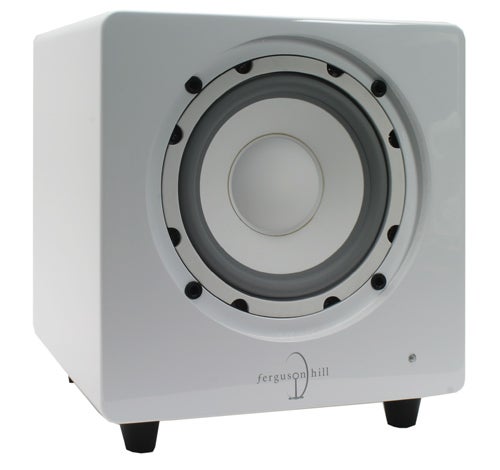 So much for the theory: does it work in practice? Well, it very much depends on the sort of music you want to listen to and the volume you want to listen at, but in most instances I’d have to say the answer is, most certainly, yes. Firing up Diana Krall’s When I look In Your Eyes reveals the true strengths of the FH007s. Her smoky vocals just leap from the speakers in a way that seems holographically real. You can hear plenty of detail, such as when she takes breaths in between phrases, but importantly, the rich, subtle singing never overwhelms these speakers and they remain silky smooth right up to the top end, with a remarkable lack of sibilance and distortion.


Moving on to a touch of Stacey Kent and the performance is repeated. Stereo imaging is remarkable – these speakers not only melt into the background physically, but they also do so in an audio sense. The FH007s create a soundstage that’s convincing, and they do so in a completely effortless way that’s a joy to the ears.


Listening to some classical Spanish guitar played by the inimitable John Williams also plays to these speakers’ strengths. Each pluck of the nylon strings on his guitar hangs in space before the speakers, as if the great man were sitting in your living room giving a personal recital. The rasp of finger against nickel-wound strings sends a shiver up your spine.


On Ben Folds’ jubilant piano-led pop on Songs For Silverman there’s a sense of space realism to the music that ‘normal’ speakers just can’t reproduce. And even a bit of Metallica – at medium volume levels sound great, with the sub really helping to thump out the low notes and the bass spheres working well on the driving guitars. 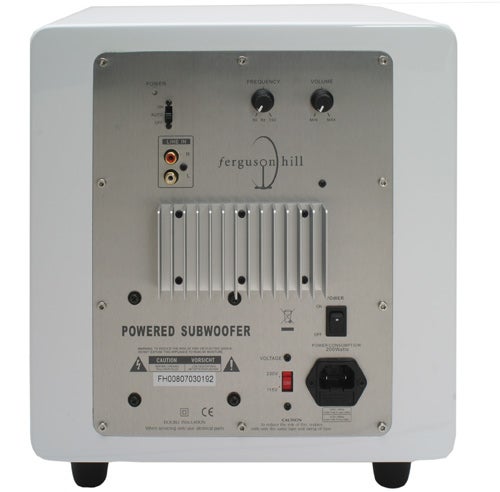 There are a couple of caveats, though. These speakers don’t deal with loud, dramatic music very well. Push the volume right up to neighbour-bothering levels while listening to something demanding, like Mozart’s Requiem, and the FH007s will start to sound a little muddled. Likewise, a session of Soundgarden, Biffy Clyro and The Prodigy had me hankering after a more traditional, box speaker sound. The FH007’s horn-loaded design also means they’re not a great party speaker. They’re highly directional, so for the best sound quality you have to point the speakers straight at your listening position. Move off axis and that detail and involving sound starts to disappear. These are small points in the overall scheme of things, but ones that are worth bearing in mind when you’re thinking of buying a set.


You’ll have probably figured out by now that I think the FH007 speakers are very good. But I’m not going to pull the proverbial high-end audio wool over your eyes: they’re not perfect for every scenario. If you mainly listen to dance or metal at ear-splitting volumes and like your rock to rattle the window frames they won’t be for you. It’s also a shame the amp doesn’t have more inputs. If it did, I’d consider recommending it as the main amp and speaker setup in a basic separates system. And it’s a pity the sub is such a behemoth, which detracts a little from the overall appearance.


But in every other respect, the FH007s are simply stunning. Despite the seemingly high price tag, these speakers are actually great value for money for an amp, sub and speaker set up. They look wonderful, resplendent with their transparent spheres and horns, and the amp is well-designed too. But all that takes a back seat when you start to listen. They produce a sound that’s detailed, natural and emotionally involving in a way that you just don’t get from traditional speaker designs, and that’s worth paying good money for.