As the last set in our current ‘credit crunch TV’ series, Ferguson’s F2620LVD makes for an intriguing finale. Partly because it’s got a once-trustworthy brand name attached to it that most of you will actually have heard of before, and partly because despite costing just £350 for a 26in LCD TV, it’s also got a DVD player built into its rear. 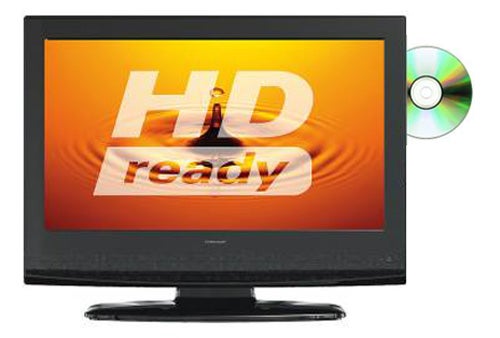 The set quickly plants our feet back on the ground with its design and build quality, though. For the finish is flimsy and plasticky, and it looks exactly like any number of other TVs found crowding the shelves of electronic superstores and supermarkets across the UK. In other words, it’s a desperately dull black rectangle, no more, no less.


The F2620LVD’s budget nature is, if anything, even more apparent in its connections, which include just a single HDMI and a single SCART when we’d normally expect to find at least two of each. 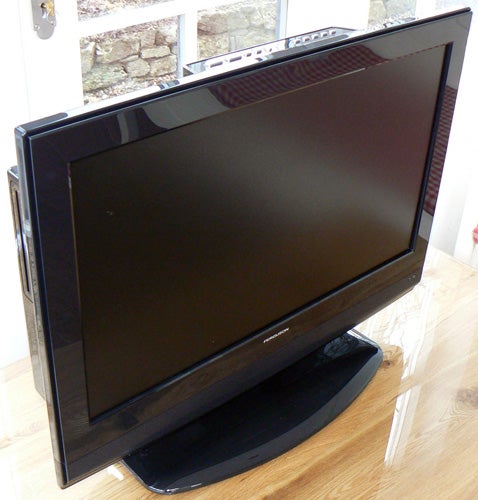 Still, if I’m reasonable about this, I guess Ferguson could argue that having a DVD player built into the F2620LVD reduces the need for a second HDMI input. Also, the set does manage to provide a D-Sub PC port, which is something commonly ‘forgotten’ when putting together self-consciously cheap TVs. Plus there’s a coaxial digital audio output for shipping Dolby Digital audio streams from DVDs to an external receiver.


Setting about actually using the F2620LVD quickly sets my nerves back on edge, though. For both the remote control and onscreen menus are pretty horrible. The remote is so lightweight and plasticky it would probably blow away in a gust of wind, and even though my remote arrived in a completely sealed new package, one of the buttons – the ‘up’ menu navigator – wasn’t working properly. 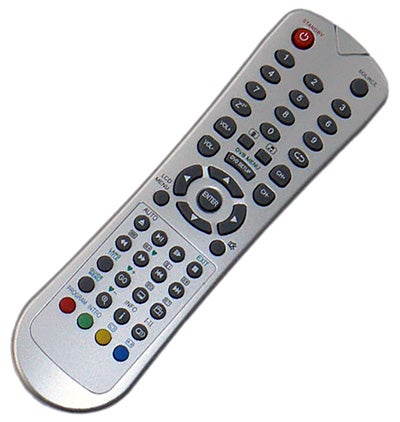 As for the onscreen menus, they’re ugly with a capital U, as well as being unnecessarily small, making them quite tricky to read from any sort of distance.


With this in mind, it’s actually quite a relief to find that the number of features on board the F2620LVD is extremely limited. Pretty much the only thing I found that runs beyond the standards found on any TV is a simple, multi-level noise reduction routine. Whoopee and, indeed, doo.

Turning to the TV’s DVD section immediately uncovers a couple of (potentially irritating) oddities. First, the DVD slot on the rear left side will only take in discs if you first select ‘DVD’ from the source list; it won’t ‘grab’ a disc at any time and then automatically switch the TV to the DVD input, as you might expect. As a result, the potential for damage to a disc and the TV from a child trying to shove a disc into an unresponsive slot seems disturbingly high.


The other strange thing is that you have to put discs into the slot with their printed side facing away from you, something that runs counter to normality – not to mention common sense. 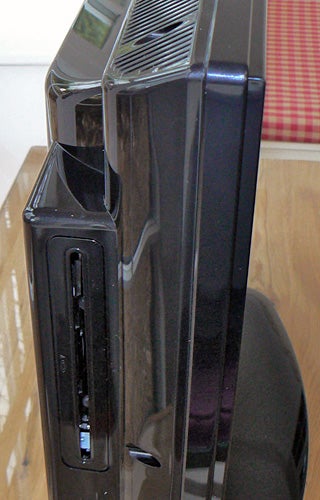 For the record, I might as well add here that like the TV section, there are no interesting tweaks within the DVD section’s onscreen menus. Oh well; at least all the screen aspect ratio and video format settings have been correctly preset for you, and the deck can play JPEG and MP3 files. Please note, though, that there’s no DivX support.


Happily, the F2620LVD does retain an HD Ready 1,366 x 768 native resolution despite its aggressive price. But that’s pretty much the end of the good news in specification terms, for the contrast ratio claimed for the set is a pretty demoralising 700:1. As usual, this lowly figure reveals that the Ferguson doesn’t carry a dynamic backlight system, which could dim the image’s brightness during dark scenes to boost the perception of black level.


And as is often the case with affordable LCD TVs, the lack of such a dynamic backlight really hurts the F2620LVD. In fact, not to put too fine a point on it, its black level response sucks. For not one, but two reasons. 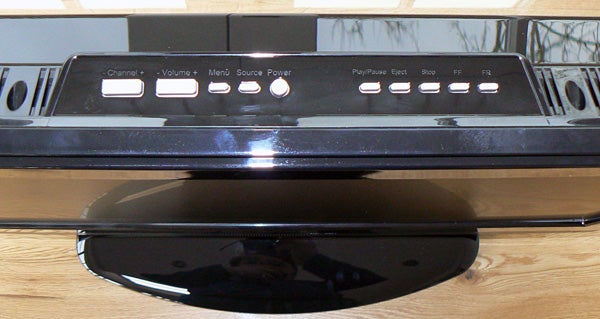 The most predictable of these is that dark scenes just don’t look dark at all, as the screen fails to resolve anything approaching a true black. Instead, it looks like someone’s shining a torch onto the screen, turning black into grey and blotting out large amounts of background detailing in the process.


The other backlight nasty concerns the inconsistency with which the light hits the screen. I spotted numerous vertical stripes down the picture where, for whatever reason, the picture is darker than it is to either side. I counted seven of these stripes on my screen, and to make matters even more distracting, they’re not even of a uniform thickness or intensity. At times the effect looks eerily like ghostly shadows emerging from a bank of fog. Scary. Maybe director John Carpenter will borrow the effect for his next low budget horror yarn.

I guess you could argue that the pay off for the F2620LVD’s backlight issues is that its pictures are unusually bright for such a small LCD TV. But for me and anyone else who ever watches a film or good drama from time to time, the severe black level issues have pretty much already killed off this TV’s chances.


Especially since, as is often the case, the F2620LVD’s disappointing black levels prove pretty damaging to dark colour tones, leaving them looking unnatural and muted.


This issue with dark colours is exaggerated, too, by the way colour tones spring to actually quite dynamic life during predominantly bright footage. For a classic example of this extreme difference in action, compare the dark scene in the jungle at the start of trusty Blu-ray favourite ”Casino Royale” with the bright ‘free-running’ sequence shortly after it. While the first scene looks horrible in colour (and contrast) terms, the second is quite an enjoyable watch thanks to its vibrancy and vastly more natural appearance. 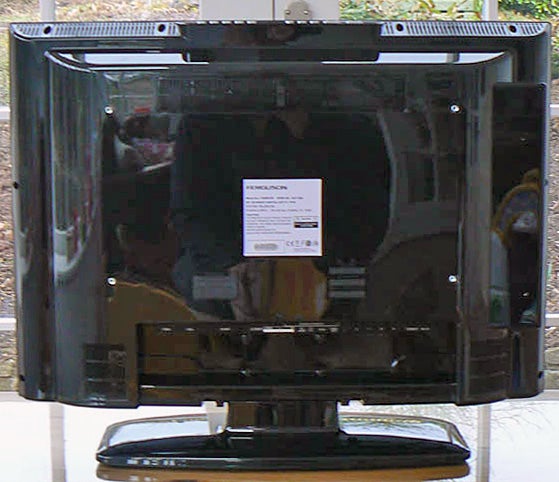 Now that I’ve kind of slipped into vaguely positive territory, another factor contributing to the ‘enjoyable watch’ of the ”Casino Royale” HD sequence is the picture’s surprising sharpness. The set really can deliver a sense of HD (versus standard definition) better than some much more expensive small-screen TVs we’ve seen.


The Ferguson’s clarity is also much less blighted than expected by LCD’s classic motion blur issue. There are definitely traces of it, especially with standard definition, but it’s seldom really distracting, and certainly never as bad as with any of the other three ‘supermarket’ TVs I’ve looked at recently. 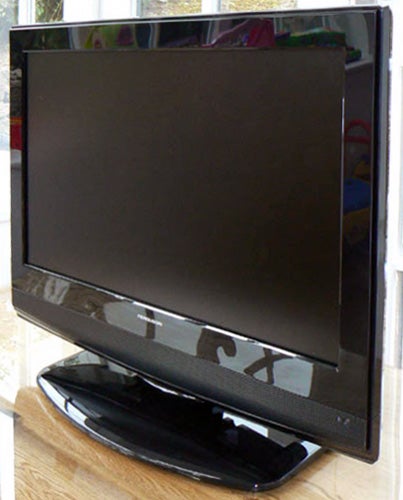 Having mentioned standard definition back there, I have to say that while standard def sources are translated to the F2620LVD’s HD Ready resolution without much noise being added, they also tend to look rather soft and undetailed, at least with Freeview broadcasts.


Things look a little better using the built-in DVD player, presumably on account of the higher quality of the source material. And it’s nice to note, too, that the DVD deck doesn’t seem unduly prone to MPEG blocking noise or twitching.


But enabling me to finish on the sort of negative note the F2620LVD really deserves is the set’s audio. As is so often the case with cheap, smallish LCD TVs, there’s precious little bass in the soundstage, a fact which means male voices commonly sound too thin while action scenes sound flat and one-dimensional. There’s no great definition to the soundstage either, though at least the set delivers its trebles without making them unduly harsh or sibilant.


This budget Ferguson couldn’t be any more of a mixed bag. With bright, colourful, high quality sources, it’s really not bad at all, raising hopes of the tidy all-rounder I’ve been longing for throughout my intermittent Credit Crunch TV review series. But unfortunately things fall apart so disastrously during dark scenes that the TV becomes at times borderline unwatchable.