When Fear The Wolves was shown off at E3 earlier this year, the idea of a post-apocalyptic 100-person deathmatch in Chernobyl, of all places, seemed fascinating. The added player versus enemy elements like radioactive anomalies and mutant wolves looked to keep things interesting, and the added angle of incorporating elements of the S.T.A.L.K.E.R universe made it appear like a surefire success.

Unfortunately, with the game’s Early Access release, the current reality is much more disappointing.

The concept behind Fear The Wolves is fantastic — rather than a gas cloud or storm, there’s radiation that seeps in and covers grid squares on the map. Another switch is that Instead of being the last-player-standing, players could opt to flee on the helicopter that only has room for one person.

Rather than grabbing a backpack and carrying as much loot as possible, you could go for an oxygen tank and choose instead to face the radiation and other hazards instead of your opposing players. While most battle royale games encourage you to engage with your enemies, Fear The Wolves is one of the few that offers a way to win that doesn’t involve kills. 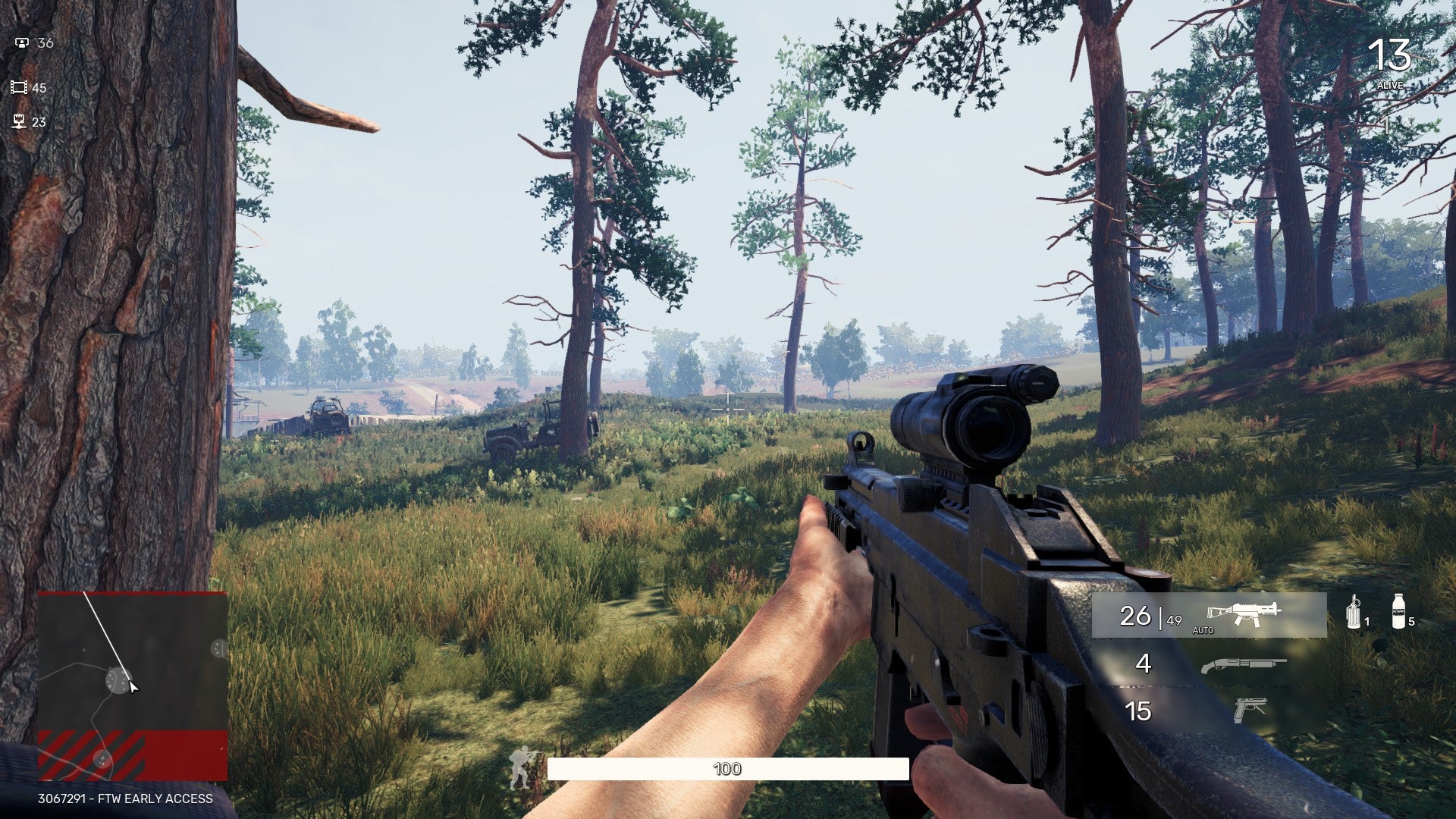 In the current state of the game, however, these methods don’t tend to work because of the persistent issues. A lot of the problems boil down to technical issues – A fellow player found that his framerate would drop by 10-15 FPS whenever he aimed down the sights of his weapon, while another issue was that when jumping out of the helicopter at the start of the match, the game would stutter and freeze when other players were hopping out, meaning an optimal jump at the right time was nearly impossible, mostly involving spamming the F key and hoping.

When you do make it down to the ground and past the technological hurdles, it’s pretty smooth sailing for the initial parts of a game. The rigmarole is the same as any other battle royale title: find some buildings, grab a gun or two, find ammo and healing items, then watch out for other players.

As you’d expect from the name, wolves are also a threat, albeit a minor one. If you have a pistol, they’ll go down in a couple shots. Unequipped? Start running and they’ll eventually lose interest. It’s less about fearing the wolves and more along the lines of avoiding the wolves, as they’re a minor nuisance.

Eventually, radiation will start to appear throughout the map. Thing is, you would expect the radiation to seep in from the sides and spread from a single source, but it doesn’t quite work that way. The outskirts of the map do tend to be affected quicker, but seemingly random areas in the center, separate from the rest of the radiation, will often be selected. It’s impossible to predict where could be hit next, which makes long-term strategies difficult to implement.

Related: Shadow of the Tomb Raider 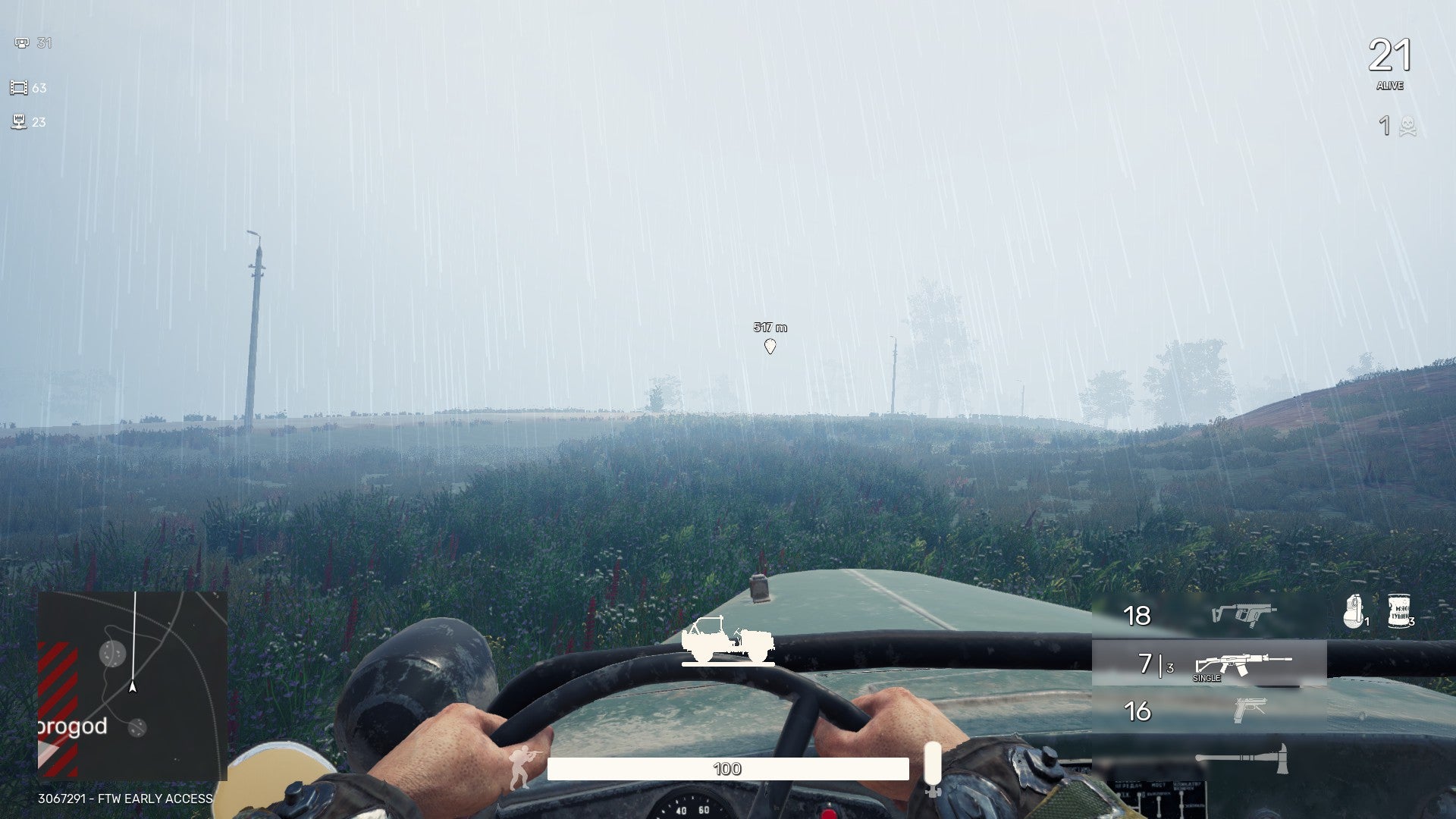 You’re given a 90-second warning if the grid square you’re in is going to be irradiated so you’re given a chance to flee, but it’s impossible to predict where the radiation will move to. If you don’t find yourself a jeep, there’s a good chance you’ll die a horrible, irradiated death before you can find safety.

While the map isn’t enormous, jeeps are a necessity if you’re not in the central areas because otherwise, you’re going to be running for a long while. They’re not electric so of course they emit noise but they’re nowhere near as bad as one would expect from a 4×4 vehicle. Looting up quickly, hopping into a jeep then driving into a central forested area and camping behind some trees is one of the most viable strategies we’ve found. Saying that, the first time we exited a jeep near a tree, we flew through the bottom of the world and automatically died, so there’s a lot of work that still needs to be done.

Weather effects are something you have to take into consideration too, as spectators can vote on the current conditions. If there’s a storm a-brewin’, vehicle handling becomes much more difficult and visibility is reduced. Fog means you can only see a few feet in front of you while a heatwave creates a haze on the landscape so your shots are harder to land, along with healing items being less effective. As far as battle royale games go, Fear The Wolves has done weather the best, but requiring spectators to vote on it isn’t optimal because most players would prefer to just leave the game and queue into the next one.

This hasn’t been too much of a problem so far though because the player count is so low. The average playercount since the game has launched has been at just over 140 and when the game is advertising 100-player games, matchmaking has been a slog. There are three servers available too which means that each game takes 5-10 minutes to get underway and there’s usually less than 50 players per match. We played on EU servers which seem to be the best populated ones, but there’s a number of players that should be on either the NA or Asia servers in each game. Coming up against one in a fight is a laggy mess. 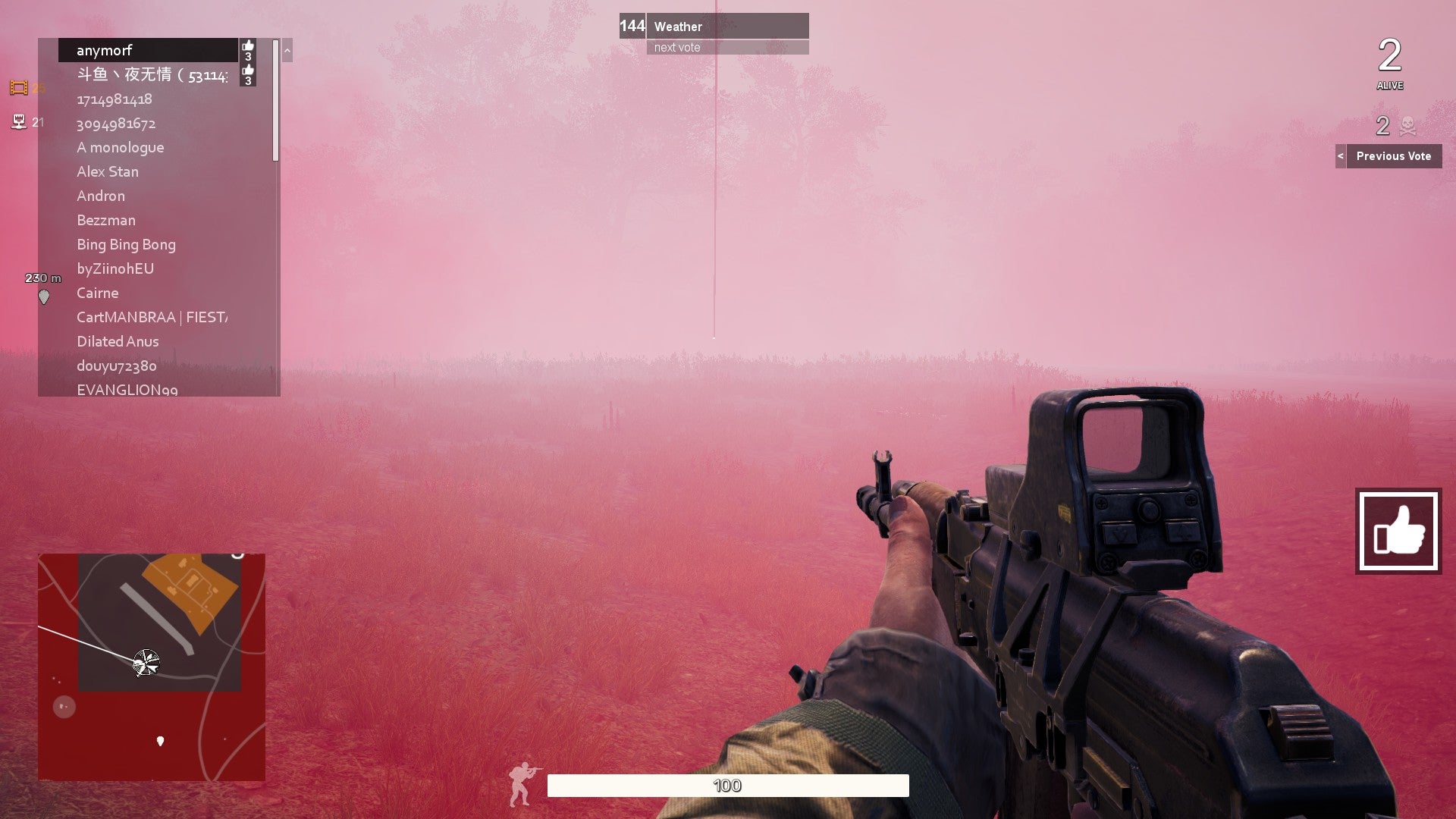 The rescue helicopter will fly in when there’s around 10 players left, give or take. It flies over to one of the safe areas on the map, drops the rope and deploys clouds of red smoke. Endgame action tends to have a lot of players camping in that area, baiting out those foolish enough to make the first move and dash towards the chopper.

In theory, the helicopter is a potential way to win the game but realistically, everyone with a pulse is going to pepper you with bullets as soon as you start climbing the rope to salvation. So far, a better option seems to involve carefully sneaking around, using the red smoke and nearby foliage for cover, trying to eliminate everybody else.

Fear The Wolves has so much potential but right now, most of it is untapped. Technical issues and bugs mean the experience is still hit and miss, especially in regards to the radiation and the endgame action.

It’s not worth picking up in its current state but the foundation has been laid, it just needed another month or two in the oven before launching in Early Access.