I don’t do drugs, but there are parts of Fe that are so visually strange, filled with such abstract colours and designs, and so reliant on otherworldly sounds that I got a pretty good second-hand indication of what the experience might be like.

All of which is to say developer Zoink’s latest game – the first to launch as part of publisher Electronic Arts’ new indie-focused “EA Originals” label – is thoroughly, delightfully weird. The story is even more abstract, an ecolological fable of sorts told entirely without dialogue but deeply dependent on sound.

You control the eponymous Fe, a shadowy fox-hawk-lizard creature, adorable despite its chimerical nature. When Fe’s vast forest home is invaded by cycloptic golems that silence the world around them and hunt down the living creatures, it’s up to Fe to put things right. There’s something deeper going on though – as you progress, you’ll find strange orbs, which deliver flashes of experiences as the golems, giving insight into what they’re doing in the forest. 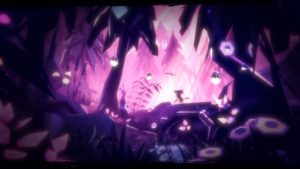 Mechanically, the game of Fe is as much of a hybrid as its titular hero. Part platformer, part puzzle, part Metroidvania, part stealth – there’s a lot going on. Thankfully, all its disparate systems are masterfully entwined, and delivered to the player in a manner that is, for the most part, surprisingly intuitive.

Initially, Fe can only sing to the other animals in the forest. It’s a gentle skill, controlled with the R2 trigger (on PS4), and the pressure you apply alters the pitch of Fe’s cries. Resonate just right with another creature, and they’ll help you.

The first physical skill you’ll learn is how to hop up trees – allowing you to scale to higher points – but as you explore the forest, dodging the golems and helping other animals, you unlock further abilities, such as gliding and activating special flowers that aid your navigation. Help certain key creatures and you can learn their language, allowing Fe to sing to more species, in turn accessing even more abilities. As your aural repertoire expands, you’ll be able to access areas you couldn’t reach before, creating that satisfying loop of exploration and power-creep that makes the likes of Castlevania so enticing.

What’s truly remarkable though is how Zoink has all but mastered the use of visual language and storytelling to move the game along. There’s no prompt to hide from the golems should they spot you, for instance, but their terrifying designs – hefty but skittering shadows, with spindly limbs and glaring spotlight eyes – convey the message that they’re dangerous and will hunt you down, while the fact that the world is peppered with black, spiky shrubs and you’re a black, spiky creature conveys the point as clearly as an on-screen message.

Stones that sparkle with unknown energy beckon you to sing to them, revealing visual hints or background lore when you do. Fe offers a world that invites you to explore and experiment, and frequently rewards your curiosity. 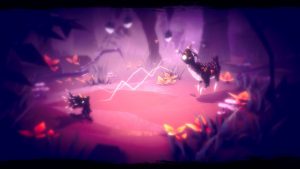 However, with absolutely no dialogue and only the most minimal of control explanations when new powers are unlocked, parts of Fe can be too obtuse for its own good. An early puzzle sees you retrieving a god-bird’s egg from a cave guarded by a sort of bear-troll. The trick is to switch the mystical egg with another shiny trinket, but the gem glows with the same hue and in the same resonance as much of your surroundings, making it difficult to spot. I eventually figured it out more by chance than anything, when I resorted to trying to pick up everything in the cave. Other puzzles throughout the game fall victim to similar faults of over-design, turning moments of delight into ones of frustration.

But delight and wonder remain the overwhelming emotions that you’ll experience playing Fe. It’s a stunningly beautiful world, awash in colour and light, and with no shortage of spectacle. Every time you think you have a handle on the general aesthetic, it finds new ways to surprise, be it the totemic design of the apex creatures who teach you languages, or the awe-inspiring giants you begin to encounter as you inch further into Fe’s forest – gargantuan beasts that make Shadow of the Colossus‘ enemies look like dwarves. Along with a level of audio design that outclasses many AAA games, and entrancing, almost meditative music, you’ll unfailingly be swept up into this world. 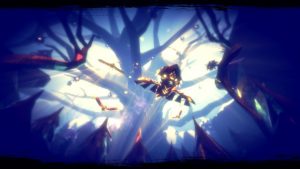 Fe definitely owes a conceptual debt to the likes of Ori and the Blind Forest, and in places feels as twee as earlier EA indie effort Unravel, but this is more than original enough to stand on its own merits. The mind-warping use of colour and its near-spectral environments sometimes work against Fe’s best interests, but persist and you’ll uncover a truly special world.