Exclusive to Nintendo Wii U

If anything, the title is an understatement. A futuristic racer in the vein of WipEout, F-Zero and Quantum Redshift, Fast Racing Neo starts off as a ludicrously speedy racer then only gets faster, finally reaching speeds which, frankly, some of us aren’t equipped to handle. I’m not suggesting that it’s the fastest racer ever, but it’s certainly the fastest I’ve come across since the Zone mode from WipEout Fusion and WipEout HD. If you want fast racing, it doesn’t come much faster.

It might, however, come with more originality and invention. Fast Racing Neo plays things pretty straight from the WipEout rulebook, with a series of teams fielding angular, hovering craft which speed along ribbons of track which loop and undulate over a range of sci-fi scenes. Your craft turns left and right, accelerates and brakes and can tilt to drift around corners with a squeeze of the left and right triggers. If you misspent some of your youth with the original Psygnosis classics, Fast Racing Neo looks and feels very familiar, never quite reaching their all-encompassing design brilliance, but proving a little easier to control. 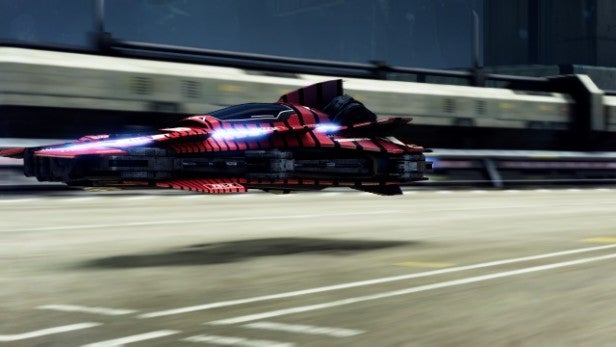 This game’s major innovation is a switch of mechanics. Out go the slightly Mario Kart-esque weapons and shields of the WipEout games, in comes the kind of colour-switch mechanic you might find in one of Treasure’s cult-classic shoot-em-ups. On ever track there are blue or orange strips that either boost your craft or slow it down. To get the boost rather than the brakes you need to make sure that you ‘phase switch’ your craft so that it matches the colour in question. In Fast Racing Neo, it’s not enough to scan the horizon for the next tight bend or obstacle – you need to keep your eyes on the upcoming colours to make sure that you’re blue or orange when you hit the strip.

Later on, this habit becomes even more essential. First the game throws in a kind of jump gate, which hurls your craft forward and up into the air if you’re in the right phase but slows it down if not; a serious issue if you’re hurtling towards a ramp or gap. Then Fast Racing Neo adds circular portals, which either let you through or slow you further. What’s more, strips, gates and portals start cropping up in various combinations, making perfect timing and a good memory for their sequence almost as vital as the basic cornering skills. 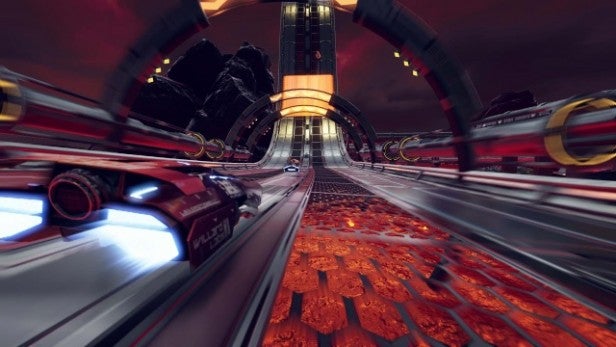 If the gameplay is a little old-school, the structure is a serious blast from the past. There are four championships consisting of four races each, and you only get to move on to the next championship if you can come third or better in the existing one. Complete all four championships in one speed class and you then get to move on to the next and race the same tracks even faster. There’s an even more challenging Hero mode for those who can master the third speed class, plus time trials for every class and track. That’s roughly it as far as progress goes.

Now, there are a lot of things to like about Fast Racing Neo. The sensation of speed is dazzling and the handling is mostly well-judged. Your craft grow both faster and quicker to accelerate as you rise through the championships, but also more difficult to corner, encouraging you to find the right balance for the current championship and tracks. And while the visuals lack the sharp 1080p clarity of those in the PS3 WipEouts, the tracks show off some fantastic scenery and there are some impressive spectacles to witness as you race. Touches like the giant stomping spider-mechs in one level or the waterfalls in another take me back to the glory days of Sega and Namco’s arcade racers. All of it runs at what seems a faultless 60fps. 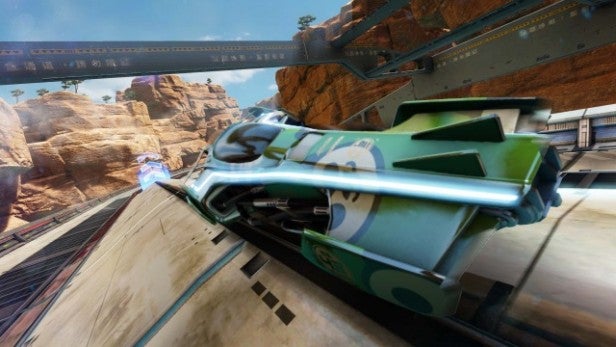 In other respects Fast Racing Neo is no match for its inspirations. You can’t blame the team at Shin’En for not having the budget to fill the soundtrack with cutting-edge EDM, but the music it has found is fairly generic and unengaging stuff. You’ll be pining for The Chemical Brothers, Aphex Twin and FSOL. What’s more, Fast Racing Neo lacks the density and impact of WipEout’s sound effects, which were as much part of the experience as the visuals.

More importantly, Fast Racing Neo is hugely, annoyingly frustrating. Some levels are utterly brilliant, engaging your brain in that classic WipEout sense of zen-like flow, but too many others are spoilt by sudden obstacles, gaps, asteroids, boulders and barriers which either halt your craft or result in its immediate destruction, invariably putting you some distance back and behind the ridiculously close pack of rival racers. What’s worse, some of these are unpredictable, and while you’ll soon learn that you have to steer left on going through a portal to avoid falling off the track or crashing, that doesn’t make it any the less annoying then it happens for the first time. Fast Racing Neo is the kind of racer where any mistake can see you fall from third or fourth to ninth or tenth position, and it’s not the kind of game where you can easily claw that back. 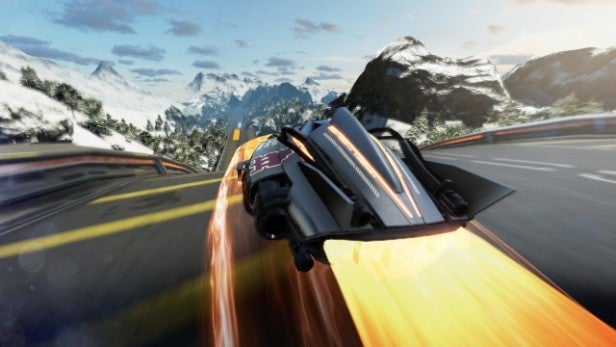 I could just about stomach even this were it not for one thing: blow the race and you can’t quit out and restart it. Nope. Shin’En has set things up so that you can only quit out of the championship altogether, meaning that a slip-up in the fourth race can undo all your hard work in the first three. Things could be worse– it only takes around twelve minutes to get through each championship – but that doesn’t mean it won’t get on your nerves.

I know full well that some folks will consider this a plus point. They’ll say that games like Fast Racing Neo should be, if anything, more challenging and that those who don’t like the heat should steer clear of the kitchen. They may have a point. Yet I wonder how many people will try FRN and never even see the higher speed classes, all for a structure that could so easily be fixed. 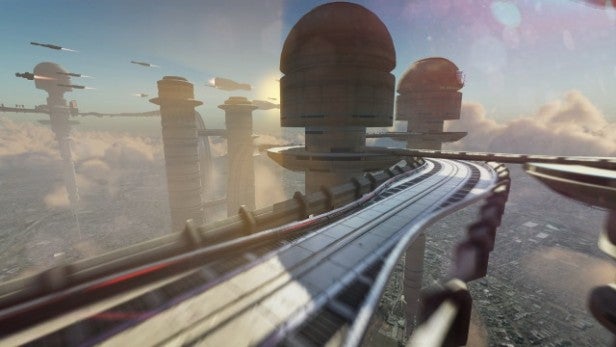 It’s certainly not a big enough problem to damn the Shin’En’s game. Sure, it’s a bit like going to see a tribute band covering a classic artist, but as with the tribute band the price of entry is nice and cheap. There’s scope for some fun local multiplayer sessions, with fast-moving, split-screen four-player action, and while we’ve yet to try online action with a full eight-player setup, even the two to four-player games we’ve tried have run smoothly and felt competitive.

With a few fewer pitfalls in the track design and some minor changes, this could have been a brilliant racing game, not just a fast one. As it is, it’s not one of the greats, but a decent effort to recreate their magic all the same.

Verdict
Fast Racing Neo never quite recaptures the glories of the WipEout series, but it’s a fast, exciting and visually impressive attempt, complete with a phase-shifting, colour-matching twist. It is a frustrating game thanks to its retro-tinged design decisions, but if you yearn for the days of pounding soundtracks, trance-like focus and pulsing visuals, this is a real blast from the past.