I had started to worry not only about PlayStation VR, but virtual reality in general. After closing out 2016 with a huge bang, it felt as though things had gone a bit quiet for the technology. A seeming lack of triple-A titles to really turn the heads of a mainstream audience made me wonder if this was another VR flash in the pan. But the PlayStation Aim Controller hasn’t only reinvigorated my enthusiasm for the tech’s potential, it’s become the only way I want to play VR shooters. Farpoint itself? Not so much.

Sony has designed the PlayStation Aim Controller specifically for first-person shooters. It includes all the buttons of a regular Dualshock 4, across its two grips, as well as duplicates of certain inputs to allow for both left- and right-handed players.

The left analogue stick and D-pad are placed at the foregrip, along with L1 and L2 at the rear; the right analogue stick and face buttons can be found at the rear grip. R1 is placed on either side of the barrel, just above the trigger, and is used as the reload button in Farpoint. It’s an excellent build, and a decent layout of all the buttons ensure that even when the headset is on, I know where everything is.

But the real brilliance comes in-game, when you realise just how amazing and now-essential the Aim Controller is. Every VR shooter needs the Aim Controller: it makes every shootout significantly better, and it adds an incredible level of immersion that takes virtual reality to the next level. Having to bring the gun up to my shoulder to aim down sights, closing one eye for better accuracy, and pulling the trigger and feeling the vibration, is simply superb. 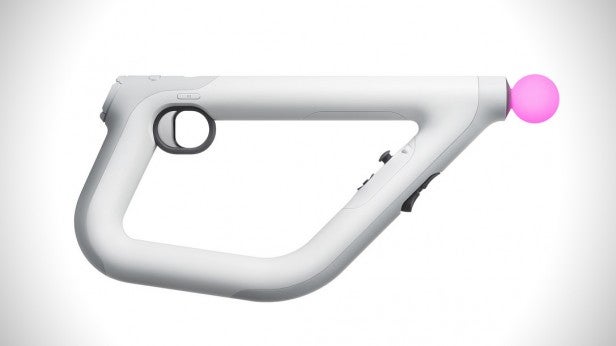 The Aim Controller is simply a triumph

It’s also a relief to know that this peripheral isn’t too demanding of space. Sat around 1.5 metres away from the PlayStation Camera, all it requires is a clean line of sight to the gun. It’s incredibly immersive, and has me thinking about the potential it could bring to other great VR titles, such as an Aliens experience or Time Crisis. Unfortunately, though, in this bundle Farpoint is hugely lacking when it comes to offering a compelling experience to support the peripheral.

In my pre-release experiences playing Farpoint, it felt exactly like Starship Troopers: The Video Game, thanks to its giant arachnid creatures and exploration of a giant dust bowl planet. This may sound like great fun, and it is in short bursts, but getting the chance to actually play its campaign in full has taken the shine away as a result of bland design and dependence on funneling players down uninventive corridor combat. 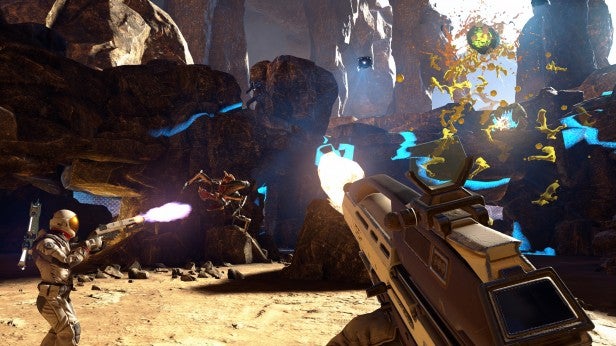 It’s important to note that Farpoint does combat and sound design well. The enemy types offer great variety and are also often terrifying in the way they attack you. There’s one arachnid in particular that has consistently led me to scream in absolute fear, and it’s the smallest and – supposedly – least deadly of the lot. The smallest spiders in the game are able to crawl towards you at lightning pace, before stopping a few feet away, then leaping at your face. They can even burrow underground to hide from your shots and pop up right next to you.

Imagine all this presented in VR, and you’ll understand the reason I’ve screamed like a little girl so often.

Sound design, too, is excellent. Playing with headphones, I’m able to locate exactly where enemies are by noise alone. Hearing enemies crawling to the left or right of me has sometimes meant the difference between life and death, and has really helped locate some of the harder-to-spot crawlies – particularly in the darker caverns and caves.

Which brings me to my first issue with Farpoint: it’s ugly. Naturally, everybody has now become accustomed to the graphical compromises of virtual reality games, particularly on PSVR, but because of Farpoint’s scope and dull colour palette, this is even more apparent. The bland browns and greys make the environment uninteresting, and in darker environments, things can descend into a bit of a blur; and guns don’t come equipped with a flashlight. 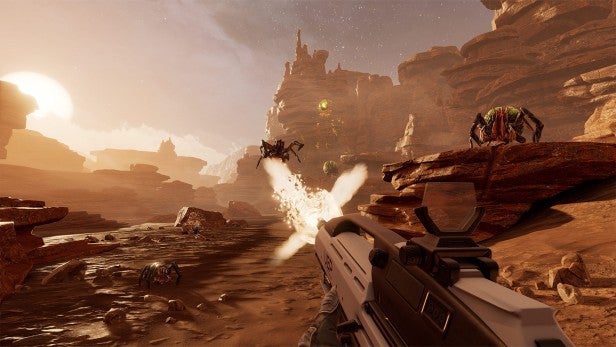 Also, the entire world of Farpoint isn’t particularly believable; it doesn’t feel lived in. Instead it feels like a series of glorified shooting corridors built for the player. Farpoint is set up as a harsh alien environment upon which you’ve crash-landed and must investigate, survive and – ultimately – thrive in. However, its linearity means there’s never much opportunity to discover anything about the world, and all you end up doing is walking forward, shooting stuff.

At points you’ll be able to scan digital holograms left by fellow survivors, but it would have been nice if I could use this ability to also scan these alien species I’m battling, just to learn more about this world – something that a scientist would actually do.

It doesn’t help that the storyline is incredibly boring and derivative, too, meaning there’s little – if anything – to get invested in within this setup. Ultimately, it’s a game saved by a controller making everything within it more enjoyable.

Farpoint is a dull first-person shooter made enjoyable by a simply brilliant controller. The only reason to buy this game is to experience it with the Aim Controller, and I’m almost tempted to recommend that VR enthusiasts buy the bundle for the Aim alone. It’s simply that good.

It’s a real shame that Farpoint hasn’t delivered, however. PSVR is screaming out for another big-hitter to give early adopters something to dive into, but its short and uneventful campaign, weak design and dull visuals mean it won’t live long in the memory. We can only hope that future VR shooters take full advantage of the excellent Aim Controller.