Available on PS4 (version tested), Xbox One and PC.

Ubisoft’s Far Cry series has come a way since the initial release of its third instalment in 2012. It’s travelled from the snowy mountains of Kyrat to the hot, sprawling fields of Hope County, Montana. Heck, it’s even ventured into prehistoric times with wooly mammoths in Primal.

Now, with a remaster of Far Cry 3, we’re returning to where the modern formula began. But does it stand the test of time, and do the improvements make a revisit worthwhile? 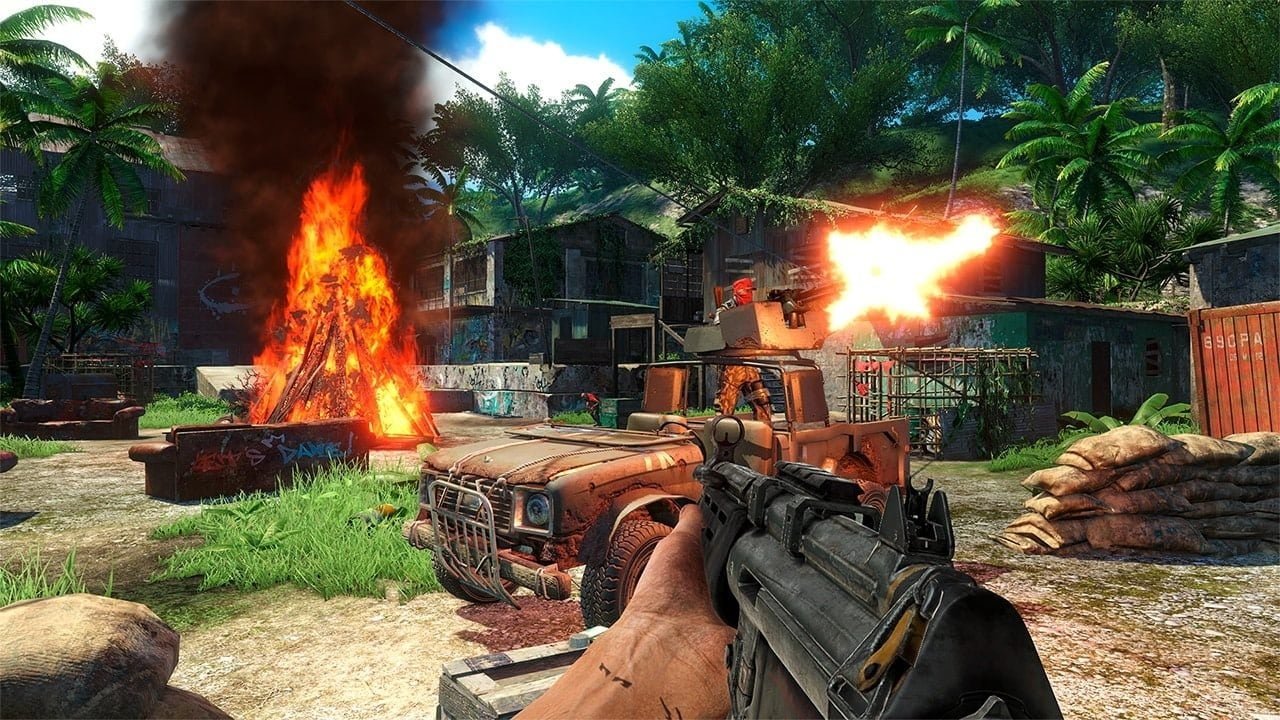 The core elements of 2018’s Far Cry 5 are alive and kicking in this remaster. Outposts, vehicles and a huge world ripe for exploration are present and accounted for. After a few hours, it became clear that the foundations of the series have hardly changed at all in the past five years. For better or worse, you’ll feel right at home with Classic Edition, if you’re at all familiar with Ubisoft’s first-person experience.

Set on a fictional archipelago known as The Rook Islands, Far Cry 3 is all about tropical beaches and dense, dangerous jungles brimming with wildlife. It’s a beautiful setting, acting as a charming tribute to the original Far Cry, while simultaneously introducing a formula with which we’re now all too familiar.

You play as Jason Brody, an obnoxious dudebro who finds himself captured by pirates, following what appears to be an outrageous gap year. After his brother is killed, Jason is forced to adapt and survive by any means necessary.

It’s convenient that the locals are willing to help out, while also bearing a formidable grudge against the pirate menace polluting their lands. They provide Jason with new abilities from their ancestors, manifested in Far Cry 3’s extensive skill tree.

This is the bulk of the narrative, a pedestrian affair fueled by a tremendous villain in the form of Vaas Montenegro. He’s insane, dispensing a litany of monologues that delve into the complications of modern society and how Jason should accept the murderous icon he has become. It’s tremendous to watch, but one dimensional in a way that felt lacking in 2012, let alone six years later.

Fortunately, once you look past the underwhelming story you’re met with a first-person adventure that’s aged incredibly well. Partly because it hasn’t really changed. Aside from sorely missed elements – such as the grappling hook and wingsuit – Far Cry 3 maintains the combination of running, gunning and hunting of which I’m so fond of the series. Yes, it doesn’t feel as smooth compared to new entries, but some elements feel better than what was seen in Far Cry 5.

For example, stealth feels like a legitimate avenue for tackling the entire journey. Jason can slither through outposts and story missions, taking down enemies unaware. Upgrades allow him to chain attacks until an entire room can be murdered with the silent touch of a button.

Far Cry 5 abandoned this notion, with enemies magical noticing you with no real indication of what you did wrong. It’s strange to be praising an older title for surpassing its successors, yet stealth in Far Cry 3 remains a benchmark still to be surpassed.

Gunplay is a different story. Jason’s repertoire of illegally sourced weapons are surprisingly limited, and you can’t carry more than two until additional upgrades are earned. Every category of firearm has only a handful of variants, although you can spice them up with attachments to fit your play style.

Purchasing them with funds earned from missions feels pointless. Climbing towers and taking over outposts results in all manner of weapons being doled out for free, throwing the virtual economy into a tizzy as everything feels lost cause.

Jason’s arsenal throughout Far Cry 3 is nothing to be sniffed at, but sadly, the pace of its progression feels at odds with the core narrative. Even before reaching the third act, I had unlocked the majority of skills and crafted most of the items available to me.

Considering the simplicity of Far Cry 3’s formula, there isn’t a lot of room for experimentation in the later encounters. I rarely felt compelled to see things through to the end now I’ve seen how Ubisoft has expanded upon the formula in the recent years. That being said, I might have just spent too long grinding instead of dealing with the task at hand. 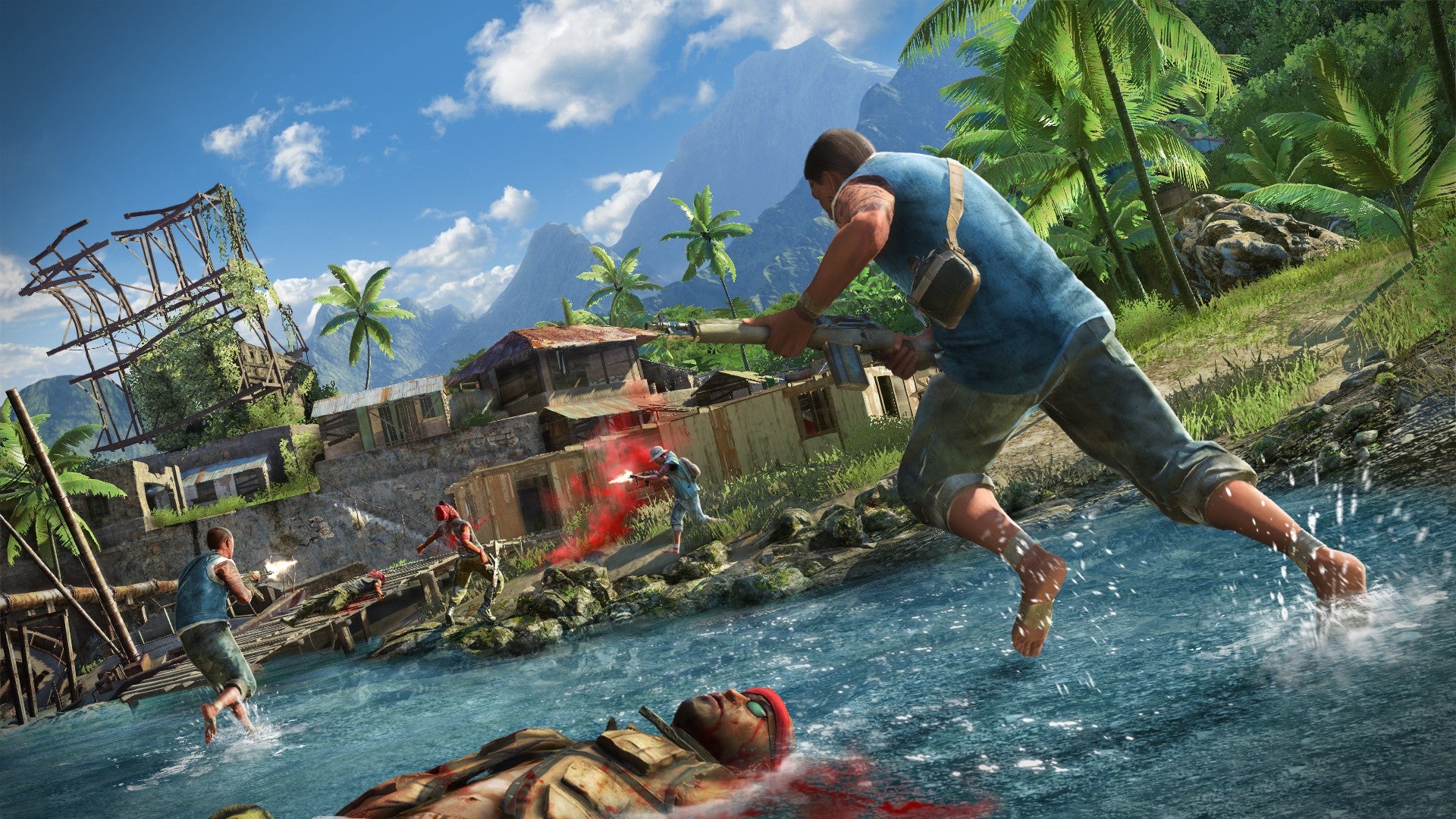 When you aren’t trying to usurp pirates across The Rook Islands, you’ll be partaking in side activities such as hunting challenges, checkpoint races and assassination missions spread across the open world. By today’s standards, they’re predictable and seldom worth the rewards – unless you’re after every achievement or trophy.

One big exception is hunting challenges where you’ll need to kill a legendary animal. Doing so results in rare crafting ingredients that you’ll definitely need, and earning them feels genuinely rewarding. I would have loved for Ubisoft to implement a few extra challenges into what is, essentially, a glorified PC port.

Graphical upgrades are minimal, aside from the resolution bump on Xbox One X and PS4 Pro. The user interface hasn’t been touched at all, leaving some elements to feel evidently archaic. Don’t go into Classic Edition expecting something along the lines of Resident Evil 2 Remake or Shadow of the Colossus. The bare minimum has been done here to bring Far Cry 3 into the modern generation.

Far Cry 3 still offers damn good time, and the Classic Edition is a great way to revisit Ubisoft’s influential classic or dive into it with fresh eyes. The tried-and-tested formula has advanced in recent years, leaving some aspects of Far Cry 3 to feel aged and inconsiderate, which could be too high a hurdle for newcomers to overcome.

Not a huge amount of effort has been put into remaster either, which translates the original PC experience onto consoles with a helpful boost in resolution and performance.

If you’re an owner of Far Cry 5: Gold Edition, this comes as a very tempting freebie. Otherwise, there isn’t really enough here to warrant a revisit.