Generally, Blood Dragon works, both as an action game and as an affectionate, slightly one-joke nostalgia trip. It’s relatively short length isn’t too much of a problem given the low, download-only price tag. However, it has a minor problem in that, as an action-packed, streamlined Far Cry 3, it really needed to be all killer, no filler. Unfortunately, it’s not.

The missions are the biggest problem. Too many take place in similar-looking bases and laboratories, and neither the design nor the enemy AI are smart enough to make you feel like you’re seeing something new or really being challenged.

You also get ludicrously powerful by the end of the game, which is a lot of fun on one level but a bit unsatisfying on another. Don’t get us wrong; there are some superb stretches and a handful of inspired set-pieces – particularly towards the climax – but this isn’t always Far Cry at its best. 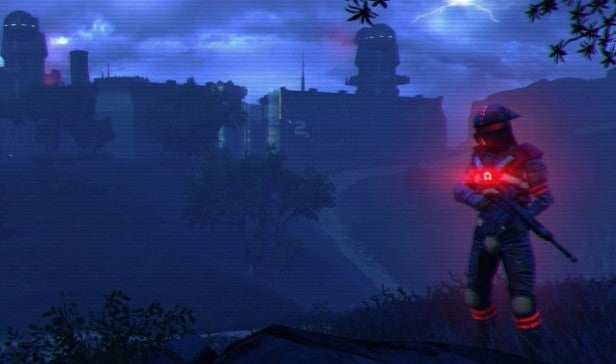 Visually it’s not all that stunning either. Far Cry 3’s sunshine, sea and jungle aesthetic made the most of a pretty stunning engine, but Blood Dragon’s continual darkness and overblown neon pinks don’t really do it justice, and neither do the generic troops, dull interiors or poorly-modelled dragons. It’s hard to say whether the B-grade look is intentional in a Tarantino’s Grindhouse way or not, but it certainly doesn’t always look good.

Meanwhile, there is something a bit juvenile and limited about the humour. It’s hard to suppress a chortle at some of the insults, abuse and post-fatality one-liners, but some of the repeated lines get stale pretty fast, and the swearing loses impact with exposure – even with the rudest word in English trotted out. What’s more, your mileage will probably vary depending on your memories (if any) of the eighties and the movies and video games of the period. 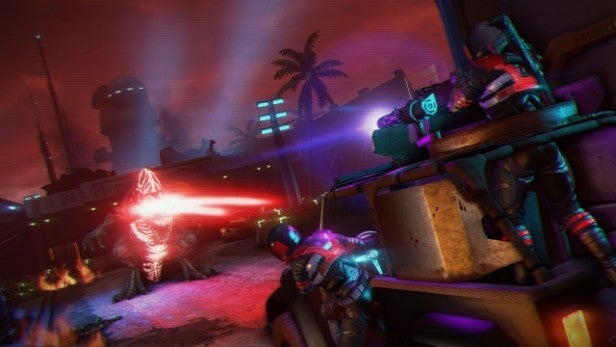 Far Cry 3: Blood Dragon – The Power of the Remix

In other words, you might play Far Cry 3: Blood Dragon and split your sides, or you might find the whole thing leaves you unexpectedly cold. All the same, it’s great to see such a big-name publisher taking risks on this level, putting out a spin-off game that doesn’t simply rework the assets and throw in a couple of new weapons, but that takes the game in a whole new stylistic direction.

Please, developers of the world, give us more along the same lines. Stop the endless riffing on the same Hollywood blockbusters. Look outside other games for inspiration. Bring us the B-movies of yesteryear. Bring us 1930s serials, fifties sci-fi, sixties art movies and seventies exploitation. Only, make it a little more consistent and brilliant next time around.

Far Cry 3: Blood Dragon isn’t quite as brilliant or hilarious as it thinks it is, and the seven hour running time sees the joke and the gameplay stretched fairly thin. It’s foul-mouthed, gratuitously violent and sometimes shabby looking. Yet it’s still a lot of fun, with some fabulous gung-ho action, an excellent soundtrack and a clutch of fantastic one-liners. At the end of the day it’s a lovable direct to video game at a lovable direct to video price, only the most po-faced misery guts wouldn’t find it entertaining.