If you’re an avid gamer then you will be all too aware of the never-ending quest to find the ultimate performance from every aspect of your computer. Whether it be the CPU, graphics card, headphones, or monitor, each individual component of your rig takes careful consideration to decide if it is up to the task. And nowhere is this more crucial than in deciding what device you use to convert your precise hand movements into on screen action. Yes, the title of ultimate gaming mouse is once again being challenged, this time by a newcomer.


Today we’re looking at the Fanatec Headshot controller from the relatively unknown German company, Endor AG. It produces a range of gaming peripherals including alternative PlayStation and Xbox controllers and it also has a couple of unique products that combine the functionality of several peripherals into one hybrid product. It’s one of these hybrids that we’re looking at today. 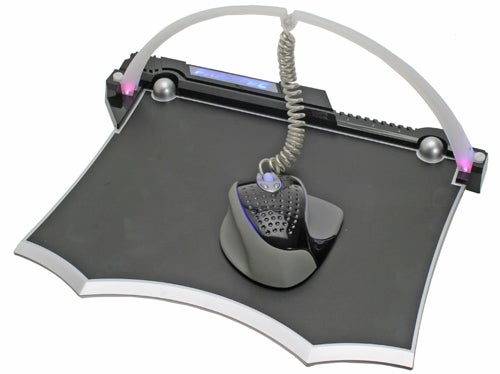 The Headshot controller is the combination of the Controller mouse and the aURa gaming surface – which features an integrated USB 2.0 hub. They’re both apparently manufactured using no less than Germaneering, so it’s got to be good! Honestly, that’s what it says so on the website. It offers a number of unique features and innovative ideas but with an asking price of £79.99, it costs more than the best mice from the likes of Logitech, Microsoft and Razer who, between, them are universally recognised as producing the best gaming mice available. And with the twenty pounds or so you save by buying one of their mice you can also go and buy yourself one of the top gaming surfaces by companies such as Ratpad, Everglide, etc. All of which means the Fanatec Headshot has a lot to live up to.


As the Fanatec is a complete kit, it comes with its own carrying case for easy transportation to and from LAN parties. It’s made from a clear plastic that lets you show off all your goodies inside. Unfortunately, it just looks a bit of a mess with stickers and cardboard inserts everywhere and, frankly I wouldn’t be seen dead carrying it around – give me a plain black case any day. The case’s problems don’t end there either as the hinges are made from bent plastic, rather than using a proper pivot joint, so they are likely to fail very quickly. Overall, it’s just not worth the added clutter of keeping the case. So, not a good start. 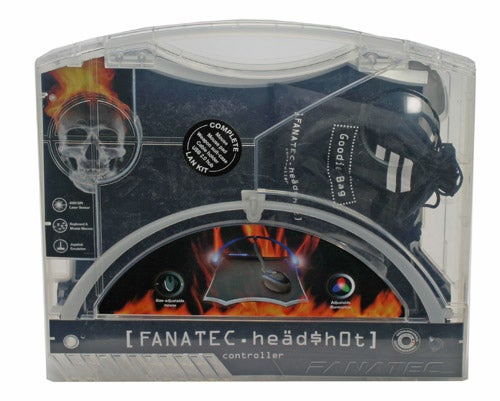 Opening the case up, you certainly get a comprehensive kit of parts. There’s the mouse, the gaming surface, a power supply, the cradle for holding the mouse wire (I’ll come back to this shortly), a USB cable, some spare PlasmaGlyde feet (Teflon pads to you and me), a little bag to hold all your spare bits in, and… a bottle of MOUSE BLOOD!!!! That’s right these guys are so serious about their gaming that they’re willing to sacrifice mice just to gain that performance edge.*


Putting the device together is pretty straight forward and there is a clear quick setup diagram included in the box to guide you through the process.


”* Obviously I was just kidding. It’s just some red oil-based lubricant for your gaming surface.”

So, what’s the deal with this thing then? I hear you ask.


Well, the key feature of the Headshot is that the aURa gaming surface integrates a cradle that arches over the back of the surface – think new Wembley stadium – that the mouse is then attached to by a coiled wire. The idea is that this prevents the possibility of snagging your mouse cord on something while you’re fragging away. We’ve all been in the situation where you think you’ve got someone in your sights, then, just as you move in for the kill, you suddenly find your mouse cord has got trapped under the edge of your keyboard or monitor and you find you can’t reach the shot. Anything that can prevent these occurrences is worth a look in our book. 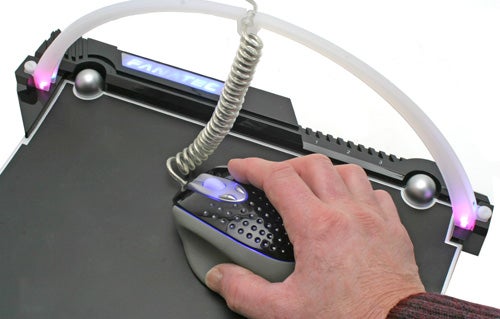 Thankfully the system works surprisingly well and, like so many simple ideas, you’ll find yourself saying ‘Why didn’t I think of that?’ What would be extra specially brilliant is if the mouse was actually modular and you could use the same sprung cable to attach whatever mouse you like onto the device. Of course, this would require that your favourite mouse used the same modular design and quite frankly it’s not likely to happen. We can but wish though.


The arch isn’t the only innovative aspect of the Headshot though. It also has an integrated USB hub that, if you connect the included power supply, can power hi-power USB devices like external hard drives. One of the three USB ports is taken up by the mouse so it’s effectively only a two port hub but just those two ports are enough to be very useful.

The finish of the pad is a hard rough plastic like that of a Ratpad, though it is a finer grade of roughness. It is quite slick but I’ve certainly used better and, like all hard mouse mats, it is quite noisy in use. The Mouse Blood lubricant helps quite a bit but then using a lubricant would help out any surface. At 6mm thick, the mat is thicker than many but the curved and bevelled front edge makes it quite comfortable to use, even after prolonged periods.


The mouse uses a laser for tracking and features a resolution of up to 4,000dpi, which is adjustable on the fly. The sensor is only actually capable of measuring 2,000dpi so the highest setting is just an artificial sensitivity boost. This is an infuriating example of marketing spin because, not only is it not true, it is also completely pointless. I didn’t find a single application for which this level of sensitivity was useful. Which is a shame because overall the mouse was very accomplished and I was able to be just as competitive, while playing Counter-Strike, as with any other mouse. I found I quickly became used to switching resolutions mid fight depending on what weapon I was using and what situation I was in. However, I found I used only a couple of sensitivity settings at all. Not necessarily because the other settings were too high or low but simply because I found it was too difficult to adjust between too many setting variations at once. 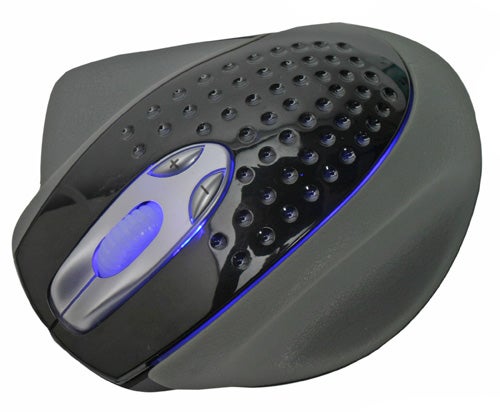 Size is always a factor when purchasing a mouse and particularly with a mouse like this one that is contoured to fit the shape of your hand. With this in mind Fanatec has chosen to allow a degree of adjustability and you can widen the mouse by turning a couple of large screws on the bottom and sliding the left hand side out. I can’t say I found either setting noticeably more comfortable than the other but that’s perhaps because I tend to hold the mouse with the tips of my fingers rather than rest my whole palm on the device. The rubberised grips on the left and right sides ensured my grip was always secure. Finally, this mouse is for right-handers only and there is no word from Fanatec of a left handed version.

Along with the usual left/right click buttons and scroll wheel functions, the Controller has two additional buttons above the scroll wheel, which are your usual back/forward buttons, and two below it that are for adjusting the sensitivity. At first it was a bit peculiar to not have any thumb buttons but I quickly got used to using my middle finger for all these additional duties. 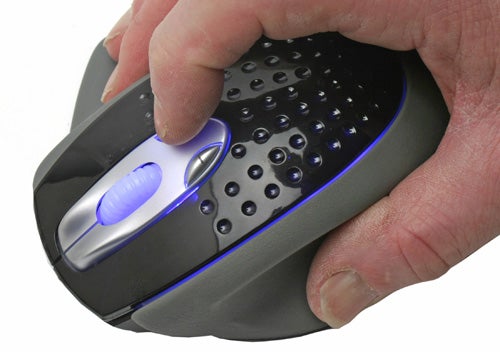 Both the mouse and either side of the arch feature separately controlled trios of red, blue, and green LEDs. The colour, brightness and flashing speed of each group can be controlled by the included software. So, if lights are your thing then you’ll be mightily pleased with the Headshot. I however, just turned them all off. All, that is, except for the illuminated Fanatec logo, which is permanently on.


The driver adds a tab to the Mouse Properties menu in Control Panel that enables you to control the mouse’s advanced settings. The first page of options includes lighting, resolution, and sensitivity settings – the vertical and horizontal sensitivities can be set independently enabling superfine control of the mouse’s movement. The more advanced options enable you to assign macros to various button clicks and combinations so that buy scripts can be activated by a single click, for instance. 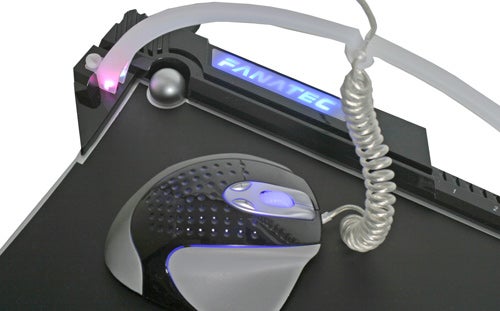 Up to this point I’ve avoided making an issue of the design of the Headshot because I didn’t want it to detract from its technical capabilities but I can hold my tongue no more. The Headshot is ugly! The silly flashing lights everywhere, the cheap materials, the random lumps and bumps, it just looks and feels like a cheap kids toy. Maybe I misjudge the general gaming public but am I not right in thinking that no one over the age of twelve is going to buy this? Again, it’s a shame because the Headshot actually performs pretty well.


The Fanatec Headshot is an innovative product that performs quite well. However, for the same price you can get one of the best gaming mice available along with your choice of top gaming surface and you’ll have a combination that beats it on performance, looks, and, build quality. The arch and the USB hub are useful but they don’t do enough to raise the Headshot above the competition.